Amish and Mennonite Groups in the Big Valley

The Big Valley of Mifflin County (also called the Kishacoquillas Valley) is notable for its variety of Amish and Mennonite groups. John A. Hostetler, a renowned sociologist and scholar of the Amish who grew up in the Big Valley, called this area "one of the most diverse expressions of Anabaptist-Mennonite culture anywhere in North America." This region, approximately thirty miles long and four miles wide, is home to no less than twelve different Amish and Mennonite groups—all of which are derived from one original Amish settlement. These groups range from some of the most integrated and liberal Mennonites to arguably the most conservative Old Order Amish sects in North America.

The Amish first settled in Mifflin County in 1791 when several families from Lancaster County purchased land in the Big Valley. They enjoyed relative prosperity and by 1800 there were 50 Amish households in the area. The early nineteenth century was a time of relative harmony, with the population of the settlement growing through immigration from southeastern Pennsylvania. By the 1840s the Big Valley congregation had grown so large that it had to be divided into three districts.

The first split in the Big Valley Amish was precipitated by the 1849 "silencing" (meaning a removal from ministerial duties) of Samuel B. King, a controversial Bishop from the middle district, by his own congregation. King had warned against adopting the use of rubber tires on buggies and was also accused of giving sermons that were too long, an act that was regarded as overly prideful. This split was actually the culmination of decades of mounting tensions over disagreements about the level of acceptable integration into society. While the upper and middle districts sided with King's congregation, the lower district sided with King and cut off contact with the other two districts, beginning a trend towards conservatism in this branch. 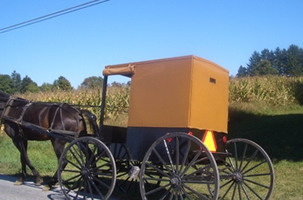 Amish America
Members of the Byler Amish Church, one of the most conservative Amish sects in the country, have earned the nickname "yellow-toppers" because of the roofs of their buggies.

The Byler Amish Church, also called die Alt Gemee (the Old Church), is descended from the Samuel B. King split. This sect, the smallest of the Old Order Amish groups in the Big Valley with 3 congregations, is often distinguished by the yellow roofs on the buggies of its members, earning them the nickname "yellow-toppers." They dress conservatively, although the men are allowed to wear colored shirts. Women of this sect generally wear brown bonnets. Tractors are used for belt power, but not for field work. Screens on doors and half-length curtains are allowed in homes, while carpets are not allowed. 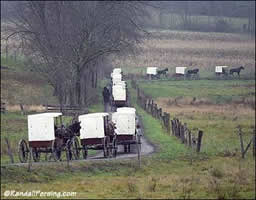 In 1880, dissension within the Byler Amish led to the founding of the Nebraska or Old School Amish, which Hostetler called "the most traditional of all Amish in the New World." The name Nebraska refers to Yost B. Yoder, an Amish Bishop from Nebraska, who helped the group get started. The Nebraska Amish, who are the largest and fastest growing group in Mifflin County, are also called "white-toppers" because the fabric they use for buggy roofs is not dyed. Men wear white shirts, brown trousers, gray coats, wide-brimmed hats, and hair covering the ears. Belts and suspenders are not permitted. Houses and barns are left unpainted.

The women wear long dark dresses. The Nebraska Amish are one of the few Amish groups that do not allow women to wear bonnets. Screens, curtains, and carpets are taboo for this group. The Nebraska Amish are divided into no less than three separate groups. The Yoder and Zook groups split after a 1933 dispute over the use of projecting roof gables, while the Zook group split again in 1978.

The Peachey or Renno Amish, also called "black-toppers," are the least conservative Old Order Amish group in Big Valley. This group still conforms strictly to the rules and customs of other Old Order sects such as shunning, but distinguishes itself from other groups in Big Valley with more relaxed rules about dress and home decoration. Men are allowed to wear one suspender and women wear black bonnets. Homes are painted white and barns are typically red. Carpets, half-length curtains, and screens are commonly found in homes. Indoor plumbing is also permitted by this group. 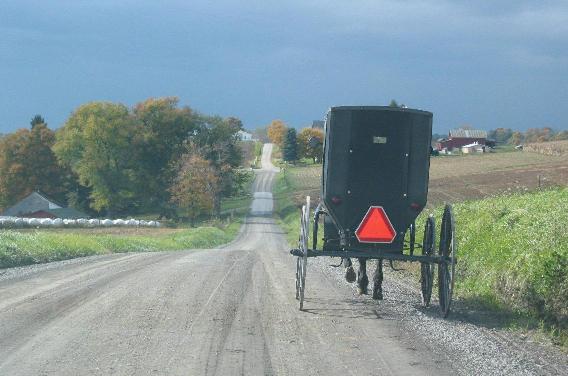 Indian Tree Farm
Although some sects have become more open to liberalization and integration with society, many still choose to live simply on their ancestral farms.

The Peachey Amish arose out of a conflict between the upper district bishop, Abraham Peachey, and the middle district bishop, Solomon Beiler, in the 1850s. Beiler was one of several Amish Bishops at that time that had begun to baptize his congregation in streams rather than homes, a practice that did not sit well with Peachey, who preferred the traditional method of house baptism. In 1861, when it was clear that the conflict could not be resolved, the two districts cut off fellowship with one another, with Peachey's group becoming the Peachey Amish.

The group that followed Beiler became the Allensville and Belleville Amish-Mennonites, who eventually became Mennonites. Other Mennonite churches have sprung up after divisions and controversies over the years. These groups run the gauntlet from the conservative Beth-El Mennonite Church (founded in 1973), which emphasizes plain dress and does not affiliate with any national Mennonite organizations, to the progressive Maple Grove Mennonite Church (founded in 1868), which was among the first Mennonite congregations nationally to support sending members to college and does not discourage integration with society.

The Valley View or "Speicher" Amish bridge the gap between the Old Order groups and the Mennonites. The Valley View Amish (founded in 1911) are affiliated with the Beachy Amish of Somerset County, who allow automobiles, electricity in the home, tractors for field work, and two suspenders instead of one. This group also conducts services in meetinghouses rather than private homes, unlike almost all Old Order groups. They can also be distinguished by a more relaxed dress code. 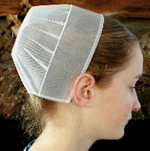 The variety of Amish and Mennonite groups in Big Valley is an interesting testament to the numerous debates that have surfaced over the two centuries after the original group arrived. This diversity illustrates how closely the Amish faith is tied into every aspect of life and how, historically, this group has been rife with internal disagreements. The use and non-use of certain types of dress, housing decorations, and technologies show the importance of cultural symbols to Amish (especially Old Order Amish) identity. While small details such as the color of a cloth, the length of a man's hair, or the color of woman's head covering may seem insignificant to outsiders, they are tangible markers of cultural and religious identity for these groups. Indeed, while the Amish may seem somewhat homogenous at first glance, a closer look at the abundance of cultural diversity in Big Valley proves otherwise.

This article was prepared by Jon Guss.