Up, Up, and Away! The Johnstown Inclined Plane 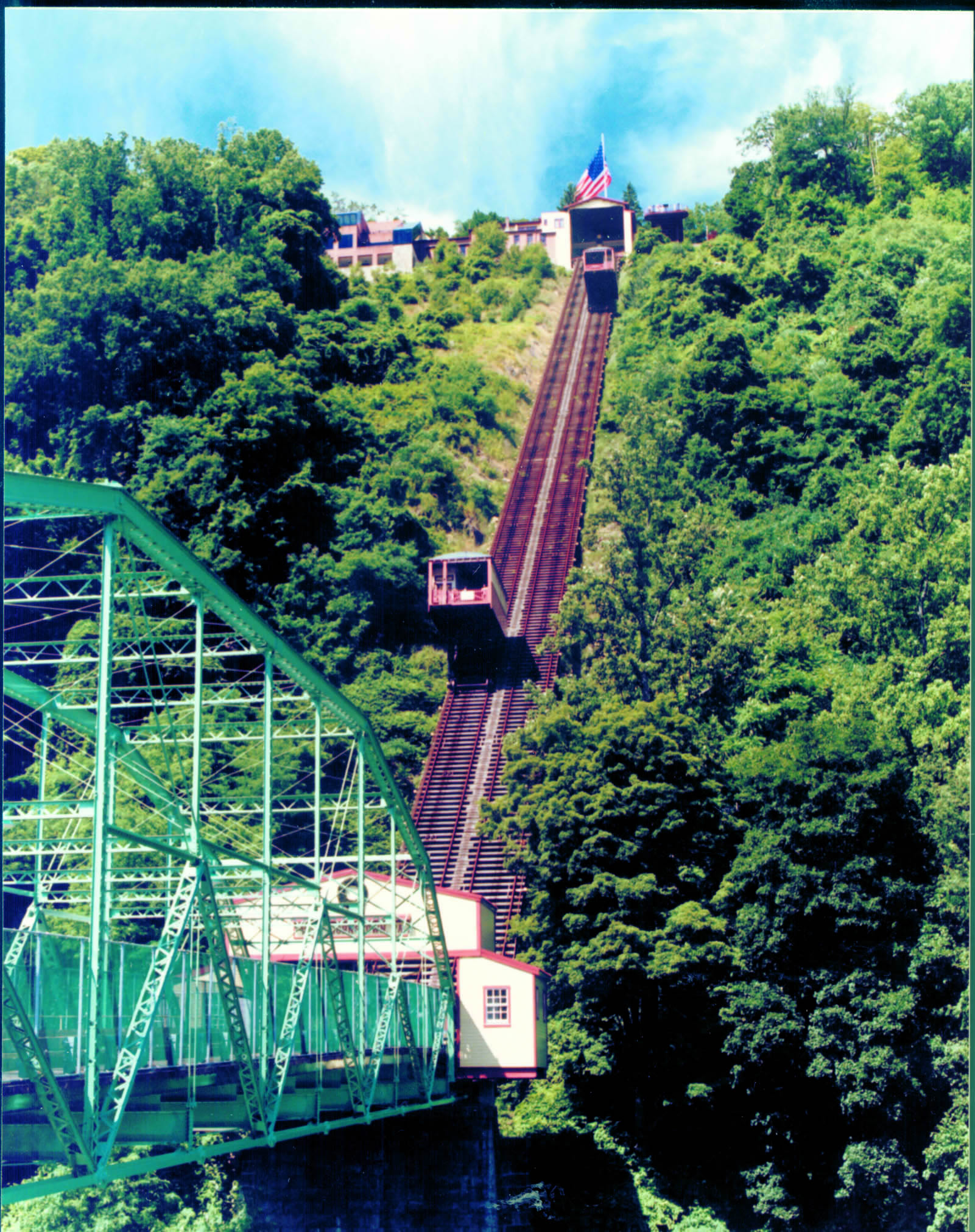 On May 31, 1889, a devastating flood ripped through the valley of the Conemaugh in Johnstown, Cambria County. After 50 to 60 foot waves claimed over 2200 innocent lives, Johnstown was left in ruins and in fear of another tragic event. One year later a solution came to answer the city’s biggest problem. The Cambria Iron Company began building what would become the World’s Steepest Vehicular Inclined Plane.

Samuel Diescher designed the Inclined Plane in 1890. The attraction stands 896 feet long and 503 feet tall. The structure is considered a funicular; two cars attached by cables on railroad tracks simultaneously move in opposite directions to counterbalance each other’s weight. In other words, when one car is travelling down the slope, the other car is moving up at the same speed, and the two cars pass each other exactly at the midpoint. Back in the early 1900s, the Inclined Plane was run by a steam engine. Today, with advances in technology, the cars are driven by a 400-horsepower electric motor. When the structure was originally built, a passenger car was attached underneath both rail cars. Since it is such a short ride to the top, the room was eventually removed, as it could not hold many people and proved to be useless. Each car is designed to carry a total of 15 tons worth of people, cars, trucks, and motorcycles. 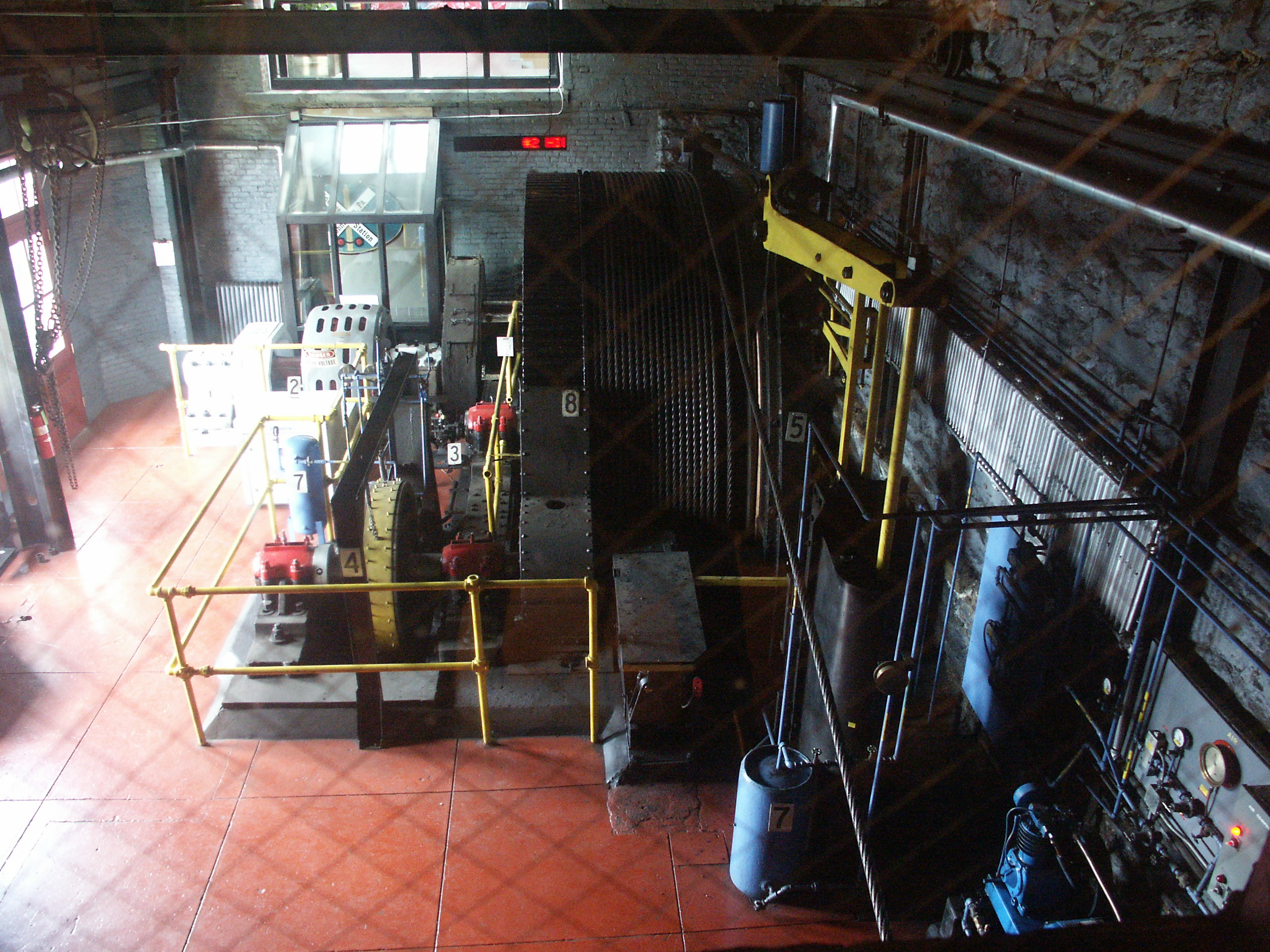 Jon Bell
The gears and cable in this room bring one car up the slope while letting another down it.

Eventually opening in June 1891, the Inclined Plane proved to be able to boost Johnstown’s dreary economy. After suffering $17 million in damages from the flood, the city needed an economic boom. Expanding into the surrounding regions proved difficult for the city as there were very few safe and structured roads in downtown Johnstown. The Inclined Plane allowed residents and workers to reach the top of Yoder Hill and to settle in one of the first suburban communities in America at the time, Westmont. With so many people having the ability to live and work close to downtown, the economy was able to recover, and the steel mills were at their peak. Positioned at a mighty 70.9-degree slope, the Incline proved its worth many times throughout history. Floodwaters struck again in 1937. This flood was not as large or devastating as the 1889 Flood, but the Inclined Plane was ready to make sure disaster did not strike twice. During that flood, the funicular was able to carry more than four thousand residents to safety. The most recent flood of 1977 was the last time the Incline was used for safety purposes. In addition to rescuing people, vehicles, and personal belongings, the Inclined Plane took many trips carrying boats and emergency supplies to rescue workers waiting at the bottom. 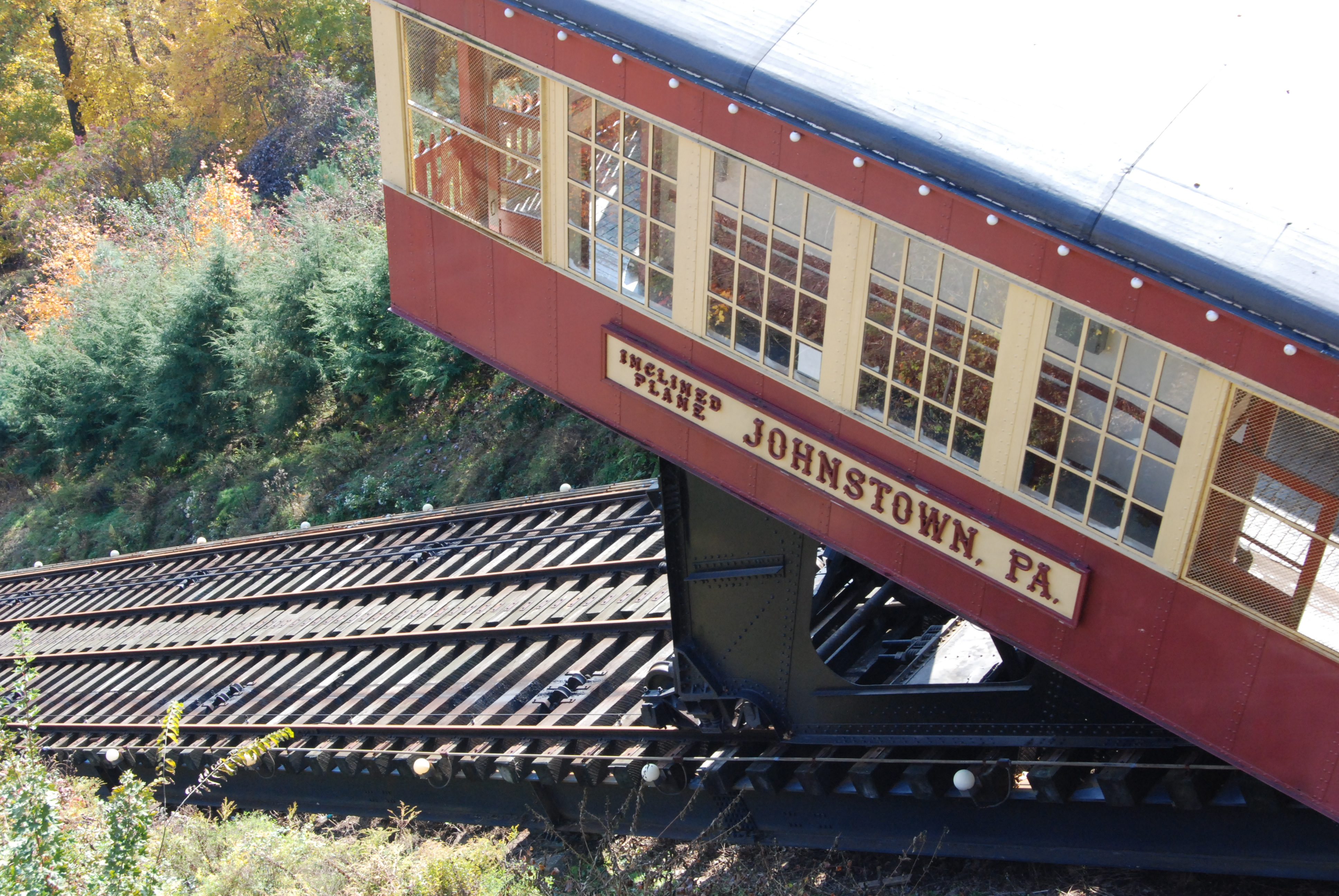 Alex Valentine
The cars on the Incline give comfort and an excellent view.

According to Kenneth C. Springirth in Johnstown Trolleys and Incline, the Cambria Inclined Plane Railway was the first official owner of the Johnstown Inclined Plane. However, when the Steel Mills begin to decline, Bethlehem Steel and Cambria Iron works could no longer afford to keep the Inclined Plane operating. Fortunately, before the 1936 flood, Westmont Borough purchased the Inclined Plane from Bethlehem Steel for $1. Two major roadways were eventually constructed after World War II around and up the side of Yoder Hill. When these roadways became more established, residents living in the Westmont suburb had no need to ride the Inclined Plane home. Ridership drastically decreased in number; therefore, the Johnstown Inclined Plane suffered a period of inactivity. However, the Cambria County Tourist Council saw the importance of keeping the funicular operating. They purchased the attraction from the Westmont Borough and opened it again for business in April 1962. After being in operation for almost 100 years, the Inclined Plane needed a serious upgrade in conditions. Unfortunately, the Tourist Council did not have the funding for repairs. The Inclined Plane was sold again to the Cambria County Transit Authority, which spent $3.5 million to rebuild the historic site in 1983. 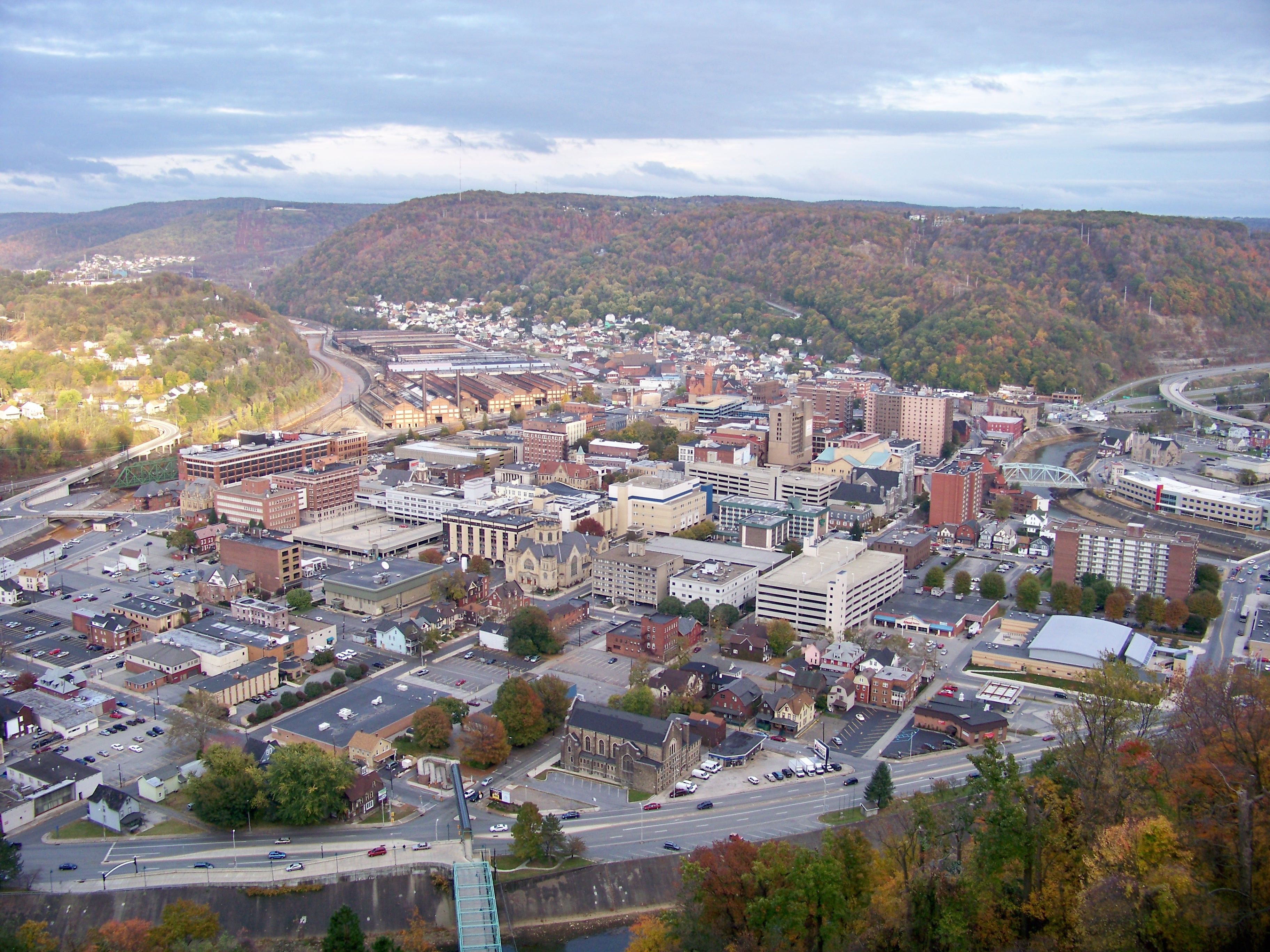 Jon Dawson
The view of Johnstown is unparalled from the Inclined Plane.

The Johnstown Inclined Plane has also helped attract tourists to the Johnstown area. Currently, tourists are able to drive their vehicle over a small wooden bridge that stands above the Stonycreek River. At the foot of the bridge, a plaque rests to remind visitors exactly how high the waves were that came through the city. After riding to the top, tourists are able to stand at a small observation deck off to the left side of the entrance. Here there are benches and telescopes to give riders a chance to experience the city as a whole. The breathtaking view shows everything from the old Johnstown Steel Mills to the local churches and businesses that support Johnstown. The Cambria County Transit Authority also decided to add on a small ice cream shop and gift shop. Five years ago a local entrepreneur and business owner bought the old restaurant that sat next to the gift shop. The City View Bar and Grille was born. Inside the restaurant, tourists also have the ability to take advantage of dining next to panoramic windows that also allow visitors to observe the entire city while dining. Inside the restaurant, patrons also have the ability to stop by the engine room. In the main entrance, a large glass window gives more insight as to exactly how the Inclined Plane works. Every gear, wheel, rope, and piece is labeled with a small description of exactly what each part does. It gives every person a chance to stop and see what is happening behind the scenes of the marveling machine. When the Inclined Plane runs every 15 minutes, people inside the restaurant are also likely to feel a very faint rumble under their feet. This serves as a reminder to the diners who head to the windows to watch the funicular move. 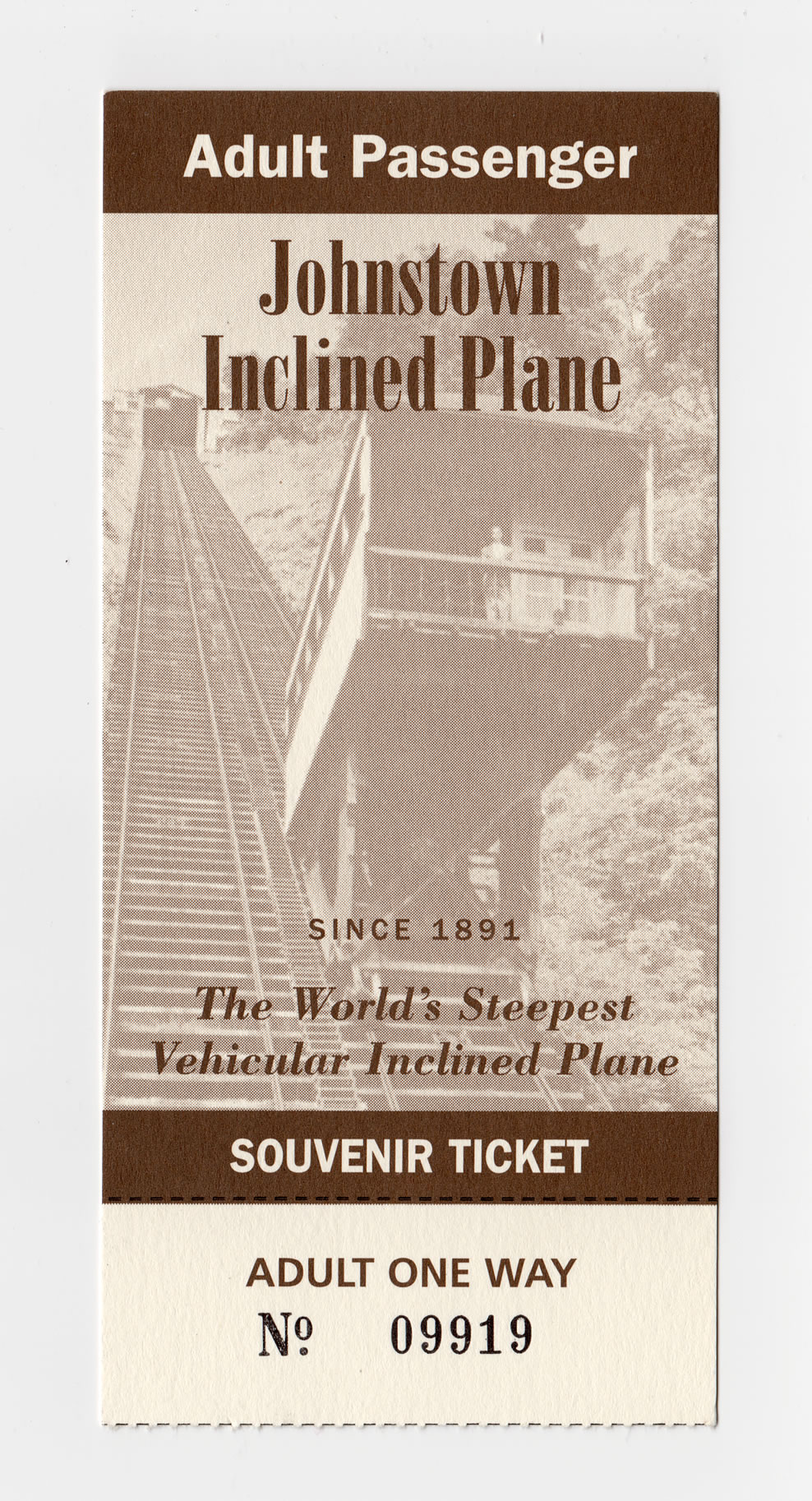 Despite being steep, visitors can also hike up or down the mountainside right next to the tracks of the Inclined Plane. Walking along the path, James Wolfe’s Sculpture Trail can be seen. This scenic route down the mountain includes artist James Wolfe’s steel masterpieces. Each piece was crafted by steel used from the old Bethlehem Steel Plant. This trail is home to the last known remnants of steel that came out of the illustrious mills. Above the Inclined Plane stands another important and proud landmark in Johnstown. One of the largest flags in America, waving at a magnificent 30 feet by 60 feet, rests atop the hill visible to anyone visiting the downtown area.

Every summer, various events like Thunder in the Valley and the Johnstown Music Festival take place in downtown Johnstown. Both of these events have proven vital to the economic success of Johnstown. More importantly, the Inclined Plane operates on extended hours during these events allowing more residents and guests to easily travel to the downtown sights. Riders are able to park their cars at the top of the hillside and ride for free to the bottom. Each year around 100,000 riders take the Inclined Plane to work or just go for a stroll with out-of-town guests.

Ever since its creation in 1890, the Johnstown Inclined Plane has proven to be a vital part of Johnstown’s history, heritage, and economic success. Many citizens owe their lives to the engineering wonder of its time. The Inclined Plane still proudly stands at the top of Yoder Hill. Visible to all people entering the city, it is a proud landmark for everyone born and raised in Johnstown, PA.

The Center wishes to thank Shelley Johannson of the Johnstown Area Heritage Association and Dr. Jon Bell of Presbyterian University for their assistance with this article.