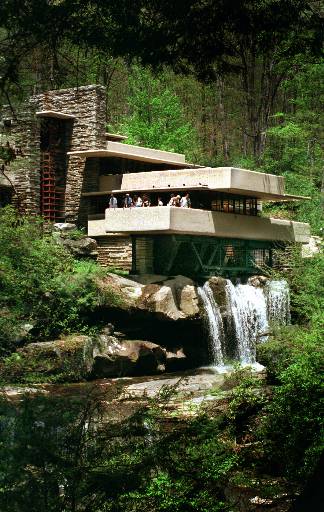 AP Archive
The exterior of Fallingwater.

Frank Frank Lloyd Wright, one of America’s most prominent architects, once said, "Every great architect is—necessarily—a great poet. He must be a great original interpreter of his time, his day, his age." Wright was one of his generation's great exemplars of that belief, and perhaps no building reflects that better than his Fallingwater house at Bear Run in Fayette County.

Fallingwater is often recognized as the world's most famous private residence and draws over 120,000 visitors annually. Over 2.7 million people have come to marvel at the house since it opened to the public in 1964. What compelled these visitors to make the long trip to rural Pennsylvania?

After leaving the Pennsylvania Turnpike, the chain restaurants, large hotels, and other hallmarks of suburban civilization quickly give way to rustic churches and ammunition shops, ultimately leaving only picturesque woods as one approaches the Fallingwater estate. Today visitors first come to a parking lot and modern visitor center. A short walk brings them to the purpose of their pilgrimage: a house perched defiantly over a waterfall, the most recognizable work of Frank Lloyd Wright.

Newcomers often remark at the sublime fusion of the house and the surrounding rock, flora, and cascades. A walkway provides a viewing platform from which one can stop to soak up the aesthetics. After his first visit, architectural historian Franklin Toker wrote that, "Here is one of the most photogenic buildings in creation. So is the Taj Mahal, but the two work so differently—the Taj Mahal so perfect in its balance, Fallingwater so restless that it looks like a living thing sprouting out of the rocks." That organic melding of building and environment was one of the primary goals during the design in 1935 and the construction from 1936 through 1939. Wright stated his own goals as satisfying the demands of the site and the needs of his clients, the Kaufmann family of Pittsburgh. Both became instrumental to the building's rise.

Edgar J. Kaufmann (E.J. Kaufmann) first came upon Bear Run in 1909. His father and uncle had lived nearby after emigrating from Germany, and the area became a base for their clothing business. That business had turned into a multimillion dollar department store operation headquartered in Pittsburgh by the time E.J. Kaufmann gained control. From his father and uncle, E.J. Kaufmann also gained a legacy of public architecture; the two generations contributed hospital wings, synagogues, and other buildings to Pittsburgh. E.J. Kaufmann assisted in the New Deal public works projects of the city, several of which were Frank Lloyd Wright commissions.

Before E.J. Kaufmann came along, various Masonic groups had already developed the land as small communities settled nearby. The area became a popular vacation spot for Kaufmann department store employees. The land and streams proved ideal for hunting and fishing, and rented houses and clubs provided comfort and entertainment. During the Great Depression, however, employees could no longer afford these luxuries. In 1933, E.J. Kaufmann bought the plot outright with plans to build a summer and weekend home for himself, his wife Liliane, and their two children. Toker noted that "the Kaufmanns used Fallingwater as a counterfoil to industry. Five days they would toil in the midst of Pittsburgh's pollution, then retire for two days in their unspoiled paradise."

The conventional wisdom among Fallingwater historians is that Edgar Kaufmann Jr., E.J. Kaufmann’s son, first put E.J. and Wright in touch while he was studying at Wright's Taliesin Fellowship arts and architecture center in Wisconsin. Toker disputed this account, saying E.J. and Wright conferred with one another long before. In any case, Frank Lloyd Wright had the plans on paper by December 1935, and construction began the following year.

The Kaufmann family had picked the location, but Wright asserted he had a picture of a home suspended over waterfalls long before he was ever contacted for the project. According to the Western Pennsylvania Conservancy, the group that now oversees Fallingwater's use and maintenance, Wright caught E.J. Kaufmann off guard with the plan to hang a house perilously over the Bear Run falls. The Conservancy records quote Bob Mosher, one of the architect's apprentices, as saying, "In the studio, Mr. Wright explained the sketches to his client. Mr. Kaufmann, a very intelligent but practical gentleman, merely said , 'I thought you would place the house near the waterfall, not over it.' Mr. Wright said quietly, 'E.J., I want you to live with the waterfall, not just to look at it, but for it to become an integral part of your lives.' And it did just that." However, Wright did not immediately convince his patron of the project's feasibility. The design principles that Wright would employ seemed unconventional. Cantilevered concrete trays, counterbalanced by the bulk of the home on land, would hold up the part of the structure over water. A nearby quarry would supply all of the sandstone needed for the walls, which joined boulders made of the same material underneath. The Expressionist architecture would forever join the home to the land. Wright had (and still has) the reputation of a brilliant architect whose attention to engineering details was sometimes lacking. The engineers attached to the project warned E.J. Kaufmann of the dubious structural integrity of the cantilevered terraces and the possibility of the house crumbling into the water. E.J. Kaufmann had the workers place additional steel reinforcements into the edifice as a concession to the warnings, but the Wright team and the mass of local construction workers forged ahead. Slowly, the house rose from the hillside. The construction of a guesthouse in 1939 signaled the completion of Fallingwater. Wright and E.J. Kaufmann, masters of publicity, trumpeted Fallingwater's completion through their media connections. The public marveled at the complete work; Wright had even handpicked the interior decoration to complement his work, complete with paintings and furniture from his own collection. All four levels harmonized with the natural surroundings in ways never before seen. The Kaufmann family vacationed in this airy and impressive atmosphere until the 1950s, when Edgar Kaufmann Jr. inherited it. In 1963, Edgar Kaufmann Jr. entrusted Fallingwater to the Western Pennsylvania Conservancy. Fallingwater continued to garner accolades and admiration in the decades after its completion. In 1991, the American Institute of Architects recognized it as the "best all-time work of American architecture." However, while the Kaufmanns had lived there with preservation in mind-- monitoring the cracks in the parapets and the movement of the cantilevers-- Fallingwater began to show its age. The terraces cracked and sagged at a rate beyond what was expected and showed no signs of stopping. The Western Conservancy undertook efforts to slow and reverse the deterioration as much as possible. 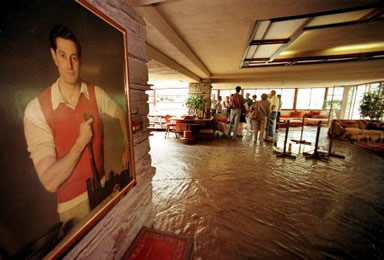 AP Archive
A painting adorns a wall inside Fallingwater.

The conservation agency's first major improvements included replacing the roofing and the original glass in 1981. An engineering student at the University of Virginia contacted the staff in 1995 with calculations of the burgeoning structural problems, and an engineering evaluation was commissioned. The evaluation proposed structural repairs, which were approved by a 1999 peer review composed of noted architects, engineers, and historians. Temporary shoring was installed, and repairs to the reinforcements have since been made. Engineers have also installed improved waterproofing to prevent moisture penetration. These conservation efforts have ensured that future generations will be able to visit Fallingwater, Frank Lloyd Wright's last remaining, publicly open building in its original inception.

Fallingwater remains an iconic, uniquely American piece of architecture. Wright borrowed ideas from American sources, such as steps modeled after those of Southwest American Indians. Wright also heavily infused the surrounding Pennsylvanian elements into the concept. The Laurel Highlands wilderness provided many of the structural materials and much of the design inspiration. The building's profile against the rushing stream summons images of the Pittsburgh industrial mills that once churned a few hours away. Fallingwater embraces the region. Between Mill Run and Ohiopyle, just miles north of the Mason-Dixon Line, Fallingwater still balances faithfully over Bear Run.