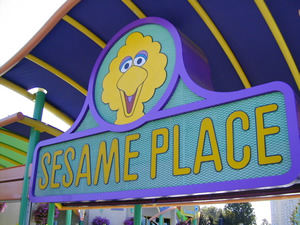 Like many major entertainment franchises in America, Sesame Street started small, but grew into a multi-million dollar household name. First, the highly successful children's television program debuted during the cultural upheaval of the 1960s. A little over a decade late, the show and its characters transitioned from the airwaves to actual physical reality with Sesame Place, where its most loyal viewers are invited to live and play with the furry friends they idolize on their television sets. That's faster than Mickey Mouse. Walt Disney created Mickey in 1928, but did not make the transition from the drawing board to life-size character until Disneyland opened in 1955.

Sesame Place is located near the Pennsylvania and New Jersey border in Langhorne, Bucks County. It opened on July 30, 1980 as a real-life adaptation of the fictional New York City borough featured on the daily television program Sesame Street, which made its debut on Nov. 10, 1969. Winner of 85 Emmy awards in four decades of programming, Sesame Street and the Children's Television Workshop has touched the lives of millions of young preschool and kindergarten-aged children by helping them to learn important early-life skills like counting and reciting the alphabet.

While technically a theme park, Sesame Place's mission statement to parents of young children is to "share in the spirit of imagination with your kids at Sesame Place - where you can experience Sesame Street together through whirling rides, water slides, colorful shows & furry friends. And where you'll discover that sometimes, the best part of their childhood is rediscovering yours." Sesame Place conveniently sits in between two major cities, Philadelphia and New York, and is easily accessible from the Boston and Washington, D.C. areas. In many ways, it is an unconventional theme park because it is not open year round. The park's many water-based attractions make it an ideal summer retreat for children in infancy up to 12 years old. The typical Sesame Place season runs from May to October. The park is owned by the Busch Entertainment Corporation, a subsidiary of Anheuser Busch, Co., which also controls other major theme park franchises like Busch Gardens and Sea World.

Sesame Street can be traced back to the vision of documentary producer Joan Ganz Cooney. Her idea was to create an interactive television program for young and underprivileged children entering pre-school. But her objective was not only to educate, but also to entertain her young viewers. With loveable characters like Big Bird, Elmo, Bert and Ernie, Cookie Monster, Grover and Oscar the Grouch, Sesame Street blossomed to enormous popularity with an estimated 8 million regular viewers in the United States and 75 million total viewers over 40 years. The show was not only an American phenomenon, but reached millions of children the world over. While Cooney handled the educational themes of the show, Jim Henson was hired to oversee the entertainment portion. His philosophy focused on short, amusing segments designed to teach and entertain the kids, similar to that of Saturday Night Live, but on a daily basis and for a much younger audience. Henson, an unknown puppeteer at the time, adapted his version of a life size puppet, which he called "Muppets," to this endeavor.

After a decade of success on television Sesame Street spawned a spinoff; not another television series, but a real-life playground for its younger viewers and their families. Sesame Place opened to the public in the summer of 1980. The price for admission on opening day was $3.95 a person. Nearly 30 years later, the price has climbed to $55.99 plus tax per person per day. What began as a three acre amusement park is now 14 acres (not including the 32 acre parking lot). As the Magic Kingdom at Walt Disney World and Disneyland are easily recognized by Main Street U.S.A., which represents a fictional town in mid-20th Century America, guests to Sesame Place encounter the full size replica of Sesame Street as soon as they walk through the gate. Not only that, but Big Bird, Bert and Ernie, Cookie Monster and everyone's favorite characters will be roaming the streets meeting park patrons. Sesame Place is not without fine dining and shopping either. The shop's products range from general souvenirs to personalized merchandise and photographs. 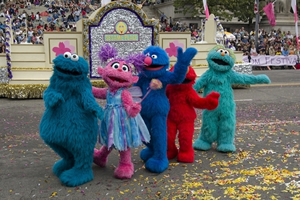 In keeping with its inspiration, Sesame Place continues the interactive educational activities from Sesame Street into real-life adventures. Three current programs, specifically targeted at toddlers, focus on mathematics and journalism. "Mystery, Math and Monsters" invites youngsters to play detective in a scavenger hunt setting in the hopes of improving their problem solving skills. "Hot off the Press" gives kids a chance to head up their own fictional newspaper. Aimed at kindergarten and grade schoolers, the program lets them roam throughout the park and at the end of the day, design their very own publication with their stories. In "Sesame Place Preschool Adventures," participants are given a booklet of suggested activities that teach them about the alphabet, shapes, musical tunes and much more.

Some of the more popular venues like the Sesame Food Factory try to provide a rich yet healthy menu for both kids and adults. Favorites like hamburgers are flame-broiled and French fries are baked at Ernie's Café. Salads are prominent along with whole-wheat pizza. And unlike other major theme parks, bringing picnic food is permitted. The Sesame Studios offers two distinct areas of play. For kids who love video games, there are over 50 computers waiting for you to try. The difficulty is indicated by the specific age target sticker found on each game. Science buffs can also check out 20 different exhibits such as, "Pedal Power." This bicycle demonstrates how pedaling can produce vast amounts of electricity. As Bill Nye the Science Guy would say: "way cool!"

A few years ago, a Washington Post columnist, Jennifer Frey, took her daughter, Ryan, on their annual pilgrimage to Sesame Place. At the time, Ryan was five years old. When they left after two days, Ryan asked her mother why they could not live there. Frey wrote shortly after: "We usually go sometime in late July or the thick of August, when the summer heat is at its worst and the idea of spending two days drenched by a water slide or dancing in a fountain has obvious appeal to kids and adults." The Freys enjoyed many of the park's signature rides, water pools and parades. "Sky Splash," the giant raftlike tube ride that is crowned at the top of its six stories with an eight-foot-tall rubber duckie. We've learned from experience that this is the park's most popular attraction." 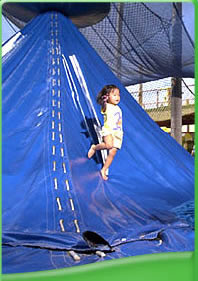 For a little bit more relaxation, "Big Bird's Rambling River" is a slow-moving ride in an inner tube, a common ride in water parks across the country. Up for a challenge? The "Monster Maze" is an old fashioned boardwalk funhouse fitted with several rows of lightweight punching bags. The idea is to position the bags in such a manner to find the way out of the maze. But be careful because the bags have a mind of their own and will reposition themselves quickly! Ever wanted to scale a mountain or go rock climbing? "Cookie Mountain" is a giant blue cone-shaped apparatus that dares youngsters to ascend to its summit. However, most find themselves slipping and sliding back to the start, all for laughs and fun. "Everything here is geared toward kids. We come here a couple of nights a week, and I don't have to worry about what my kids are going to see. It's not the same at other parks," said Karen Ehrgott, a Bucks County resident, in a 2005 interview, with her two children, Madison, 4 and Zachary, 2.

Sesame Place has never attempted to be the biggest nor the finest carnival. Their niche is being the seasonal alternative. "The park strives to offer a holistic play experience, one that brings together the physical, social and emotional interaction of play," said Robert J. Caruso, its executive vice president and general manager, in a 1988 interview. Caruso has remained at his position to this day. The success of Sesame Place has helped to stimulate the economy of the surrounding area. "When you look at all the new hotels, restaurants and stores in the area, it's in great part due to Sesame Place," said Clark Shuster, president of the Lower Bucks County Chamber of Commerce. "Many of them wouldn't be there if it weren't for Sesame Place," Shuster said. During its peak, Sesame Place welcomes an estimated 10,000 people per day. They allocate 1,500 seasonal positions each year to high school and college students from the area. The park's revenue was a modest $650,000 in the '80s but has nearly tripled in twenty-five years to be in the ballpark of $1.5 million in 2005. For 2009, Sesame Place is unveiling its "biggest attraction yet." The "Count's Splash Castle," opening in 2009, culminates every concept made for the park to date. It will be primarily a water-based and "multi-leveled" attraction. In 2011, Sesame Place debuted two new attractions, “Elmo’s Cloud Chaser” and the “Neighborhood Street Party.” “Elmo’s Cloud Chaser” invites riders to travel with Elmo up into the sky. The “Neighborhood Street Party” is a parade that will be like a neighbrhood block party on Sesame Street. 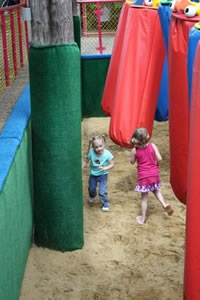 Sesame Place may only be open six months a year, but they take full advantage of that time. They offer three different annual "passports" ranging from $76 to $150. The benefits, depending on which deal selected include among other things: free parking, preferred seating at select shows, a 50% discount at other Anheuser-Busch-owned theme parks and unlimited riding of attractions. In the interests of its customers, Sesame Place is a non-smoking facility. Moreover, should a day at Sesame Place be cut short because of adverse weather conditions, tickets can be exchanged for a free one redeemable on any day throughout the remainder of that season.

Sesame Place and Sesame Street continue to function as a top venue for youngsters to explore their childhood, run and play with the characters they dream about every night (and perhaps sleep with) and learn something all at the same time. Sesame Street is without a doubt, the most successful children's programming in the last half-century and with the success of Sesame Place, will continue to educate the children of these children, who watch and travel to this happy place, far into the twenty-first century.