Battle of Lake Erie: Turning Point of the War of 1812 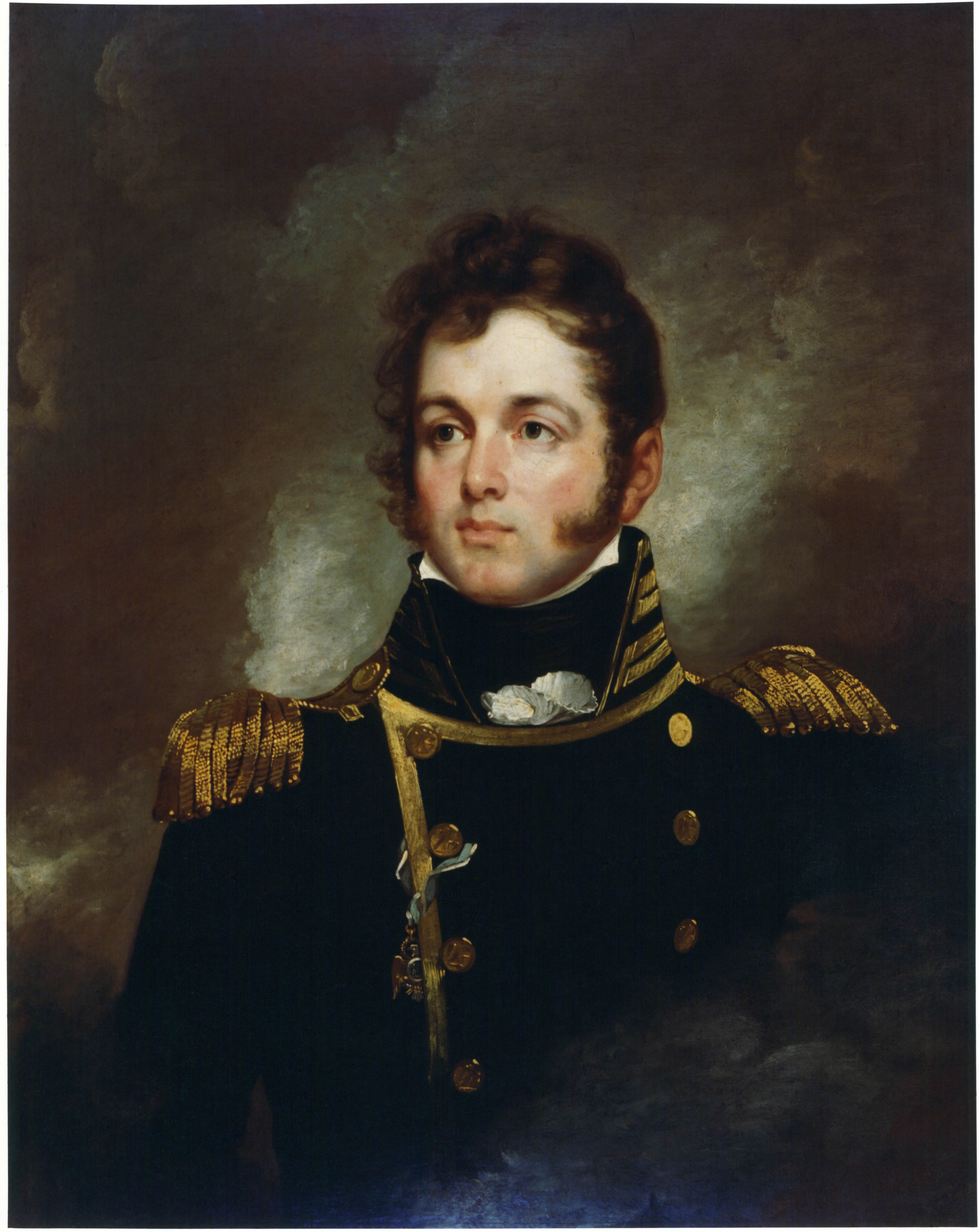 Billowing smoke enveloped the battling ships, obscuring the results from the spectators standing on shore only a few miles away. Samuel Brown, one witness, later remarked, “The spectacle was truly grand and awful. The firing was incessant for the space of three hours ...” On September 10, 1813, the American navy under command of Master Commandant Oliver Hazard Perry defeated the British at the Battle of Lake Erie. This victory was an important part of the War of 1812 because it allowed America to gain control of Lake Erie, preventing the British from penetrating the middle of the United States. Before this triumph, American troops had suffered multiple defeats at the hands of the British and, as a result, their morale was diminishing.

When the War of 1812 was declared in June, the U.S. was poorly prepared for military or naval campaigns. The hostility of the British and some Native American tribes required the U.S. to send military forces into the Michigan Territory. American General William Hull, an inept leader, took over this expedition. He surrendered Detroit to British General Isaac Brock along with the entirety of the Michigan Territory. The concession of these territories opened up the whole northwestern frontier of Ohio, as well as northwestern Pennsylvania, to incursion by the British and their Native American allies.

The surrender of Detroit on August 16, 1812 was a harsh blow to the Americans. President James Madison realized the significance of reclaiming the lost territory and recognized that it was necessary to control Lake Erie as a crucial line of communication and trade. The British fleet’s occupation of Lake Erie threatened supply lines and a decrease in adequate roads for the transportation of American troops. The lake was also an important strategic defense because of possible British invasion from the North. The Great Lakes and the St. Lawrence River offered avenues of assault if the British controlled them, making Lake Erie a vital link in America’s plans to win the war. 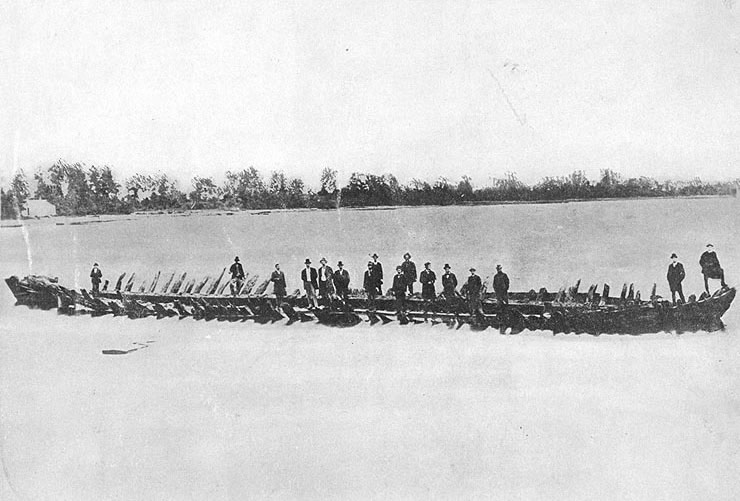 Naval History and Heritage Command
The Lawrence suffered great damage in the battle. Here, she is seen after being raised in 1875.

Once President Madison recognized the value of Lake Erie, he ordered the construction of a fleet. The U.S. Navy Secretary appointed Captain Isaac Chauncey as Commodore of the Great Lakes. Master Commandant Perry was chosen to command the Lake Erie fleet. When the Americans arrived at Erie, there was no American fleet at all while the British already had eight vessels. Daniel Dobbins, Perry’s shipwright, chose Presque Isle (modern day Erie) as the construction site because of the restricted entrance to the harbor which would keep the squadron safe from attack. The naval construction was a complex process to begin in 1813. At this time, Erie was a small village with no industrial capabilities and Perry had to acquire materials from elsewhere. Yet, by August, Perry had nine ships, the brigs Lawrence and Niagara being the largest.

Early in the morning of September 10, 1813, Perry got word that the British were advancing to attack the American fleet. The British commander, Robert H. Barclay, led a squadron of six vessels towards Perry’s squadron of nine. The battle lasted from 11:45 A.M. until 3:00 P.M. At 11:45am the Detroit, the British flagship, started firing on the Lawrence. The Lawrence suffered considerably as she bore down on the enemy. It took 20 minutes for Lawrence to get in range to return fire. Lieutenant Jesse Elliott, captaining the Niagara, failed to engage the British. Tristam Burges, author of The Battle of Lake Erie, wrote that the Niagara was supposed to engage the Queen Charlotte at close-range, but instead Elliott ordered his lieutenant to cease firing with the carronades and fire with the long twelves only. Since the Queen Charlotte could not reach the Niagara with her carronades, she went to the aid of the Detroit and helped to destroy the Lawrence.

Without the Niagara fighting alongside it, the Lawrence was engaged in battle too far away for other vessels to come support it. During this time the enemy’s fire was directed almost exclusively at the Lawrence and for more than 2 hours the Lawrence took heavy damage until it was completely disabled. The other ships that could were engaging from long range, but they could not divert any of the fire from the Lawrence. President Theodore Roosevelt, in his book Naval War of 1812, commented that “the Niagara, the most efficient and best-manned of the American vessels, was almost kept out of the action by her captain’s misconduct.” 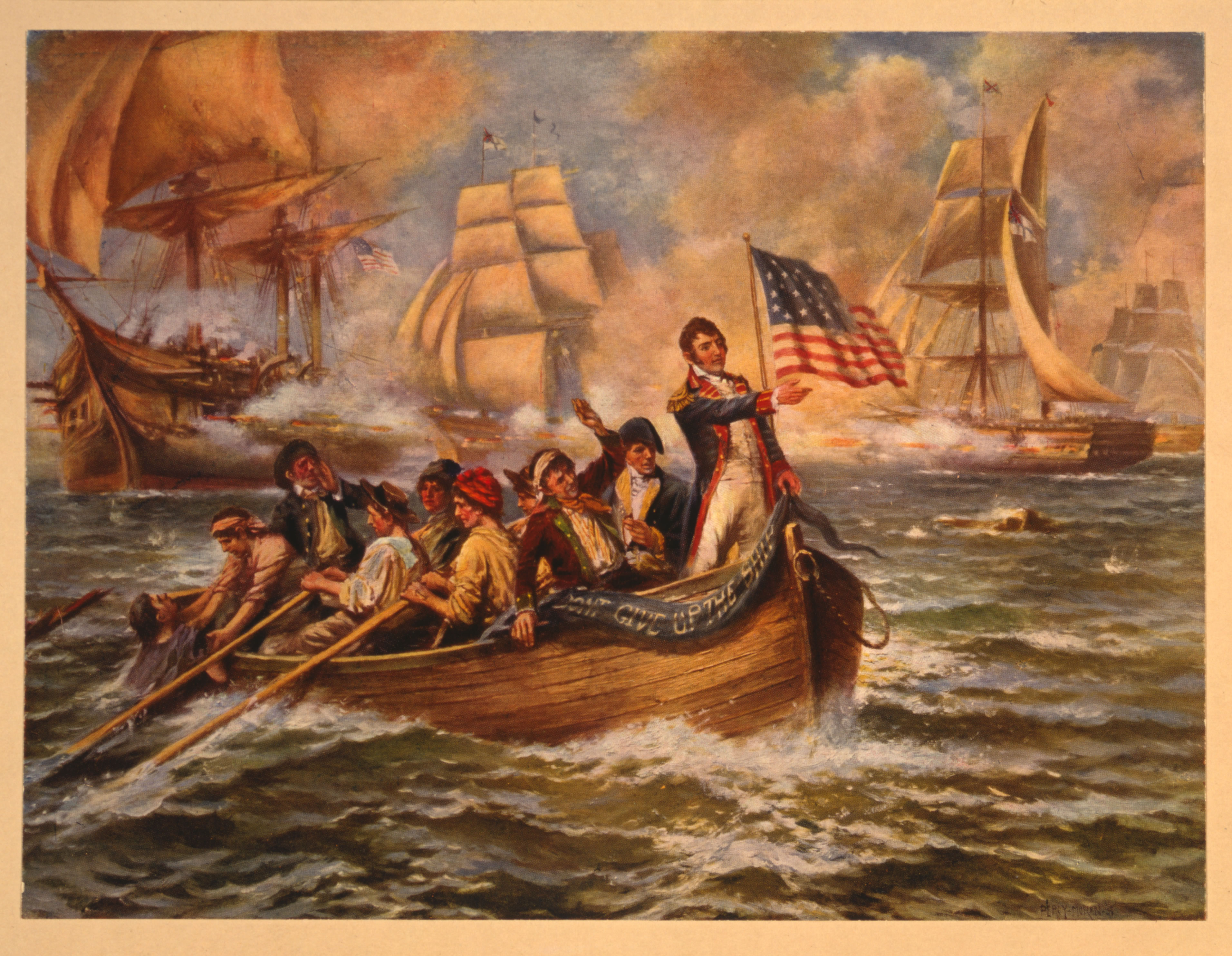 The fight went on at long range between the other ships. Three British ships, Lady Provost, Queen Charlotte, and Detroit, were almost destroyed. British Commander Barclay was so severely injured that he had to quit the deck and leave his ship in command of Lieutenant George Inglis. On board the Lawrence, over eighty percent of the crew were already killed or wounded. The first lieutenant of the Lawrence, Yarnall, was wounded three times but faithfully remained on deck.

Perry had to quit the Lawrence because of the extreme condition of the ship. Once Lieut. Elliott finally brought the Niagara forward, Perry transferred his flag and boarded the Niagara. Perry sent Elliott to bring up the gunboats trailing behind. There was little resistance as Oliver Perry took the Niagara and broke the crumbling British line and forced the Royal Navy to surrender. As the Niagara approached, the British ships attempted to prepare themselves but amidst the chaos two of the ships collided. Perry took advantage of the disorder of the British and fired upon them. The American gunships had caught up by this time also and were able to provide support for the Niagara and help decimate the remainder of the British fleet.

A little after 3:00 pm, a white flag was raised on the Hunter. Some boats tried to escape but were captured by command of Lieutenant Thomas Holdup. Master Commandant Perry transferred back to the Lawrence, determined to receive the British surrender on the original flagship. After the surrender of the British fleet, Oliver Hazard Perry, commander of the American fleet, dispatched one of the most famous messages in military history to Maj. Gen. William Henry Harrison. It read: “Dear Gen’l: We have met the enemy, and they are ours, two ships, two brigs, one schooner and one sloop. Yours with great respect and esteem. O.H. Perry.” On the Lawrence, 22 men were killed and 61 were wounded, while the Niagara only suffered three wounded men and two killed because of its absence from the majority of the bloodshed. 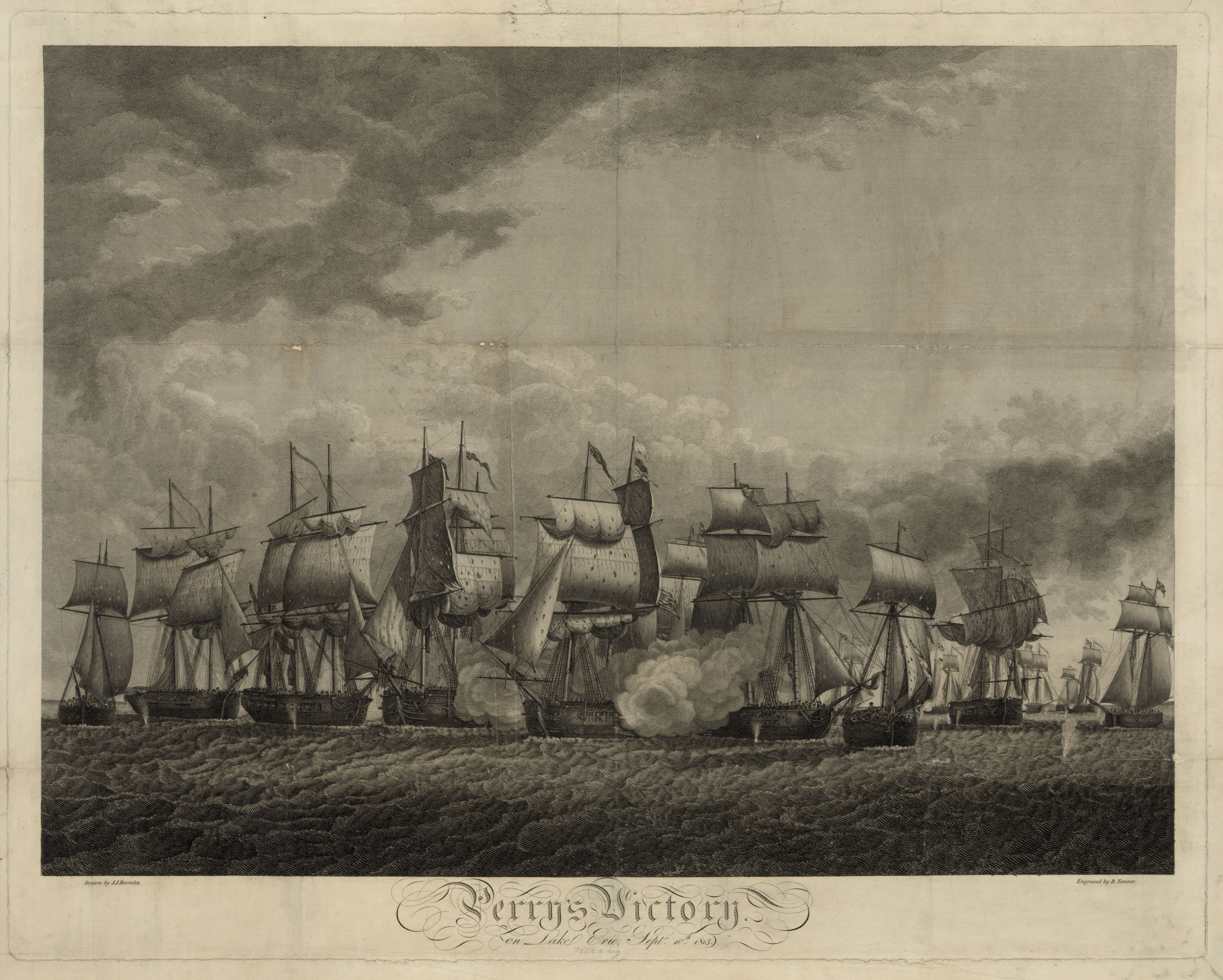 The English loss was more severe according to historian James Barnes. The English had 94 men wounded and 41 killed. Perry treated all the wounded equally, British and American. “Captain Perry has behaved in the most humane and attentive manner, not only to myself and officers, but to all the wounded,” wrote British Captain Barclay. His actions were admirable even after the action of battle was finished. Perry was promoted from Master Commandant to Captain after his victory. Perry and Elliott received gold medals from Congress. Silver medals were given to all of the commissioned officers.

The Americans’ decisive victory on Lake Erie crushed the British naval strength and elevated the martial reputation of the U.S. Navy. The Battle of Lake Erie also allowed America to retake much of the Michigan Territory lost earlier in the war, to relieve Ohio and Indiana Territory from Native American raids, and to participate in the destruction of the Tecumseh Indian confederacy. The victory made Oliver Hazard Perry a national hero and secured Lake Erie under American control. It gave the Americans a morale boost which was necessary following the previous string of defeats that the US had suffered. The Battle of Lake Erie was the first in a line of victories which secured America’s defense against the British. These triumphs inspired the American citizens with hope.

Before this victory, Americans were afraid of an invasion from the Northwest. The British had troops in Michigan, Ohio, and Canada, and were capable of launching an offensive at any moment. Theodore Roosevelt later wrote,

To the North we are still hemmed in by the Canadian possessions of Great Britain; but, since 1812, our strength has increased so prodigiously, both absolutely and relatively, while England’s military power has remained almost stationary, that we need now be under no apprehensions from her land-forces; for, even if we checked in the beginning, we could not help conquering in the end by sheer weight of numbers, if by nothing else.

The Battle of Lake Erie was an extremely important naval campaign because it boosted the morale of the American troops and gave them security from an invasion from the North. In the words of President Theodore Roosevelt, “The victory of Lake Erie was most important, both in its material results and in its moral effect. It gave us complete command of all the upper lakes, prevented any fears of invasion from that quarter, increased our prestige with the foe and our confidence in ourselves…” This victory affected the entire nation. It led to the eventual winning of the war in 1815 and triggered the events that caused America to finally free itself of Britain’s rule. “From the Revolution onward a basic aim of American statesmen had been to achieve freedom of action so that the United States could choose war or peace as its interests might dictate. With the settlement of 1815 this aim became a reality to a degree that the early statesmen had hardly dared to hope,” writes Harry L. Coles in his book, War of 1812. The victory of the War of 1812 granted the U.S. its freedom from Britain allowing it to flourish as an independent country. Without the victory on Lake Erie, this independence might have never happened and without Perry’s courage and kindness this victory might not have been secured. 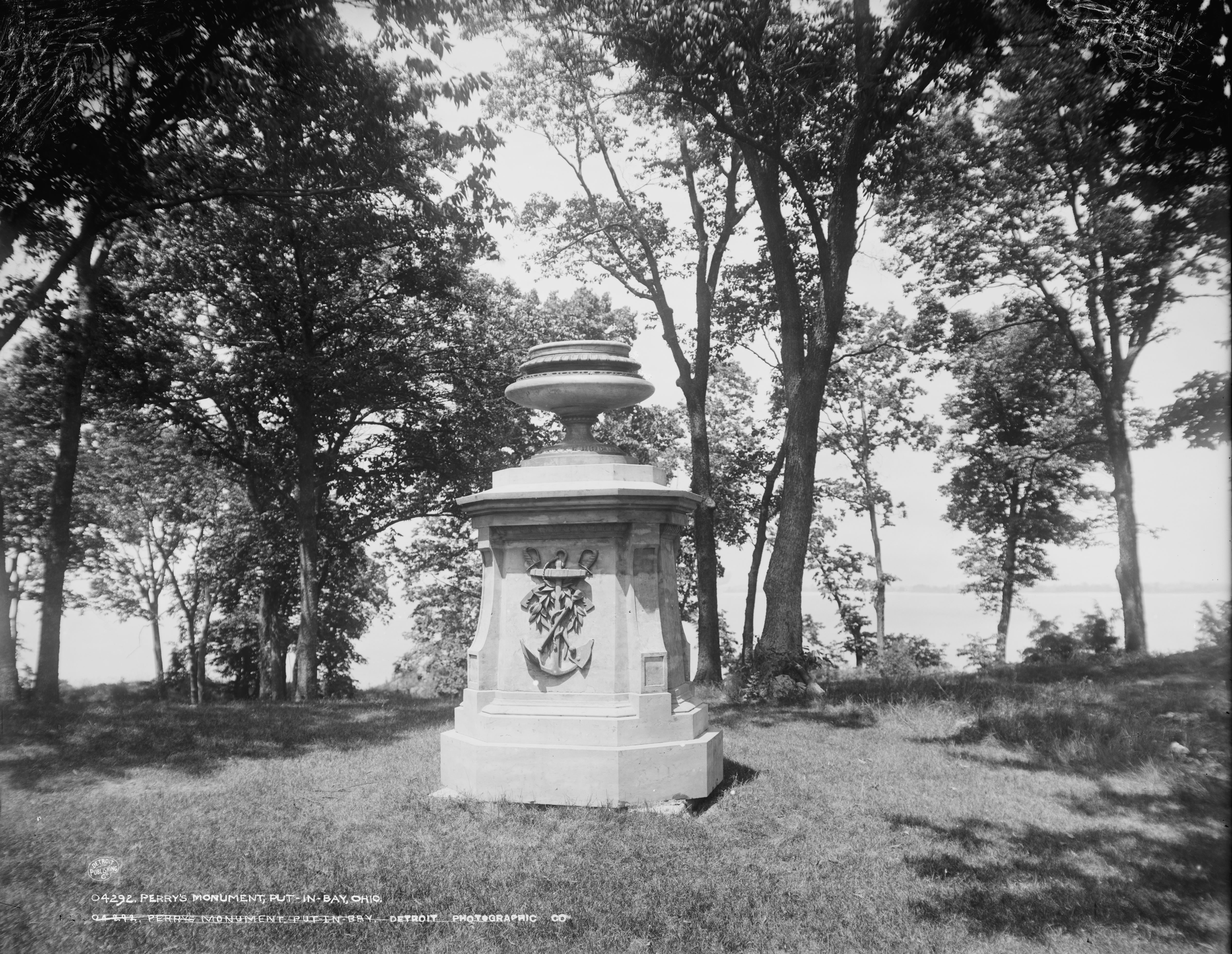 Detroit Publishing Co./Library of Congress
In the wake of victory at the Battle of Lake Erie, Oliver Hazard Perry was honored throughout the country, including this monument at Put-in-Bay, Ohio, the site closest to the naval battle.

“One hundred and seventy-five years after the event, we still look back upon the Battle of Lake Erie, which as naval battles go was a relatively insignificant affair, as a demonstration of human courage and ingenuity,” wrote W.A.B. Douglas in his essay, The Honor of the Flag Had Not Suffered: Robert Heriot Barclay and the Battle of Lake Erie. Even though the Battle of Lake Erie contributed greatly to the turning point of the War of 1812, the naval battle itself was relatively routine. The most outstanding parts of the battle were the courageous actions taken by the commanding officers. Perry fought on the Lawrence with the rest of his crew for over two hours in horrible conditions. Perry commented that, “In this situation she (Lawrence) sustained the action upwards of two hours, within canister shot distance, until every gun was rendered useless, and a greater part of the crew either killed or wounded.” Perry demonstrated himself admirably throughout the battle, setting of the final shot himself.

His courage and kindness over this encounter has been the cause of his resounding fame. The citizens of south central Pennsylvania named a county in his honor; memorials were erected in Trinidad, Rhode Island, New York, and Erie to honor the brave Americans who took part in the Battle of Lake Erie; their courageous actions resulted in the end of hostile relations between Britain and America.