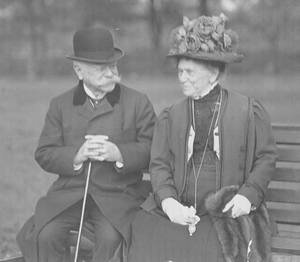 German papermaker Moritz Behrend had dreams of America for his three sons. Those dreams came true on June 25, 1898 when father and sons broke ground for the country’s first all-sulphite process paper mill on the shore of Lake Erie. The forty-six acres had been purchased from Erie’s prominent Reed family. Although paper mills were traditionally built in the backwoods, Erie was an ideal location as it offered ready access to water, trees, railroads, coal, and labor.  Further, it was ideally situated roughly halfway between Chicago and New York.

In May 1899, the mill, originally known as the E. R. Behrend Company, was incorporated as Hammermill Paper Company.  The name was an Americanization of Hammermühle, one of the mills that Moritz Behrend ran for one-time Prussian Chancellor Otto von Bismarck in the Varzin region of Germany. That site had originally featured a water wheel drop forge that the locals nicknamed the “Hammer” due to its thundering noise. After two years, Moritz resigned from Hammermill and entrusted the company to his sons. The youngest, Bernard, who was involved only with the start-up, went on to become a prominent electrical engineer who counted among his friends Nikola Tesla. An authority on the induction motor, he amassed over eighty patents by the time he took his own life in 1932. The remaining sons, Ernst and Otto, served as President and Treasurer, respectively, for the remainder of their lives. William Brust, husband of their sister Henriette, was also a long-time company officer.

At its inception, the mill ran only two machines: one produced bonds and the other tissue paper. Their first roll of manila wrapping paper was manufactured on December 1, 1899. When available watermarking systems proved too cumbersome for the mill’s fast-running, modern machines, Ernst and Otto Behrend patented a new device that would provide watermarks without tearing the fragile papers. They were also pioneers in establishing laboratory control and chemical testing of paper. In 1906, they installed super-heated steam Belmer bleachers, another paper industry first. 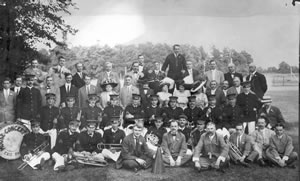 A further Hammermill innovation was a new system of marketing papers through agents. Traditionally, papers were sold through paper merchants each of whom required their own corporate watermark. The factory was producing paper with two hundred separate merchant watermarks, each one requiring changes in equipment setup and small runs. Ernst Behrend and salesman Norman Wilson imagined a new sales plan that involved a two-part system: watermarking all papers with the Hammermill name and marketing it nationally. Beginning in 1912, sales of Hammermill paper were made through a group of sales agents, many of whom met in Erie for an annual conference. The first national advertisement for Hammermill Bond, which ran in the May 11, 1912 issue of the Saturday Evening Post, kicked-off the marketing half of the plan.

Hammermill Paper Company also made great strides in employee relations. It was a pioneer in offering paid vacations and bonuses for hourly workers as well as sick and accident benefits, and in developing profit-sharing plans. Their employee magazine, the Hammermill Bond, was one of the first in the country, having published its inaugural issue in 1917. It included the tagline “Each one of us for all of us and all of us for each of us” and sometimes printed important articles in several of the key, native languages spoken by its laborers, including German and Polish. An annual Honor Roll ceremony was instituted in 1919 to recognize the accomplishments of its long-term employees and an employee credit union was established in 1951.

In 1903, Moritz Behrend transferred all of his shares to his sons. The remaining two-thirds were in the hands of German partners, many of whom were also involved in Varziner Papierfabrik, the joint-stock company that oversaw Hammermühle. In 1909, the German partners forced an exchange of stock by other Hammermill owners, leaving Varziner Papierfabrik as sole owner. The overseas ownership of the company led to many problems. Every improvement, including new machines and support buildings that were desperately needed, was vetoed by the German partners who were looking for maximum profit and minimum outlays. When Europe became mired in World War I, they became eager to divest. To avoid German taxation, the partners kept their shares in a London vault, a move which left them vulnerable to confiscation by the British. After much wrangling, Ernst Behrend was able to buy the company with help from the Chicago-based investment banking firm, A.G. Becker. On November 15, 1916, Ernst Behrend became majority owner of Hammermill Paper Company, making it a fully-American corporation.

The sale and its aftermath did not come without drama. Varziner shipped the stock certificates on the submarine Deutschland which set out for New York where the certificates would be exchanged for the gold that comprised the Behrends’ payment. Since the sub was classified as a warship and New York was a neutral port, they were forced to change course for Baltimore. Guards transported the gold to Maryland by land and the trade was made. In the spring of the next year, the United States entered the war and, under the auspices of the Trading with the Enemy Act, began seizing German-held properties. Although the sale had been legitimate, an anonymous letter writer convinced the alien property custodian that it had been a sham perpetrated by Varziner Papierfabrik to hide its continued ownership of the mill. The custodian demanded that all Hammermill stock be relinquished. After a protracted two-year battle, the alien property custodian relented and returned the company to the Behrends in May 1920.

Two decades later, World War II would also affect Hammermill. Under government orders, they closed some paper machines and shipped 660 tons of sulphite for use in manufacturing explosives. The limited paper they did produce was reserved first for any government use in support of the war. It was also the only mill in the country that owned the necessary equipment to make the fire-resistant, plasticized paper used in the fabrication of bazookas. The maintenance department pitched in by machining tools for other companies that manufactured guns and tanks. In a converted warehouse Hammermill carpenters were busy building the assault boats that were used in the crossing of the Rhine River. In partnership with General Electric, they designed and manufactured the Dura-Glo Cover for army weather balloons. Hammermill’s most sacred contribution to the war effort was in manpower: about four hundred employees served in the armed forces; fourteen of them never returned. 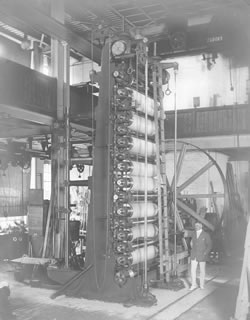 PSU Erie Archives
An unidentified employee poses with a supercalender, which smooths the paper so it has a uniform thickness and the oppropriate shows Behrend family patriarch Moritz Behrend and his wife Rebecca Wolf Behrend.

Ernst Behrend was not to witness his company’s contributions to the war effort. He died at his home on September 22, 1940, fifteen months before the bombing of Pearl Harbor.  Norman Wilson, who had started his career as an office boy in 1901 and who had helped brainstorm the revolutionary new agent-based marketing system, was named president in November. It was Wilson who presided over Hammermill when it became the first paper company to receive the Army Navy “E” Production award for “high achievement in the production of war equipment.” Master of Ceremonies for the event, Lowell Thomas, quoted from a plaque that the Behrends had installed in the main office building: “Hammermill has been built on individual enterprise, respect for the rights of others, law and order. These are the fundamentals of our civilization and the protection of our home.” Three years later the United States office of Civilian Defense awarded the company with a National Security Award in recognition of its efforts to insure plant security while it participated in the war effort.

The war years also saw a major change in the company’s relationship with labor when, in 1943, employees elected to join United Mine Workers of America, District 50.  The first general strike in company history was launched five years later and lasted less than two weeks. A second strike stopped production in 1957 and a third in 1970. Norman Wilson was named Hammermill’s first chairman of the board in 1953, after shepherding the company through a 1951 takeover attempt by New York pulp broker Sam Gottesman and witnessing it become the first Erie-based company to be listed on the New York Stock Exchange.

With Wilson’s promotion, Donald Leslie, Sr. stepped in as president. Leslie’s tenure would be a time of tremendous growth. The previous year Hammermill researchers introduced a new process called Neutracel which allowed them to become the first mill to see success in producing fine papers using hardwood in lieu of the industry-standard softwood. Leslie expanded the size of the corporation with the purchase of six of the nearly twenty companies Hammermill would eventually buy, including envelope manufacturers and lumber companies. Also in this era, a partnership with the Haloid-Xerox Company led to the creation of the first xerographic copier papers.

After a decade-long tenure as president, Leslie became CEO making way for new president John DeVitt, in 1963. DeVitt, like Norman Wilson before him, was the embodiment of a Horatio Alger story, having worked his way up in forty years from acid sampler to the executive suite. Under his leadership, Hammermill acted on a suggestion from the Industrial Development Board of Selma, Alabama that they retool the Riverside Plantation as a brown “kraft” paper pulp mill. Days after the project was announced in February 1965, Selma police jailed Martin Luther King, Jr. After protests erupted, Hammermill officials met with civil rights leaders and successfully assured them that the mill would honor its long-standing tradition of being an equal opportunity employer.

A new decade brought new leadership to Hammermill with the 1970 naming of Al Duval as president. Duval oversaw even more acquisitions for the company and steered it through a 1980 takeover attempt by corporate raider Carl Icahn. After thirteen years in the president’s chair, Duval became CEO and chairman in 1983 and was replaced by Donald Leslie, Jr., son of the former president. Leslie served only two years before being named chairman in 1985. W. Craig McClelland succeeded him as president. The next year the company managed to avoid a hostile takeover by California investor Paul Bilzerian, who led a group of investors that owned nearly twenty percent of the company’s stock. Later that year, International Paper Company rode in as a “white knight” buyer and purchased the company for 1.1 billion dollars.

Though the Hammermill name lives on as a product of International Paper, its association with Erie ended on May 17, 2002 when “Taps” was played on the last day of production at the Erie mill. Most of the buildings were razed the next year. It was a sad end for the proud company that had employed generations of Erie families for more than a century.