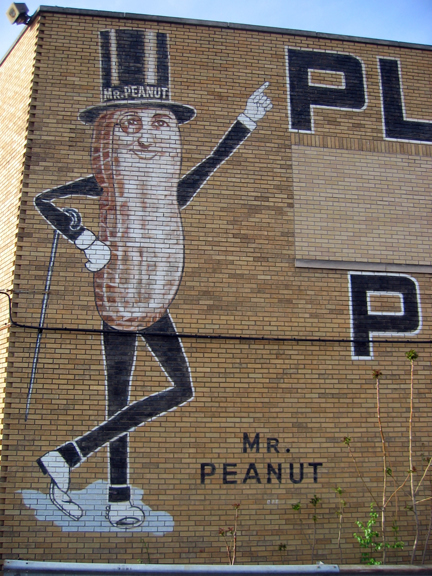 Frank H. Jump, Fading Ad Blog
Advertising icon Mr. Peanut was born in Wilkes-Barre. He is seen here on the back wall of the now-demolished factory building in Wilkes-Barre.

No one picked up Amedeo Obici, an immigrant from Italy, when he arrived in New York in 1895; yet, destiny lent its hand by leaving him with a $60 million operation. Obici founded Planters in 1906, the nut company with the ubiquitous and well-known icon, Mr. Peanut. Before Planters established itself as an important company, peanuts were not a significant product for consumers. However, with Obici’s excellent advertising skills and initiative, he established “Mr. Peanut” as the icon for the whole peanut industry and made them a soughtafter snack. Furthermore, as a result of Obici’s innovative character, consumers are now able to find a variety of Planters products from the shelves of convenience and grocery stores to baseball games. Once he started Planters, Obici rose from rags to riches.

Amedeo Obici immigrated to America when he was eleven years old. His father had passed away unexpectedly, and his mother was forced to sell the family business. His uncle suggested young Amedeo move to America to live with him in Scranton, and the boy learned English during night classes and worked during the day to save enough money for his family’s passage to America. Obici landed a job at a fruit stand in the Wilkes-Barre, Luzerne County area, and after saving enough money for his family’s passage to America, Obici decided to use his leftover savings to open his own fruit stand and to buy a peanut roaster. He developed a special way to prepare the nuts that took away the shells, and he dubbed himself “The Peanut Specialist.” Obici quickly realized that peanuts did not rot as quickly as the produce did, and this led him to the decision to invest more of his time in peanuts. He saw a lot of potential in selling them and in the sheer amount of nuts he could store, due to the peanut’s long shelf life. Eventually, he started to sell peanuts from a horse-drawn cart equipped with a whistle on it to promote his cart and attract more attention. 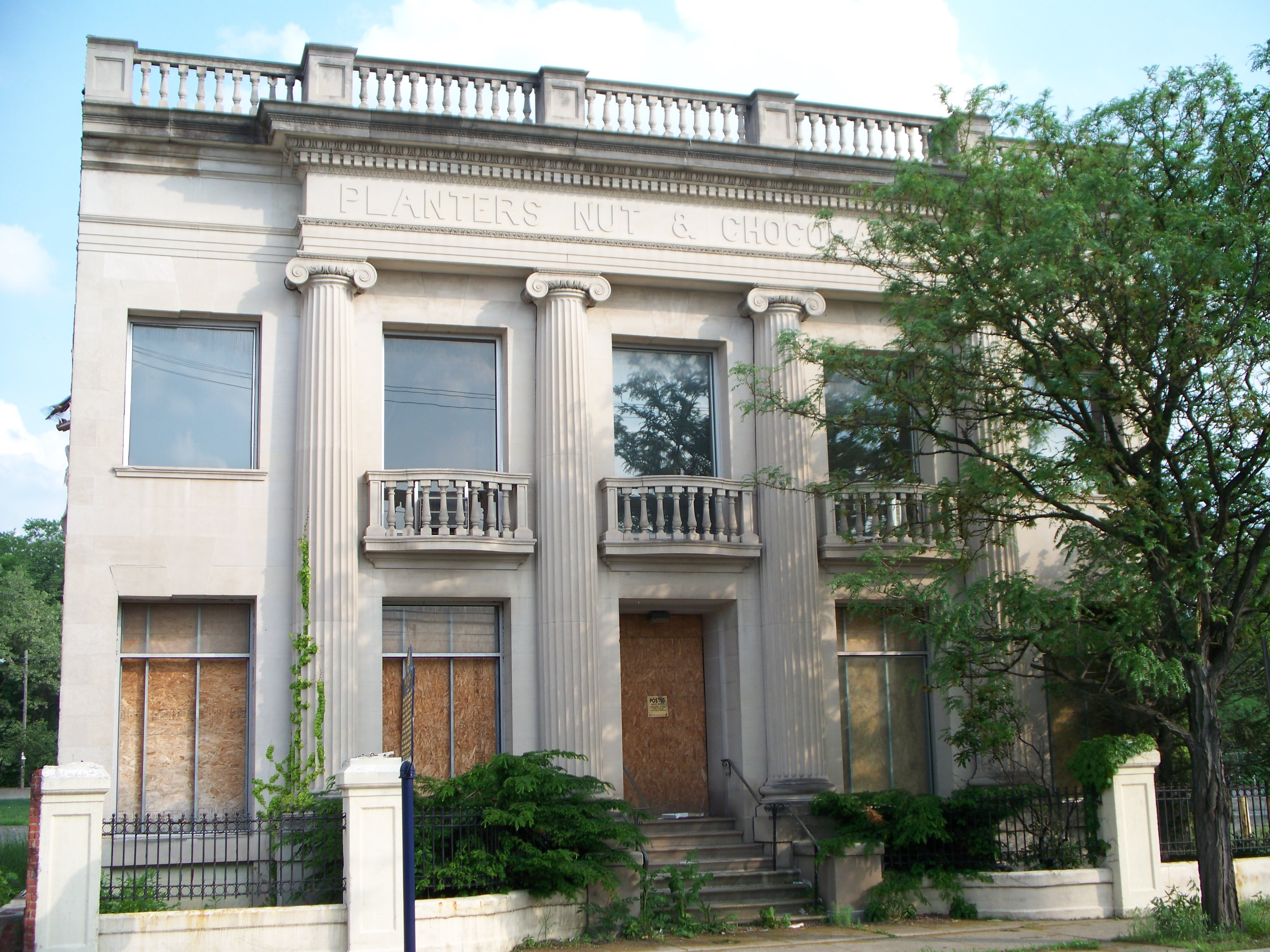 Richard Saullo
Planters Peanuts' offices were located on South Main Street in Wilkes-Barre before their demolition in 2006.

In 1906, Obici partnered with a fellow Italian immigrant, Mario Peruzzi, to rent a factory to produce peanuts; they called their business the Planters Peanut Company. However, due to the high expenses in transporting peanuts to Wilkes-Barre from Virginia, company finances became tight. As a result, the two men to moved to Suffolk, Virginia, in 1913. This move to Virginia reduced transportation costs significantly, as the peanuts they bought were from that area and all the middlemen were removed. However, Obici wanted to keep the roots of his company alive, so he kept the company headquarters located back in Scranton. However, an odd predicament occurred when retailers started selling low quality peanuts under the guise of Planters, creating a problem that damaged the company’s reputation for high quality peanuts. Obici wanted to resolve the problem quickly, so he decided that advertising for the company was the best solution.

For the company to be more well-known, Obici wanted to have an icon that was easily and quickly recognized, instantly reminding shoppers of Planters. Obici held a contest for drawings of his new icon, and a 13-year-old boy named Anthony Gentile was the winner; Mr. Peanut was born. After Gentile’s drawing won the contest, Obici had it edited by an art firm for it to be trademarked as the company’s icon. From that point on, Mr. Peanut was the face of the brand and became a major part of how Planters targeted their advertising to the youth of America. To help solidify Mr. Peanut in the peanut industry, Planters created such items as Mr. Peanut’s Paint Book and “Planters Peanut Party,” a game for all Mr. Peanut fanatics to play and enjoy. Mr. Peanut also became the spokesperson for the company, informing consumers of the nutritious value of peanuts and of the convenience of eating them.

Mr. Peanut was an instant success. He first appeared nationally in 1918 in an advertisement in the Saturday Evening Post, and Mr. Peanut became the symbol of the peanut industry by the mid-1930s. By the 1950s, Mr. Peanut was appearing regularly on television commercials. Moreover, this icon of Planters was a popular figure in Atlantic City. According to Andrew Smith, the author of Peanuts, the beloved company mascot strolled up and down the boardwalk of Atlantic City in 1930, promoting peanuts and the newly opened store along the promenade. However, the Atlantic City boardwalk has not been the only walkway Mr. Peanut has appeared on; in 2004, Mr. Peanut earned a star on the Advertising Walk of Fame, where one can see him in the cement today. Mr. Peanut was also the star attraction at the 1961-1965 New York World’s Fair, and he also became the official snack nut of NASCAR in 1999. 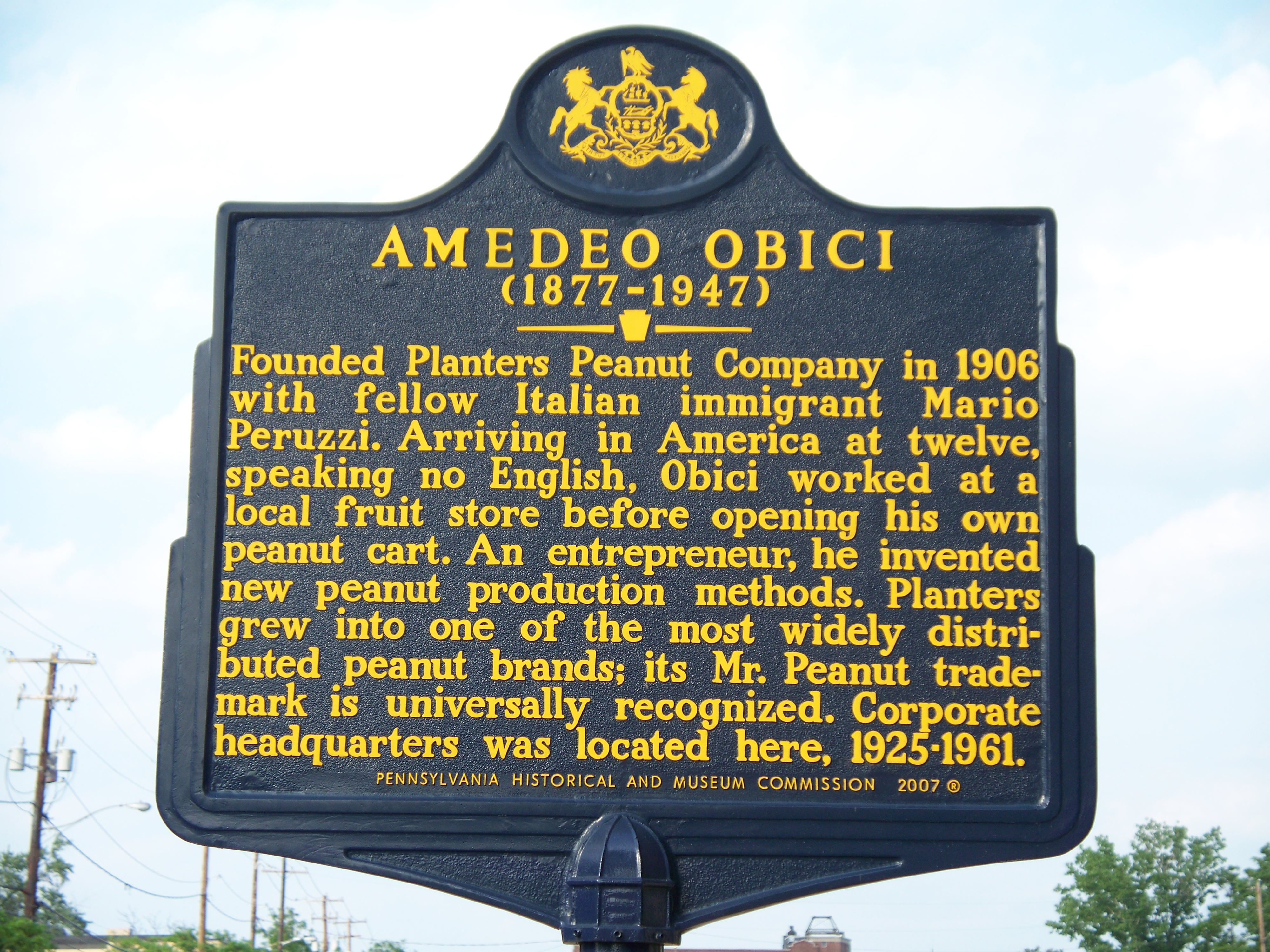 Richard Saullo
Amedeo Obici's time in Wilkes-Barre has been commemorated by the Pennsylvania Historic and Museum Commission.

Furthermore, the peanut company was able to create innovative advertising campaigns to adjust to changing times. In 1923, Planters launched the Nickel Lunch campaign, allowing customers to buy their peanuts more conveniently; freshly packaged one-ounce bags were sold for a nickel. This campaign also promoted peanuts’ nutritional value, showing that simply eating peanuts on a daily basis provided a person with the nutrients they needed. Moreover, a few years later in 1930, Obici saw the positive aspects of peanut oil and decided to utilize the potential it had by introducing Planters Peanut Oil. Then, during World War I, peanut sales skyrocketed because people were asked to eat more peanuts in order to send other food supplies to soldiers, and Obici saw the chance to build a good company image so that people would stick with Planters even when the war was over. He also created the Peanut Bar, a candy bar, to help diversify peanut products that were sold, as well as compensating for the lower amounts of sugar available during the war. Obici’s keen eye for the potential gain of more customers during this time helped Obici cement Planters as a national brand.

Today, Planters Peanuts and Mr. Peanut are seen everywhere because of one Italian immigrant who came to the United States not knowing a word of English. Even though he had very little formal education, his initiative, mind set, vision of potential, and ability to advertise boosted him to success. He took something so small, a peanut, and made it a commodity in a growing nation. From owning a small fruit stand in Wilkes-Barre to a starting the largest peanut-processing company, Amedeo Obici lived the American dream.

The Center would like to thank Frank H. Jump and his Fading Ad blog for his help illustrating this story.