Burnt Cabins: Against the Odds 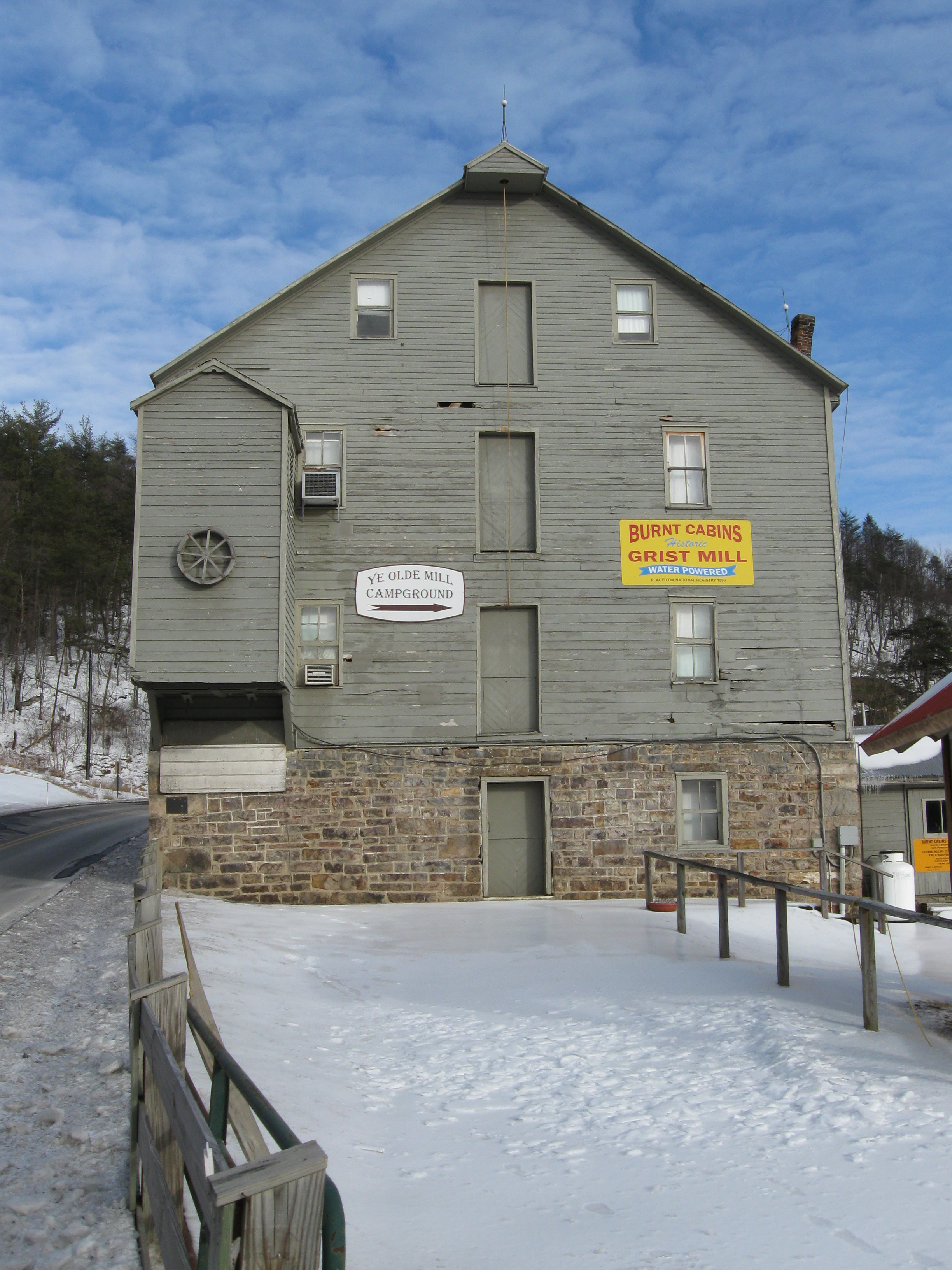 Alan Jalowitz
The Burnt Cabins Grist Mill in January 2009. The Grist Mill has been on the National Register since 1980.

Bread has been the staff of life since ancient times. Its production has enabled the growth of civilizations; its shortage has overthrown governments. Aside from the task of growing the grain itself, one of the most practically and socially important functions has been the milling of that grain. In small scale operations, individual land holders and their families would complete that onerous task. Once societies grew in size, however, distinct jobs began to appear and one of the most vital of them was the local miller.

The miller was depended upon for his skill and for his honesty. Many tales from throughout the world have depicted those who failed to live up to either quality, most famous among them those of the Middle English author Geoffrey Chaucer. Nowadays in the era of automation and pre-sliced bread, few ever think about how the miller did his job and how bread arrives in the stores. There are a few places remaining, however, where the curious can go to see what the old fashioned millers used to do. One of them lies in the northeast Fulton County town of Burnt Cabins.

One of the oldest buildings in the tiny town is the Burnt Cabins Grist Mill. The Historic American Engineering Record describes it merely as a “two-and-a-half-story clapboard structure with a corrugated-metal roof and double-hung, four-over-four windows.” But as anyone associated with old-time milling could say, there’s a lot more to a mill than just the mill building. 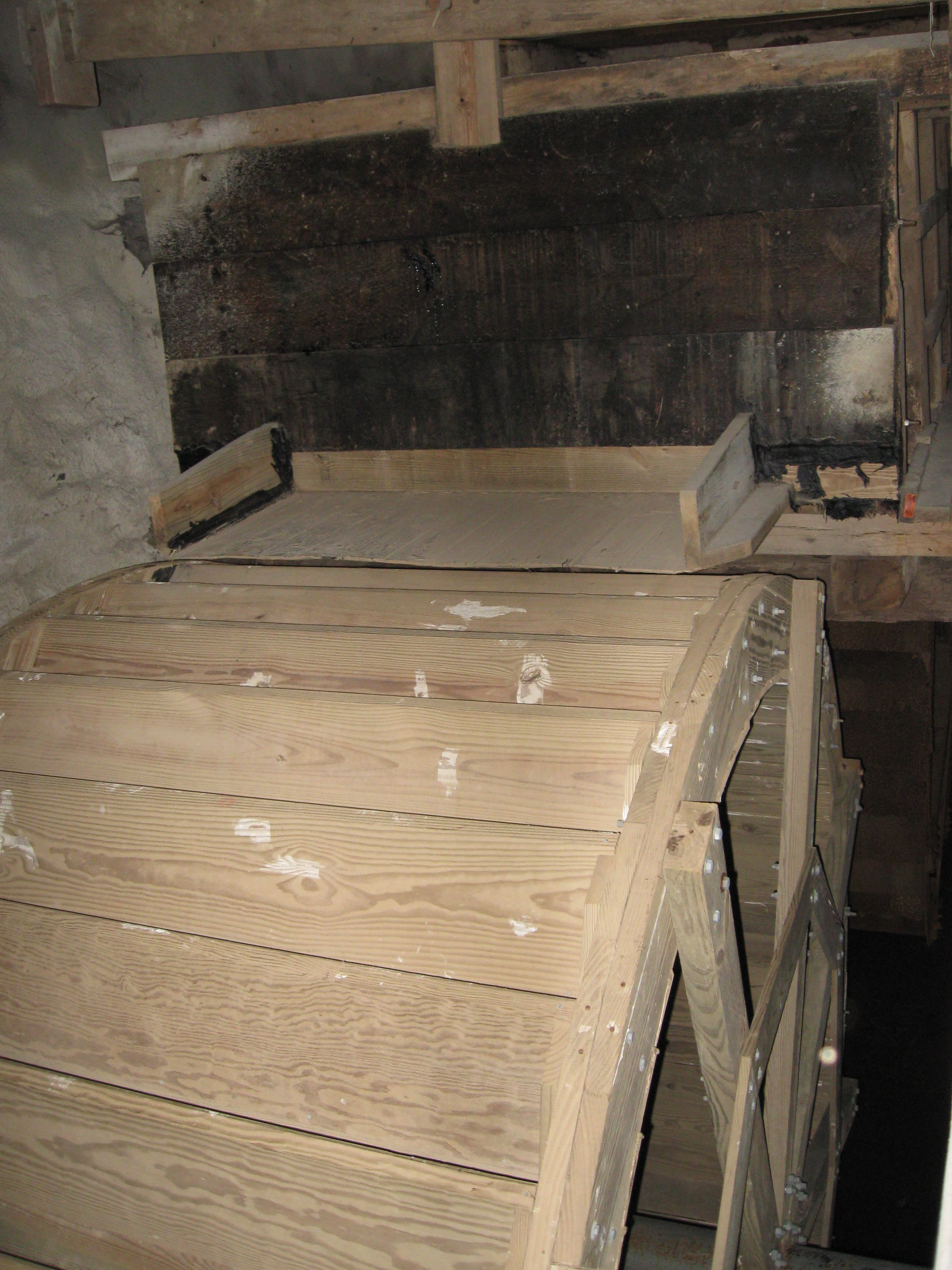 Alan Jalowitz
When water flows through the mill trace, this wheel provides the power to grind the grain on the floor above.

Water-driven mills like that at Burnt Cabins, naturally require sources of flowing water to turn the waterwheels that move the machinery to grind the grain. In this case, the water comes from seven miles away in the Cowan’s Gap State Park, according to owners Greg and Dawn Harnish. During the Great Depression, the Civilian Conservation Corps built the dam on the Little Aughwick Creek that powers the mill.  As the water descends from the park, some of it is diverted into a 1000 foot-long millrace that directs the current into the mill and onto the millwheel just as it has done since roughly 1840.

As the water hits the 14 foot overshot waterwheel inside the building (the larger wheel positioned near the Little Aughwick is merely for show, according to the Harnishes), it turns a series of shafts that eventually move the 1500 pound burr stones that grind the grain into flour. The current millers grind primarily cornmeal and pancake mixes. In former days, however, the mill would grind grain for products for humans or for animal feed. Food safety laws stopped that practice in the 1960s.

The flour produced by the burr stones drops through the floor to the bottom floor. Mixing with other grinds of flour and additional grains take place to manufacture the products the Mill sells today.  Flour used to be transported to the attic via a series of pulleys and tin cups for sifting; the sifting system hasn’t worked for years, though the current millers hold its renewal as a fond dream. During the 1960s, the mill went dormant, resulting in the deterioration of some operational capabilities. 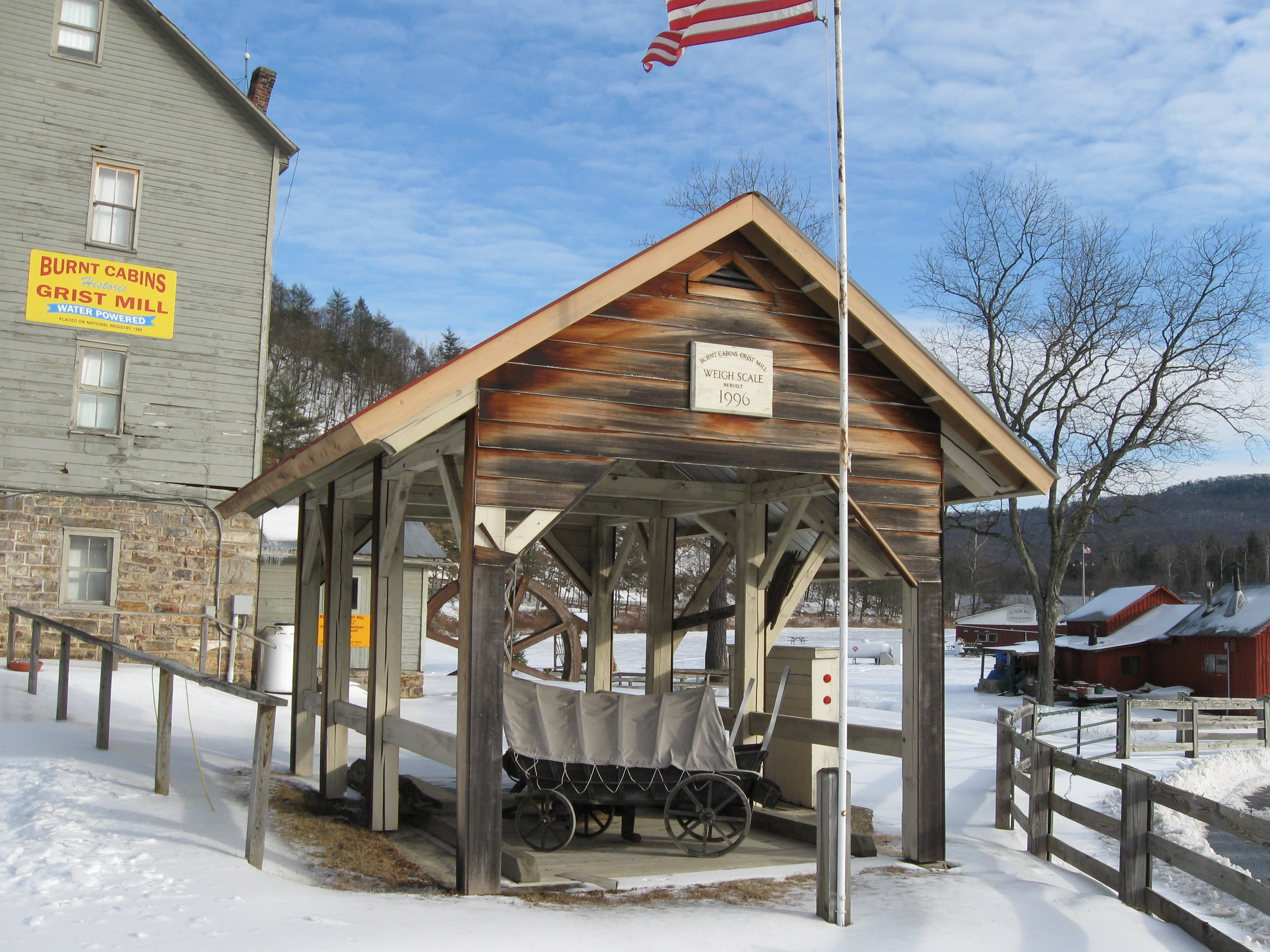 Alan Jalowitz
The restored Weigh Station shows how farmers would have had their wagons and crops weighed for payment.

The Blattenberger family undertook a restoration of the Mill when they purchased it in 1969. They sought and received grants from the federal government to restore two of the outdoor features of the mill: the mill race flume and the weigh station canopy and timber scale bed. Landscape architect William J. Collins writes that much of the importance of the restoration of the Burnt Cabins Grist Mill lies in its “promotion [of] a wider recognition of ‘non-bridge’ heritage timber transportation structures” and that the two projects “integrate local timber use, historic timber detailing and craftsmanship, and modern timber treatment.”

In addition to raising grant money to support the site, the Blattenbergers had restored much of the internal workings on their own during the 1970s and 1980s, as well as developing a gourmet mill products business. Part of the site has also served as “Ye Olde Mill Family Campground,” raising money to maintain the historic site. With their purchase of the operation in 2006, the Harnishes have continued running the mill and campsite and working towards further restorations of the Mill.

Through the work of the Blattenbergers and the Harnishes, the Mill site is more secure than it has been during various points of its history. William Collins records that both William H. Vanderbilt’s South Penn Railroad (a would-be rival to the mighty Pennsylvania Railroad) and the Pennsylvania Turnpike each nearly destroyed the site during the decades-long ownership of the Baldwin family. Last minute financial issues saved it from the railroad and final decisions on the route of the Turnpike diverted the road from its original route through the Mill. 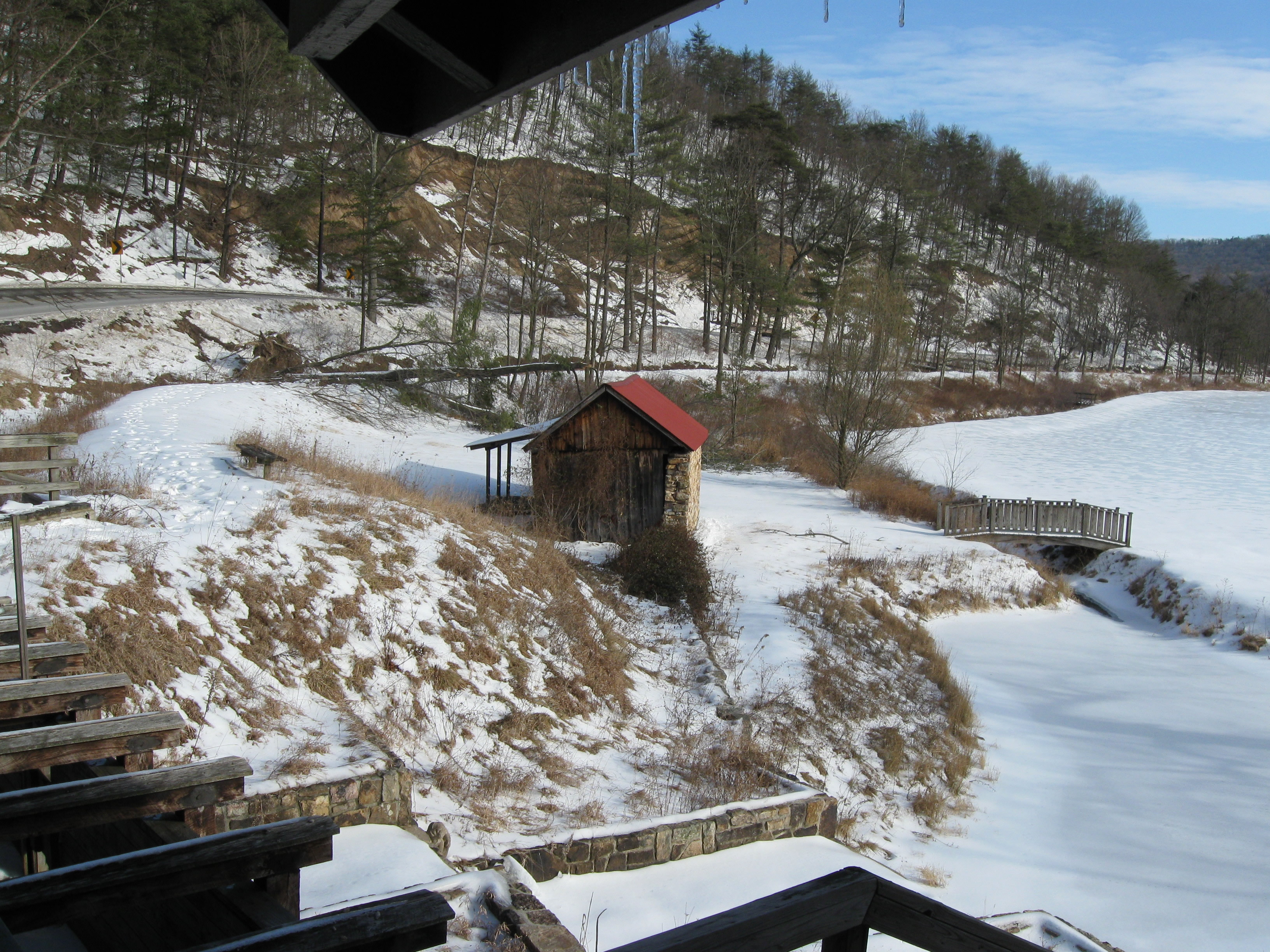 Alan Jalowitz
The mill race brings water from the Little Aughwick Creek to the mill. The path of the race in this picture travels a nearly horizontal path slightly above half way up the picture, until it sharply turns to meet the mill.

The current mill, however, is the second that has been built on the site. In roughly 1770, Frederick Dubbs built the first mill for John Dubbs. Considering the rough start the settlement at the Little Aughwick had a mere twenty years earlier, it is amazing that there is a town called Burnt Cabins.

But…just how does a town garner a name like “Burnt Cabins?” Upon hearing that the name came about in the 1750s, most would guess that local Native American tribes had stormed the settlers, burned their dwellings, and reclaimed their land.  There was a land dispute at the center of the name’s story, but not the stereotypical tale just outlined.

As a measure of good faith with the Native American nations and no small degree of realpolitik with their French rivals in the area comprising what is now western Pennsylvania and the Ohio Country, the British colonies made pacts agreeing to keep their settlers east of the Appalachian Mountains. Despite the official government position on the matter, settlers from the east in Pennsylvania and from the south in Maryland and Virginia began to trickle into the area that is now Fulton County and other regions. By mid 1749, the flow had so begun to threaten the various groups of the Iroquois Confederation that they made official protest to the Provincial government in Philadelphia.

In response to the Senecas’ complaint of July 18, 1749, the Lieutenant Governor of the Province, James Hamilton, issued an edict to all British subjects:

I…do hereby, in His Majesty’s Name strictly charge, command, and enjoin all and every the persons who have presum’d to settle in any part of the Province Westward of the Blue Hills to remove themselves, their Families & Effects, off those Lands. 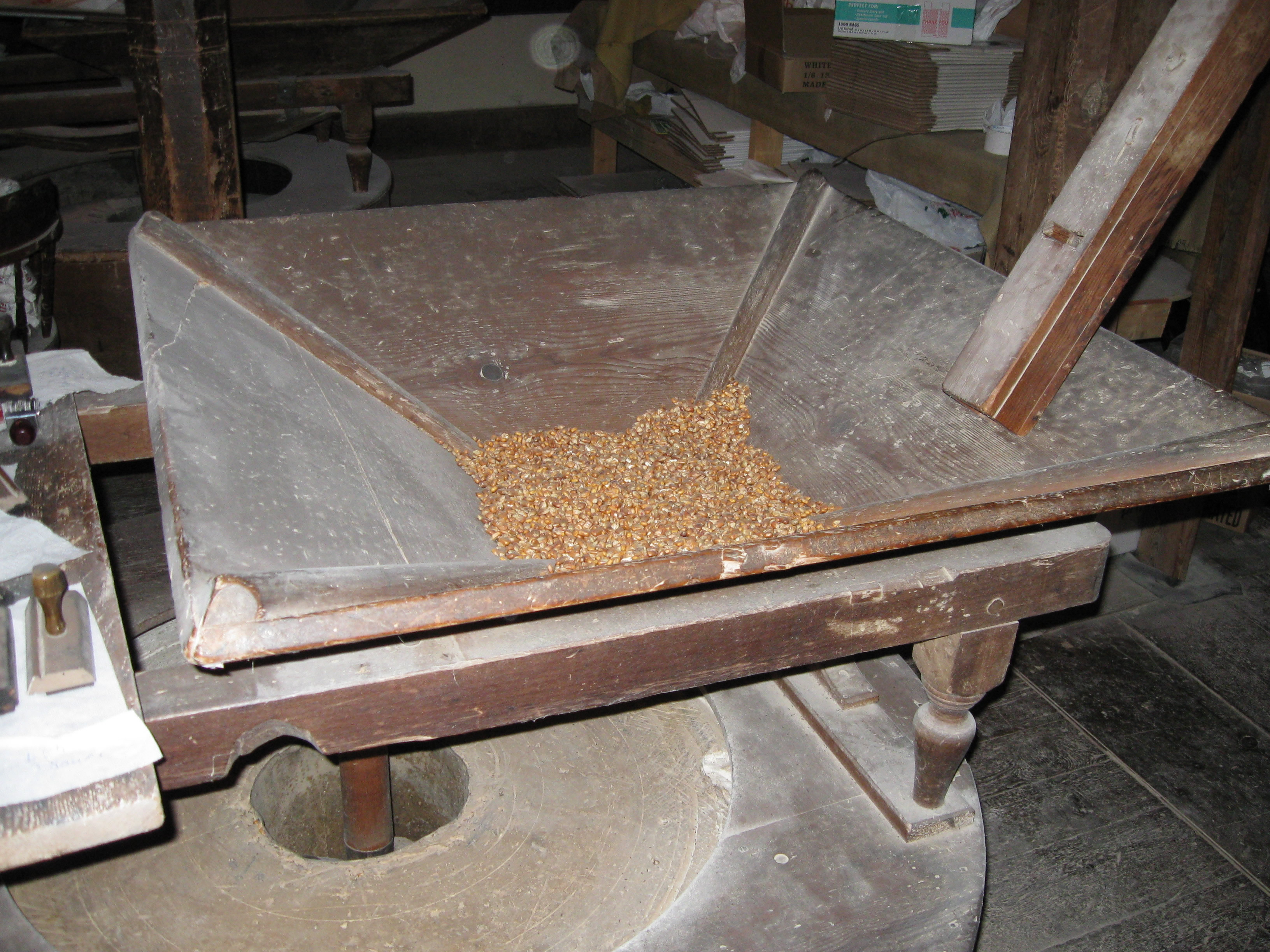 Alan Jalowitz
This grain will be ground between the wheels and will drop down to the floor below for further processing.

Danielle Angeline of the Pickett News notes that this sort of proclamation had already failed with the attempt to move settlers out of the settlement of Sidneysville (the site of current day Burnt Cabins). Indeed, a month after the Senecas had protested to the Colony, Chief Canasatego of the Onondaga repeated the complaints, saying that the whites were “spoiling their hunting” as Mrs. Mellott remembers the tale passed down in the town. The pressure on the Indian lands had to end, as far as the Provincial government was concerned and they would take more direct action in 1750.

In May 1750, the provincial government sent several agents into what was then Cumberland County to remove the white “squatters” from their cabins and settlements, including Sidneysville. Among these agents were the famous translator and missionary Conrad Weiser, justice of the peace George Croghan, and Secretary of the Provincial Council Richard Peters. Delegates from the Iroquois nations accompanied them, largely so they could be shown the King’s word being fulfilled.

Beginning on May 22, the party climbed Tuscarora Mountain (named after one of the six Iroquois nations), and evicted several settlers. In the ensuing days, the party split up to cover more territory. Volwiler describes some of the reaction:

About sixty squatters were found. The original intentions were to arrest, convict, fine and imprison them, but two of the first five arrested fled calling back: “You may take our Land and Houses and do what you please with them, . . . but we will not be carried to Gaol.” A third squatter met the officials with a loaded gun.

After that, mass evictions were the rule, secured with financial bonds. But legal niceties of that sort seldom make for satisfying, tangible justice. As a gesture to the Indians, the provincial officials decided to burn the cabins of Sidneysville. Not all, however. Actually, only a token three cabins were destroyed. Volwiler quotes Secretary Peters as writing: “the Cabbins or Log Houses which we burnt were of no considerable Value, being such as the Country People erect in a Day or two. . .” 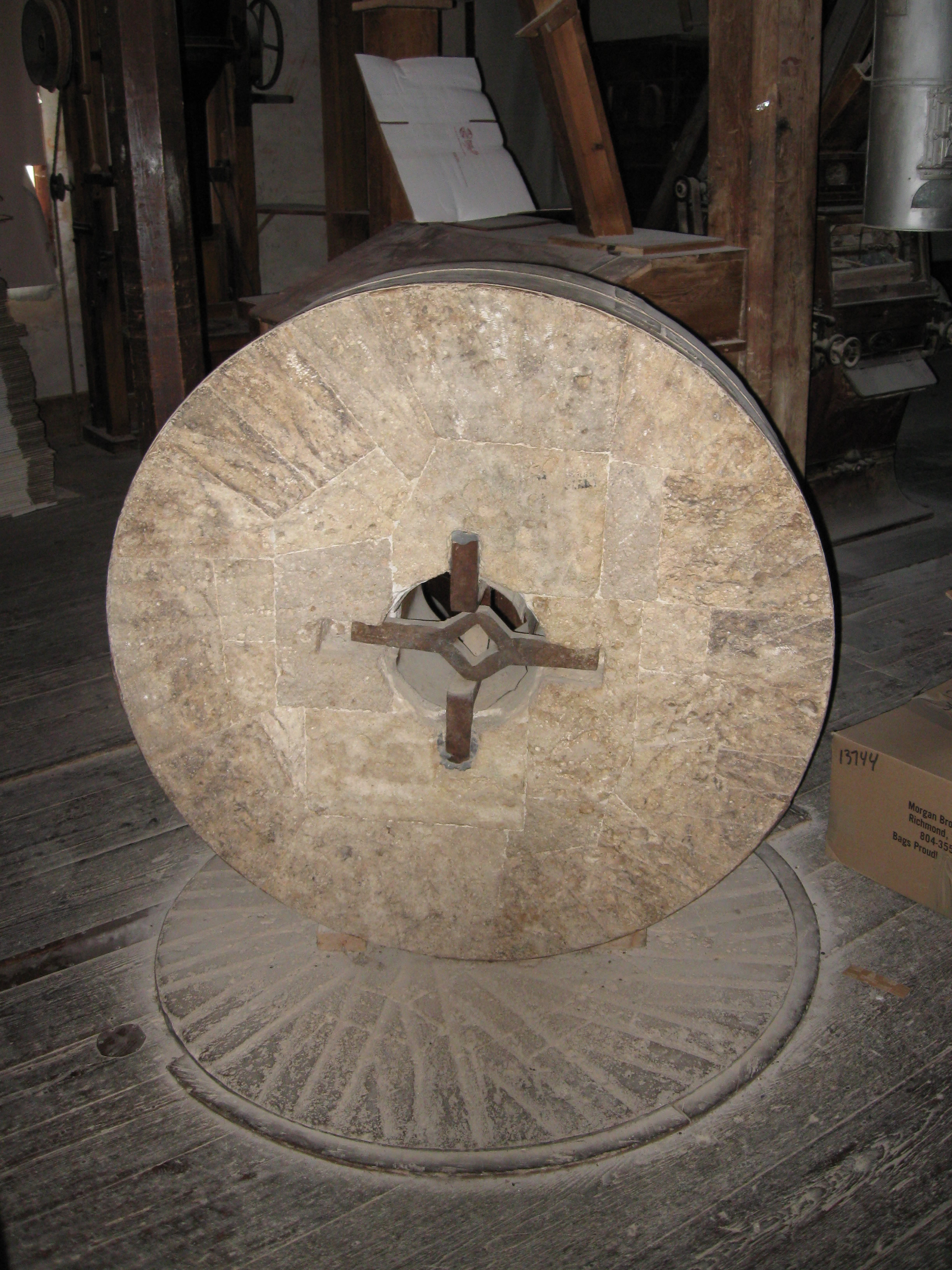 Miss Greathead’s History of Fulton County recounts Lt. Gov. Harrison’s rationale for the actions: “I thought it dangerous any longer to suffer such an open contempt of the authority of government, and therefore gave orders that the law should be put into execution against them.” He goes on to say that “there will be absolute necessity of taking still further measures against them [the settlers].” For the time being, however, most sources record a time of peace. That peace, it was thought, was secured with the Albany Treaty and the purchase of land that came with it in 1754.

Both peace and the Weiser/Croghan/Peters mission failed in 1755. Settlers returned to the valleys. Shawnees and Delawares attacked in great force in what became known as the Great Cove Massacre. And Sidneysville was reborn, but not as Sidneysville or even as New Sidneysville. In commemoration of the settlers who had lost their homes five years earlier, the area became known as Burnt Cabins.

The National Park Service has recognized the importance of this little town and its Grist Mill by placing each of them on the National Register of Historic Places: the Grist Mill in 1980; the town itself in 1998.

The Burnt Cabins Grist Mill is open for tours during the summer. More can be found on its availability and products here.