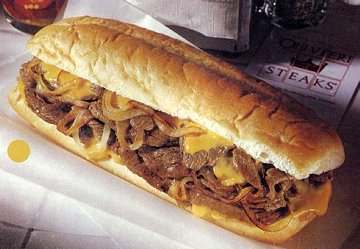 Home to the famous soft pretzel (with mustard of course), the Tastykake factory, and some of the best regional potato chips; Philadelphia has long been known for its great tasting foods. However, the one food that has topped all of the above, the one which cannot be made the same way anywhere else around the world, is the Philadelphia Cheesesteak. The sliced beef, chopped onions, and melted cheese all on a six to twelve inch hoagie roll, come together to make one of the most renowned foods in America. The creation of the steak sandwich adds to Philadelphia's already lengthy food résumé in America. 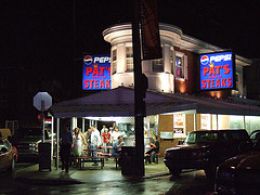 One day in 1930, the owners of a little hotdog shop in Italian immigrant-filled South Philadelphia decided it was time for a change. Tired of their normal lunch of hot dogs from their shop, Harry Olivieri went to a local grocery market to purchase some beef. Harry and his brother Pat then sliced up the beef, grilled it with some onions, and placed it on a roll. Just before beginning to dig in, a cab driver caught the alluring aroma of the hot beefy sandwich. Upon asking for and receiving his food, legend has it that the cabdriver shoveled down the five-cent beef sandwich and stated, "Hey...forget about those hotdogs, you should sell these." Before either brother had taken a bite of their delicious discovery, the sandwich became a hit. Within days of the initial mouthful, word spread. Cab drivers from around town were demanding the extraordinary steak sandwich.

It took Pat Olivieri ten years to finally succumb to the demand for the steak sandwich and begin selling it as his main attraction. In 1940, the Olivieri brothers opened up Pat's King of Steaks in South Philadelphia, at 1237 East Passyunk Avenue, where it has survived for over sixty years. Not until twelve years later did cheese get added to the recipe of the already mouthwatering meal, giving birth to the modern Cheesesteak.

The invention and spread of the delicious sandwich brought travelers from all around the country to try the newfound glory. Conversely, along with the success the new business brought Pat's, the creation of the Cheesesteak brought competition. In 1966, after years of minimal competition for their sandwich, Joe Vento opened up the foe of Pat's King of Steaks, Geno's Steaks. The two have been in a heavy weight showdown for more than 40 years. The only problem with this boxing cliché is that this match does not end after three rounds, and the competitors do not give themselves space in between punches. 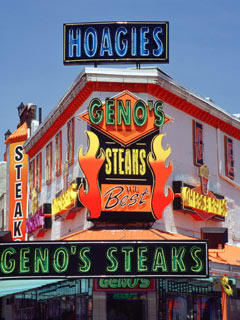 Geno's Steaks opened up a minimal distance from Pat's. The two businesses go to war for customers only the width of a street away. Joe Vento chose 1219 South 9th Street as his location for his sandwich shop. The dilemma: 1219 South Street and 1237 East Passyunk Avenue are the corner addresses at the intersection of South Street and East Passyunk Avenue. Coincidence or not, the location and quality of each company has lead to the Cheesesteak Civil War.

Perhaps the spark of the great dispute of who makes the best sandwich started when cheese was added to the initial steak sandwich in 1952. Both owners take credit for the final ingredient that made the steak sandwich into the Cheesesteak sandwich. The people at whatscookingamerica.com state that longtime employee Joe Lorenzo melted cheese onto the normal recipe because he wanted to try a new twist. On the other hand, the people across the street from Pat's make the claim that the melted cheese was added by their company, but not until Geno's opened in 1966. After decades, the dispute has yet to be resolved, and probably never will be.

In Philadelphia, the Cheesesteak stands for so much more then just a sandwich; it has become part of life to Philadelphians. It is a fact that Philadelphians come off as hardcore sports fans, in some cases rude and obnoxious. Known as the fans who threw snowballs at Santa Claus, they take very little offence to this hardnosed fans claim. When it comes to somebody insulting their pride and joy, they go through the roof. For decades their sports teams have failed to win the big game, Super Bowl, World Series, NBA Championship, or Stanley Cup, the citizens needed to defend something. What did they choose? A sandwich, the sandwich, the Philly Cheesesteak. The CEO of the Corbin & Company Capital Management firm, Dave Corbin, wrote an article in May of 2008, about his travels across the United States as a high-class businessman. In his article he says that he has eaten at over fifteen restaurants in 45 of the 48 continental states Based upon Dave Corbin's ratings, Philadelphians finally have a title to defend in 2008. Dave Corbin classified Geno's Steaks as the number one place to eat in the continental United States for 2007. Although Pat's King of Steaks was heart broken, Philadelphians could not have been more proud.

The Cheesesteak lifestyle has developed so much that Pat's and Geno's restaurants have created something similar to their own language. Geno's and Pat's both have a sign outside their order window that serves as language course for ordering food. A Cheesesteak with onions and with American cheese does not exist. Buyers can have three types of cheese on their Cheesesteak: American, Provolone, or cheese whiz. In regards to onions, it is "wit (yes) or widout (no)." An order for a Cheesesteak with cheese whiz and onions would sound more like "Cheesesteak whiz wit." Each store has the instructions posted so that new customers can learn the ropes before put under the spotlight. Pat's sign also includes the advice, "If you make a mistake don't panic, just go to the back of the line and start over." With such high demand and so many hungry customers a day, the two businesses get so crowded that employees insist customers know what they want before being asked.

Trifter.com
How to order a cheesesteak.

The Passyunk Avenue and 9th Street intersection has gone from the immigrant part of town to the equivalent of the red carpet in Philadelphia. Just as movie stars, athletes, and musicians come from all over for the next big event in Hollywood; the same goes for South Philly's Cheesesteaks. Pat's has pencil sketches of any big named celebrity who has graced the store with its presence, while Geno's has photos of numerous celebrities on their website. From singer Jessica Simpson to television personality Vanna White, from basketball star Yao Ming to talk show host Regis Philbin, celebrities cannot go to Philly without trying a Cheesesteak.

Celebrities have gained or lost points to their public image in Philadelphia based upon their Cheesesteak experience. Sylvester Stallone, already loved by the Philadelphia public for his work in the Rocky films, gained even more points because he stood outside of Pat's King of Steaks during one scene in the first movie. Bad press can also come from an improper encounter with Cheesesteak society. In 2004, presidential candidate John Kerry ordered his Cheesesteak with Swiss cheese. This caused many people in the media to laugh and brought some bad reviews from Philadelphians. In 2005, when the Eagles went to the Super Bowl, Governor Ed Rendell of Pennsylvania placed a wager of a Cheesesteak with Massachusetts Governor Mitt Romney, following the tradition that governors of states with teams in the big game will make a food-related bet on the outcome. Mitt Romney turned down the sandwich saying, "...the Cheesesteak has no nutritional value." Philadelphians looked upon Romney and Kerry as if they were Cowboys fans, never a good thing in Philadelphia.

The love for the Philly Cheesesteak no longer lies just within the city limits. As people move from the city around the country, their craving and passion for the sandwich stays with them. Once someone has tasted the unforgettable tasting sandwich, it becomes nearly impossible to not desire it again and again. Substitutes for the original Cheesesteak have been made, Steak-Ums being the most popular. However, this alternate form of the Cheesesteak is nothing more than what Egg Beaters are to chicken eggs. Bloggers have posted all over the Internet saying that once you eat the Philadelphia Cheesesteak, you cannot eat another form of Cheesesteak anywhere else in the world.

The debate that started on a small block in Philly in 1966 has grown over the years. The Cheesesteak debate no longer involves just Philadelphia locals, but it includes politicians, athletes, movie stars, etc. People from all around the country have their own opinion on who has the best Cheesesteak. Most likely no one will never know who in fact added the cheese to Pat Olivieri's steak sandwich, but people are sure glad someone did. The sandwich has become a celebrity in its own right. Unlike all other celebrities, however, it will never die. Its past may stay somewhat hazy, but its future is bright and full of promise. It gives the City of Brotherly Love just one more reason to be proud.