The Chip of Pennsylvania 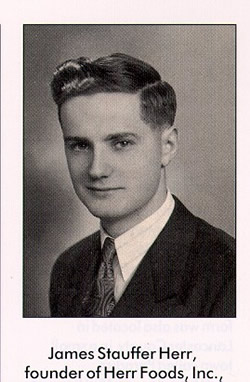 When you open a bag of chips for a nice snack or to go along with a sub, there's a good chance that those chips that you're going to eat are from Herr's Potato Chip Factory. Over 500,000 pounds of potatoes get processed into 50,000 pounds of potato chips everyday in this family-owned business. Jim Herr, founder of the business, started in 1946 with a small household cooker in his barn in Lancaster County's Willow Street, the location of his first shop. The business was first set up as a door to door business. It took off like wildfire until 1951 when a hot potato oil spill in the middle of the night caught fire and burned down the whole store and part of his house.

Because of this horrific event, Herr's company faced a really big problem. With help from family, friends, and the bank, they were able to purchase a nice factory at its current location in Nottingham. After the new purchase, the business never looked back. Now they have recognition for being a leader in the snack food industry, with a product line of more than 340 items. 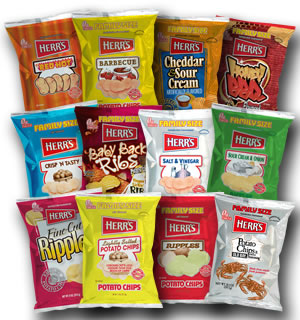 In 1958, Herr's wanted to spice up their chips, literally, so they tried a barbeque seasoning; it proved to be a huge success with their consumers. From their reactions, Herr's knew that they could add more seasonings, and they did just that. After Barbeque, came Sour Cream and Onion, No-Salt, Old Bay, Salt and Vinegar, Pizza, Red Hot, Slightly Salted, Pennsylvania Dutch, Dill, and several more. In theory, they might try to develop a seasoning for any conceivable flavor.

In 1963, Herr's made a daring purchase of doubling their factory size to fulfill the consumer's wants for their product. For all of Jim Herr's experiments, his business ethics, and his overall attitude, he was rewarded with the Pennsylvania Small Businessman of the Year in 1969. With the growing concern for recycling and conservation, Herr's bought a huge dairy farm right beside the factory on which farmers would rent land to produce better potatoes and give a certain percent to Herr's factory. According to Sharon Hernes Silverman, author of Pennsylvania Snacks, "Herr Foods, Inc. quietly does the right thing in many ways, including recycling potato starch into paper, wastewater from the plant to irrigate a nearby farm, buying back expired products and donating them to food banks, sharing its profits with employees, and adhering to a no-layoff policy." Also in 1974, they changed their packaging from glassine, which is a waxy material to a foil material, which they still use today to keep the products fresher for a longer period of time. 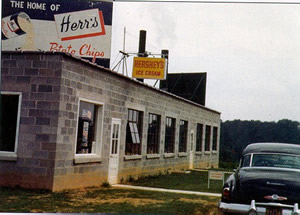 Throughout the late 1970s and early '80s, Herr's Potato Chips developed more products than just the usual chips. In 1976, they developed cheese curls; 1978, popcorn; 1981, pretzels; and in 1984, onion rings. In the 1990s the business was distributing their products in 11 northeastern states and as far as Virginia and Ohio, greatly increasing their reputation throughout the U.S. and even internationally as well. Herr's supplies products in some parts of Europe and Africa as an experimental distribution. There are about 100 factory workers in the packaging section of the business.

In the present days of this famous local potato chip factory, there has not been that much of a change with the business's production process, but in 2005 Jim Herr retired and handed the business down to his oldest son. In the company's own words: "The legacy that Jim Herr passed on to the next generation of leadership has become the solid foundation for the future." Even though now all of the process is ran by machine except for the packaging, a nice tour of the factory could be a wonderful learning experience for even the youngest adult. 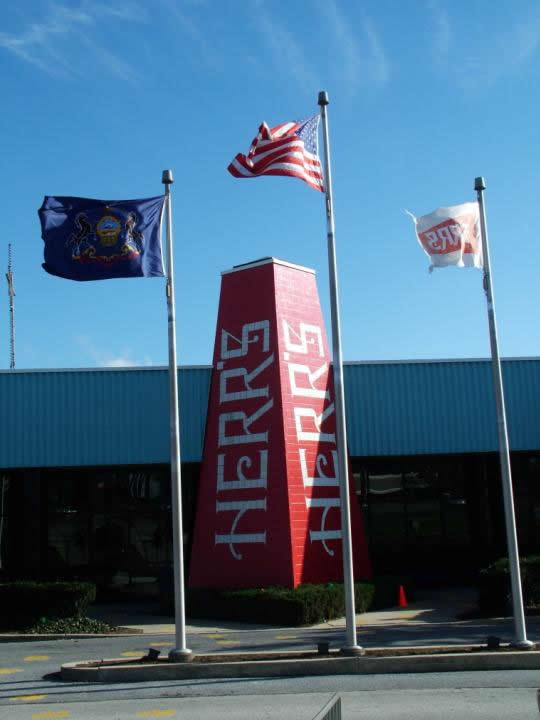 With a reservation, people can take tours of the factory, including a 10 minute video of the factory's history, a walk through the processing rooms, and even a nice fresh snack at the end. Overall the tour is about an hour long, but tourists will be rewarded at the close of it. The cost of perhaps the tastiest tour in PA is absolutely free. On the tour you will travel through the numerous processing rooms for each particular product that Herr's sells. Every room is made of glass, allowing the tourist to view the cutting and cooking process. On their Watch It Made website, Karen Axelrod and Bruce Brumberg describe the tour: "In the pretzel area, gaze at a 100-yard stretch of pretzel twists, in rows 20 to 24 across, marching to massive ovens." Every room is huge with everything moving and the savory smell of fresh potato chips and dough. After the pretzel room, you walk into the famous chip area where people would see chips, according to Watch It Made, "traveling along a conveyor belt through a series of machines that wash, slice, cook, or season them." Before leaving the chip room a tour guide will grab some freshly seasoned chips right off the conveyor belt for the tourists to sample for a nice finishing touch. When the tour finally comes to an end you will receive a free bag of chips, which leads you to the specially designed visitors center, café, and gift shop.

According to Silverman, "Pennsylvania is the nation's top chipping potato state;" this adds a more competitive side to potato chip making in the nation. With the Herr's Potato Chip Factory reputation and perfectly tasting chips, it's no wonder why it's one of the leaders in the snack food industry, shipping out more than 10 million bags a month. Now that the ownership has been passed down, inventive ideas and methods of creating the best chips in Pennsylvania will continue to pour out of Nottingham.