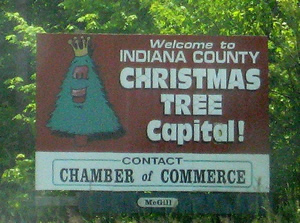 Sarah M. Carter
Indiana County proudly boasts of being the “Christmas Tree Capital of the World.”

Many non- Pennsylvania residents know Indiana, Pennsylvania, as the hometown of 1950s actor Jimmy Stewart, while others know it as the college town around Indiana University of Pennsylvania. However, few outside of western Pennsylvania may know that Indiana also claims the title of "Christmas Tree Capital of the World."

Christmas trees grown in Indiana County have been shipped to other states throughout the country. They have appeared in Washington, D.C., to decorate the halls of Congress, been provided to families of New York City firemen, and even sent abroad to soldiers in Ho Chi Minh City (formerly Saigon), Vietnam, to celebrate Christmas during the Vietnam War. The passionate tradition of Indiana County Christmas tree farmers enables these trees to travel all over the world. Every holiday season, Indiana hosts a pageant to promote the Christmas tree industry. From this competition, "Queen Evergreen" is crowned to reign over and represent the county at fairs, farm shows, and other local Christmas celebrations.

Indiana's influence on the Christmas tree industry began in the early twentieth century. Around 1918, the town was the first place where farmers began planting pine and spruce evergreens to grow Christmas trees agriculturally. Over the following decades, this local production continued to grow. When the Indiana Christmas Tree Growers' Association was founded in 1956, an estimated 700,000 trees were grown in Indiana County. The following year, the new National Christmas Tree Association named Murray C. Stewart, an Indiana farmer, its first president. This unmatched production and national recognition encouraged the Associated Press to proclaim Indiana the "Christmas Tree Capital." 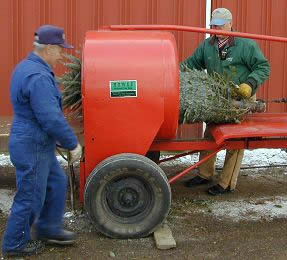 FlemingsChristmasTrees.com
An Indiana County invention, the Christmas Tree baler allows for the ready transport of trees throughout the United States.

Because it was at the heart of Christmas tree farming as an agricultural business, Indiana County farmers pioneered new technologies for the field. The first motorized Christmas tree baler (the machine used to bundle trees in twine to strap to a vehicle) was invented in Indiana County in 1956. This new invention was at first difficult to translate from idea to machine, taking several years to perfect. However, three years later, the first baler was introduced into the field. By 1960, they were produced and sold to customers across the country.

With an impressive local selection of trees, many residents search Indiana County for the perfect Christmas tree during the holiday season. Some of the most popular tree farms in Indiana include Fleming's Tree Farms, Musser Forests, and O'Sullivan's Nursery. These three nurseries typically offer pre-cut trees, wreaths, as well as assistance for adventurous customers eager to cut down their own trees. Some of the most popular trees grown in the county are the Douglas Fir, the Scotch Pine, and the Blue Spruce.

Pennsylvania, as a whole, has the largest number of Christmas tree farms and ranks fourth the total number of trees cut in the U.S. According to Jeff Gammage of The Philadelphia Inquirer, "the state's 2,200 Christmas-tree growers produce an estimated 2.5 million trees annually, with Indiana, York, and Columbia counties leading what boosters say is a healthy $60 million industry." While Indiana County no longer grows the largest number of Christmas trees in the world (or even in the United States), Indiana still claims its title of "Christmas Tree Capital" on several street signs throughout the county, particularly on Route 422.

Although Pennsylvania still boasts the highest number of farms, states such as Michigan, Oregon, and Wisconsin have higher numbers of total sales. These other states have diminished the exports of Pennsylvania Christmas trees to several lucrative markets in cities such as Chicago and southern states such as Florida. The rising preference for North Carolina's Fraser Firs, which have stronger branches and hold their needles longer, has also affected sales in the South. While Fraser Firs can be grown in Indiana County, they thrive at high elevations, appearing in greater numbers throughout the Appalachian Mountain region. 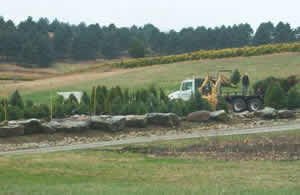 In addition to the challenge of maintaining sales in an increasingly competitive market, operating a Christmas tree farm itself is a difficult enterprise. It is not simply a matter of planting the trees and letting them grow, as the trees require a significant amount of routine maintenance. From shearing the trees every year to applying regular doses of fertilizer and herbicides, Christmas tree farmers have their work cut out for them. Virginia A. Smith of The Philadelphia Inquirer reports that recent costs "have skyrocketed: labor, transportation, pesticides and petroleum-based fertilizers, wire, even ribbon...and the hike in fertilizer has been staggering; growers who paid $330 a ton just a few years ago now pay $1,200." These rising costs are affecting the entire country, including Indiana County.

Despite their hard efforts, some Indiana County tree growers do not find their futures promising. On top of rising farming costs, many in the tree farming industry must endure the popular trend of consumers switching to artificial Christmas trees (or "fake trees," as some growers refer to them). Ed Chapman, owner of Chapman Tree Farm, has both noticed the causes and felt the effects of this shift over the past few years. In his experience as President of the Indiana County Tree Growers' Association from 1999-2003, Chapman noted that "a lot of older people have switched to artificial trees because of the ease of maintenance, and now probably about 60% of the market is dominated by artificial tree sales." The sales of artificial Christmas trees in home improvement stores and discount department stores have the potential to disrupt the farming tradition.

When asked how these trends have affected Indiana County Christmas tree production, Chapman mentioned both the pride for American trees and potential problems of "fake" trees. In particular, he said that his sales have remained constant over the years because of his advertising efforts. He noted that after the September 11th attacks (with Flight 93 crashing in nearby Shanksville, Somerset County), residents were eager to purchase real, local trees to support American businesses. More recently, many farmers are beginning to push back against the artificial tree industry, noting the health dangers of purchasing them. Studies conducted by the Environmental Quality Institute at the University of North Carolina-Asheville indicated that there was lead present in artificial trees, especially those which are several years old. According to the National Tree Growers Association, "artificial trees contain enough lead to require a warning label...lead is listed as a carcinogen, but it's widely associated with neurological damage." Many Indiana Co. Christmas tree growers are trying to convey this message to their customers to promote the sale of natural trees.

While the lead level in one artificial tree is not high enough to result in lead poisoning, it is high enough for these researchers to advise consumers to use caution when handling one. Their warnings are for households with young kids, noting that "children may ingest the lead when they touch the ground and the gifts and put their contaminated hands into their mouths." The lead in these trees is found mainly in the material used to make the branches more flexible and reduce the risk of fire. However, this material, called PVC, can "degrade in sun and heat and disintegrate into lead-laced dust" according to the Environmental Quality Institute researchers. 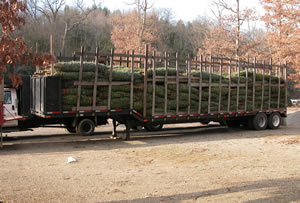 Not only can artificial trees cause potential harm to the customers who purchase them, but they also can pose serious environmental problems to the earth. If artificial trees are not disposed of properly, the lead can seep into the groundwater and potentially enter the local food chain. Because artificial trees are non-biodegradable and made from petroleum-based plastic, they will not disintegrate in landfills when they are discarded.

In stressing the potentially harmful effects of artificial trees, local tree farmers are promoting the value of grown Christmas trees. Some of these benefits include creating habitats for animals and material to be recycled later as mulch. In addition to these benefits, the Indiana County tree growers are making efforts to "go green" and use more environmentally sound methods to maintain their farms. Chapman explains these proactive concerns, saying, "We've gone to more natural pesticides to spray the trees with, and the chemicals we use now are safer than those used thirty years ago." A few years ago, he purchased ladybugs from California to control the bug population of aphids, instead of using chemicals on the trees. Chapman summarizes the proactive environmental concerns of Christmas tree farmers in Indiana County: "For every tree that's cut, three more are planted to cleanse the air." Returning to the tradition of live Christmas trees is an environmentally friendly choice during the holiday season.

Each December, millions of American will climb into their attics or walk into their storage rooms. They will pull out strands of colored lights, treasured family decorations, and likely either an angel or a star for their Christmas trees. For thousands of Pennsylvania residents, these trees will come from Indiana County, the birthplace of the industry that proudly claims the title, "The Christmas Tree Capital of the World."