The City of Rock 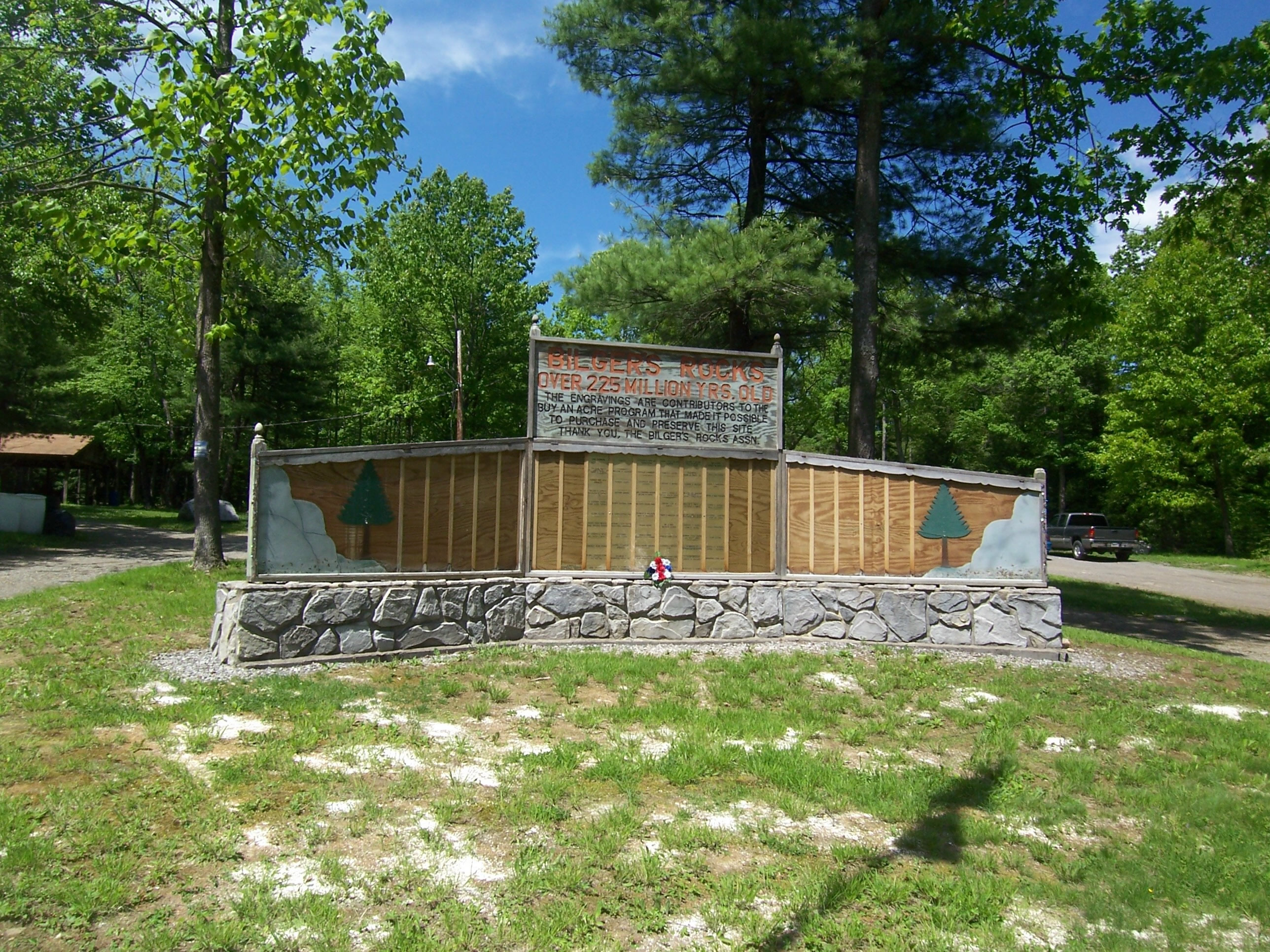 Holly Shok
Bilger’s Rocks welcomes visitors with this sign at the main entrance and a list of those who helped purchase the site in 1990.

On a hillside nestled in the heart of Clearfield County lies a peaceful and serene city. A prehistoric city built by the timeless efforts of nature, the perseverance of gravity, the effects of weather, and of course, rock and roll. The rock and roll of Mother Nature, that is. Referred to by geologists as "Rock City," Bilger's Rocks is the more than 300 million year old result of a gradual "mountain slide" of mammoth rocks. Constructed by the natural rock and roll of mountain boulders gradually separating and drifting down the Bloom Township hillside, the awe-inspiring site consists of seemingly endless caves, mazes, and walking paths. Open year-round and located five miles north of Grampian, and two miles east of U.S. Route 219, the forest of huge rocks lies on a 120 acre plot of land and is a popular and permanent attraction for tourists and locals alike.

Terry O'Connor of the Bilger's Rocks Association explained that the appeal of the "rock city" is the large variety of activities and experiences the geographical wonder has to offer. "There appears to be something here for those looking at or researching earth science subjects—fauna, flora, water, geology—to those that come to just relax in a laid back sanctuary, to those wishing activity—rock climbing, trail discovery, wildlife observation, caving, biking, horseback riding, bird watching, artifact discovery, exploring, camping, reunions, weddings, campfire meetings, group get-togethers, education seminars, music fests, craft shows, nature photography—and the potential is limited only by one's imagination," said O'Connor. 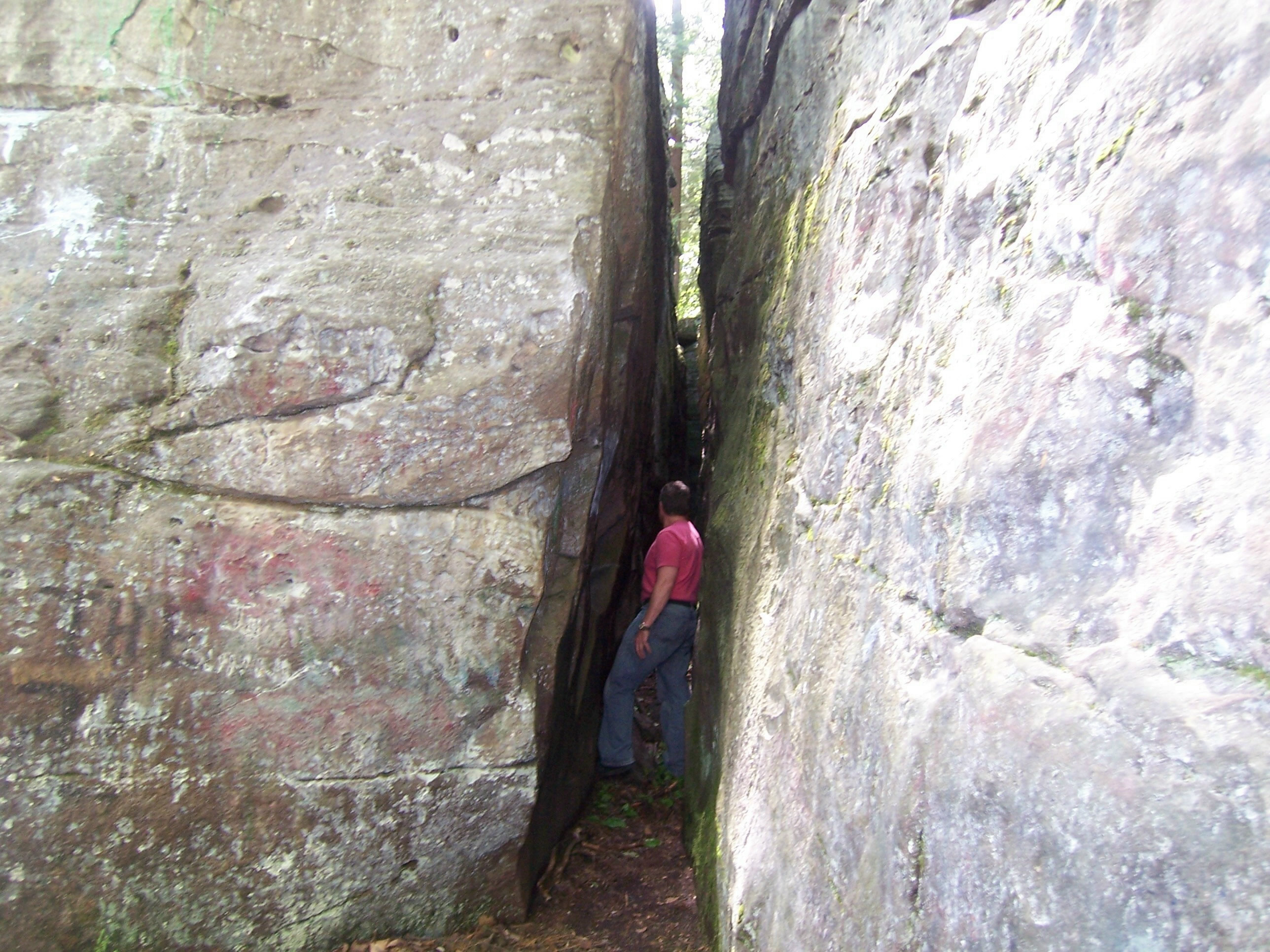 Holly Shok
A view of the narrow crevice called the “Ice Cave” as its cool temperatures allow for ice formation even in June.

The Paleozoic Era wonder was created by "frost wedging," a process that began when frozen water was trapped between cracks which caused the rocks over millions of years to separate from the main mountain. Over time, rain and weather have eroded away the soil between rocks, and gravity has ushered the boulders down the wooded Bloom Township hillside. The 20 to 25 foot thick Homewood Sandstone Member rocks, of the Pottsville formation, are comparable to the size of a house. Many of the rocks stand 30 to 50 feet tall and weigh in at over a hundred tons. The result, therefore, is 20 acres of huge boulders on the 120 acre plot of land, stacked on and around each other creating rock-made "rooms" with narrow crevices and crawl spaces for visitors to squeeze through, climb up, and enjoy. Covered by moss, algae, fungi, and ferns, the rocks are surrounded by rhododendrons, mountain laurel shrubs, and much forest life. The rocks are marked by arrows for visitors to easily find a path through the maze; a white arrow indicates an easy pathway, while a blue arrow indicates a narrow passage which could be a bit harder to squeeze through as the narrow crevices range from 15 inches to 3 feet wide. Frequented by families, rock climbers, practicing technical rescue teams, tour groups, and even Civil War reenactors, Bilger's geology and prehistoric sensation attract a diverse number of adventurers.

The quietly situated megalithic (prehistoric rock architecture) site is known for the "Devil's Dining Room," the main rock made "room" at Bilger's. A tight crevice from the dining room leads to the "Devil's Dungeon" and the "Devil's Kitchen," named after the "devil" in farm culture custom for barren rock land. The Ice Cave is another rock made cavern, with an elevation of 1,700 (10 miles from the Eastern Continental Divide) the cool cave allows for ice formation even as late as June. The Bilger's Rocks Association advises visitors to enter the ice cave with a flashlight due to the dark passage and slippery floor, and to avoid entering the narrow premises at all if one is wary of getting stuck.

For thousands of years the Bilger's Rocks area was inhabited by Native Americans who used the rocks as a form of shelter, placing roofs on top of the giant stones. The majestic marvel was named, although, after the original owner Jacob Bilger, a German settler whose homestead was on part of the rock territory. The Bilger family eventually lost the rocks to J.H. France Refractories in a sheriff's sale. The "rock city" has now been a destination spot for families and fun for well over 100 years. Despite the interest in coal mining, stone quarrying, and brick making in Pennsylvania's past; however, the plot of land has remained pristine and undisturbed. 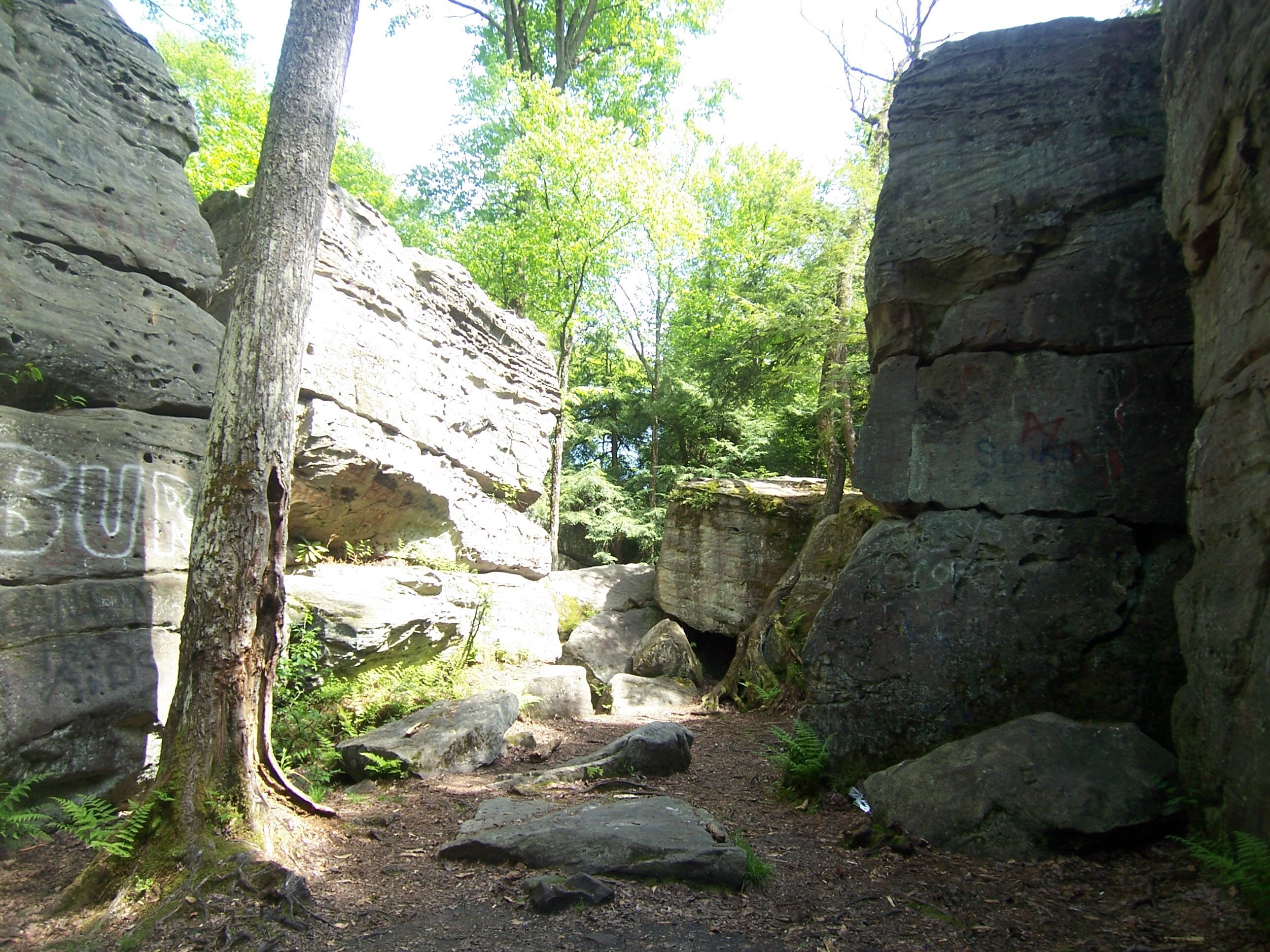 Holly Shok
Inside the largest "rock made room" at Bilger’s, The Devil’s Dining Room.

Bilger's actual boulders on the other hand, have had somewhat of a rocky history. Throughout the ages, many visitors of the enormous sandstones have wanted to leave their "mark." Beginning with chisels, graffiti has marred the natural beauties, many a visitor having etched their message into the rocks. The most elaborate and famous graffito is a 1921 etch of a world map, by Grampian's John W. Larson, and a motto stating, "The World is Looking to Us" inspired by country's role following World War I. The image of a crying woman and a man's head, also representing the state of the country in time of war, was constructed by a female carver sometime after the Larson map. Below the women's head lies the outline of a lonely wolf completed in 1962 by the woman's husband after she died in surgery. A large carving of a hand missing fingers and pointing to the right, also believed to be completed by Larson, still exists today. Another elaborate figure is the carving of an Indian head by Ralph Mahlon in 1949. The final detailed monument is that of a lion, now vandalized, on a solitary rock by an unknown creator.

Eventually, the desecration tool of choice at Bilger's became spray paint and the messages became more easily made and more and more crass. During the 1980s, the once family-oriented lazy Sunday afternoon picnic spot became an area for raucous teen parties. Sadly, the forest of gigantic rocks became victim to party debris, vandalism, and much distasteful graffiti.

In the late 1980s, a group of four concerned residents stepped in to try to preserve the mystical rock mountain. Through much successful fundraising the concerned residents, who quickly became the private non-profit Bilger's Rocks Association, Inc, were able to purchase the land for $37,000 from J. H. France Refractories. Through candy sales, a gourmet dinner drawing, a "family day at Bilger's Rocks" raffle, and even the symbolic selling of an acre for $315, the Bilger's Rocks Association was able to raise the money and completely purchase 170 acres, which included all of the rock territory and some surrounding land, in December 1990. 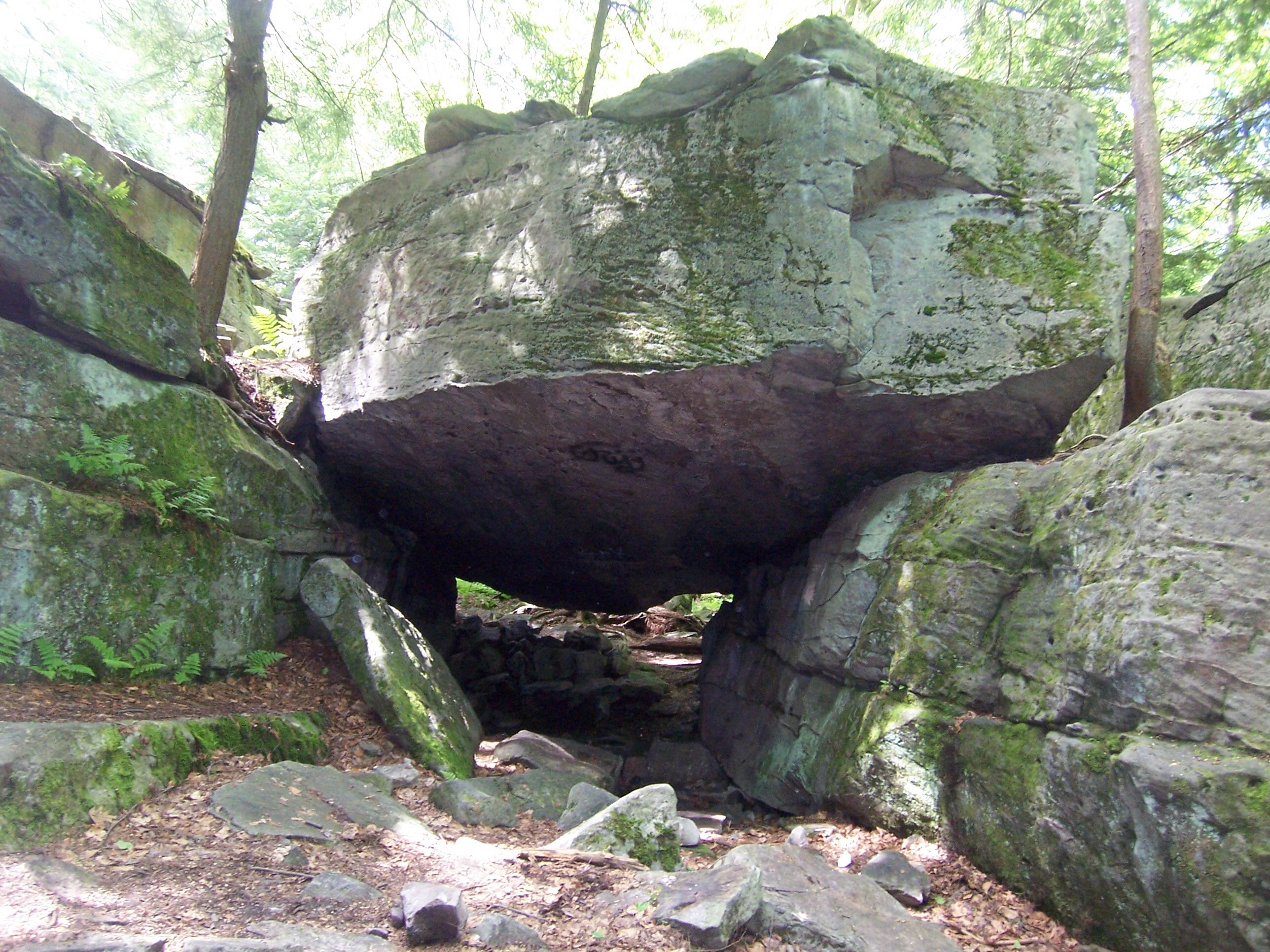 Over time the Bilger's Rocks Association worked hard to turn Bilger's "rocky" state into a once again smooth as stone destination spot. Though the remnants of dark graffiti days are still evident on the rocks, by adding parking lots, picnic tables, outhouses, a kitchen, and a small area for concerts, the group has cleaned up and brought preservation back to the natural wonder. The largest achievement of the Bilger's Rocks Association, however, was evident when families, locals, and visitors to the "Rock City" once again felt safe spending time there. "The ecological, environmental, topographical and historic diversity found in this one unique place pulls curious folks of all backgrounds to this quiet retreat of self-discovery and reflection," said the Bilger's Rocks Association's O'Connor.

Today, the natural wonder continues to attract visitors from all over the world. The forest of huge rocks even hosts events including haunted hay rides, teen dances, and musical entertainment. The site also offers guests the rustic experience of camping at Bilger's Rocks in spots with electricity ($10) and spots without ($5). Of course, the rocks are most commonly frequented by families and locals wanting to enjoy a lazy Sunday afternoon in Clearfield County's rock forest. Like most cities, Bilger's Rocks is still a work in progress. Even after 300 million years, gravity continues to shift and slide the rocks down the mountain. They say slow and steady wins the race and for Bilger's Rocks the race down the hill will take hundreds of thousands of years longer.