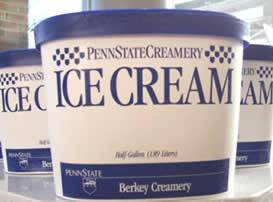 It’s a hot September day at Penn State and over 100,000 fans are cheering on their Nittany Lions at Beaver Stadium. After the game, the supporters undergo the ten minute ritual migration to the Berkey Creamery in order to cheer up and cool down. Throughout the years, the Creamery has become a part of each student’s Penn State experience and is always a major factor when making social plans. Hidden beneath the Peachy Paterno ice cream, however, lays the deeper significance of the Creamery and what it is has to offer. With milk and dairy products as Pennsylvania’s number one agricultural commodities, it has always been a mission for Penn State’s College of Agricultural Sciences to teach, research, and support dairy. In addition, its Creamery and Ice Cream Short Course have made an impact on people throughout the world.

The Creation of the Creamery

Pennsylvania State University started as the Farmer’s High School of Pennsylvania with a vision to use science to improve agriculture. As early as 1865, Penn State began its dairy work with two cows and small dairy structure. In 1889, Penn State received $7,000 for the college’s first academic creamery building, a simple structure near today’s Ferguson Building in the center of campus. The earliest research examined the effect of temperature on the rising of cream when the milk was set. With more advances in research, the creamery was producing more dairy products than the campus needed. Records indicate that in 1869, the college farm sold small quantities of their surplus milk for eight cents a quart, most likely to local farmers who needed it for butter making. Then, by 1890, the campus started to make its own butter.

With growing popularity in dairy farming and the need for more space, the state approved the construction of a new dairy building for Penn State in 1903. Not far from the previous building, the new $100,000 building was finished in 1904. In 1926, it was named the Patterson Building, after William Calvin Patterson, a longtime farm superintendent. This new building contained a small sales space, allowed for more research and development, and provided more advanced equipment to aid in the dairy making process. This new equipment allowed for more studies in diverse and vital areas. Since Pennsylvania led the nation in butter production in the early 1900s, further research into this field was essential. By 1908, the “State College Creamery,” as it was then called, sold the butter it produced to Philadelphia and Scranton. 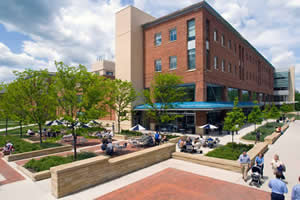 Sales in 1914 grew to $85,000, which led to the purchase of new equipment. In 1919, Andrew Borland headed the Dairy Husbandry Department and the number of faculty, students, and research projects continued to grow. Construction on a new Dairy and Creamery building began in 1931. After its completion in 1932, the new Borland Lab changed the dynamic of the Creamery from a commercial dairy business to a largely on-campus only operation. However, in 1937, private dairies protested that the creamery represented unfair competition, so the Creamery limited their products to on-campus dining halls, the Nittany Lion Inn, the student union, and their own second floor sales room.

Borland Lab continued to grow and prosper, and by 2002, there was a need for even more space for research. In August 2006, a $46 million Food Science building was constructed and named after Earl K. and Jeanne Claycomb Berkey. A modern space with an old parlor feel, the new lab sits in a perfect location to hot spots like Beaver Stadium and the Bryce Jordan Center as well as being adjacent to the heavily populated East Dormitory complex.

In addition to selling its goods, the Penn State Creamery offers courses in the making and manufacturing of various products. In 1892, the Creamery offered the first two instructional diary courses. One was an eight-week course for men held in January. The other was a shorter four-week course held in March for private dairy owners who, because of their farming schedules, could not afford to spend much time outside of work.

Wilbur A. Tharp, of Tharp’s Ice Cream, took the short course in 1923. When he took the eight-week course, he explained that by that time dairy cattle and dairy feeding were no longer in the curriculum. Instead, for eight hours a day and six days a week, he learned about milk and cheese manufacturing, butter and buttermilk making, dairy refrigeration, and, of course, the ins and outs of ice cream production.

This dairy manufacturing program became so popular that a condensed, two-week version that specifically focused on ice cream was created in 1925. They also initiated a one-week course for salesmen who sold products to local Pennsylvania dairies and ice cream plants. In 1949, with this continued growth, the ages of the students ranged from 16 to 60. Not only did they flock from every state in the union, but there were also three international students enrolled from Canada, Nicaragua, and China. 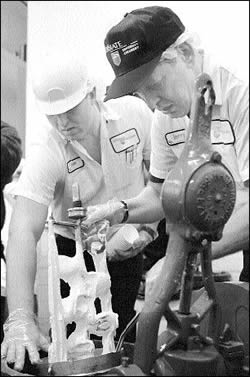 By the 1970s, ice cream “dip stores” like Häagen Dazs and Baskin-Robins were becoming popular. Due to the frozen dessert’s increase in popularity, the ice cream course began to grow in numbers. The number of students enrolled in the course expanded to as much as 150 students in the 1990s. Representatives from almost every major ice cream producer were sent to Penn State to take the course, including members from Baskin-Robbins, Borden, Breyers, Haagen-Dazs, Hershey’s Ice Cream, and Good Humor. Ben Cohen and Jerry Greenfield, of Ben & Jerry’s, both took the $5 correspondence course offered by the Creamery. In 1978, soon after completing the course, they began their now famous ice cream company.

Because it covers a wide variety of information, many different people choose to take the course. In 1987, Charles R. Hogg, the production control manager of a Baskin-Robbins plant in Burbank, California, said, “I came to get an overview of ice cream manufacturing in a condensed study of ice cream.” He believed that by taking the course he could improve manufacturing processes such as sanitation and quality assurance. However, this course also calls to individuals who simply enjoy making ice cream and want to learn more.

Today, the Creamery’s Short Course has a much more modern approach than the original one. The course today covers ice cream composition and flavors, microbiology, regulation, and sanitation. It also incorporates lab demonstrations that focus on sensory evaluation of ice cream, freezing techniques, and computer assisted formulation. To date, over 4,000 people have graduated from the program, including international students from every continent except Antarctica.

Ice Cream Around the World

Penn State is known nationally and internationally for its innovations in dairy production. Due to its accomplishments, the Berkey Creamery has been featured on both the History Channel and the Travel Channel. In addition to influencing people nationally and internationally, the Creamery and its short course have had the most influential impact on the Penn State Campus. Thomas Palchak, a manager at the Berkey Creamery, explained the relationship between the Creamery and the campus quite nicely: “The Creamery means so much more to Penn State than what most people understand it to be. It’s a very deep relationship, an enduring part of this University, one that means much to the students here and their friends and visitors.” Perhaps that is why former president Bill Clinton, a self-proclaimed “big Penn State Fan,” made a stop at the Creamery in August 2000 and had a scoop of Peachy Paterno and Cherry Quist. He was the first person ever permitted to have two different ice cream flavors on one ice cream cone. 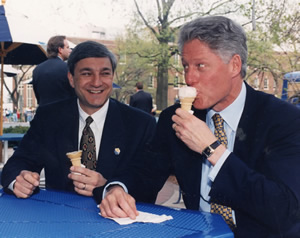 The careful handling of the fresh ingredients may be a reason why the Creamery ice cream has become a classic. The dairy cows, which are essential to the ice cream process, are kept one mile away from the Creamery. On average, these cows produce about eighty pounds of milk per cow, per day. As the cow is being milked, the milk goes into a filtering system. From there it reaches a pre-cooler that brings the temperature down to about 50-60 degrees Fahrenheit. It is then pumped into the vault tank, which brings the temperature even further down to 38 degrees Celsius. Every 48 hours a truck pumps the milk from the vault and takes it to the Creamery to be used in products. Dr. Robert. F. Roberts, associate professor of Food Science at Penn State and Director of the Ice Cream Short Course, said that they are unique from other creameries and ice cream brands in that “it is owned by the University, the product is very fresh, and we are able to make small batches of unique flavors.” He also explained that many people believe the Berkey Creamery ice cream is too high in fat and that is what permits it from being sold off campus. This, however, is false. The ice cream is available for sale everywhere in the United States and it only has 14% fat content, an amount substantially lower than other competitors like Häagen Dazs and Ben & Jerry’s.

The Creamery’s character has followed it throughout the years, guiding more and more people to sample its various flavors. Each year, the Creamery produces about 225,000 gallons of ice cream, frozen sherbet, and yogurt. During that year, employees hand dip about 750,000 ice cream cones. Flavors include Peanut Butter Marshmallow, Bavarian Raspberry Crunch, and Keeny Beany Chocolate. It also has many Penn State inspired flavors, such as WPSU Coffee Break (named for the campus’ public radio and television stations), Berkey Brickle (named for the donors of the newest Creamery building), and of course, Peachy Paterno (named for the school’s legendary football coach).

The Creamery has been a successful establishment since the late 19th century and has only grown since. There is no doubt that with the hard work that goes into it, the Creamery’s reputation will continue to flourish. When describing the ice cream at Penn State, the late Erma Bombeck, of the ABC-TV program Good Morning America, said it best, “The stuff comes close to being a religious experience…I never hope to have better.” Bombeck sampled vanilla, chocolate, and mint on January 16, 1986. Twenty-three years later, the ice cream has only improved.