On Sunday morning we arrived at the foot of the mountain, which is crossed by railroad. There are ten inclined plains; five ascending, and five descending. It was very pretty traveling thus at a rapid pace along the heights of the mountains in a keen wind, to look down into a valley full of light and softness; catching glimpses, through the tree-tops, of scattered cabins; children running to the door; dogs bursting out to bark, whom we could see without hearing; terrified pigs scampering homeward; families sitting out in their rude gardens; cows grazing upward with a stupid indifference; men in their shirt sleeves, looking on at their unfinished houses, planning out tomorrows work; and we riding onward, high above them, like a whirlwind.
— Charles Dickens, American Notes for General Circulation 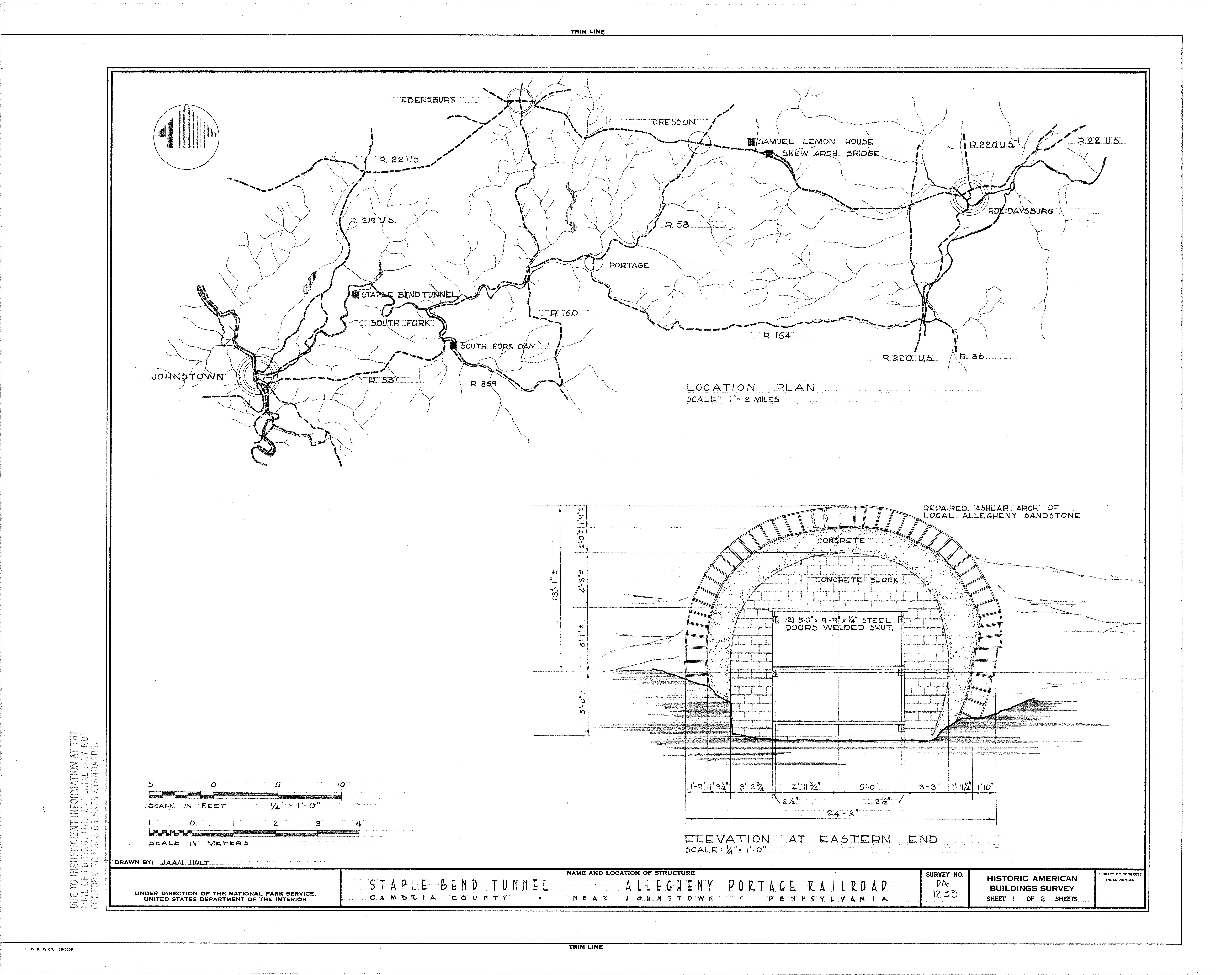 Jaan Holt, Library of Congress
The Allegheny Portage RR traversed the Allegheny Mountains near the site where the Horseshoe Curve would later allow trains to ascend under their own power.

The Allegheny Portage Railroad was the first railroad built across the Allegheny Mountains with intentions of connecting all of central Pennsylvania to the major commercial waterways of the Potomac, the Ohio, and the Hudson and as well as with those of the Delaware and Susquehanna. This incredible network of rail, canals, and inclines stretched from Hollidaysburg, Blair County to Johnstown, Cambria County, and covered a span of 36 miles. Considered one of the great engineering marvels of its time, the Allegheny Portage Railroad operated for almost two full decades, helping to move products from Philadelphia to Pittsburgh.

In the early 1800s, goods going from Pittsburgh to Philadelphia, just 400 miles as the crow flies, would “take the long southern route of a couple thousand miles and up to six weeks to reach the Gulf of Mexico before traveling up the East Coast, simply because this was cheaper and more established than crossing the rugged Allegheny Mountains,” as historian of the Railroad Chris Lewie put it. In response to petitions for public improvements for Pennsylvania, the Canal Convention met in Harrisburg, Pennsylvania on August 25, 1825 to explore various route options for a canal that would connect Harrisburg to Pittsburgh. Later, in 1826, the General Assembly voted to have this proposed Pennsylvania Canal constructed.  In the following years, many land surveys were developed to show possible routes by which the Allegheny Mountains might be crossed in the most efficient manner. In December 1828, Moncure Robinson was employed to make a new survey of Allegheny Mountains and to plan a railroad that would cross this barrier. The board accepted Robinson's proposal of five inclined planes on the east and five on the west slopes of the mountain range, and built on his idea in 1830 by asking Stephen Harriman Long to help explore additional options. 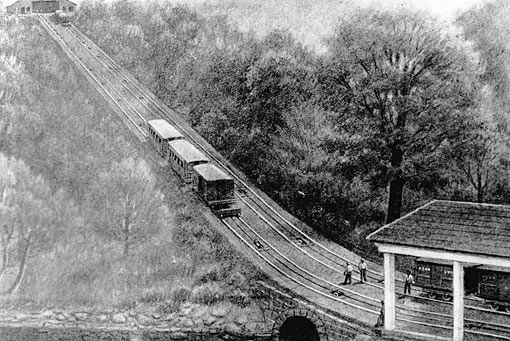 Funicular.com
Cars being hauled up the mountain in the heyday of the Railroad.

Robinson’s plan was approved in May 1831 and construction of this historic railway began. The Allegheny Portage Railroad would now span 36 miles, consist of ten planes with ten stationary engines at their crests to move the canal boats up and down the slopes, and a stone viaduct that would cross the Little Conemaugh River.  This plan also consisted of a nine hundred foot tunnel, a skew arch bridge, smaller bridges, and eleven levels.  The railway would rise 1,398 feet above the canal at Hollidaysburg, and 1,171 feet above the river basin at Johnstown. Construction lasted three full years under the supervision of President James Clarke of the Canal Board, Samuel Jones, and chief engineer Sylvester Welch.

Construction ensued and forests were cut down to clear space and provide timber for railroad ties. A bridge comprised of two stone arches crossed the Beaver Dam Branch of the Juniata at Hollidaysburg and was completed in 1833. Four miles away at Staple Bend, America’s first railroad tunnel was constructed. This massive tunnel covered nine hundred feet in length.  Also at this time iron tracks were laid on the ten incline planes and eleven levels, and sheds were built to shelter stationary engines and cable sheaves. 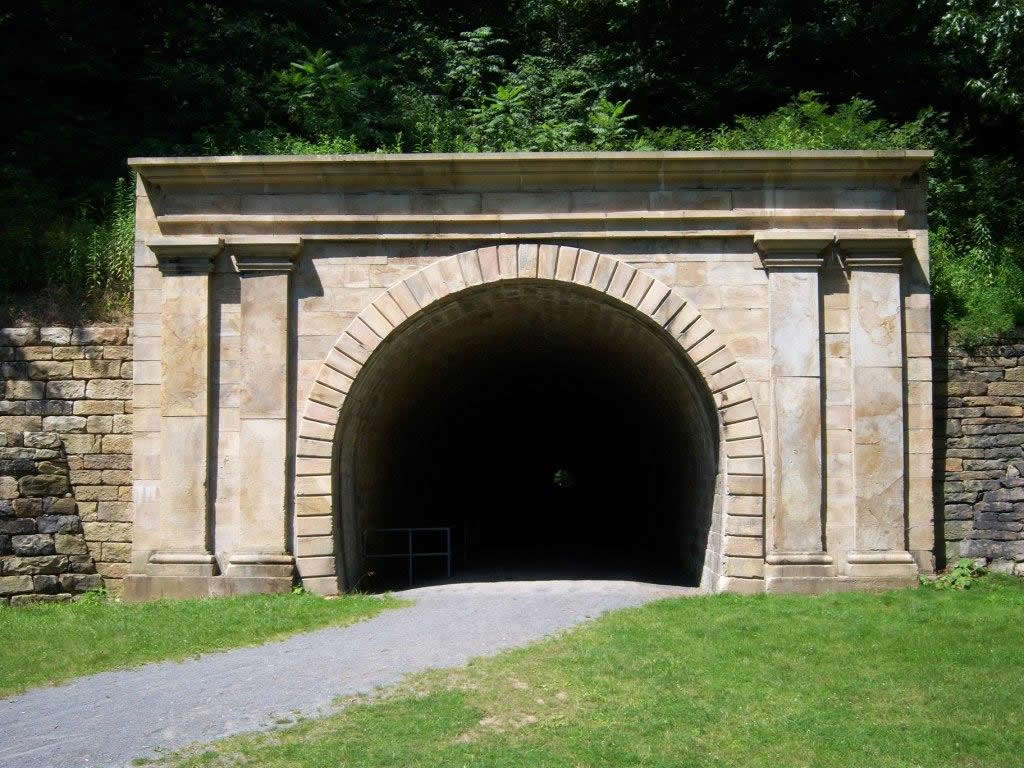 On March 18, 1834 the first track of this railway was officially put into operation and the use of hemp ropes three and a half inches in diameter and 2,960 to 6,234 feet long were put into use on the planes. These massive ropes, used for drawing up or lowering burdens at different angles, totaled over 11 miles in length and weighed roughly 118,649 pounds. Within the year, talks about upgrading began, and a second track of the Portage Railroad was put into service. Also during this time period, canal boats were beginning to be placed on railroad cars. As the sight of boats being dragged up and down the hillside became more common, a call for newer, stronger ropes began. The old ones had begun to rot and snapped at the boat inclines.

Captain Thomas Young, owner of the most used boat incline, called for a stouter rope capable of carrying out these demanding activities. At this request, John A. Roebling, the civil engineer who made the initial designs for the Brooklyn Bridge, set out for the railroad to use wire rope that he had been working on. With wire bought from Pittsburgh, Roebling produced a six-hundred foot wire rope of an approximately one-inch diameter, and installed it at Captain Young's Johnstown boat slip. Eventually lengths up to 6,400 feet went into use on all the planes of the Portage. While extremely successful in replacing the fraying ropes, the wire ropes were very costly. The sheer weight of the ropes forced the rebuilding of foundations at stationary engine sheds. Roebling eventually became famous as the engineer whose invention was used for suspension bridges and the Delaware River Aqueduct, and the Allegheny Portage Railroad was the first place this invention was used to help solve the problem of needing stronger ropes. 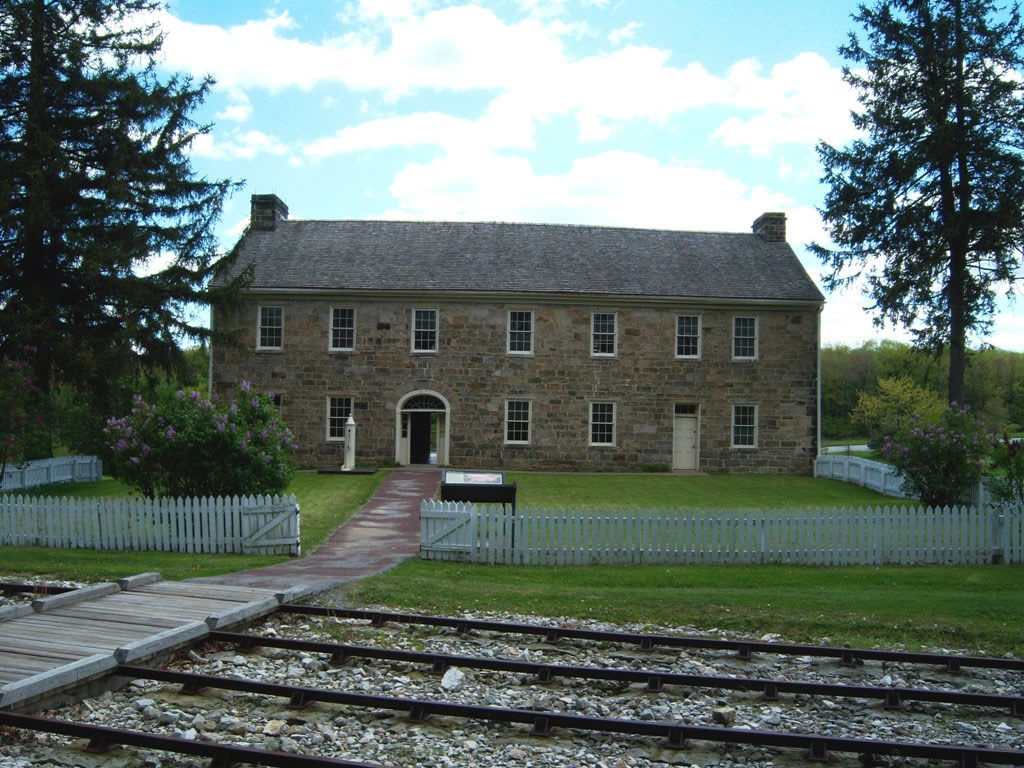 National Park Service
The Lemon House is home to the Historic Site's offices and was once a tavern serving passengers on the Allegheny Portage Railroad.

In 1839-1840 the State of Pennsylvania began to explore additional options for crossing the mountains. Engineers began to search for new routes in hopes to create a railroad over the mountain without using the dangerous incline planes. In the 1850s the state of Pennsylvania began to invest in the building of the New Portage, which would eliminate the inclines for good. This New Portage Railroad was never completed before the Pennsylvania Railroad Company completed its own railroad in 1854. Pennsylvania found itself unable to compete with this new rail company, and in 1857 it sold to the Pennsylvania Railroad the Main Line of its Public Works. This included both the Old and the New Portage, and activity ceased as these older railways were abandoned.

The Allegheny Portage Railroad was an incredible achievement in early travel, and even boasted of carrying the likes of several famous individuals. Charles Dickens, Jenny Lind, and Ulysses S. Grant all traveled over the Allegheny Mountains on this rail system that had a reputation of being dangerous due to its daily accidents. This intense series of inclined planes and a nine hundred foot tunnel carved through the mountain made this feat possible. 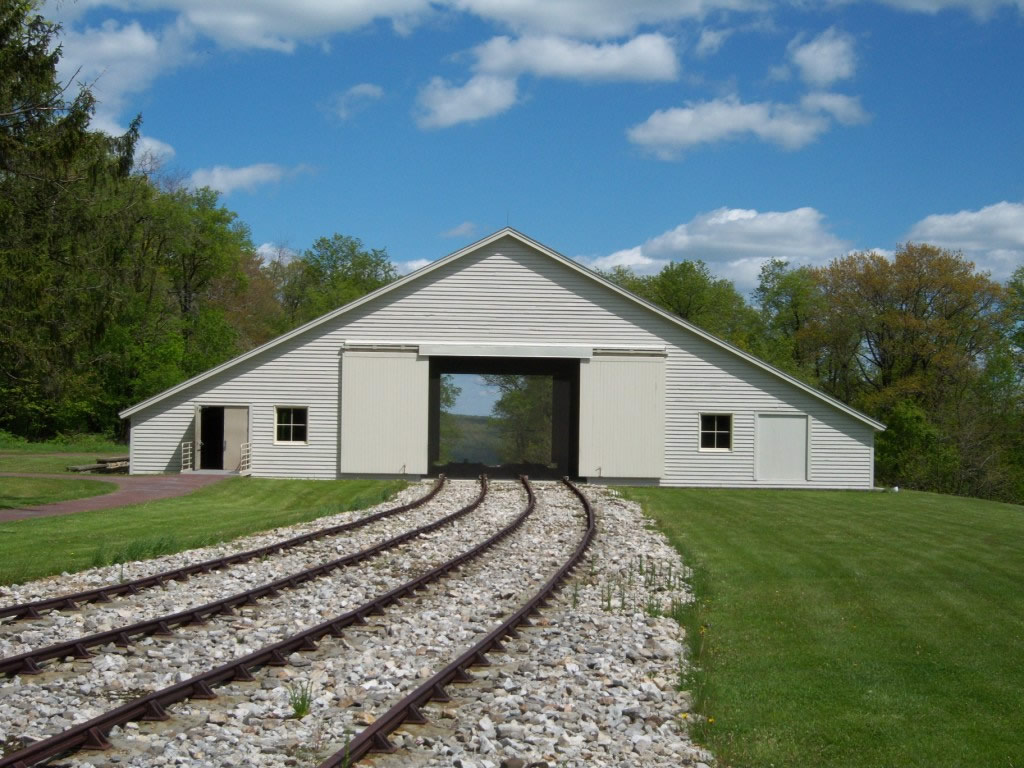 National Park Service
Engine Houses, like this one, Number 6, sheltered the stationery engines used to pull cars up the slopes.

Today the National Park Service offers a variety of interesting exhibits to see at the Allegheny Portage Railroad Museum in Cresson, Cambria County.  Visitors can tour the nearby Lemon House, which was a historic tavern built by Samuel and Jean Lemon in 1834 to accommodate travelers and workers with food, drink, and lodging. The National Park Service also invites tourists to check out the Engine House # 6, a replica of one of the many buildings that made up the original Portage Railroad. Movies are screened in the visitor center, where visitors can also read, and explore the different exhibits and models on display.  Finally, just a few minutes’ drive up Old Route 22 lies the skew arch bridge, a masterfully cut stone marvel that was built in 1832 to carry traffic over the Allegheny Portage Railroad.

The Center would like to thank Doug Bosley and Megan O’Malley of Allegheny Portage Railroad National Historic Site for their help with this article.