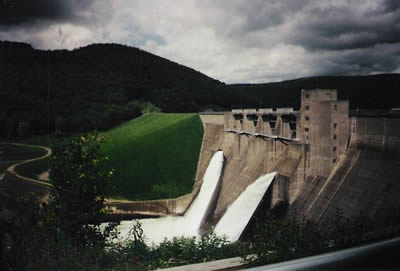 In June 1972, the remains of Hurricane Agnes poured rain on northwest Pennsylvania. Indeed a rare occurrence, in a few days Pennsylvania received an average of 6-10 inches of rain. This extreme and unexpected weather caused severe damage all along the rivers of Pennsylvania. Luckily, a new dam, built less than a decade before, prevented about $1 billion in damage along the cities on the Allegheny River.

Along with flood control, the Kinzua Dam has brought other benefits. It is able to produce a maximum of 400,000 kilowatts per hour in hydroelectric power and is considered one of the largest and most popular outdoor recreation areas in the Northeast United States for its various recreational opportunities. Attractions include the Wolf Run Marina, Kinzua Beach, several camping grounds, and many hiking trails.

Located on the Allegheny River in Warren County, the concrete and earth embankment dam stands 179 feet tall, 1877 feet long, and 1245 feet wide. The lake created by the dam has a normal elevation of 1328 feet and is 24.2 miles in length with a total of 12,080 acres in area in Warren and McKean Counties in Pennsylvania and into New York State.

Built 1966, the Kinzua Dam was authorized under the Flood Control Acts of 1936 and 1938. The dam was constructed to protect Pittsburgh and reduce flood levels in the Ohio River Valley after a series of floods devastated Pittsburgh, Johnstown, and other cities downstream the Allegheny River.

The Kinzua Dam was constructed under supervision of General John S. Bragdon, director of President Dwight D. Eisenhower's Office of Public Works Planning, and was built by the Army Corps of Engineers.

At of cost of $108 million, the dam was a huge expenditure for the government at the time. The budget of the project was increased several times by President Eisenhower, but the dam proved its worth and capabilities when it saved an estimated $274 million in flood damage from Tropical Storm Agnes in 1972. To date, the Kinzua Dam has prevented over $1 billion in flood damages.

Today the benefits of Kinzua Dam are obvious, but starting as early as the 1920's the idea of building the dam was heavily protested, primarily by the Seneca Indians whose Cornplanter Tract was situated in the "take area" that was to become part of the reservoir. This area to be taken from the 130 families in the tract that was the last part of the Seneca land left in Pennsylvania.

The Seneca Indians' battle for their ancestral land, led by their attorney Edward O'Neill, was based on the Pennsylvania grant of territory in 1791, in which Chief Cornplanter's people were granted title to lands in northern Pennsylvania in perpetuity in gratitude for his work to forge peace in the western part of the state. Many alternatives to the dam project were studied in order to satisfy the Seneca's objections, but the battle ended on November 25, 1958 when three judges of the United States Court of Appeals for the District of Columbia unanimously denied the Senecas an injunction against the Army.

The loss of their legal battle and the seizure of their land were traumatic for the Seneca Indians; they refer to their relocation from the "take area" as the second "Trail of Tears," alluding to the forced removal of the Cherokee, Choctaw, Creek, Seminole, and Chickasaw nations from the Southeast. The government, however, has done their best to compensate the affected tribe, providing them with suburban housing, as well as $15,000,573 to cover direct damages caused by land loss, compensation for relocation expenses, loss of timber and destruction of wildlife, cemetery relocation, legal appraisal fees, and "rehabilitation" for their economic development, education, and housing.

The plight of the Senecas and the Cornplanter Tract has been recognized by musicians. Sympathetic portrayals of the Senecas can be found in songs from the time such as Johnny Cash's 1964 song "As Long as the Grass Shall Grow," and Buffy Sainte-Marie's songs, "Now That the Buffalo's Gone" (1964) and "My Country 'Tis of Thy People You're Dying" (1966). These songs will forever remind us of the hardships faced by the last of Pennsylvania's Seneca Indians.

Photo of Kinzua Dam by "Ivo Shandor" released for public use at Wikimedia Commons.