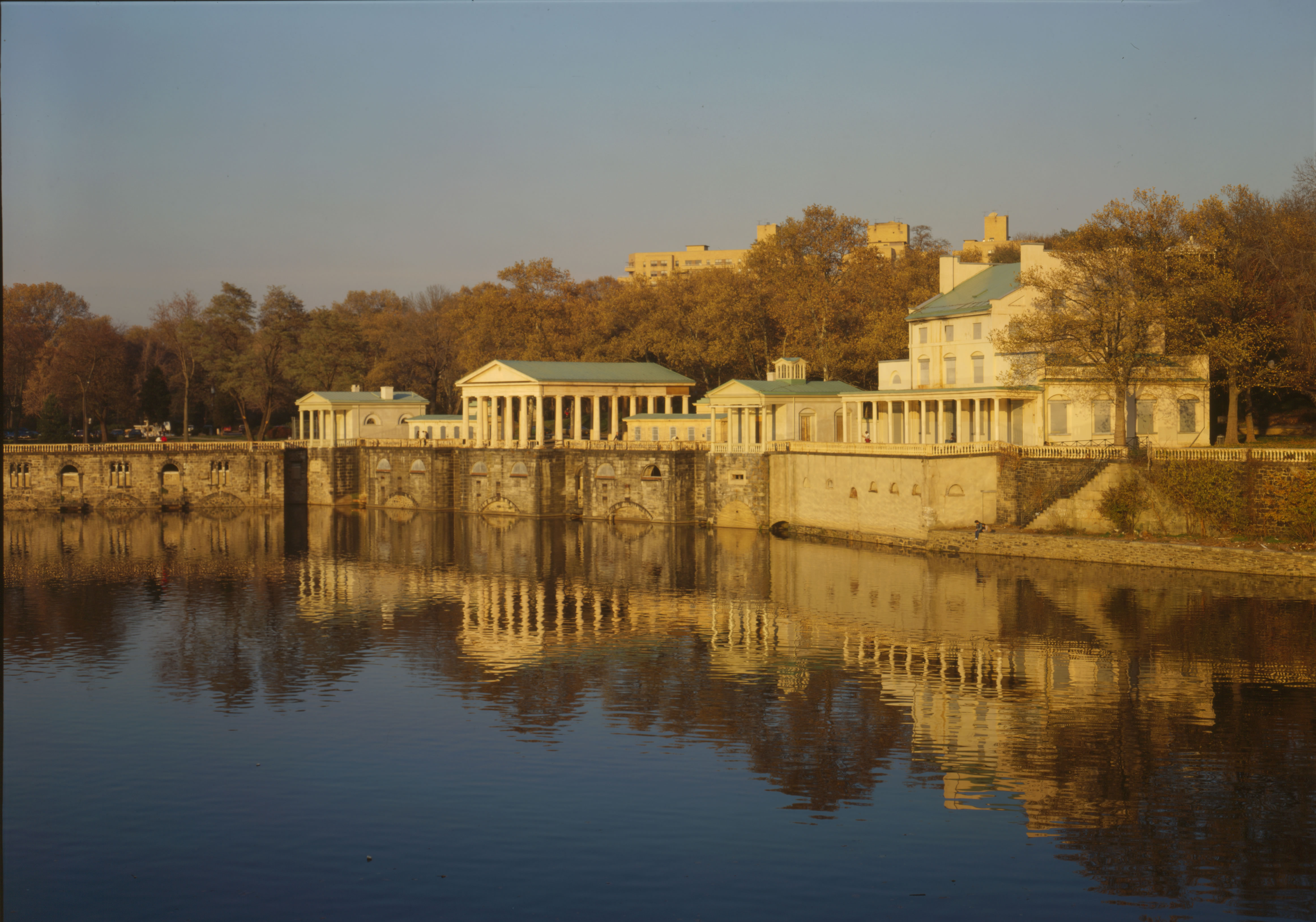 Jack E. Boucher / Library of Congress
The main building of the Fairmount Water Works after its restoration. The Water Works has been an engineering and architectural marvel for nearly two centuries.

The year was 1793. Philadelphia, the burgeoning capital of the United States of America, was under siege. Piles of waste and filth, both human and animal, lay rotting, strewn across the city’s cobblestone paths. The rank stench of decaying matter clung like an oppressive fog to the city streets, which were rife with those dying from the yellow fever epidemic. The city government decreed that the streets should be washed zealously to remove the buildup of grime, but Philadelphia had barely enough water to provide for its citizens, much less to clean the streets. The only accessible water was only available because it was even more unsanitary than the filth on the streets—spoiled and fouled by waste from the city sewers and cesspools. Philadelphia’s preeminent citizen, Benjamin Franklin, wrote not four years prior that “in Philadelphia, everyone has a cistern and a well, and the two are becoming indistinguishable.”

Faced with the shortage of clean, usable water, the city turned to its primary artery, the Schuylkill River for salvation. Two pumping stations were constructed in 1801, which pumped water from the Schuylkill to the city. However, the small pumping stations could not keep up with the demands of a growing city, so in 1805 the Philadelphia Watering Commission set out to design a larger water works—a system consisting of reservoirs, holding tanks, buildings, pumps and pipes that would supply Philadelphia with clean water. 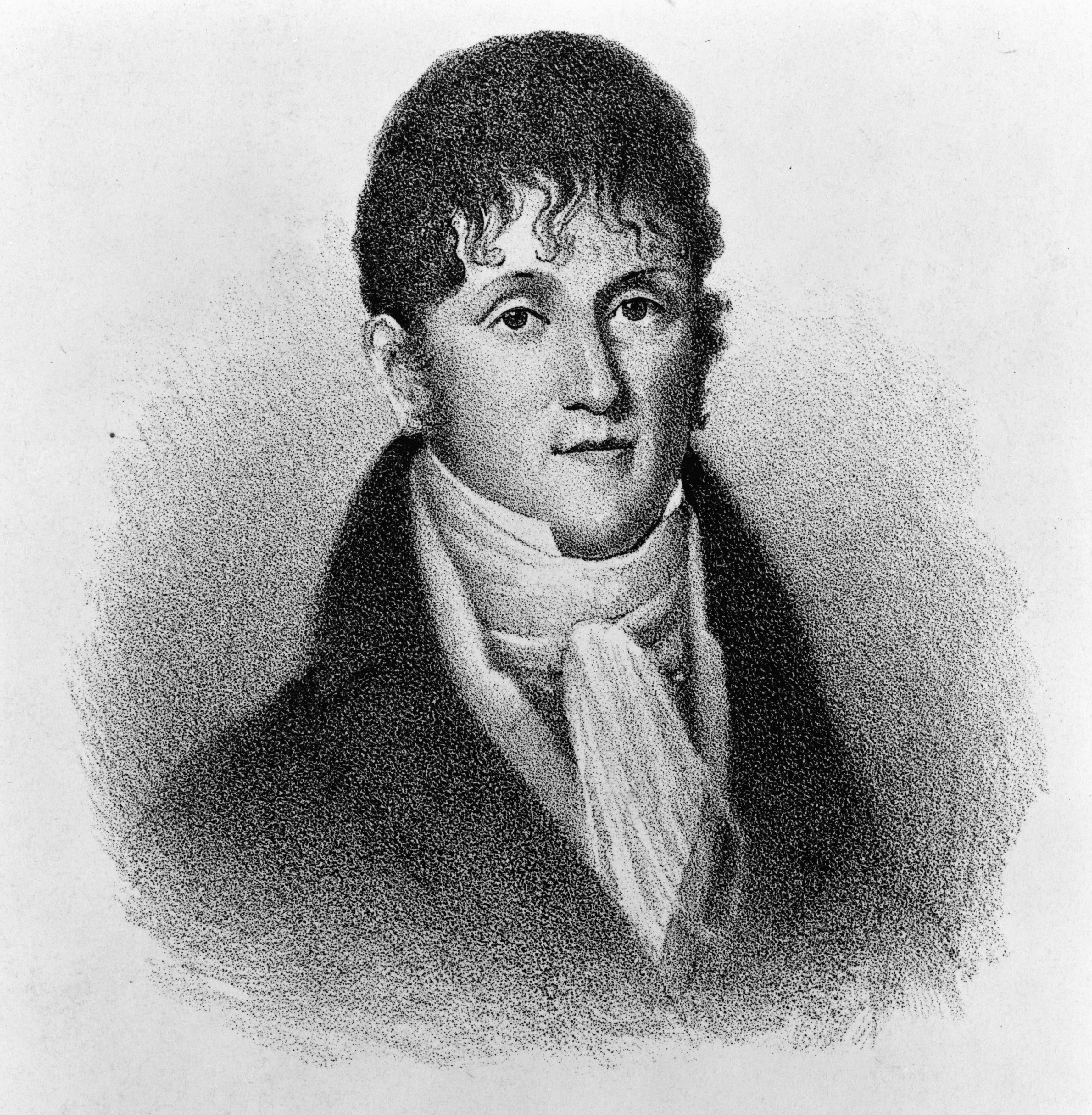 Under the direction of chief engineer Frederick Graff, the committee laid out an audacious plan: a series of marble-sheathed buildings would be constructed in the Federal and Greek styles to house the world’s first high-pressure steam engines. These engines would burn coal and firewood, heating water to generate steam in order to turn several steam turbines. These turbines would force water, diverted from the Schuylkill River, into a reservoir at the top of the “Faire Mount” bluffs from which the entire complex received its name. The reservoir would then use the power of gravity to transport clean, potable water to the city on demand.

The city did not stop there: reminiscent of Roman design almost two millennia prior, Philadelphia decided on another landmark feature. The city, conscious of the prevailing national fondness for pastoral country life, surrounded the compound with formal gardens reserved for citizens to use for their leisure, creating a unique blend of rustic charisma and new technology that became the envy of the world.

This unique synthesis of new and old prompted a surge in artwork and photographs of the place. After a visit in 1842, the English author Charles Dickens noted, “In Philadelphia there is a place that is wondrous to behold, and that is the Philadelphia Waterworks.” The Fairmount Water Works became a symbol of Philadelphia, and by extension, of the United States. Visitors from across the nation and from overseas came to Philadelphia to marvel at what everyone knew to be the cleanest, most efficient and elegant solutions to one of civilization’s most basic needs. 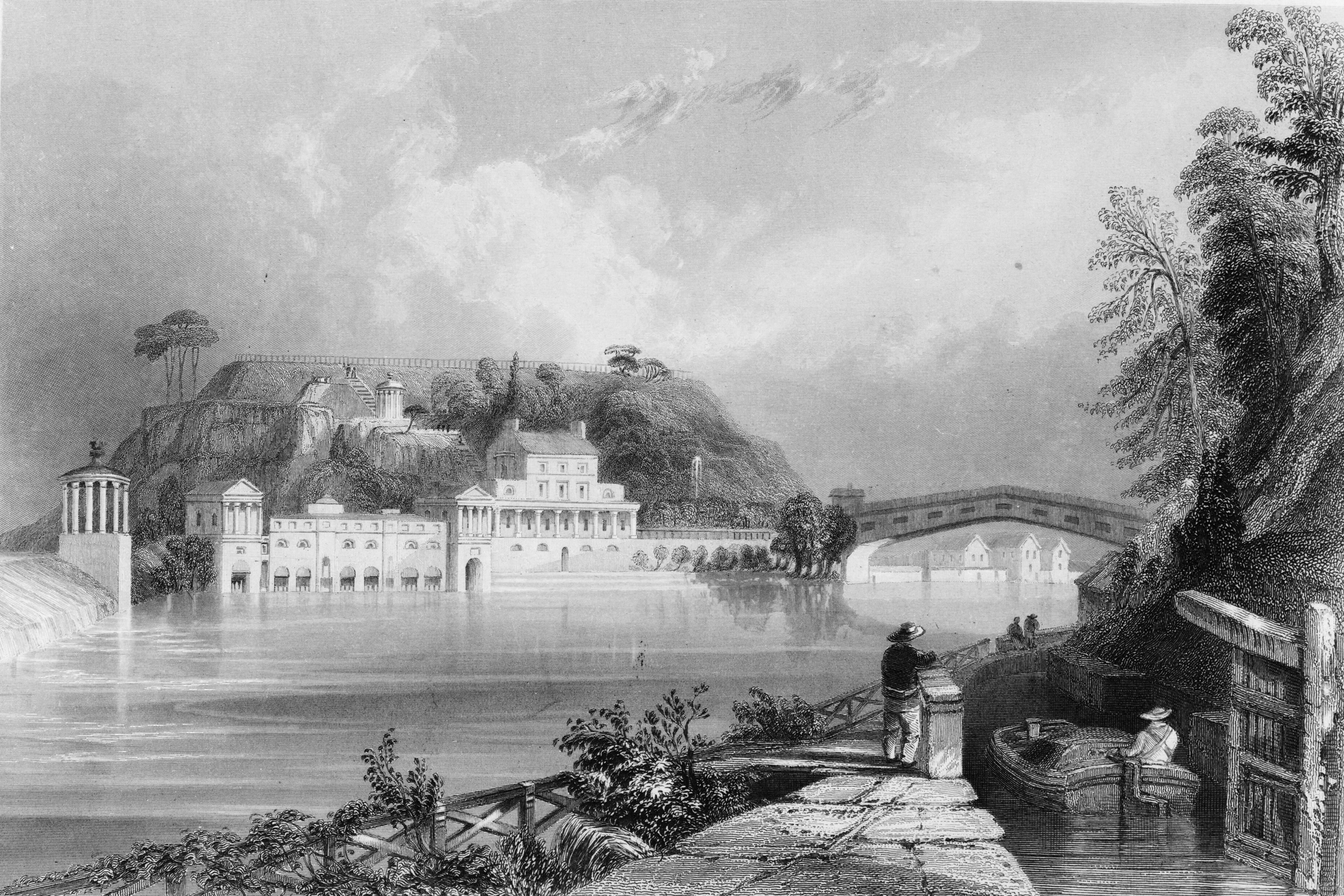 W.H. Bartlett / Library of Congress
This engraving of the Fairmount Water Works from 1835 captures the sense of wonder with which most people viewed the site in the 19th century. This is a view over the southeast reservoir, featuring the "Bridge of Sighs" to the right.

Many visitors flocked to the Fairmount Water Works: not only did water supply engineers visit the site for firsthand knowledge from its engineers, but tourists visited the gardens around the facility, lounging by the verdant blooms as they watched the water flow over the dam. Newspapers such as the Haverhill Gazette of Massachusetts, about three week’s travel by horseback, took care to have travelling correspondents cover Philadelphia. Even important foreign dignitaries were invited to visit this hallmark of American ingenuity and engineering: in the October 25, 1881 issue of the Philadelphia Inquirer, United States President James Garfield laid out plans for visiting French and German ambassadors “to take luncheon” at the Fairmount Water Works after a visit to Philadelphia.

However, the Fairmount Water Works did not just rest on its laurels. In 1819, the city council concluded an agreement with the Schuylkill Navigation Company for the right to construct a dam across the Schuylkill River and to purchase the right to the water power, turning a section of the river into a small freshwater lake used for recreation and transportation. In 1822, the first of a series of waterwheels replaced the costly and loud coal-powered steam engines, taking over the role of raising the water from the Schuylkill to the reservoirs. By 1843, a total of eight waterwheels were finished, which supplied the city with an average of 5.3 million gallons of fresh water a day, at an shockingly low cost: the city of Philadelphia spent a total of $29,713 to run the facility in 1844, a significant decrease compared to the $30,858 spent in 1819 after increasing population and inflation are taken into account. 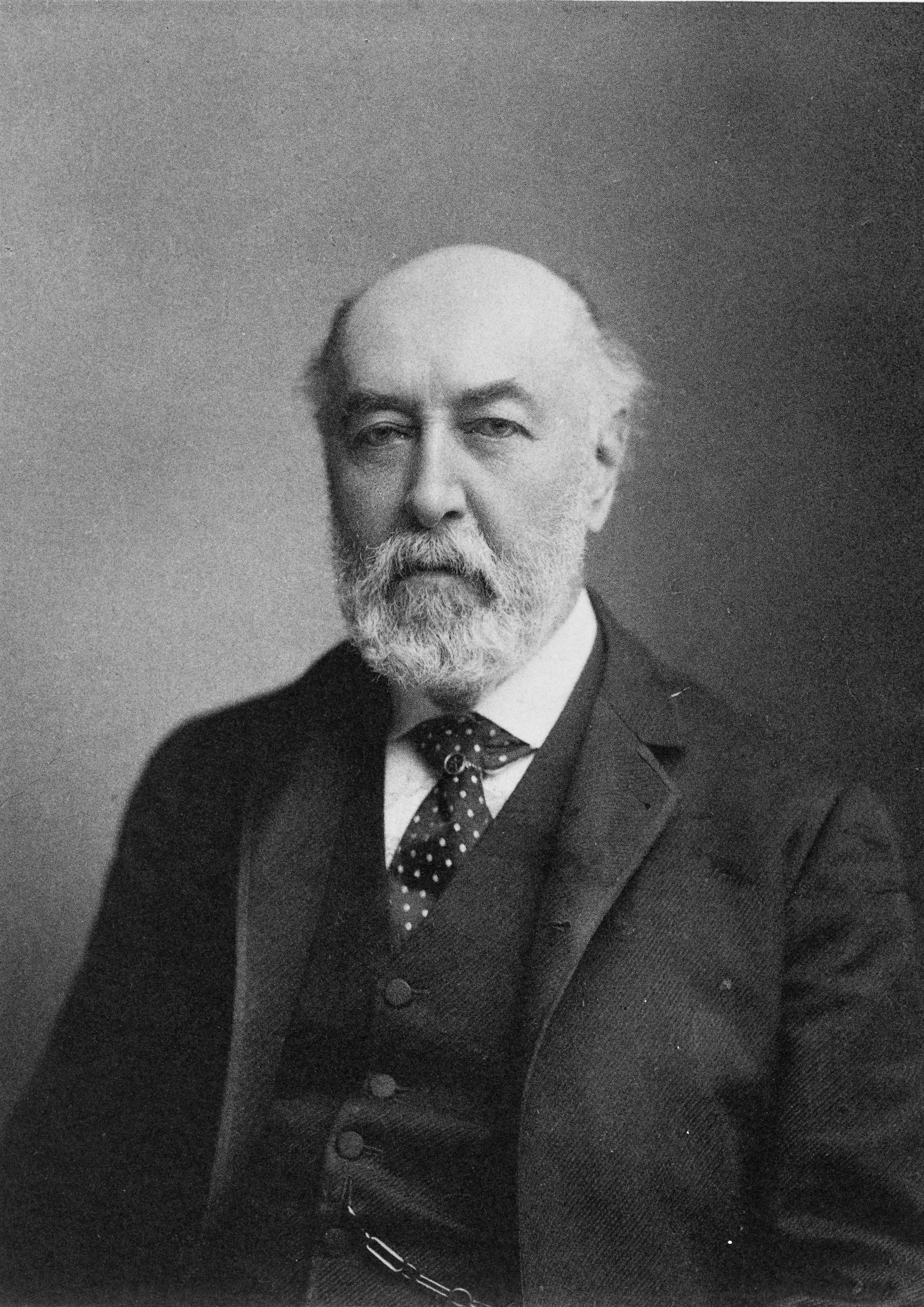 In the latter half of the 19th century, another major “first” took place at the Fairmount Water Works: Frederick Graff’s son, Frederick Jr., realized that, for all of its vaunted efficiency and efficacy, there was a serious problem with the water works. Fairmount Water Works was located on the eastern bank of the Schuylkill River, which fed into the Delaware River and emptied into the Delaware Bay. Due to the proximity of the water works to the bay, twice a day at high tide, water in the bay would flow backwards into the Delaware and Schuylkill Rivers, stopping the water wheels from turning correctly.

The younger Graff decided to treat this problem by taking a page out of his father’s book: he chose to innovate. Rather than trying to fix the original design of the water wheels, which used the flow of water downstream, he chose to be the first to implement a radically new design, and install an experimental French turbine known as the Jonval engine.

The Jonval engine differed from other conventional hydropower designs because it used a completely different method of turning the engine shaft. By setting up a vertical watertight column in which the Jonval turbine wheel was laid flat below the low tide mark, water fed into the column would fall vertically onto the wheel’s curved blades, forcing it to turn the vertical shaft of the engine. This method was so successful at circumventing the twice-daily idle periods of the water wheels, that by the mid-1870’s, the water wheels had been replaced by six Jonval engines. 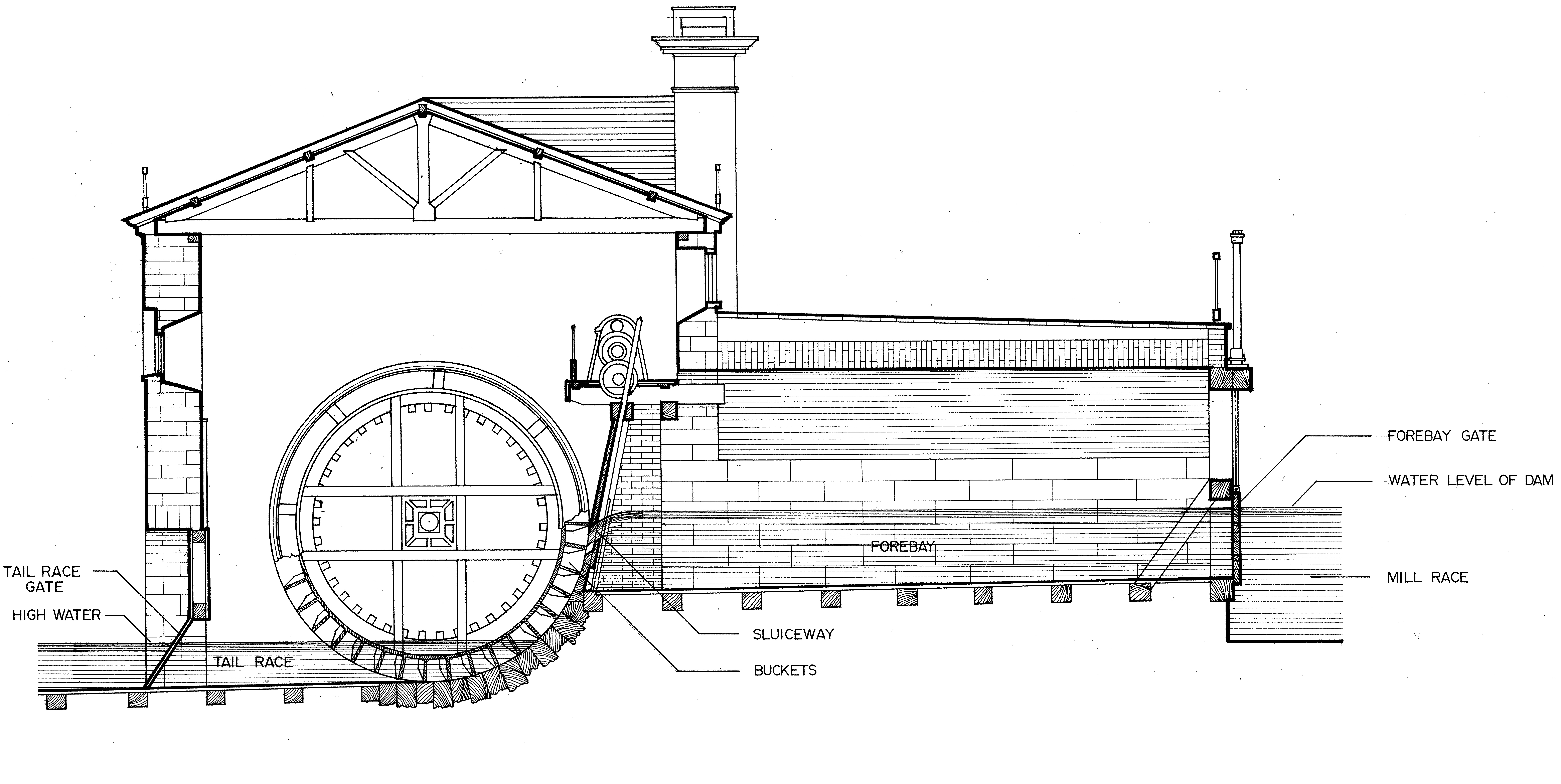 HAER / Library of Congress
This cutaway view of the water wheels demonstrate how the wheels were turned, regulating the water flow.

However, a new threat arose: as urbanization increased and technology advanced, more and more people began to treat the Schuylkill River as a convenient method of disposing of waste. Industry such as coal mines and cattle farms upstream tossed waste into the river, turning Philadelphia’s primary source of drinking water into a sewer. Pollution of this precious resource threatened the continued operation of the Fairmount Water Works and the city’s reliance on its waters.

Concerned, the citizens of Philadelphia and neighboring municipalities took a stand: over 2,400 citizens petitioned the city council, demanding that Philadelphia purchase the land around Fairmount Water Works and its dam, as documented in The North American newspaper’s October 30, 1843 issue:

The Fairmount Water Works were constructed at great cost… although trifling compared with the advantages which the city has enjoyed from an abundant supply of pure water. If there was ever reason to construct these works, the same reason still exists to maintain [their] purpose. The dangers to which… the whole community of Philadelphia is exposed, of having the water above the dam adulterated, calls for immediate measures to prevent so great a misfortune… Health, comfort, decency and the interests of the city demand it.

Starting with the Lemon Hill Estate, the Consolidation Act of 1854 allowed the city of Philadelphia to purchase 9200 acres of land around the Fairmount Water Works—which, in 1855, would evolve into the Fairmount Park system of Philadelphia, one of the largest municipal parks in the world.

HAER / Library of Congress
The Jonval Engine, first operational at the Fairmount Water Works, used a vertical cylinder to allow falling water to turn the turbines no matter the tidal conditions.

Unfortunately, buying the land around the Water Works was not enough to combat the skyrocketing pollution, and would herald the start of Fairmount Water Works’ slow decline in the latter half of the 19th century. The city put a new filtration scheme into operation for the five new pumps the city built during that time: by building sand beds near the pumping stations, the sand would remove contaminants from the water flowing to the pumps. Fairmount Water Works, however, was built right up against the Schuylkill River—there was no space to implement this technique, and with the introduction of newer steam engine designs, the city of Philadelphia closed the facility in 1909.

Over the course of its 94 years of continued operation, the Fairmount Water Works remained a shining symbol of American and Pennsylvania ingenuity. By implementing elegant solutions to the common problem of providing sufficient water to all residents in an urban setting, the water works had been compared to such famous public works such as those of ancient Rome in terms of relative technological accomplishment. Fairmount was the first municipal waterworks in the United States—and for its role as a testbed for several new technologies such as Jonval engines, and for its role in advancing the practical application of technology to the problem of municipal water supply, it is recognized as a National Historic Engineering Landmark by both the American Association of Mechanical Engineers and the American Association of Civil Engineers, as well as a National Historic Landmark by the U.S. Department of the Interior for being “an engineering triumph as well as an architectural treasure.” 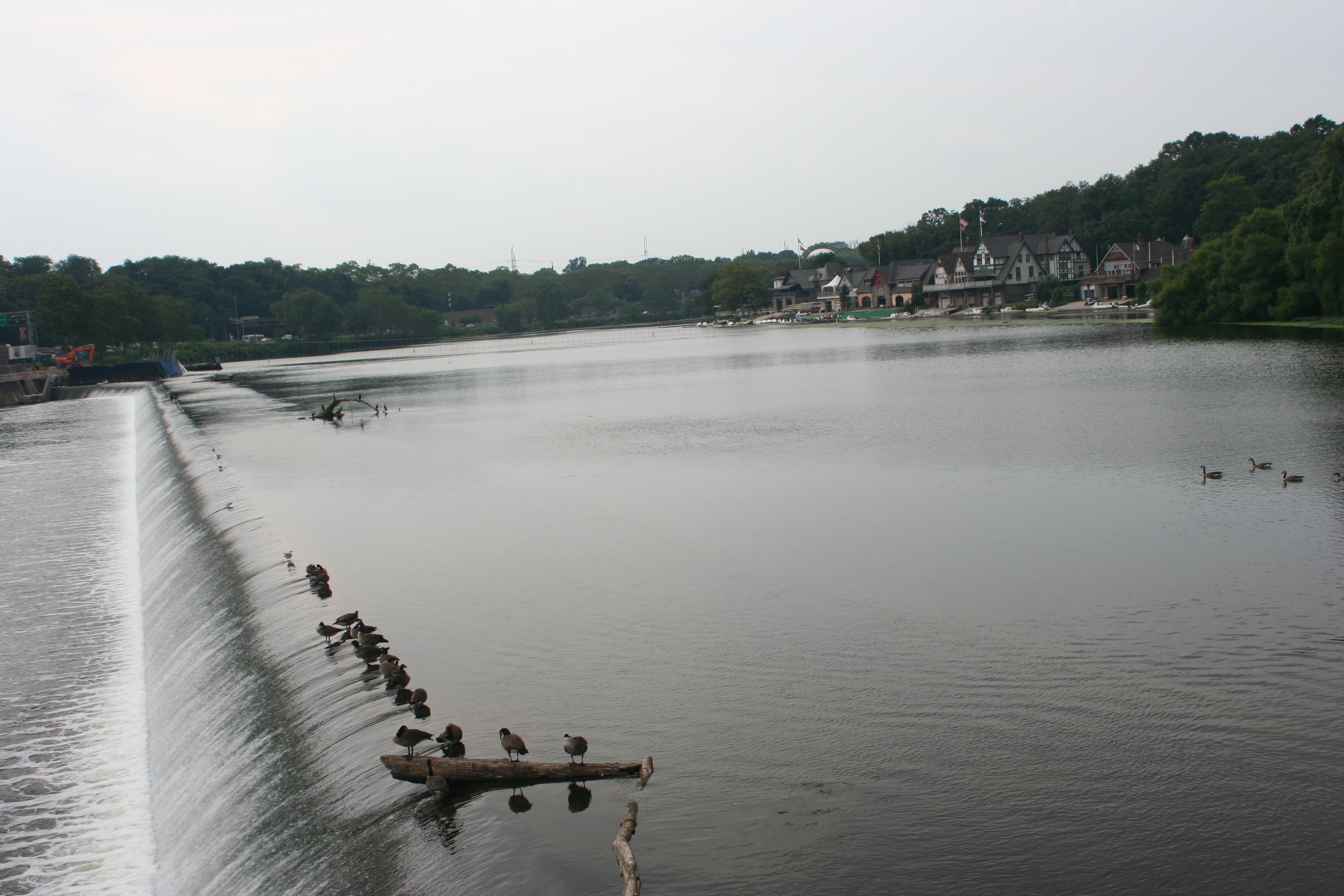 Ben Franske
Birds rest atop the dam at the Fairmount Water Works. People use the grounds of the Water Works as a park.

Information about visiting the Fairmount Water Works Interpretive Center can be found by clicking this link.