By Kathryn DeVan, Fall 2008
Crayola.com
In 1958, Binney & Smith released the 64-count box of crayons, featuring a built-in sharpener. Today, that size is still considered the ‘Cadillac of Coloring’ and envied by students and teachers alike.

Memories of childhood are no longer monochromatic, thanks to the Crayola Company. Rather, they are colored in shades of "cerulean blue," "carnation pink," "bittersweet orange," "Caribbean green," "laser lemon yellow," "burnt sienna brown," "purple mountain's majesty" and "razzle dazzle rose red." Two of the most well-known toys around the world boast the Crayola name: Crayola crayons and Silly Putty. Both of these iconic childhood playthings are the products of one company, originally known as Binney and Smith, headquartered in Easton, Northampton County, Pennsylvania. Although Binney and Smith permanently changed its name to Crayola in 2007, the company has been around since the mid-1860s, creating products to make the world a more colorful place. With more than 1,250 workers, it is one of the largest employers in the Lehigh Valley region.

For the Crayola Company, it has always been all about colors. Joseph Binney, the original founder, started the Peekskill Chemical Works in upstate New York in 1864. He started the company to produce charcoal and lamp black. When Binney moved to New York City in 1880, he is joined by his son Edwin and nephew C. Harold Smith. Five years later, Joseph Binney retired and Edwin and Harold started the Binney & Smith Company, which produced red oxide pigment used in barn paint and carbon black used for car tires. 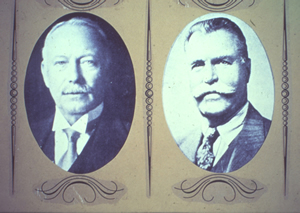 Crayola.com
When Edwin Binney and C. Harold Smith started in 1885, they were only concerned with two colors: red for barns and black for tires.

Fifteen years later, around the turn of the 20th century, Binney & Smith got involved in the production of school supplies and opened a production facility in Easton, Pennsylvania. In 1890, the company began producing slate pencils for school children and in1902, the company debuted dustless school chalk. Not only were school teachers thrilled with this product, but Binney & Smith won a gold medal for their invention at the St. Louis World's Fair. To match the ever-growing production demands, Binney & Smith incorporated the company in September and began to serve as a distributor for several carbon black producers while introducing the carbon black product overseas. 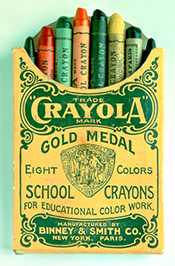 Crayola.com
The first box of Crayola crayons was sold in 1903 and it featured only 8 colors.

As a way to meet the need for safe, quality, affordable wax crayons, Binney & Smith sold the first box of Crayola crayons in 1903. The box included eight crayons in basic colors—red, orange, yellow, green, blue, violet, brown, and black—and cost a nickel. The name Crayola, which has become iconic today, was coined by Edwin's wife, Alice Binney. The word "crayola" comes from the French words "craie" and "ola," meaning, respectively, chalk and oleaginous, or oil-based.

Throughout the 20th century, Binney & Smith experienced growth in numerous ways. In 1952, a production plant was opened in Winfield, Kansas. The company became a publicly-held business in with its stock traded on the American Stock Exchange beginning in May 1963 and Binney & Smith joined the New York Stock Exchange in June 1978. In 1969, a production plant opened in Easton, Pennsylvania and the corporate headquarters moved there in 1976. Binney & Smith went international in 1975 when they opened a manufacturing facility in Pastaje, Mexico. In 1984, Binney & Smith became a wholly-owned subsidiary of Hallmark Cards Inc.

Aside from the corporation, the product line of Binney & Smith has expanded as well. In 1958, only 50 years ago, the 64-color assortment of Crayola crayons box with a built-in sharpener hit stores across the country. Then, to celebrate the 75th anniversary of crayons, Crayola markers were introduced in 1978. A decade later, in 1987, Crayola launched the washable markers, as well as colored pencils. To celebrate the 90th anniversary of Crayola crayons, a 96-crayon box was created, featuring 16 new colors. These colors were named by customers and included: "asparagus," "razzmatazz," "cerise," "robin's egg blue," "denim," "shamrock," "granny smith apple," "tickle me pink," "macaroni and cheese," "timber wolf," "mauvelous," "tropical rain forest," "Pacific blue," "tumbleweed," "purple mountain's majesty" and "wisteria." 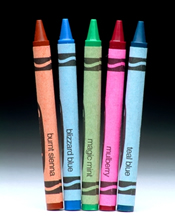 Crayola.com
To make room for new colors, every few years crayons are retired into the Crayola Hall of Fame. In 2003, Crayola retired "mulberry," "teal blue," "blizzard blue," and "magic mint."

Yet as new products were introduced, some products were retired. In 1990, eight Crayola original crayon colors—"maize," "raw umber," "lemon yellow," "blue gray," "orange yellow," "orange red," "green blue" and "violet blue"—were retired into the Crayola Hall of Fame. When Crayola first announced the decision to retire these colors, users were not tickled pink. According to Fern Shen's Washington Post article, a group called RUMPS, the Raw Umber and Maize Preservation Society, was formed to protest the decision. Crayola received a coffin full of crayons and attached to it was a petition signed in crayon. In 2003, marking the 100th anniversary of the iconic toy, Crayola retired four more colors: "mulberry," "teal blue," "blizzard blue," and "magic mint," based on customer votes to keep their favorites in active status. In the press release announcing the retirement of the four colors, as well as the new colors that would replace them, Stacy Gabrielle, the Crayola spokesperson said: "We've only retired crayon colors twice in our 100-year history. It's a heart-wrenching process because we grew up with many of these sentimental favorites, too."

In the past few decades, the crayon box has become something of a revolving container, as many colors were retired and replaced to fit current artistic trends, such as neon and metallic colors. As the 64-box of crayons celebrated its 50th anniversary in 2008, Crayola allowed kids to name the colors based on their color associations. Some of the winning colors are "Giving Tree" (green), "Fun in the Sun" (orange), "Best Friends" (purple), "Happily Ever After" (blue) and "Super Happy" (yellow). However, as color names have become less color-related and more creative, some parents and teachers claim that the original names are making it hard for students to learn their colors, and some children agree. In Phil Kloer's "Crayons play a name game" article, he quotes Gillis Carroll, a third-grader opposed to the new names: "I've already learned my colors, and now it'll be harder to memorize the new ones. I don't think they should change it. There's all these adjustments.

Although there have been over 400 colors with the Crayola label since 1903, there are currently 120 Crayola crayon colors, including 23 shades of red, 20 shades of green, 19 shades of blue, 14 shades of orange, 13 shades of brown, eight shades of yellow, two shades of gray and two shades of blacks, plus one white, one gold and one silver. While the crayons come in more than a hundred varieties, the crayon labels are actually only made in 18 colors.

On average, children in the United States will use more than 730 crayons by the time they turn 10. Not only that, but the average child, ages 2-8, spend at least a half hour coloring a day, which nationwide amounts to 6.3 billion hours coloring annually, nearly 10,000 human lifetimes. To meet this demand, Crayola makes about 12 million crayons every day. If the crayons were put end to end, the colorful line could circle the world 6 times. But the production line does not stop there. In addition to making crayons, Crayola makes about 600 million Crayola colored pencils, 465 million markers, 110 million sticks of chalk, and 1.5 million bottles of paint every year. Even among the crayon category, there are many variations, including the Mom-approve washable crayon and a larger, rounder size crayon to help even the littlest of hands get a firm grip. In a 1990 Smithsonian Magazine article, Beth Py-Lieberman asserted that "nearly everybody alive today probably made their first colorful squiggles with a Binney & Smith Crayola." While this may not be completely accurate, Crayola does dominate the world of color—80% of all crayons sold each year bear the Crayola brand name. 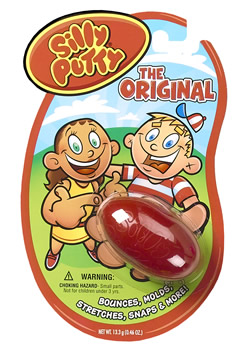 Crayola.com
Silly Putty: this toy "with one moving part" was discovered by accident during World War II. The mixture of silicone makes it stretch like clay and bounce like a ball.

Although many people think that Crayola only makes art products, but the Crayola company is responsible for manufacturing other products, including Silly Putty. However, Crayola did not invent the clay-like modeling substance that can be shaped, stretched or rolled into a ball and bounced. Made from silicone, the stretchy pastime was invented by James Wright, a chemist with General Electric, during World War II after the Japanese invasion of Asia hindered America's rubber supply. However, he just stumbled across the concoction and was never able to use it as a rubber substitute. Silly Putty debuted in stores right before Easter in 1950 (hence the now-ever-present egg containers) and Crayola acquired rights to the product in 1977. Each day, more than 20,000 eggs of Silly Putty are made and each year, more than 9 million Silly Putty eggs are made by Crayola. This adds up to more than 4,500 tons of Silly Putty that has been sold in the past 60 years!

It is a good thing that there is a lot of Silly Putty made because there an innumerable uses of the "toy with one moving part." Many children have made the Sunday comics even funnier by lifting the comic images off of newsprint with Silly Putty and then distorting the cartoons, but that is not it. To celebrate the 50th anniversary of the product in 2000, Binney & Smith launched a contest to award the 50 most creative uses. One entrant said he put an engagement ring in the egg with a Silly Putty questions marked (the lucky receiver did say yes), while one woman made a "swollen gland" with Silly Putty to fake being sick to end a bad date. Another Silly Putty fan used it to make fishing bait when he ran out of worms and lured in a three-pound bass. Other users suggested found practical solutions to age-old problems, such as using Silly Putty to insulate drapes and quickly dust the window blinds. 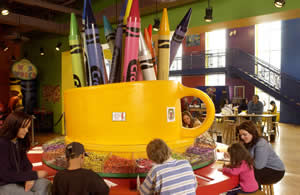 Crayola.com
The Crayola Factory opened in 1996 to help meet the demand for tours of Crayola’s manufacturing facility, as well as to give kids a hands-on opportunity to test new products. In the past decade, more than three million people have visited the facility in Easton.

In addition to having company headquarters in Easton, the Crayola Factory is also located there. This facility opened in July 1996 and has had more than 2.5 million visitors since. At the Crayola Factory, children can learn about how Crayola products are made and test the newest products. Crayola has manufacturing plants in Bethlehem and Easton, Pennsylvania as well as Mexico City, Mexico. Also, there are international offices in seven different countries, including Canada, England, Australia, France, Mexico, Italy, and Spain. Crayola products are sold in more than 80 countries. They are packaged in 12 languages: English, French, Dutch, German, Italian, Spanish, Portuguese, Danish, Finnish, Japanese, Swedish and Norwegian.

Crayola crayons are universally recognized by all and loved by children and adults alike. What started one man and charcoal has become one of the most easily recognizable brands around the world with millions of dollars in sales a year and nearly 1,500 employees worldwide. With each passing generation, pint-size da Vinci wanna-bes head off to school each year with their Crayola crayons tucked neatly into their backpack and even adults can get in touch with their inner child through the use of these fun products. While parents may remember when the crayon box did not have a built-in sharpener and when it only boasted 8 or 24 colors, but children enjoy their 64 perfectly pointed Crayolas.