A grey-skinned man in a tattered tuxedo knocks on the front door. A woman, wearing a long, blood-stained gown, appears in the doorway. Her tangled hair has been styled into a lopsided updo, allowing the bloody gash on her face to be admired. She is impressed by the festering wounds on her date’s neck. With excitement, the couple intertwines their rotting fingers and heads down the street to their destination. Wide smiles appear on their mangled faces on arrival. Just as they were hoping, the party is dead. 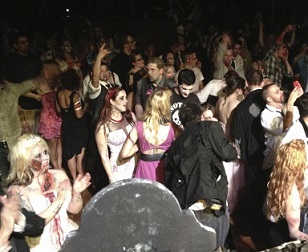 ©Jon DeMinico
People of all ages to let loose at The Trocadero Theatre for Philly's Zombie Prom.

Every year on the last Saturday of September, zombie enthusiasts invade The Trocadero Theatre in Philadelphia for the Zombie Prom, a night of dancing, drinking, and all things dead. “It is one big dance party,” says Ann Dorocki, a veteran of three Zombie Proms. “The event really kicks off the Halloween season and everyone is very excited about getting dressed up and dancing to good music.”

Since 2006, Zombie Prom has been putting a deathly spin on the typical dance party. “As its name implies, the event is horror themed, tongue in cheek, highly theatrical, over the top, but certainly with a wink of the eye,” explains Nick Falcon, a member of The Young Werewolves, a band that headlines the Prom each year. Over-the-top, indeed. One year a man and woman actually exchanged their wedding vows on stage.

Guests can expect to be exposed to an eclectic selection of music throughout the duration of the Prom. According to its official website, Zombie Prom features various DJs playing both “zombie loving tunes” and “unique dark sounds.” Two local bands, The Young Werewolves and Live Not On Evil, are also there to provide “undead” music for the party. The Young Werewolves, who have been classified as “horror-punk-rockabilly,” play a song titled “Zombie Prom,” inspired, of course, by the event itself. ©Jon DeMinico
This young zombie, among others, shows off his dance moves.

Participants are encouraged to dress in typical prom attire with macabre twists. This usually entails ripped tuxedos and dresses covered in blood. To give the skin a corpse-like quality, many attendees paint themselves with a disturbing greenish-grey hue. Although dressing up is not necessarily required, being “human” can make a person feel pretty out of place.

“I have never dressed in a ‘zombie’ outfit. Actually, myself and the one or two people I have been with, may have been the only people at the event that were not dressed up,” says Ann Dorocki. She notes that the most interesting part of not dressing up was the way she was treated by other prom goers. She says, “For the most part, everyone then assumes you are ‘food’…It was hysterical—they pretend to attack you, in a funny, comical way.”

Fortunately, unprepared guests can rest assured that their consumption will not occur. Zombie Prom provides professional makeup artists who can transform anyone from human to corpse…for a reasonable price. While being “alive” at the prom can attract a lot of attention, going all out on a costume will not go unnoticed either. Because no prom would be complete without a King and Queen, the two best-dressed zombies are crowned towards the end of the night. 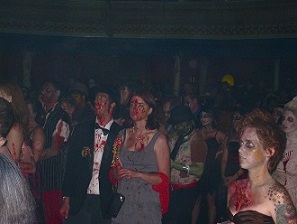 “Jonny Wolf,” drummer of the Young Werewolves explains that the costume aspect of the Prom can get a bit competitive: “Everyone tries to outdo each other’s treatments. Over the years there have been Zombie Hulks, Jesus Christs, and just about everything in between.”

Despite its obvious originality, Zombie Prom is actually the second zombie event to be created in Philadelphia. Prior to the Prom, creator Robert Drake and his colleagues conjured up the Philly Zombie Crawl. Every Easter Sunday, haunting the streets in zombie getups, hundreds of participants slither from one local bar to the next. Ironically, the theme of the Crawl was inspired by the significance of the Christian holiday. In an interview with Street Team, Drake explains the origin of the Crawl. He says, “The genesis, honestly, is a lot of beer...about eight years ago [roughly 2006] we sat around saying ‘you know we should do an Easter party at the bar and we should do something zombie themed.’” 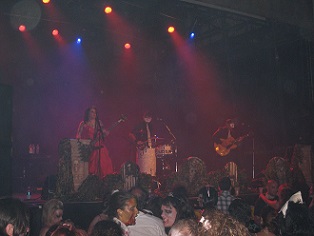 ©Jon DeMinico
The Young Werewolves throw some life into the Zombie Prom party.

After the first Crawl, patrons were simply dying to attend more zombie affairs. The success of the Crawl quickly prompted the foundation of Zombie Prom. “We were getting demands from all these people saying ‘we can’t wait until next Easter, you gotta to do something,’” Drake describes. “So that’s when we said ‘let’s do the Zombie Prom.’” Since then, Drake and his team have been providing the public with three events per year: Philly Zombie Prom in September, Philly Zombie Crawl on Easter, and Philly Zombie Beach Party in June.

While Drake and his collaborators may have been the pioneers of zombie event planning, zombie fanaticism is nothing new to the state of Pennsylvania. In his book Everything You Ever Wanted to Know About Zombies, Matt Mogk explains that the Oxford English Dictionary defines a zombie as “a corpse said to be revived by witchcraft, especially in certain African and Caribbean religions.” The dictionary, however, does not really clarify the modern zombie, which Mogk defines as “a relentlessly aggressive, reanimated corpse driven by a biological infection.” So where exactly did these decomposing monsters come from?

The present-day zombie first appeared in Pittsburgh filmmaker George Romero’s 1968 classic Night of the Living Dead. The gruesome flick set in Pittsburgh opens with a scene filmed at the Evans City Cemetery in nearby Butler County, Pennsylvania. Night of the Living Dead introduced audiences to a terror they had never experienced before. The initial reaction to the zombie is also described in Mogk’s book. He writes,“George A. Romero’s terrifying vision gave audiences such a shock that many were literally afraid to leave their seats after the closing credits ran and the lights went up.” Despite their intense fears after viewing Night of the Living Dead, many of the audience members chose to view the film again and again. 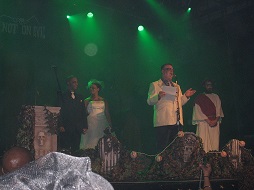 Forty-five years later, people’s interest in zombies is still going strong. In the past several years there has been a spike in the popularity of the undead culture. As Phil Hoad writes for The Guardian, “Zombie films are becoming like burrito chains.” The Walking Dead, one of the most watched television shows of all time, is based on the aftermath of a zombie apocalypse. In addition, there are games, reality television shows, blogs, books, and forums completely dedicated to “surviving the zombie apocalypse.” But what exactly about zombies makes them so appealing to our culture?

There are many theories that the zombie genre is popular when there is public unhappiness and intrigues the public because it plays into people’s innermost fears. In Janice Crompton’s article “Our Obsession with the Undead Lives On and On,” English Professor Sarah Lauro gives some insight on the subject. Having completed her doctoral dissertation on “The Cultural History of the Zombie,” Lauro says, “Whatever we as a culture are afraid of, the zombie is very malleable so it can take on different things, like a virus or the threat of a global pandemic. The zombie allows us to work out what scares us.” So does this mean the popularity of Zombie Prom can be attributed to society’s worst anxieties?

Nick Falcon agrees with Lauro’s theory of the relationship between zombies and our psyches. He states, “We obsess over zombies and created cultures and subcultures surrounding the theme because it allows for our subconscious to absorb bigger, unreal circumstances.”

Taking a different perspective, Drake explains that people love Zombie Prom because it can be an enjoyable escape from their otherwise mundane lives. He says, “I’ve talked to a lot of people that come out to the zombie events... and they have a career that’s very boring, and bland, and professional but they love the opportunity, they love to pour the blood on their face and be undead.” 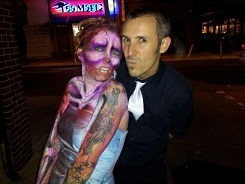 When asked her thoughts on the gloom surrounding the zombie culture, Dorocki had a similar opinion to Drake’s, claiming, “I think this is a very light-hearted event... I am not sure if these people in real life are really planning for doomsday.” Explaining further, Dorocki states, “I go to the event not because I am obsessed in any way with zombies but because it is around Halloween time and it is just another costume party to attend with really good dancing.”

Regardless of the depressing imagery surrounding its culture, Zombie Prom was created with nothing but humorous and joyful intentions. “For me it was comical, the idea of people completely undead dressed up in tuxes and gowns and treating it just like a regular prom,” Drake explains, “I thought, this is going to be theatrical and it’s going to be fun to watch.” Although the zombie culture has been thriving in Pennsylvania for decades, Zombie Prom is a new and interactive way people can get their undead fix while having a great time.“So if you’re lucky enough to still fit into that gown your mother bought you five or ten years ago, break it out, bury it in the backyard, and get ready to party until the break of dawn,” explains Kimberly Zapata in the Examiner. For a night filled with live music, dancing, and a cathartic liberation from the real world, look no further than Zombie Prom. It’s to die for!

The Center would like to thank The Young Werewolves for assisting with the photographs in this article.