Deep in the Heart of PA: Penn's Cave 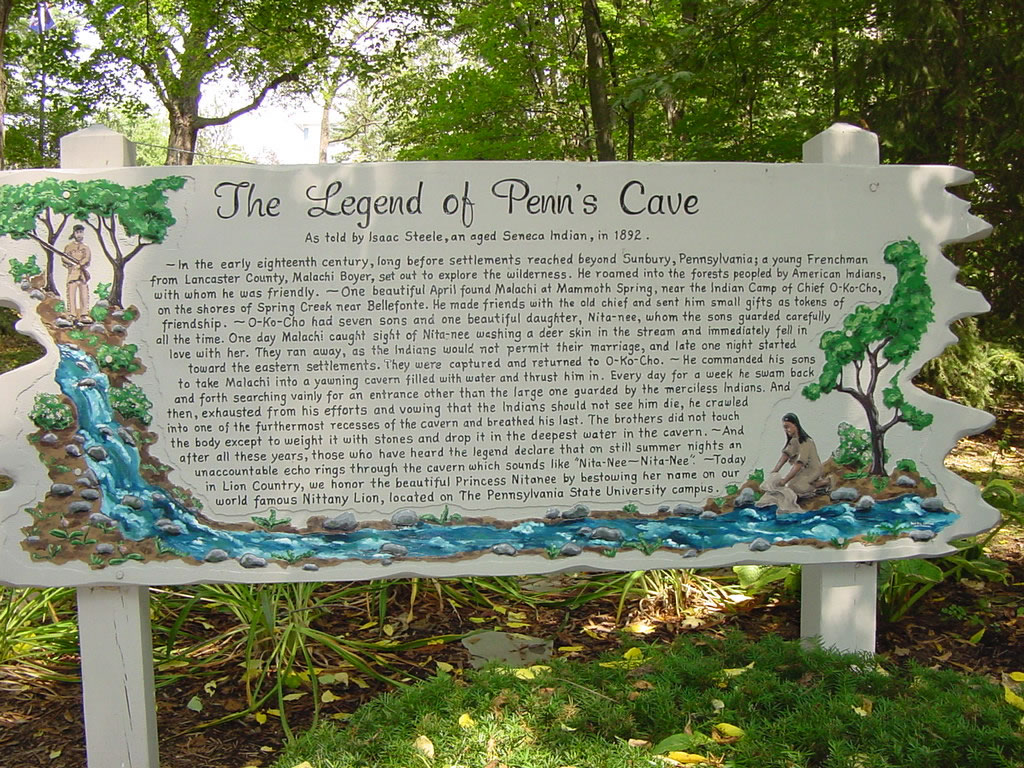 happy via, flickr.com
Folklorist Henry Shoemaker’s tale of the ill-fated love of an Indian Princess and a French mountainman is the most famous origin story of the ubiquitous name “Nittany” in Central Pennsylvania.

Legend has it that amidst the forests of modern-day Centre County, a Frenchman by the name of Malachi Boyer fell in love. One day while exploring the uncivilized, mountainous terrain, he came upon the beautiful daughter of Indian Chief O-Ko-Cho. Boyer was immediately taken with her, and she with him. Although Boyer had established a friendship with Chief O-Ko-Cho, the Chief did not approve of the forbidden love between his daughter and a Frenchman. The two lovers ran away together, hoping to reach Eastern settlements and live happily ever after.

As with many tales of star-crossed lovers, this one doesn't have a happy ending. Malachi and his maiden were caught by Chief O-Ko-Cho's tribesmen. Chief O-Ko-Cho banished Malachi to a water-filled cavern, without any hope of escape. It is said that to this day one can hear his echoes throughout the cavern sounding, "Nita-nee, Nita-nee."

This tale told by Seneca Indian Isaac Steele to folklorist Henry W. Shoemaker helps to explain the meaning of Mount Nittany, the Nittany Valley and the Penn State Nittany Lions. Just miles from Mount Nittany is Penn's Cave, legendarily the same cave to which Malachi was exiled. The cave itself is nestled under about 1,500 acres of rolling fields. It boasts over 600,000 square feet, and its limestone rock is estimated to be millions of years old. It remains a scientific mystery how waters from the streams around Nittany Mountain, nearly five miles away, pass through the valleys into the cavern.

The pottery and artifacts recovered in Penn's Cave clearly show that the original inhabitants of this natural wonder were Native Americans. According to the Penn's Cave Official Teacher's Guidebook, distant relatives of Edgar Allan Poe accumulated tracts of land in battles won against the Native Americans, including Penn's Cave farms. As the land encompassing Penn's Cave was passed down, the dry entrance to the cave was frequented more and more. It wasn't until 1860 that two men, Issac Paxton and Albert Woods, decided to explore further into the cave. They built a raft and successfully traversed the cavern for the first time in documented history. 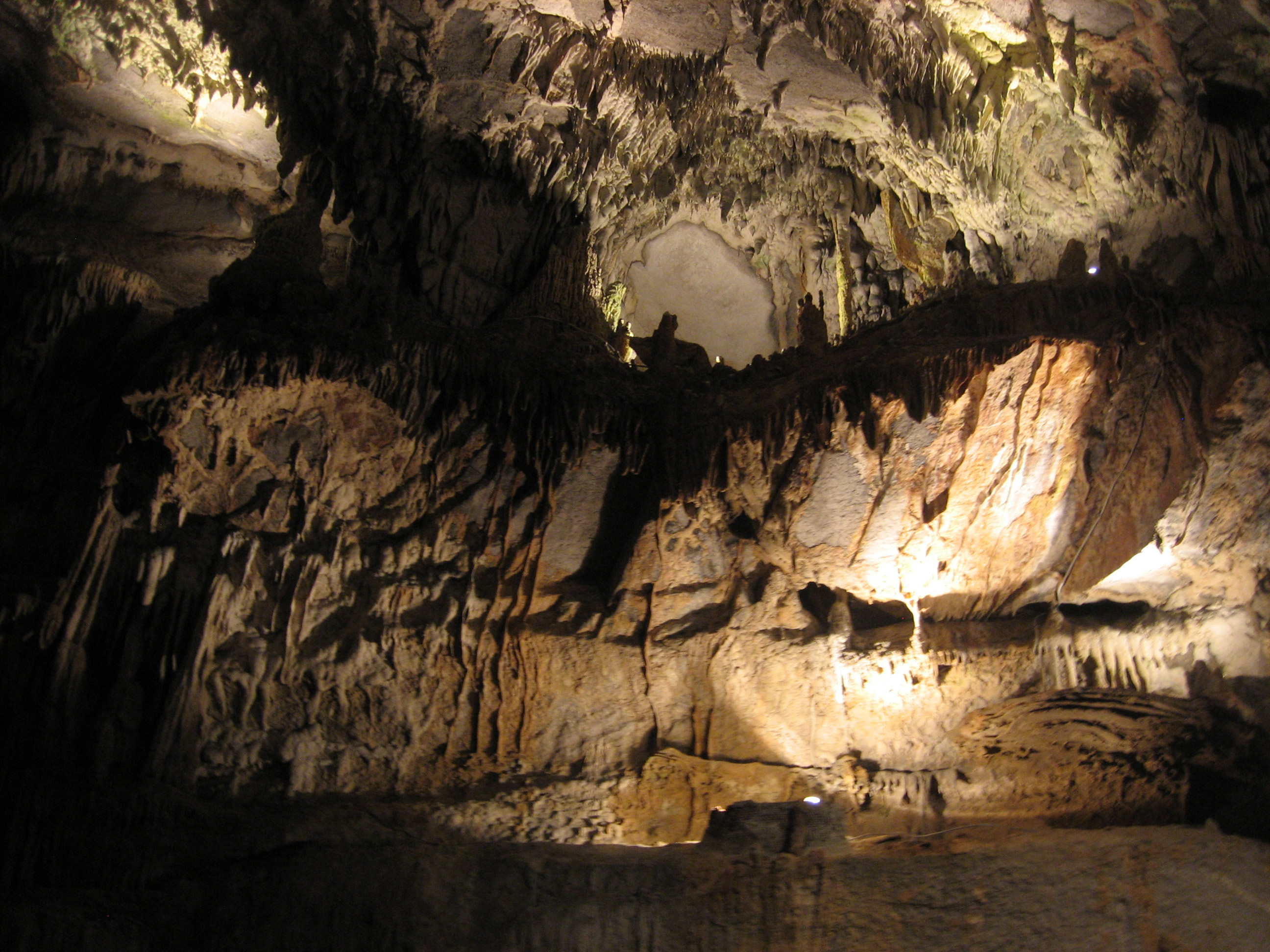 In 1885, the 30-room Penn's Cave Hotel was constructed (today the Penn's Cave House used only for residential purposes) and hosted hundreds of visitors annually. Ownership of Penn's Cave farms changed often over the years due to owners' financial troubles, but notoriety continued to spread. The current owners and operators of the land are descendants of Henry Clay Campbell and Robert Pearly Campbell, who bought the land at a sheriff's sale in 1908 for $12,000. Between 1927 and 1929, Robert designed and engineered the opening of the rear of the cave, which created a tunnel from the main rooms of the cave to Lake Nitanee outside. Today, visitors to Penn's cave can enjoy the same one-mile boat ride that Paxton and Woods first discovered over 100 years ago, complete with a guided tour and circle around Lake Nitanee. In 1976, the United States Department of the Interior named Penn's Cave and Penn's Cave Hotel on the National Register of Historic Places, because of its cultural and historical significance.

Robert Campbell and his family lived in the Penn's Cave Hotel and hosted guests until 1919. Between 1920 and 1929 they used the facilities to serve meals to cavern tourists. The North Wing of the Hotel was removed in 1938, and the remaining 3-story structure is the same one that stands today. A contemporary addition was built in the 1960s. In 1980, it became a private residence, now known as the Penn's Cave House, and contains offices for corporate affairs, meetings, and events. A separate Visitor's Center was built which houses a gift shop and ticket center for visitors to the cavern.

Located between Penn Valley and Brush Valley, Penn's Cave limestone is theorized to have formed from ocean bottom mud compressed into rock over millions of years. This rock is an estimated 400-500 million years old. Penn's Cave follows the linear cave pattern, which in geological terms means its tunnel forms a rather straight passage along the strike of limestone formations. The cavern itself is thought to have formed in two cycles: the dissolving of limestone rock from acidic groundwater, and draining of water through naturally-formed cavities, essentially fractures in the typically impermeable limestone. Centuries of this dissolution caused the fractures to enlarge into cave passages. It is estimated that despite the age of the limestone within the cavern, Penn's Cave is about 30 million years old, which is much older than the average cave age of 10 million years. 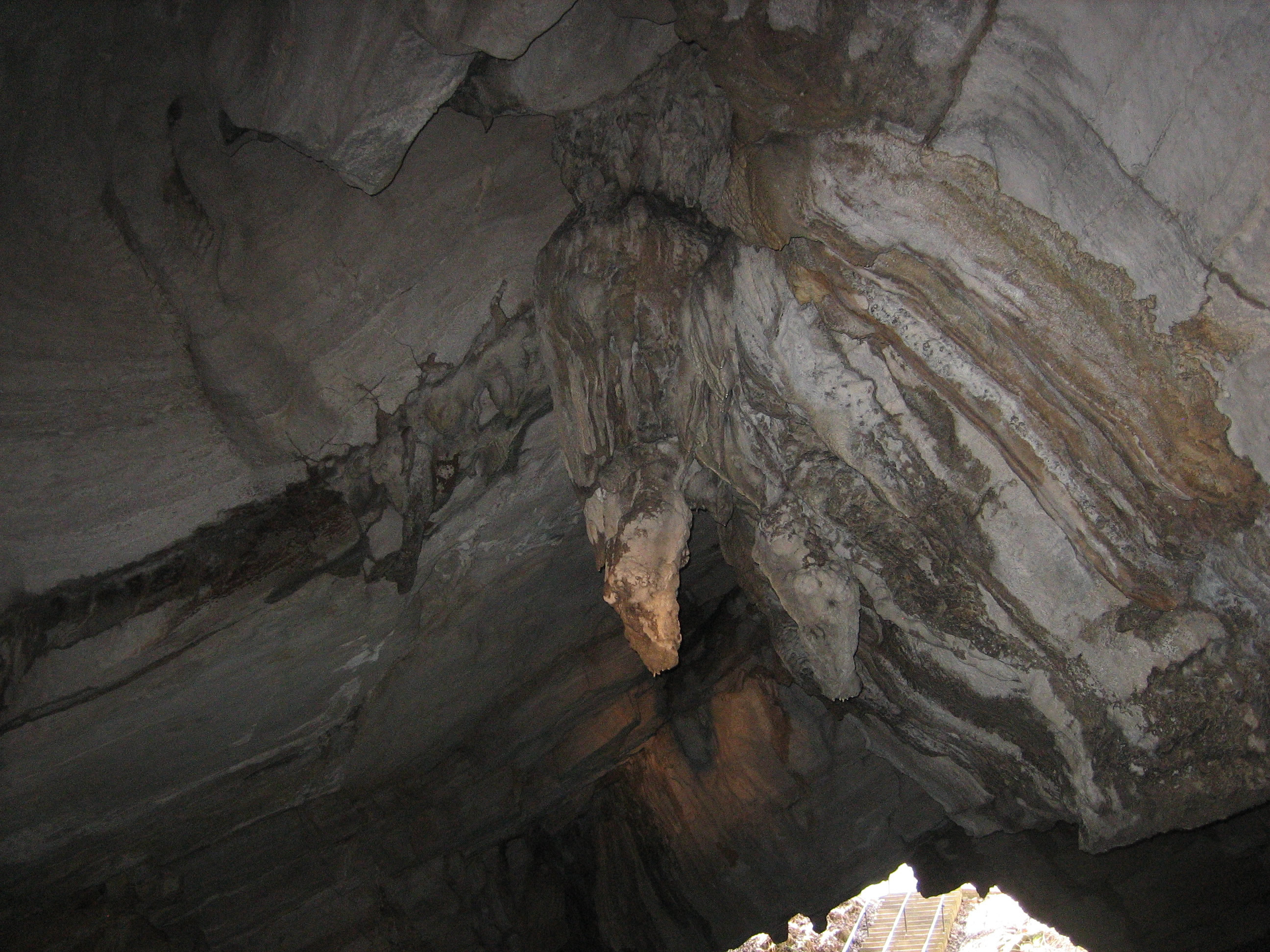 The 75-foot-deep, several-hundred-feet-in-diameter sinkhole entrance welcomes visitors willing to descend into the cavern. This natural entrance permits a dock for the electric boats that take visitors on a half-mile tour through the various rooms of the cavern. The cave is ornamented with the aforementioned limestone and accumulated mineral formations, commonly referred to as stalactites and stalagmites. A mere one cubic inch of this calcite crystal formation takes over a century to take shape. When stalactites (formations from the ceiling that move downward) meet stalagmites (formations that move from the ground upward), they form columns or pillars, which can also be seen throughout Penn's Cave. Tour guides have given names to many of these formations, which include the Pope, Buddha, and the Statue of Liberty (that doubles for the Leaning Tower of Pisa on the return boat ride).

Aside from the Penn's Cave staff and annual visitors, frequenters of the cavern are the only mammals that fly: bats! Common to Penn's Cave, the Little Brown Bat (scientific name: Myotis lucifugus) is Pennsylvania's most common bat species. During fall months, these critters move from their summer roosts and enter the tunnels and caverns. They hibernate in clusters until the weather warms again in late spring. But do not be alarmed; bats are not typically out and about during Penn's Cave's operating hours.

Whether it's the squeaking of bat calls or the lovelorn spirit of Malachi Boyer keening for Princess Nittany, the sounds of central Pennsylvania carom about the walls of Penn's Cave and bring interest and amusement to those who traverse Centre Hall's natural wonder.