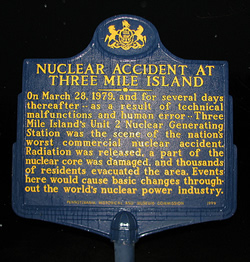 The partial core meltdown of Unit 2 at the Three Mile Island Nuclear Generating Station was the most significant nuclear accident in American history. As a result of this highly publicized event in 1979, the plant at Three Mile Island has become the most recognizable nuclear power plant in the United States. Located on an island in the Susquehanna River near Harrisburg, Pennsylvania, the plant is still in operation today, producing enough electricity to power more than 700,000 homes per year.

The General Public Utilities Corporation began construction of the Unit 1 reactor at Three Mile Island in 1967. Shortly thereafter, GPU decided to expand the plant, and construction of the Unit 2 reactor began in 1970. Unit 2 became operational on March 28, 1978. At the time of construction, the reactors at Three Mile Island were operated by Metropolitan Edison, or Met Ed. Both units were constructed as pressurized water reactors, the most common source of nuclear energy in the world. Today, there are more than 230 pressurized water reactors in operation around the globe. 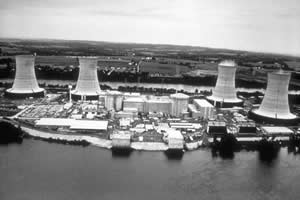 Centers for Disease Control and Prevention
This photograph depicts Three Mile Island as it looked at the time of the accident.

Under normal operation, the pressurized water reactor at Three Mile Island uses three major loops of water to generate electricity and to cool the reactor core. The primary loop keeps water in a liquid state as it passes through the core of the reactor, where the water absorbs excess heat caused by nuclear fission. The heat from the primary loop is then transferred to a secondary water loop using a heat exchanger, which causes the secondary loop water to boil and produce steam. This steam is used to spin a turbine, which then generates electricity. Excess steam is cooled by air in the cooling tower, where it evaporates. The third water loop pumps in fresh water from the Susquehanna River to replace any evaporated water in the system.

When the Unit 2 reactor became operational in March 1978, it experienced a number of start-up difficulties. On March 28, the very first day of its startup, one of the reactor coolant pumps failed. A pressure release valve had opened and stayed open, causing coolant to leak out of the system. During its first year of operation, Unit 2 experienced twenty reactor "trips," immediate shutdowns of the reactor due to any malfunction. Despite these early setbacks in the testing phase of the reactor, the Nuclear Regulatory Commission deemed Unit 2's performance satisfactory for commercial operation. Unit 2 finished its testing phase and began full commercial operation on December 30, 1978.

The nuclear power plant at Three Mile Island encountered relatively little resistance from the public when it began operation. Nuclear power plants were being built all over the country, and there had not been any major accidents at the time. Demonstrations against the plant in Harrisburg, the state capital, and Middleburg, the closest town, were minor. However, the York Daily Record, a local newspaper, ran a series of articles suggesting that the plant posed a danger to the citizens of the surrounding area. On March 26, 1979, Walter Creitz, president of Met Ed, wrote in an op-ed article that the plants were being "operated in a way that places top priority on safety." The nuclear accident at Three Mile Island occurred just two days later.

On March 28, 1979, TMI-2 suffered a cooling system failure when the secondary water loop stopped flowing. The accident occurred at exactly 4:00 a.m., which was the exact one year anniversary of the reactor's startup. The Nuclear Regulatory Commission never officially identified the cause of the problem, but it is believed that water entered a pneumatic air line that controlled the flow of the secondary loop, causing it to shut down. An emergency cooling water system should have started automatically, but it did not. Due to a maintenance error following a test of this backup system, critical valves were left closed, in violation of NRC regulations. The closed valves prevented this emergency cooling system from engaging.

When the secondary loop stopped flowing and the backup system failed to engage, the cooling effect was lost and the primary loop began to overheat. Pressure inside this loop increased by nearly 5%, which immediately caused the reactor core to automatically shut down and halt all nuclear processes. However, the latent heat of the core continued to rise, and it soon reached a temperature high enough to cause a potential meltdown. As pressure inside the primary cooling loop continued to increase, an automatic pressure relief valve opened to release steam. This valve should have closed again automatically when pressure decreased, but it remained stuck open. When the valve failed to close, steam and cooling water poured out of the valve into a holding tank in the basement of the building. This was the same valve that had malfunctioned during initial reactor tests in March of 1978.

Inside the control room, alarm bells rang and warning lights flashed rapidly. Instruments available to the reactor operators showed confusing and contradictory information. There was no signal that the pressure relief valve was stuck open. It was also impossible to measure the level of coolant in the core, since there was no gauge available to the operators that gave a proper reading. One of the operators, Craig Faust, later remarked, "I would have liked to have thrown away the alarm panel. It wasn't giving us any useful information." As the level of water in the main cooling system dropped rapidly, an emergency core cooling system started automatically and began pumping water into the core at a rate of one thousand gallons per minute. When the operators recognized that this was happening, they mistakenly believed the core was going to overflow with water, which would damage the reactor. This fear made the situation worse when the operators decided to shut down the emergency cooling system.

Without a proper cooling system, the nuclear fuel in the core overheated to the point that it began to melt. Although plant personnel and the authorities did not know it at the time, slightly more than half of the core melted during the accident. It was not until 9:00 a.m., more than five hours into the accident, that the cause of the problem was identified and the emergency cooling system was turned back on. This prevented any further melting of the core. In a worst case scenario, the core would have overheated to the point that it could have melted through the floors and walls of the containment building. This would have released massive amounts of deadly radiation into the surrounding environment. This worst case scenario did not occur, however, and adequate temperatures were restored to the Unit 2 core by 8:00 p.m. 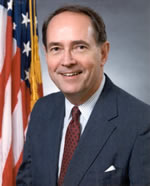 By March 29, the situation appeared to be stable. There was still a high level of radioactive gas inside the plant, but radiation monitors outside the plant detected negligible levels of harmful radiation. On the morning of Friday, March 30, plant operators were concerned about the pressure buildup of radioactive gases inside an auxiliary building of the plant. The workers decided to relieve this pressure by opening a valve to vent these gases into the atmosphere. At the time of release, a helicopter above the plant briefly measured a high level of radiation before these gases harmlessly dissipated into the atmosphere. Unfortunately, this high reading was incorrectly reported to NRC officials as reading from the ground surrounding the plant, which caused immediate alarm. Top NRC officials called Pennsylvania Governor Richard Thornburgh and recommended an evacuation from the area surrounding Three Mile Island. At 12:30 p.m., Governor Thornburgh called a press conference and stated "I am advising those who may be particularly susceptible to the effects of radiation, that is, pregnant women and pre-school aged children, to leave the area within a five-mile radius of the Three Mile Island facility until further notice." 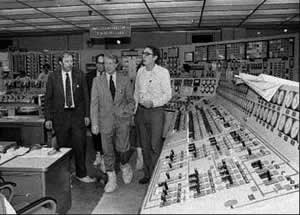 The evacuation order caused more than 140,000 people to flee the area. Most of the evacuees found refuge with friends or family outside the immediate area. Pennsylvania government officials drafted plans to evacuate the capital city of Harrisburg if the situation were to grow worse. By Saturday, March 31, plant officials had assured the governor and the NRC that radiation readings on the ground were safe. President Jimmy Carter visited the plant the next day and took a guided tour of the control room. Carter's visit restored confidence in the safety of the plant and the surrounding area. On April 9, nearly two weeks after the accident, Governor Thornburgh called off the evacuation of pregnant women and young children. By this time, most of the citizens who had fled had already returned to the area. Any potential disaster had been averted, and life in the area returned to normal.

On April 27, 1979, an NRC official announced that there "is no question about the safety of the reactor now. It is safely shut down." At this time, the core of the reactor was cooling significantly. The "safe shutdown" process for Three Mile Island Unit 2 began shortly after the accident and would not be fully complete until 1993. Between 1980 and 1985, the GPU nuclear division decontaminated and evaporated several hundred thousands of gallons of cooling water. After this lengthy process was complete, removal of the nuclear fuel began in 1985. The last container of nuclear waste finally left the facility in 1990, and additional cleanup projects at the site concluded in 1993. 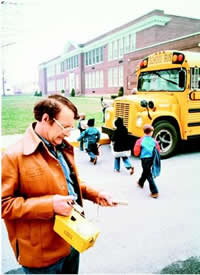 Wally McNamee/Corbis
A defense worker measures radiation at a school near the Three Mile Island plant shortly after the accident in 1979.

After a series of extensive radiological studies, the NRC estimates that the average dose of radiation to the two million people living in the area was one millirem of radiation. To put this number into context, a full set of chest X-rays will expose a person to six millirems of radiation. Nuclear experts and scientists agreed that any radiation effects in the surrounding area would very low or nonexistent. Since the time of the accident, the NRC, the Food and Drug Administration, and several independent agencies have conducted exhaustive studies on the health effects of the accident. No study showed any signs of correlation between the accident and detrimental health of the surrounding population. There were also no signs of radiation damage to farm animals or food supplies in the area. On April 6, 1979, the White House issued a statement saying that there was "absolutely no danger" from food produced in the area surrounding Three Mile Island. 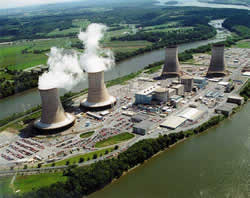 Today the Unit 1 nuclear power facility at Three Mile Island still operates normally. Unit 2 has long since been disassembled, but its two empty cooling towers rise high above the Susquehanna River and can be seen for miles. The plant itself is an unmistakable landmark on the horizon. People continue to live in the surrounding towns, and residency has increased at a normal growth rate since the accident. Although the entire world watched the nuclear accident at Three Mile Island in 1979, life in the area has completely returned to normal. The debate over the safety of nuclear power will continue, however, and Three Mile Island will always serve as a reminder of the potential dangers of nuclear power.