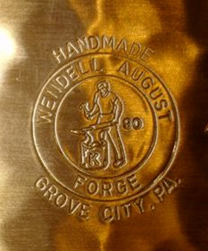 Benjamin Liebling
The Forge's mark has appeared on all of its handmade products for decades.

If you grow up in Grove City, Pennsylvania, Wendell August Forge is part of your life. Chances are you own at least one piece of the hand-wrought metal giftware that has been fabricated using the exact eight-step process of die engraving, hammering, surface flattening and anvilling, edging, coloring, polishing, and forming that has been employed since 1923. From its humble beginnings 87 years ago in Brockway, Pennsylvania, Wendell August Forge has grown from a business of six men producing ornamental ironware to a 21st century metal giftware company employing over 125 people.

Wendell August himself was a Pennsylvania native born in McKean County and raised in Brockway in Jefferson County. In his early working years he had a variety of jobs and according to Bonita Campbell in her book Wendell August Forge, August held interests in the L.M. Groves Mercantile Company, the Fox Ranch, and the Black Diamond Mine of the Toby Coal Mining Company. By his late thirties, August had found steady work as a coal broker.

Seeming to have found a stable career, August decided to build a home in Brockway. Throughout the building process, he made several changes to the original blueprint. The most important of these changes, unbeknownst to him at the time, was the addition of two doors to the home. Once the doors had been installed, August was unable to find latches to match the ones on the other doors in the house, which, in accordance with the colonial architecture of the home, were decorative and made-by-hand from iron. August took one of the latches to a blacksmith at his coalmine in hopes of having duplicates made. In a few short hours and for a fraction of the cost, Ottone Pisoni was able to hand-hammer two latches for August. 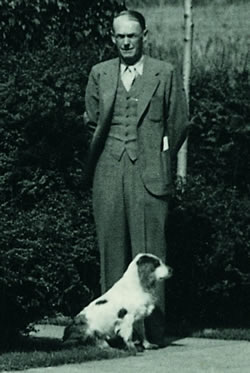 Wendell August Forge
Wendell August, seen here with his dog, got his start in metallic work with latches for doors.

Incredibly satisfied with both the price and quality of the latches, Wendell August asked Ottone “Tony” Pisoni if he would consider coming to work for him making ornamental items such as candlesticks, doorknockers, window and door grilles, and fireplace andirons. Eventually three additional blacksmiths came to work with Pisoni. The first product line included all the preceding items and, of course, the latches which had sparked the business.

August’s side project continued to grow through the 1920s and he and his crew were very successful at marketing their product in Brockway and the surrounding towns. In 1930, even though the Great Depression had driven August and his blacksmiths out of the coal industry, Wendell August Forge was commissioned by the Aluminum Company of America (ALCOA) to create decorative gates for ALCOA’s Aluminum Research Laboratory, according to the Forge’s website. After doing work for ALCOA, August realized aluminum was much easier to work with than iron was and shifted the focus of his forge from iron to aluminum. This was the first big break for a company that so desperately needed one.

According to the PBS broadcast Lasting Impressions: The Wendell August Forge Story, the ALCOA job led to Wendell August Forge seeking more architectural commissions. Many of these commissions were for banks. The workers at the forge would handcraft gates, fences, tables, and teller-window grilles. During this time, August was commissioned by Grove City National Bank in Grove City, Pennsylvania, to do this same type of work. Edwin Fithian, President of the Grove City National Bank, was so impressed by the work August had done for the bank that he offered to help pay for the construction of a newer, bigger forge in Grove City if Wendell August would relocate there. 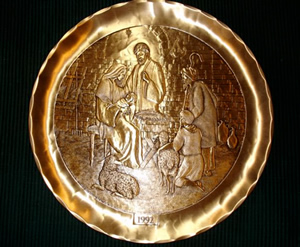 Benjamin Liebling
The nativity scene is brought to life in the bronze work of the metal artists of Wendell August Forge.

At the completion of each job, August would use the leftover scrap metal to create a gift for the CEO, manager, or whomever had commissioned the job. Edgar Kaufmann, a department store mogul from Pittsburgh who built the famous Kentuck Knob house, saw some of the giftware August had made, liked it so well that he commissioned August to create a set of dinner plates, and with this, the metal giftware industry was born.

In the mid-1930s Wendell August Forge began to receive commissions to create unique items to be used for awards, business gifts, or to commemorate special events. One very special memento created by the forge was an ashtray distributed to each passenger of the “Millionaire’s Flight” of the Hindenburg in 1936.

The “Millionaire’s Flight” was a ten-hour flight all over New England, on which 72 of the wealthiest and most influential people of the time were invited. Passengers on the flight included the likes of Nelson Rockefeller (grandson of John D. Rockefeller), Hans Luther (former chancellor of Germany), Admiral William H. Standley (Chief of Naval Operations of the U.S. Navy), Henry Ford, and Walter Chrysler. Wendell August Forge was engaged to create 72 ashtrays, one for each passenger, as a memento from the flight. Attached to each tray is a glass replica of a Hindenburg-class airship that is filled with the fuel that powered the flight. One of these ashtrays was appraised on the television show “Antiques Roadshow” at a value between $8,000 and $10,000.

Throughout the years the forge has been commissioned to create pieces for several other institutions. According to the Pittsburgh Post-Gazette, the forge was commissioned in 1979 to create 12 bronze plates for President Jimmy Carter and the other signers of the SALT II Treaty. Slightly less prestigious, but noteworthy nonetheless, are the one-of-a-kind pieces the forge has produced for commercial clients of all sorts. Wendell August Forge has created items ranging from decorative pieces for Coca-Cola’s catalogs to commemorative plates for the players on the University of Miami’s national championship-winning football team. 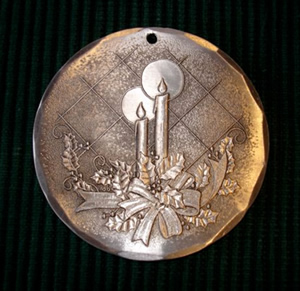 Benjamin Liebling
A bronze ornament from Wendell August Forge's Christmas collection. The edging details can be seen easily in this photo.

Throughout the 1930s and 1940s sales of Wendell August forge products continued to rise. High demand for metal-ware before World War II coupled with the absence of producers during the war years created a very high demand for decorative metal products. Wendell August Forge reopened its doors in 1946 (after serving as a barracks for the previous four years) and was soon back to a full production schedule. Demand was so high following the war that August would often send his customers a quota of the amount they could purchase.

With business booming and finding himself in declining health, Wendell August made plans to retire in the late 1940s and leave the business to his son, Robert. As competition increased and post-war spending tapered off, Wendell August Forge found itself struggling to survive. Determined to not let his business fail, Wendell August abandoned any plans he once had of retirement and remained in Grove City to oversee the forge.

Something had to be done to put Wendell August Forge above the competition. Over the next 30 years, the forge expanded its product line to include jewelry and began to deal in different metals, including bronze and pewter. According to Keith Johnson, Manager of Information Systems for Wendell August Forge, one of the keys to the forge’s ability to stay in business was its lack of dependence on giftware, which was a large problem for many of its competitors. While the giftware aspect of the business was heavily touted as the moneymaking portion, architectural production continued into the late 1970s and allowed the forge to remain in business.

This time period also saw the death of Wendell August. After his passing in 1963, the company was left to his son, Robert, who did not share the same passion for the business as his father. Robert did all he could to see that the business stayed in operation, but showed little concern with the growth of the business, according to a tour and discussion of Wendell August Forge which was broadcast by the Pennsylvania Cable Network. 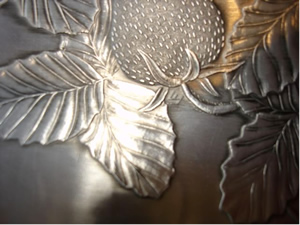 Benjamin Liebling
Each die engraver puts his initials on every die he casts. On this aluminum serving tray, the engraver's mark is just below the strawberry.

For 15 years, Robert August managed the company before deciding that his time at the forge had come to an end. Within a few months word of a for-sale business had reached Bill Knecht, an 18-year marketing and sales associate for IBM. Three months after learning of the opportunity, Knecht acquired the firm.

As a former marketing and sales associate, Knecht quickly began promoting the retail side of the business, and once again sales of the decorative giftware began to grow. At the same time, Knecht began to phase out production of architectural pieces.

The Knecht family has taken many steps to ensure the future of Wendell August Forge. A remodeled showroom allows visitors to the forge to see many more pieces produced there. A new sales catalog has been tied to increased customer orders from all over the country. Even in the recent financial downturn when questions began to arise about whether the company would remain in Grove City or potentially move to a new market that was not as saturated with its products, Will Knecht, son of Bill Knecht and current president, told a local newspaper, the Sharon Herald, that he intended to step up advertising efforts and to remain in Grove City for a long time, rather than close down or move away.

This is a promise to which Bill Knecht has held true. According to Keith Johnson, Wendell August Forge has been extremely active in recruiting advertising specialty distributors from around the country to include the Wendell August Forge product line in offerings to their clients. Business is expected to grow substantially as a result of consulting these high quality distributors. This can already be evidenced by a map hanging in the showroom of the flagship store in Grove City. There are both a United States map and a world map, each with pushpins marking the intended destination of a gift purchased at the forge. Multiple pins have been placed in every state in America, as well as in countries from Brazil to China and from South Africa to Denmark.

Wendell August Forge, the pioneer in the metal giftware business, remains the sole-survivor of a once-thriving industry, having outlasted upwards of two hundred competitors. However, with its revamped marketing efforts and opening of new showrooms, Wendell August Forge hopes not only to continue to survive, but to see continued growth as a business.