Naila Rahman
Linesville, sporting the motto "Where the Ducks Walk on the Fish," proudly boasts The Pymatuning Spillway.

The roar of rushing water fills the air, but for miles and miles visitors can only see still water and the occasional trees on islands in the distance.  Across the deserted highway sits a parking lot full of cars, but the sidewalk seems as empty as if the cars had no owners.  A short minute’s walk down the causeway suddenly turns the view from serene to chaotic.

The sound of rushing water comes from the still water, spilling over a concrete bowl-shaped structure into a sea of carp. Visitors threw pieces of bread down to the carp, and the carp essentially crawling over each other to be the first to make it to the food.  Surprisingly, though, the thousands of carp are not the most interesting thing to see at the spillway.  Instead, it is the ducks, crawling over the carp …that were crawling over other carp… to get to the bread.

Linesville, a small town with population of around 1,100, is affectionately known as the place “Where the Ducks Walk on the Fish,” and is home to The Pymatuning Spillway, which is a small part of the huge Pymatuning Dam.  This dam was originally built in 1934 to control flooding in the Shenango and Beaver Valleys, and with its creation the 17,088-acre Pymatuning Reservoir, the largest lake in the Commonwealth of Pennsylvania (with parts even stretching into Ohio), was formed.  A spillway is the channel through which flood water can flow, in this case, from the protected uppermost part of the Pymatuning Reservoir (called Sanctuary Lake) over the dam into the Middle Basin. 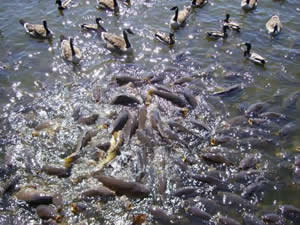 PA Route 6 Tourist Association
Ducks, geese, and carp all want a shot at the bread thrown into the Spillway by tourists, and will even go so far as to crawl over each other to get to the food first.

When the ground was broken for the project in the 1930’s, it was viewed as such an important project that President Herbert Hoover was extended an invitation to speak at the event.  Although Hoover did not attend the ceremony, former Pennsylvania governor, Gifford Pinchot, had the honor of dedicating the Pymatuning Project in front of 6,000 onlookers on August 17, 1934.  As part of his dedication speech, Governor Pinchot declared “All human accomplishments begin with a dream,” a quote that would later find its way into the Pymatuning State Park Recreational Guide.  In 1936, only two years after Pymatuning Dam was built, water flowed over the spillway for the first time.  At that point, the dam was credited with saving the area millions of dollars worth of flood damage that could have resulted if the dam had not been built.

The reservoir, a man-made lake used to store water, is also used as a wildlife sanctuary.  Several species of waterfowl found in 1936, 1937, and 1938, including redheads, gadwalls, ring-necked ducks, shovelers, pintails, and both blue-winged and green-winged teals, had never nested in Pennsylvania before the completion of the dam.  As far as fish are concerned, both Pennsylvania and Ohio stock the lake regularly with warm-water fish, although carp have never been artificially placed in the lake.  The thousands of carp visitors can see in The Spillway are a natural phenomenon.

Although the spillway was built for practical use, it has ended up being much more than just a water-controlling structure.  Pymatuning State Park is the second most visited park in Pennsylvania, trailing only Presque Isle State Park in Erie County.  With visitors logged from every state in the United States, as well as visitors from over 20 different countries, the park has quickly become a huge source of revenue both for Linesville and for Pennsylvania, with much of its draw coming from the Spillway attraction.  In fact, in a local study it was found that on average, tourists feed the fish an average of 2.4 pounds of bread per visitor. 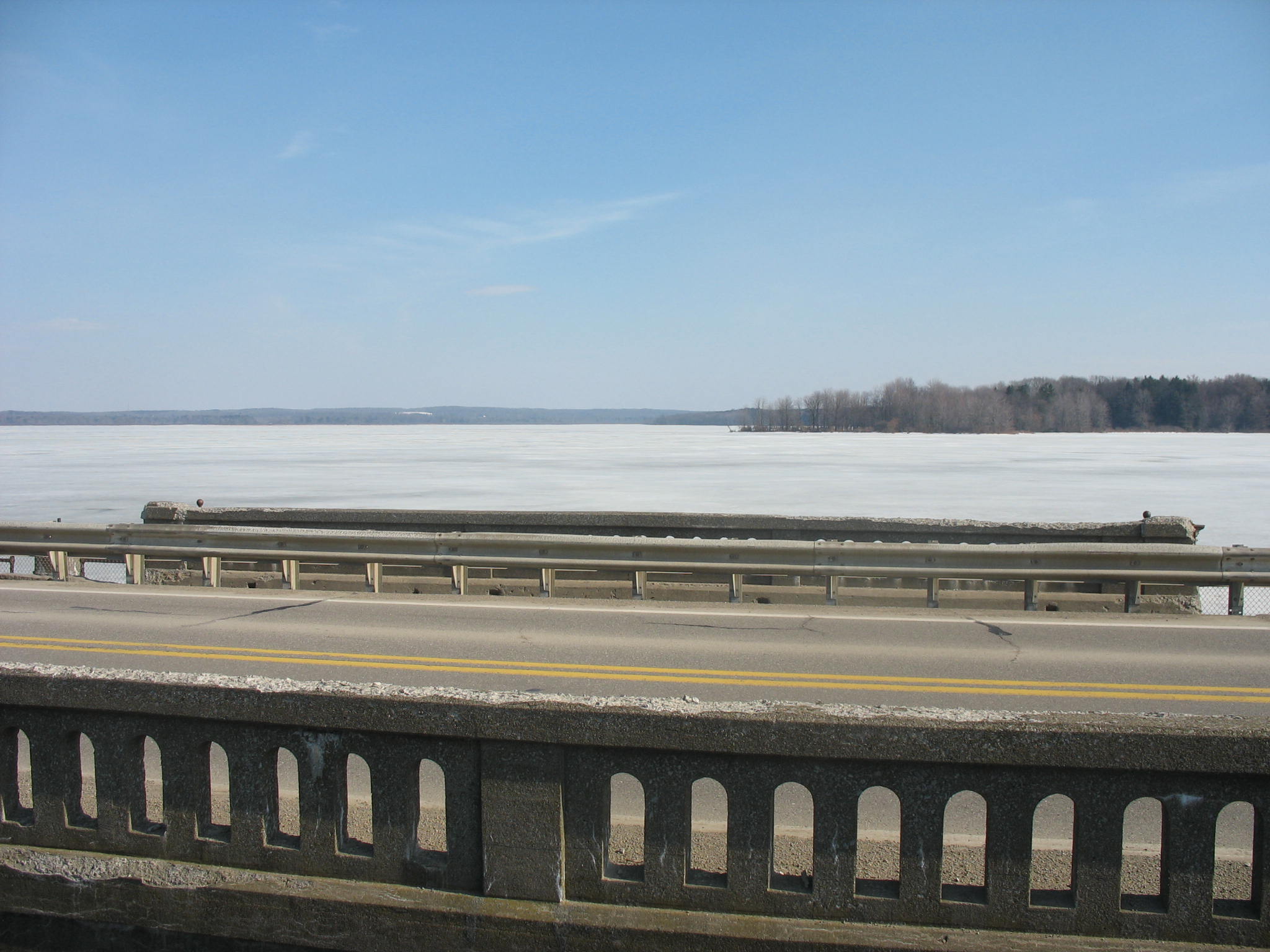 Naila Rahman
The huge Pymatuning Reservoir spans two states and ices over in the wintertime.

According to a field review by Roadside America, park manager Pete Houghton says that people have been coming to the spillway since it opened in the 1930’s. Bob Semian, co-owner of The Spillway Restaurant, stated in the Linesville Journal that “[The Pymatuning Spillway’s] like the Niagara Falls of Linesville…It’s just so unusual, people have to come.”

As the number of visitors to the spillway grew over the years (now topping 500,000 visitors annually), it was clear to officials that some renovation work on the spillway was becoming necessary.  In 2005, eight years after the legislature originally approved for renovations, it finally released the funding to complete a $2.7 million dollar improvement project which would consist of a new parking lot, new concession and restroom buildings, and extensive improvements to allow for handicap access.  PA State Representative John Evans said in 2005, “Last year it became so bad at the spillway, the railing itself started to crumble.”  But even a crumbling railing is better than no railing.

In fact, when the dam was first built, and the spillway had no railing, rumor has it that people had actually fallen into the spillway.  In the Roadside America field review, Houghton said he could only recall a few instances of people falling into the old spillway, but with no casualties.  The story of people taking a plunge into the spillway has, according to Ohio resident Rod Abrams Jr., been passed down through generations in his family.  It even goes so far to suggest that “an infant once fell into the spillway… The carp kept him afloat.”  Whether or not the legend is true, and the carp can be credited with being entertaining and being life savers, proof exists that the carp are also in some ways a “problem fish.” 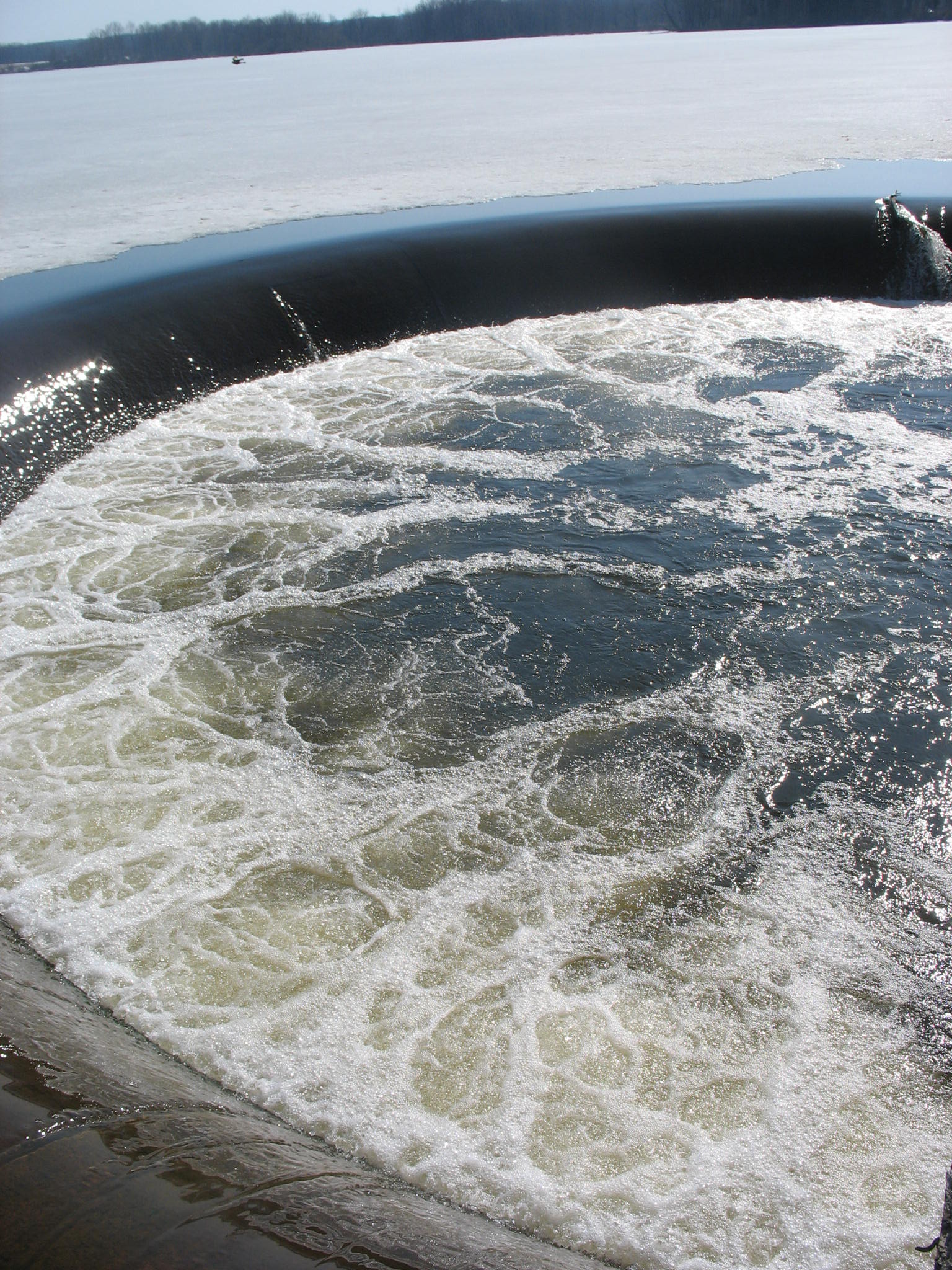 Naila Rahman
The Spillway channels flood water from an upper reservoir to a lower reservoir, forming a bowl for carp to collect in.

The growing number of carp in the reservoir put a damper on populations of other fish that are found in the lake.  The problem of overpopulation got so bad even by 1936, that the Board of Fish Commissioners initiated a project that used trucks to remove carp to places where they were more welcome.  A screen was put up as part of the project to prevent further migration of carp into the refuge reservoir, but it seems the carp still find a way to reproduce at excessive rates.

In 1994, due to the extremely large number of carp in the reservoir, the Bowfishing Association of America started an annual Carp-a-thon, giving prizes to teams that could catch the most carp during a certain time period.  Winning teams reeled in hundreds and hundreds of pounds of carp in competition for prizes ranging from trophies to money.  The carp were then donated to local zoos to use for food or relocated to other parts of the state.  Still, even with these efforts, the carp have proven to be a menace to the other fish in the reservoir.

In the upper reservoir, which is the part of the lake set aside as the game refuge, the bottom-feeding carp began to prevent new aquatic plants from growing, and even uprooted existing plants.  As a result, migratory waterfowl were not able to find enough food.  This, in turn, caused an extreme decline in the number of waterfowl surviving off of the Pymatuning Reservoir environment.

What had begun as a bragging point for the wildlife refuge with the appearance of new waterfowl, ended up becoming a worry for the Pennsylvania Game Commission.  In 1945, a program was launched to plant flora from an airplane along the entire margin of the lake.  The program was a success and in no time, the waterfowl were at home again.

While the carp population was busy deterring waterfowl at the reservoir, the carp were also attracting large numbers of Canadian geese to the State Park’s beaches.  Visitors began to complain about the condition of the beaches and campgrounds due to fecal matter from the geese.  Houghton told the Linesville Journal “I received 94 written complaints and 10 times that many in person… about fecal matter on beaches and campgrounds… We had people say they were never coming back.”  After some research, it was found that the geese were attracted to the tons and tons of bread thrown into The Spillway for the carp each year.

The complaints received by the park led the Department of Conservation and Natural Resources to the idea of limiting what tourists fed the carp to pre-approved pellets that officials believed would not attract as many geese.  Allowing people to feed wildlife is strictly forbidden in other state and federal parks across the nation, and Pennsylvania does not allow visitors to feed the wildlife in any of its other 117 state parks.   Charlotte Kimple, owner of the Driftwood Restaurant in Linesville, told the Linesville Journal, “The fun is the fish jumping up for the bread.  They’re not going to jump up for any darn pellet.”  She goes on to say that Linesville’s economy is so dependent on the spillway that “If they do it, they might as well roll up Linesville and close the doors.” 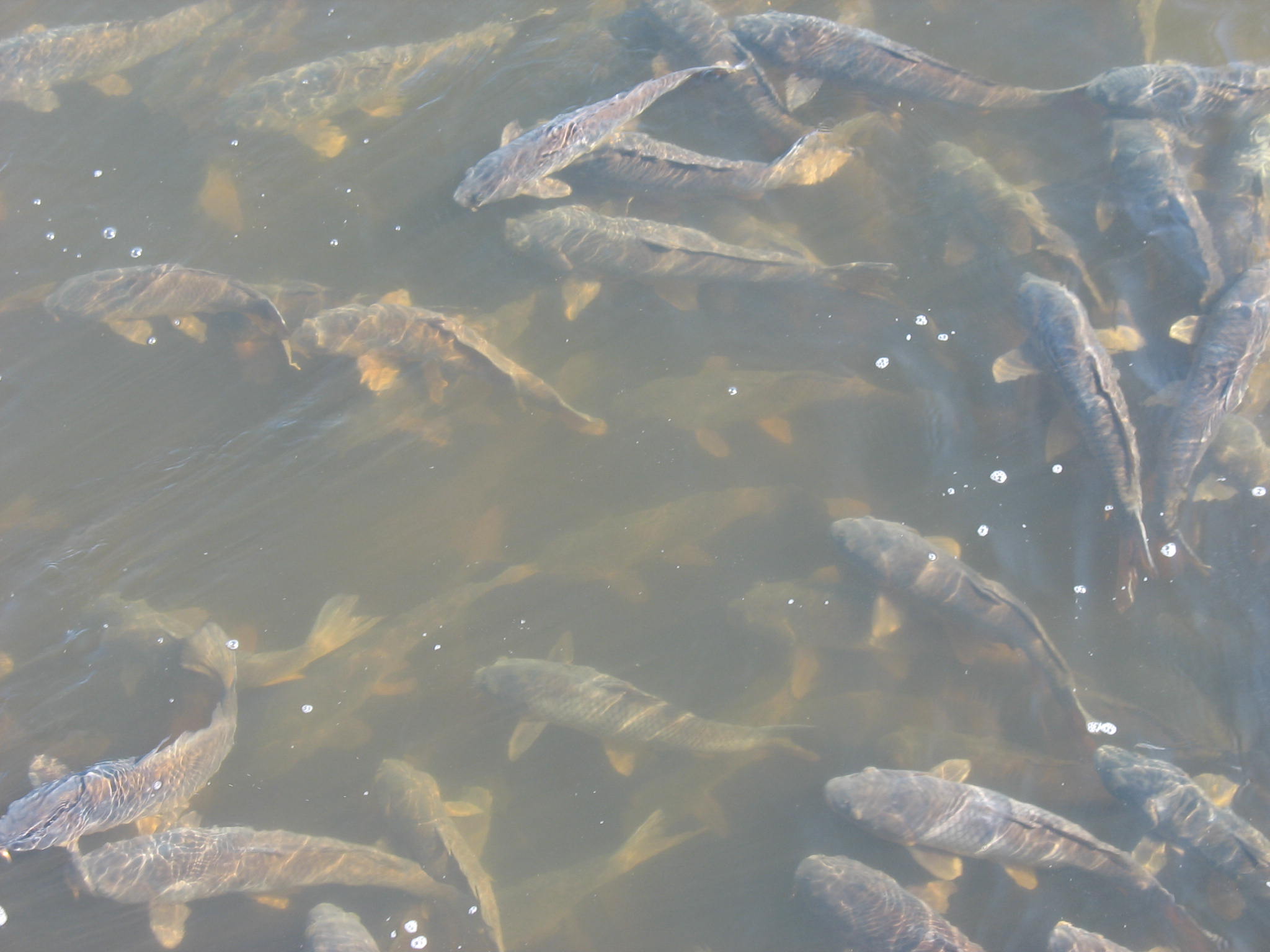 Naila Rahman
A sea of carp can be found at the Spillway year-round, although many migrate into deeper waters during the winter and return to the Spillway in the spring.

Although it is clear economically that allowing tourists to feed bread to the carp is something to fight for, a solid counter-argument exists from an environmental standpoint. A study published in Environmental Management and written by Clarion University biology professor Andrew Turner, found that the excessive amounts of bread thrown into The Spillway were causing an increase in phosphorous levels in the water.  Phosphorus is added as a salt preservative to many types of commercially prepared breads and this phosphorus can be extremely detrimental to the delicate balance that wildlife needs to survive in a natural setting.  High phosphorous levels, according to ecologists, can cause toxic algae blooms, poor water quality, and low oxygen levels in the water.

Still, the idea of banning bread feeding met huge public backlash and eventually the Department of Conservation and Natural Resources was forced to retract the idea.  To this day bread feeding is still allowed at The Spillway.

It is no surprise that a project that started out gaining lots of attention before it was even built still receives a great deal of publicity almost 80 years later.  Although Pymatuning State Park does not advertise the spillway attraction, throughout the years the grotesque, unusual, and yet completely natural abundance of carp at The Pymatuning Spillway has provided entertainment for millions of people.