The Edison Hotel: A Bright and Colorful History 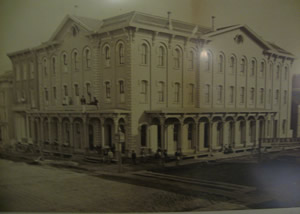 Jason Klose
The City Hotel was built by E.T. Drumheller in 1871. On July 4, 1883, it became the first building in the world to be illuminated using incandescent electric lights.

Some Pennsylvanians and particularly those in the Susquehanna Valley may not be aware of the history of a famous building practically right in their own backyards. It may seem like any ordinary building if its name were hidden, but take a closer look and it may seem familiar. After a little bit of thought for anyone who knows their history, it should not take long to guess who the Edison Hotel in Sunbury was named after. This building in Northumberland County, holds the distinction of being the first in the world to be electrically lighted by the famous inventor Thomas Alva Edison.

Built in 1871 by a local entrepreneur named Edward T. Drumheller, the Edison was first known as the City Hotel. Drumheller's first ventures were as proprietor of the Susquehanna Hotel at Fourth and Penn streets, and the Aldine Hotel, at Arch and Third streets. After having success with those earlier business establishments, Drumheller decided to build the City Hotel. It opened in January 1872 and quickly became known for its fine dining and lodging. 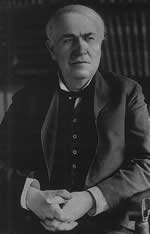 Perry-Castañeda Collection
University of Texas at Austin
Edison’s portrait hangs above the fireplace in the lobby. The hotel was renamed in 1922 when he returned for Sunbury’s 150th anniversary celebration.

According to Scott Heintzelman, president of the Northumberland County Historical Society, the building included one of the first commercial elevators in the country, which took guests to one of the 40 rooms on the second and third floors. The hand-operated elevator is still used quite frequently today. The hotel was also known at the time for its first-class restaurant.

Edison first came to Sunbury in 1882 to build the first three-wire central station incandescent electric lighting plant in the world, which was located at the corner of North Fourth and Vine streets. Before arriving in Sunbury, Edison had solved the basic problem of lighting by electricity on October 21, 1879, when he developed a sealed glass globe with a carbon filament which became incandescent while transmitting an electrical current. Although he illuminated the streets and several buildings of his home town, Menlo Park, New Jersey, the following year, two problems remained to be solved. Edison had been using a two-wire system and the installation costs of the amount of copper wire that was needed were prohibitive. By using certain electrical formulas, which he and others had developed, he discovered that the size of the wires could be reduced to only a quarter of the amount of copper by using a three-wire system. But to do this he had to test this new idea on a practical basis.

Edison chose Sunbury as the site of his electric lighting plant due to several advantages. For one, the town was using gas for illumination and the rate of cost of the gas was relatively high. The system had to be near the source of fuel as well as be on a competitive basis. Second, the town was close to anthracite fields in the Shamokin area, and the abundance of coal there provided a comparatively cheap fuel source needed to operate the generator for Edison's experiment. Another advantage was the readiness of the many wealthy citizens of nearby Williamsport to supply the necessary capital for the enterprise.

The Edison Electric Illuminating Company at Sunbury was incorporated on April 30, 1883. A lot 30 x 75 feet with a small house was secured at a cost of $300, and a small building about twenty-five square feet was erected. The labor and material used and electrical wiring installed cost $90, which at the time was considered "extravagant expenditure." After the three wires were strung between poles along Spring Run down as far as Woodlawn Avenue and then west to Fourth Street, they were then strung to the hotel. A first test was made on July 3, 1883, but this failed due to the improperly lubricated babbit bearings in the dynamo. However, after repairs were made the following night, Edison flipped the switch to a 100-candle power light over the hotel entrance. The current was turned on and the tests were successful. On July 4, 1883, the City Hotel was illuminated, making it the first building in the city, and the world, to be lighted using incandescent carbon-filament light bulbs, very much like those used today. Edison supervised the operations at the Sunbury plant periodically for one year. His longest stay in town after the start of the July 4th operations was about three weeks. 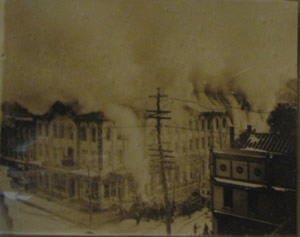 Jason Klose
The City Hotel is shown burning on January 14, 1914. Its front hotel was destroyed, but was later restored with a change to the façade and the addition of a fourth floor.

The Drumheller family owned the hotel into the 20th century, but on January 14, 1914, a fire destroyed a large portion of the building. The cause of the fire was never determined. After the fire, the family restored the building and changed its design and also added a fourth floor. The building had been known as the City Hotel for nearly 50 years, but in July 1922, Edison returned to Sunbury at the occasion of the city's Sesquicentennial and the dedication of a plaque at the entrance to the Edison Hotel.

The upright dynamo that was used in the original Edison plant was in service for many years in Sunbury. It was later exhibited at several world's fairs, including the St. Louis fair in 1904 and the Sesquicentennial in Philadelphia in 1926. After remaining at the Franklin Institute in Philadelphia for several years, the large generator had been housed at a museum in Florida. According to Cindy Inkrote, director of the Northumberland County Historical Society, the generator used by Edison has recently been reclaimed by the city of Sunbury in the hopes of making it the centerpiece of a proposed museum.

The city also recently celebrated the 125th Anniversary of Edison's Sunbury Experiment in July 2008. The event attracted people of all ages, with various entertainment of the time period, including the original dynamos used by Edison to generate power in 1883. Exhibits of correspondence and memorabilia of Edison's experiment were also displayed, as well as antique cars, barbershop singers and food and drinks located around the blocks. Mayor Jesse C. Woodring recognized the significance of Edison's experiment for the city of Sunbury and the world. "He didn't spend much time in Sunbury," Woodring said of Edison, "but the time he did changed the world." 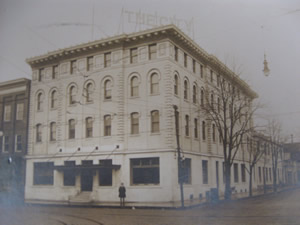 Jason Klose
The City Hotel during the early part of the 20th century.

Inkrote added the event was a chance for residents to get a look at Sunbury's incredible amount of history. "The whole purpose is to get people to look at the city's history," she said. "The area has an incredible amount we don't take advantage of." Inkrote said she chaired the committee and worked closely with the Edison Papers Project at Rutgers University, which holds more than five million Edison-related documents in their collections. Although the group realizes they can't hold the Edison event annually, Inkrote said they hope to continue working with the city on more projects. This is something that the present owner would gladly be open to in an effort to preserve the history of the city and the Edison Hotel.

As if the Edison legacy weren't enough to draw interest to the Edison Hotel, reports have had it that the Edison is haunted. The hotel's present owner, Randi Buehner, talked about a spirit named "Ramona" that roams the building from time to time. Even more interesting and perhaps even startling is an image of a ghost that appears in an old photograph of the hotel from the early twentieth century. In the photo, which hangs on a wall in the lobby, appears a faint image of a child sitting on the porch steps along the side of the building. Buehner said the photo was taken to a photographer to see if the figure was a double image, but it was actually found to be real. "He's actually wearing a different period of clothing, with breeches on," said Buehner. At the time the photograph was taken, men were wearing long pants, not breeches, which were short pants that only came down to the knees and were worn during the seventeenth and eighteenth centuries. "He does have breeches on, so he is our little ghost," Buehner said jokingly. She also noted that they have had people come in and check things out in the hotel and that there is definitely detection of paranormal activity within the building. 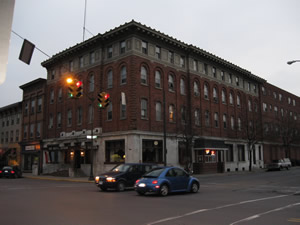 Jason Klose
The Edison Hotel is shown today on the corner of Fourth and Market Streets. It currently has 51 rooms and 15 residential apartments.

As for the normal activity of the Hotel over the years, the Edison has had a succession of owners since the Drumhellers sold the business sometime in the 1920s. Donald Morgan, one of the more recent owners, ran the hotel through the 1980s and early 1990s and sold the building to Buehner in 1994. Buehner, who has worked at the Edison for 30 years, bought the hotel from Morgan after working for half that time as a waitress, desk clerk and eventually assistant manager. The building was recently invested in by Bradley A. Niemiec and Meghan K. Beck of 1337 Holdings, Sunbury. They will manage the hotel's 15 residential apartments, which are rented out on a month-long lease. Though some people still stay on an overnight basis, most of the building's 51 rooms are rented out on a weekly basis by regular tenants, while only eight remain vacant. Buehner will remain as owner and oversee the dining and bar portion of the business. She added she is working on a new menu and hopes to re-open the restaurant for lunch.

Niemiec, who owns 92 residential and commercial units in the Susquehanna Valley, including 65 rental units in Sunbury, is the city's largest residential landlord. He says he likes older, historic properties and intends to gradually make improvements to the hotel to maintain its historic integrity. "This is the heart of Sunbury," Niemiec said. "For Sunbury to do well, this place needs to do well." Mayor Woodring said he would like to see the historic building remain a fixture of Sunbury. "It's a historic place we don't want to see closed," he said. "It's probably the most important building downtown."