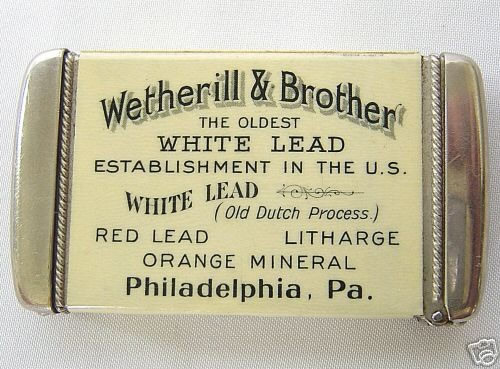 Courtesy of the International Match Safe Association,
PO Box 227, Riverdale, NJ 07457
The Wetherill white lead concern was the oldest in the world, as advertised on this vintage match safe.

If leadership could be synthesized in a laboratory, the reactants would be extensive and diverse. Stephen Covey’s 1990 book, 7 Habits of Highly Effective People formulates traits to guide people on their life’s path. Some of Covey’s reactants include being proactive, purpose-drive, goal-oriented, and open-minded. In the nineteenth century, however, no self-help books existed to produce such a synthesis, yet some individuals simply had the ‘right stuff.’ Industrialists like John D. Rockefeller, Andrew Carnegie, and J.P. Morgan all had it, fusing their innate intelligence, ambition, and relentless perseverance to form strong leadership. Could Samuel Wetherill, the man who pioneered the American zinc industry in the 1850s and possessed vibrant intelligence and seemingly all the right stuff, do the same?

The influence of a family guides the most important aspects of a person’s development. Therefore, when analyzing the nature of Samuel Wetherill, one must first look to the clues left by his family’s heritage. Uncovering these clues reveals that the Wetherill family helped to shape Pennsylvania’s scientific and industrial roots, but more importantly, influenced Samuel Wetherill’s role in spurring an industry with far-reaching effects. 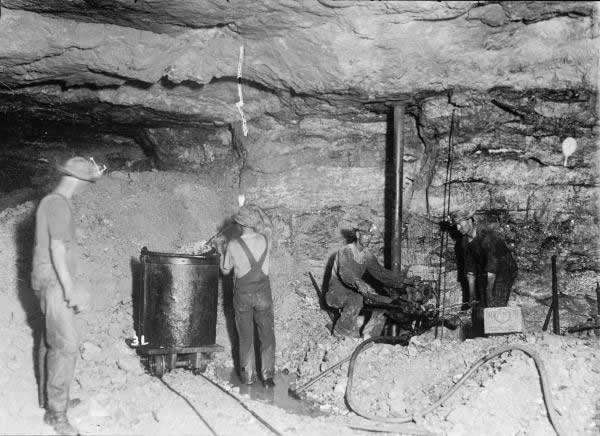 Library of Congress
Mining zinc was always a dangerous proposition.

In 1779, America was in the throes of the Revolution and much of her citizenry had reached a fervor of patriotism. Inspired by the push for independence, industrialist Samuel Wetherill I (Samuel I, 1736-1816, our Samuel Wetherill’s grandfather) was excommunicated from his Quaker faith for his non-pacifist stance and willingness to support the war. Exhibiting strong leadership, he formed the Free Quakers Society so that Quakers could practice their faith while advocating America’s independence. When America increasingly sought commercial independence after the war, Wetherill expanded his active mind towards chemistry by experimenting with the production of white lead, a main pigment in paint. Anne Funderberg writes in the 2002 Invention and Technology magazine that his method involved forming a thin sheet of lead and then pulverizing it into a dry sugar-like powder. Combing the powder with linseed oil produced a paste, which provided paint with its color and opacity. By his death in 1816, a new factory had been built for the production of white lead, and Samuel Wetherill’s highly successful drug and chemical store was bequeathed to the next generation of Wetherills.

One of the sons assumed control of the family business, John Price Wetherill (1794-1853). John Wetherill’s principal role entailed managing the lead manufacturing processes and laboratory. With a keen interest in science and a brilliant mind, he became a superior chemist and actively pursued many leadership positions in the scientific community. Sharing character traits with his father, John P. Wetherill featured remarkable energy, a strong will, and an indomitable resolution; all qualities that strongly influence his public image as a member of Philadelphia’s Select Council. Though his duties in Philadelphia were far-reaching, he always maintained his ties to the family business now known as Wetherill and Brothers. America’s rapid industrialization expansion substantially increased the store’s sales causing the Wetherill’s to struggle to keep up with the demand for white lead. Capitalizing on this opportunity, John P. Wetherill’s son Samuel Wetherill (1821-1890) pursued his own business venture by experimenting with zinc oxide as a cheaper and less toxic alternative to white lead. 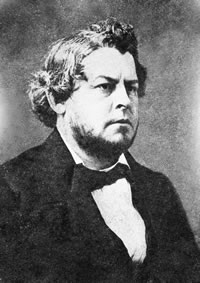 Although little is known of Samuel Wetherill from his personal accounts, tracing his family lineage to this point and using secondary accounts will show the nature of this obscure, but important, American inventor. Educated at the University of Pennsylvania, Wetherill followed in his father’s footsteps by engaging in science and becoming a skilled chemist. While working for the New Jersey Zinc Company in 1852, Wetherill displayed his extensive knowledge and imaginative mind by inventing a novel process for extracting zinc oxide from ores.

In this process, zinc ores are first pulverized and mixed with anthracite coal. Wetherill’s furnace then heats the mixture to liberate the zinc metal from the ore and releases it as a vapor where it unites with oxygen in the air to form zinc oxide. Before Wetherill’s process became mainstream, the French process was widely used to produce zinc oxide. Invented in 1844 by LeClaire, this competing process generates zinc oxide from vaporized metallic zinc as opposed to the ore. Stemming from pure metal, the French process yielded a better quality product; however, Wetherill’s method fabricated zinc oxide directly from the ore so it was more expedient. As demand for zinc oxide exponentially increased due to its variety of uses, American industries required Wetherill’s faster process.

Ernest V. Gent’s 1940 essay The Zinc Industry: A Mine to Market Outline highlights that acting as a protective coating for iron and steel, zinc oxide is superior to all other metals. Zinc oxide retards corrosion in two ways: by simple coverage with a sheath of rust-resisting material and by “sacrificial” corrosion. Like brave pawns on a chess board, zinc oxide acts as the first line of defense, sacrificing itself when attacked by corrosive elements due to its electrochemical properties. In addition to its role in protecting metals, zinc oxide serves as an excellent alternative to lead in paint pigmentation. It imparts such important properties as self-cleansing, supreme whiteness, excellent durability, and resistance to damaging ultra-violet rays from the sun.

In the mid nineteenth century, Wetherill’s zinc oxide process was in its infancy. Instead of continuing to work for the New Jersey Zinc Company to hone his process, Wetherill attempted to sell his patented furnace to the company even though he used their supplies and laboratory to develop his technique of oxidation. The company adamantly refused, resulting in Wetherill’s resignation and pursuit of his own zinc mining endeavors. 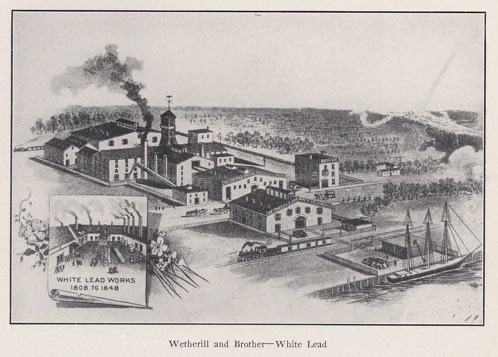 Manufacturing in Philadelphia, John James McFarland, 1912
The Wetherill process made for a great business success, though personal qualities beset Wetherill himself.

Aided by his new patented process to produce zinc oxide, Wetherill chartered the Pennsylvania Lehigh and Zinc Company (1852) with his partner Charles T. Gilbert to exploit the mining of the Saucon Valley Ore. The company operated in a joint fashion: business executives supplied the money, management, and marketing aspects, while Wetherill and Gilbert supplied the skilled mining and manufacturing expertise. In 1854, Wetherill and Gilbert were manufacturing zinc at a much higher rate than what their contract required. While Gilbert and Wetherill reaped the benefits of their success and contemplated expanding their control, the management side of the company thought of shifting control away from the partnership. Joseph Wharton, a young Philadelphia merchant with experience in manufacturing white lead who possessed a disciplined nature, was hired to oversee the work of Wetherill and Gilbert. His orderly character, driving ambition, and business-like personality mimicked previous Wetherill generations, but contrasted strongly with Samuel Wetherill. The clash of personalities would prove explosive.

Seeking attention and respect, Wetherill ingratiated himself with local Bethlehem businesses by buying superfluous supplies and relaxing control over his workers. Furthermore, Wetherill indulged his love of horses by building a racetrack on company grounds and meeting workers daily for horse racing. During such events he contrasted with the rigid principles of the Quaker faith by tolerating gambling among his workers. These business and social improprieties indicate that, although Wetherill inherited his family’s inventive mind, he lacked the leadership skills and purpose-driven mentality of his forbearers. 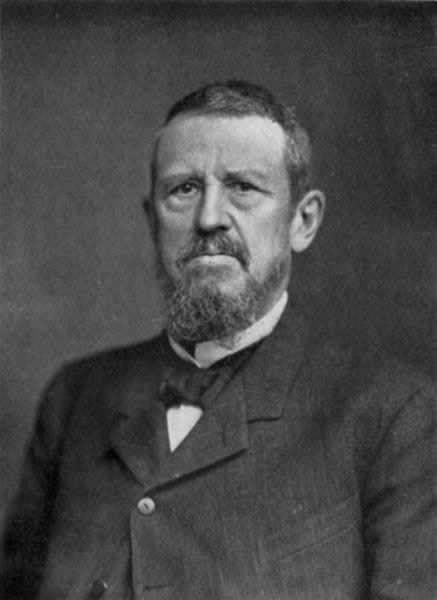 Wikimedia
Joseph Wharton came into conflict with Wetherill about the latter's business methods.

Wharton had no patience for Wetherill’s self-indulgent personality, and the two soon began to clash over the quality of zinc Wetherill produced. W. Ross Yates’ article Samuel Wetherill, Joseph Warton, and the Founding of the American Zinc Industry explains that Wharton believed the reputation of the company would depend on its reliability in supplying oxide of a high and uniform quality on demand. Wetherill disagreed and continued to produce sixteen tons of zinc oxide per day, while the contract only required four tons. In response, Wharton incessantly urged the principle ‘first quality’ by limiting the amount of ore sent to Wetherill. What is interesting about Samuel Wetherill’s lack of emphasis on quality is that previous Wetherill generations placed quality at the forefront of their production of white lead. As Yates put it, “While other paint manufactures were accused of adulterating their products, the Wetherill white lead business had a policy that offered anyone $1,000 if they could prove their white lead was adulterated. This guarantee stood for many years as their business expanded.”

Why does Samuel Wetherill deviate from this family tradition of quality emphasis in zinc manufacturing? Perhaps Wetherill’s behavior was a reaction towards Wharton’s heavy-handed control. This notion became more apparent when Wharton urged repairs and renovations to be made to the manufacturing facilities in an effort to improve quality. During this time, Wetherill was prospecting for an independent supply of ore in the Saucon Valley and used the company plant to experiment with making spelter (pure metallic zinc) so he could go into business for himself. Yates reveals that this devious exploitation of company material infuriated Wharton, who wrote, “for a period of several months you have been appropriating this company’s premises, steam power, and zinc ore in experimenting for your own private purposes, without so much as asking consent.” This dishonest, unscrupulous act severed Wetherill’s ties to the company permanently. 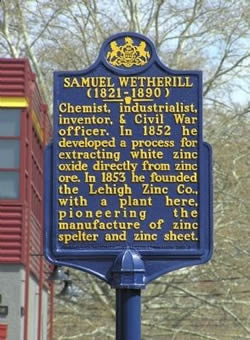 Paul Crumlish, Historical Markers Database
Wetherill's contribution has not been forgotten by the State.

Alone but undeterred, Wetherill still had ambitions in the zinc industry and in 1856 chartered the Wetherill Zinc Company around the Saucon Valley Ore he still possessed. Hoping to replicate his success with zinc oxide, Wetherill aimed to invent a novel process for producing zinc spelter so that he could make money off the patent rights. In 1859, Wetherill successfully developed a spelter furnace, but although it produced quality metallic zinc, the process was not commercially viable and later abandoned.

With the outbreak of the Civil War, zinc manufacturing using Wetherill’s methods proved invaluable. Rifle cartridges, weapon parts, belt buckles, and buttons all incorporated zinc as a protective coating to prevent corrosion and rusting of the base metal. The Pennsylvania and Lehigh Zinc company where Wetherill once worked continued to thrive, and in 1881 a group of investors, including two of Wetherill’s sons, bought the company.

Although the sons extended their father’s work in the zinc industry, and zinc oxide continues to find more uses in the rubber, plastic, and manufacturing industries, Samuel Wetherill’s legacy unfortunately remains a mere shadow of what could have been. His creative and inventive mind allowed him to discover an ingenious process for producing an extremely valuable commodity. If only his extraordinary abilities in the laboratory could have been replicated in leadership, vigor, and ambition, he may have seized the American zinc industry. Instead, like so many inventors before him, his name has largely vanished into the catacombs of history waiting to be excavated.

The Center would like to thank George Sparacio of the International Match Safe Association and Bill Pfingsten of Historical Markers Database for their help illustrating this article.