Fall of the Eighth Wonder: The Kinzua Bridge

Unlike most bridges, parts of the Kinzua Bridge in northern Pennsylvania’s McKean County are on the ground. Originally built in 1882, the bridge’s main purpose was to haul coal northward as a part of the Erie Railroad. Forty workers took a mere 94 days to build the 2,053 foot long bridge. The bridge was built to obviate the construction of an additional eight miles of track. Some people at the time thought its columns, constructed of tubular wrought-iron, were actually wood, because the iron columns looked similar to timbers. In addition to transporting coal, the bridge also moved logs and hemlock bark, used at the time in chemical extraction.

Niagara
After the tornado, the Kinzua Bridge gives new meaning to the phrase "Bridge to Nowhere."

The introduction of larger and heavier locomotives made it necessary to strengthen the bridge. On May 24, 1900, reconstruction began. The bridge was rebuilt using steel, and reopened for use on September 25, 1900. After decades of use, the bridge would be uncrossed until from 1959 until 1987, when the Knox and Kane Railroad began running excursion trains for tourists. In 2003, the bridge was struck by a tornado. A large portion of it collapsed, rendering the bridge impassible.

From the day the bridge opened, in 1882, it was hailed as “the eighth wonder of the world.” During the bridge’s reconstruction in 1900 many changes and adaptations were made. One improvement was the implementation of building techniques such as sliding plates and free moving spans, which reduce the stress of braking trains upon the bridge. Wind was also taken into account, as engineers placed the fixed ends of the lower legs in the north side, the direction in which the wind typically comes from at that location. As the American Society of Civil Engineers (ASCE) noted, “The maximum stress in the towers from the supposed combination of loading does not exceed 14,000 lbs. per square inch, while the elastic limit of the steel used is between 33,000 and 35,000 lbs.” The bridge’s reconstruction took approximately 120 men about four months to complete. 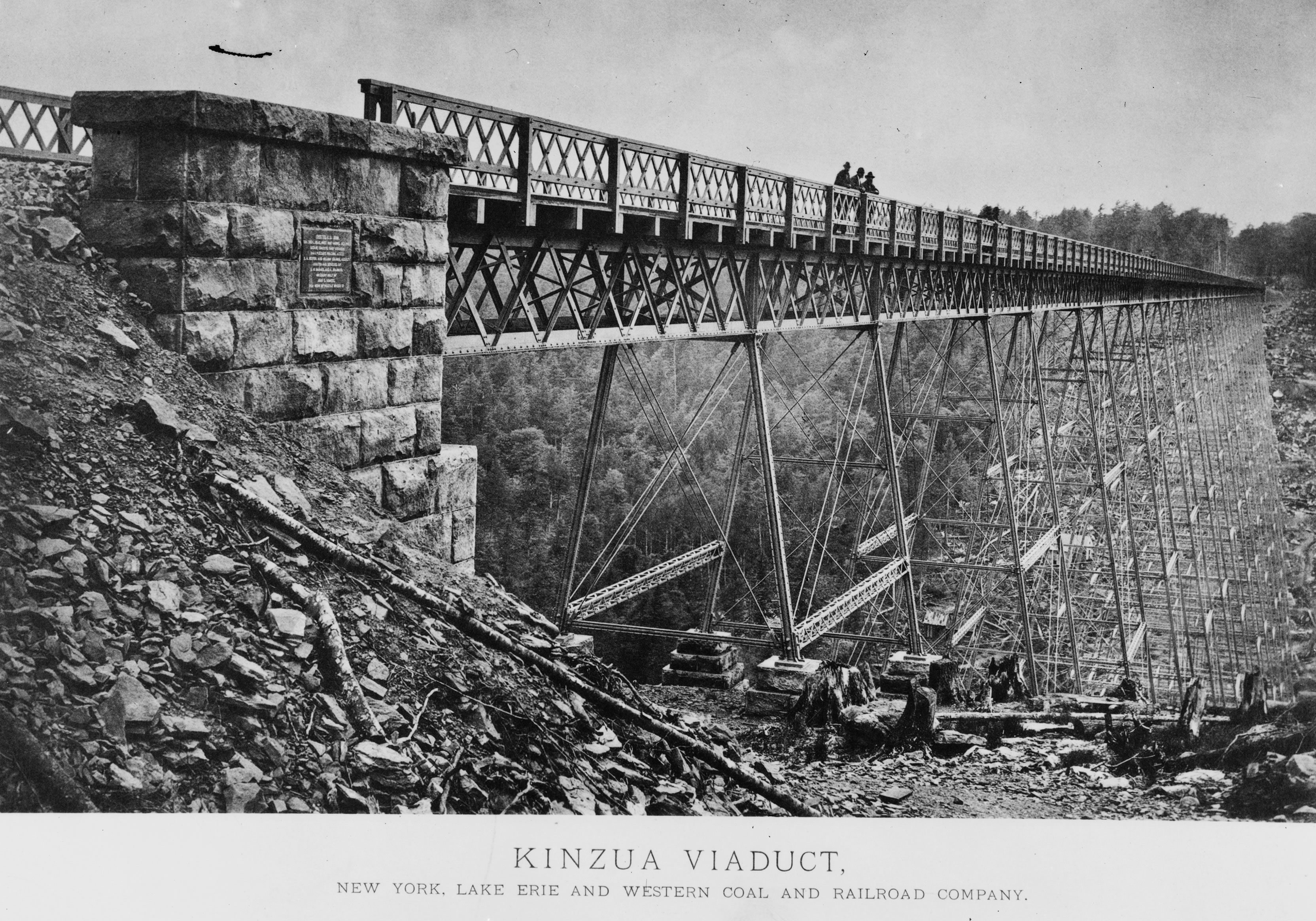 Album of the Designs of the Phoenix Bridge Company, 1885. Library of Congress
The Kinzua Bridge is seen here in its original form before the reconstruction.

The ASCE identifies two significant changes that distinguish the Kinzua Bridge, or viaduct, from other related structures. First, the tops of the two battered post of each bent are brought closer together than with most viaducts, forming a near isosceles triangle as opposed to a quadrilateral one. Second, all transverse diagonal bracing was omitted on the reconstructed bridge. There has been much research done and calculations as to whether or not these were beneficial features to include. Many engineers disagree as to what approach should have been taken. Either way, the overall construction was still looked highly upon, and was added to the National Register of Historic Civil Engineering Landmarks in 1977.

In 1970, the area around the Kinzua Bridge opened as a state park. The excursion trains enabled brave passengers to traverse the viaduct long after it stopped being used for its original purpose of hauling material. In a May 1998 New York Times article entitled “Steaming Through Pennsylvania,” Dan Behrman describes what one of these train rides was like, saying, “When No. 38 eases over Kinzua viaduct (after stopping to let squeamish passengers disembark), the sensation is more akin to ballooning than railroading.” This sensation is largely produced because the bridge, 301 feet above the ground, had no high guardrails, a feature that distinguishes Kinzua from most highway bridges, according to Behrman. In 2000, Akron Beacon Journal columnist Bob Downing describes his experience at Kinzua Bridge State Park, saying “Visitors can walk across the old trestle-although it can be a vertigo-producing experience being 200 feet above the treetops. People enjoy the area for the train rides, viewing the beautiful scenery, fishing, camping, and other outdoor activities.” 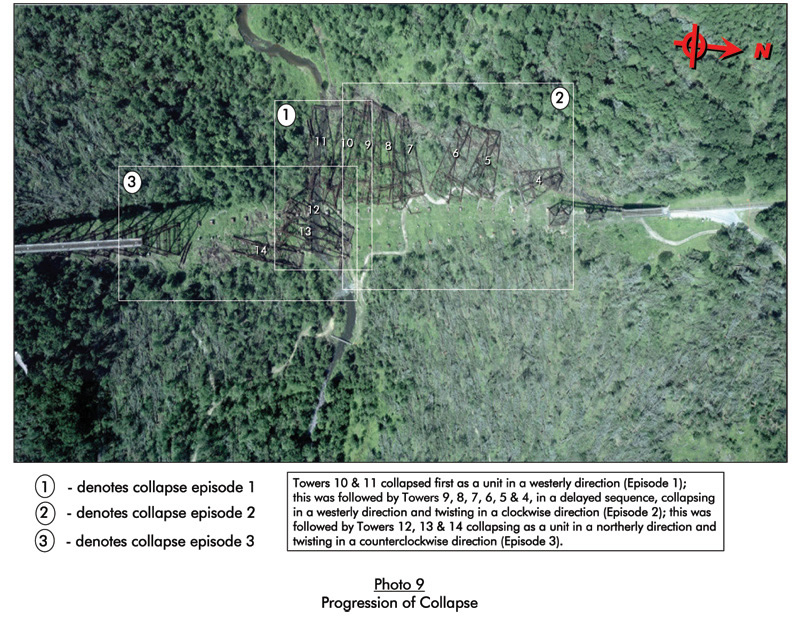 PA Dept. of Conservation and Natural Resources
This aerial view of the Bridge shows the destruction and the order in which the various supports fell.

In late June 2002, the bridge was closed to tourist trains. Two months later, pedestrians were no longer allowed to walk across the viaduct. Randy Kraft reported in the Allentown Morning Call, “Structural studies have determined the bridge may become unstable ‘under certain wind conditions.’ It spans a tree-filled valley that is often very breezy.” Although this was a historic landmark, the repair of the bridge, to the extent of it carrying what it once could, was unlikely due to costs of millions over numerous years. Not only had some of the girders been bent from all the weight throughout the years, but also rust had eaten through parts of the columns in addition to the cross-members. State and park officials were afraid it might not be able to endure high winds. They were soon to find out how true their fear was.

Although it would cost millions to rebuild the bridge to what it once was, efforts were being made to stabilize it. On July 21, 2003, many workers were instructed to leave the site early due to the weather. With wind speeds of more than 90 miles per hour, an F-1 tornado tore through McKean County. The nature of the tornado vortex caused the bridge to be attacked not only from the east, but also from the south. The destruction occurred in three phases, due to various wind locks which the Department of Conservation and Natural Resources says permitted “limited longitudinal thermal movement and limited resistance to lateral forces.” Hidden deteriorations facilitated the failure of the anchorage system from the base of the towers’ eastern face. 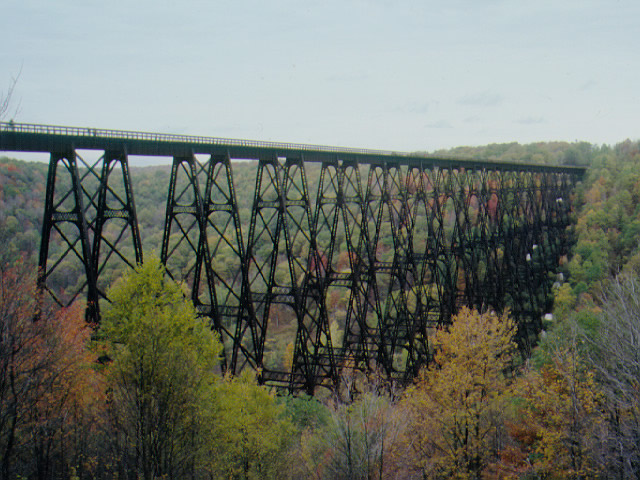 PA Dept. of Conservation and Natural Resources
The Kinzua Bridge as it appears in the memories of those who have seen it.

A section was not only separated but became airborne. The next hit was mainly credited to the return to the ground of the airborne segment. And finally, as the tornado headed north, there were confined inflow winds from the south. The director of the McKean County Historical Society, Dick Robertson, told the Lebanon Daily News: “The storm did it in. I have lost one of my best friends.” The future of the bridge was contemplated. Rob McGonigal, the editor of Classic Trains magazine, said to the Buffalo News, “You’re getting into a situation there that there’s so little of the original structure left that it’s a reconstruction instead of a renovation.”

The total damage: 23 of 41 spans collapsed in addition to eleven supporting towers- all thought to have collapsed within 30 seconds. Stabilization and construction efforts began in 2009 and are on-going.

Although the majority of this magnificent structure is no longer standing, many people still visit the area today. The bridge has become a part of history, particularly in the engineering field. Once thought of as the eighth wonder of the world, the Kinzua Bridge is no longer passable. Nonetheless, it is a part of history and a landmark of Pennsylvania.