From the Farm to the City: The PA Farm Show 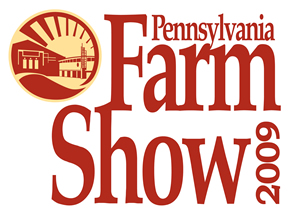 Where do you find square dancing tractors, pony pulling contests, and life-sized butter sculptures under one roof? Imagine a city with so many animals that it is the closest thing to Noah's ark since Noah's ark. The Pennsylvania Farm Show is just such a celebration of animals, equipment, entertainment, and trade from the agricultural world. The event, which occurs each January in Harrisburg, has been described as the "annual meeting place of farmer and city-dweller," and a place where "sod-busters and city slickers come along by the thousands." In other words, the Pennsylvania Farm Show literally has something for everyone. For almost a century, the event has expanded and emerged as the United States' largest indoor agriculture and livestock event.

Nearly 500,000 curious visitors travel from throughout the state and the Northeast to the eight-day agricultural extravaganza, which features 300 commercial exhibits and over 13,000 competitions. Proud farmers confidently display everything from maple syrup, rabbit meat, and mushrooms to Christmas trees, cattle, and corn. Thrilling and potentially comical events like circus rodeos, arena carriage racing competitions, and honey extraction demonstrations transform agriculture into a spectator sport. Catering to those of all ages, the Farm Show presents hands-on learning activities, such as lace making, wheat weaving, and blacksmithing, and offers rides on a 60-year-old merry-go-round to youngsters. For attendees with a competitive spark, there is a "Farm Show's Got Talent Contest" and a local celebrity cow milking competition. The Farm Show's equipment display showcases antique farming equipment, as well as the most up to date technologies in farm machinery. 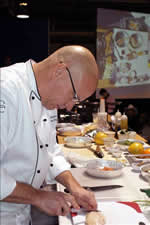 Culinary cravings are perhaps the most popular incentive for attending the Farm Show, which reports over $1 million in food sales over its eight-day span. Food Network cooks and chefs from area restaurants perform demonstrations and compete in culinary competitions throughout the week. If entertainment is not enough enticement, the food court features some of the most delicious, fresh, and creative foods from across Pennsylvania. While there are many agricultural county and state fairs across the United States, the extravagance and magnitude of the Pennsylvania event renders it a show above the rest.

Before the concept of a farm show phenomenon entered the minds of the Pennsylvania state authorities, an appreciation of agriculture was a common idea to the citizens of the state and country. From the beginning of Pennsylvania's recorded history, educational exhibitions were organized to promote the sphere of agriculture. William Penn himself established agricultural awareness by organizing the state's first agricultural show in Philadelphia. In the 1700s, many states across the U.S. held fairs to showcase cattle and sheep. The concept developed and soon emerged in Pennsylvania marking the first Pennsylvania Cattle Show. In 1820, the Pennsylvania Legislature enacted a law to organize farmers in Chester, Delaware, Montgomery, and Philadelphia counties to hold a formal annual event. This legislation denotes a turning point in the development of an annual Pennsylvania farming exposition. 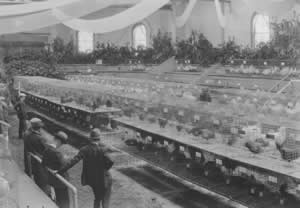 ExplorePAHistory.com
Judges analyzing thousands of chickens during a contest at the Farm Show.

Pennsylvania agricultural authorities designated Harrisburg as the host of the first official statewide agricultural exhibition in October 1851. A vast, 15-acre, fence-enclosed plot of land along the bank of the Susquehanna River was the site chosen best-suited for the occasion. Approximately 20,000 guests from Pennsylvania and neighboring states voyaged to the host city to behold 100 animal sheds, multiple open areas for livestock exhibitions, and an isolated plot for a plowing contest. Triumphant farmers were awarded cash prizes for their prized horses, sheep, and poultry; Cultivators were able to flaunt wheat, produce, and tobacco; Craftsmen showcased quilts, carpets, and baskets. At the conclusion of the show, the Pennsylvania State Agricultural Society reported: "It was not surprising, that the farmers of the State took hold of the subject with avidity, and gave to its first exhibition a show of numbers and contributions which promised for the future their hearty support." The impressive participation and involvement during this first fair set the tone for the next 65-years in the development of what has become the present day Pennsylvania Farm Show.

In the years that followed the achievements of the Harrisburg show, the agricultural fair bounced around to an assortment of Pennsylvania locations in an effort to encourage the importance of agriculture in a variety of counties. The traveling fairs accomplished their mission and sparked a phase of county and regional fairs, which ultimately eliminated the interest and necessity for statewide events. Between 1900 and 1916, no statewide exhibition was held. At the end of this period, the State Department of Agriculture hosted a discussion to address the reemergence of a consolidated show. Henry E. Klugh, chief clerk of the state Bureau of Animal Industry, took the reins and offered two floors (about 10,000 square feet) of Harrisburg's Emerson-Brantingham Company building to host the exhibits. The original event location had come full-circle, landing back in Harrisburg. The first Pennsylvania State Farm Show occurred from January 23 to 25, 1917, with the following guidelines: no admission charge, competitive exhibit of farm products (corn, fruit, vegetables, dairy, and wool), display of farm machinery, and educational meetings. 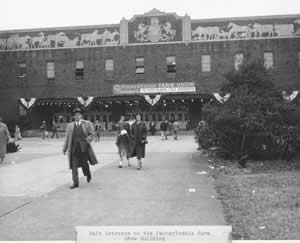 ExplorePAHistory.com
The Farm Show Building’s main entrance and its sculptures of farm animals, seen in 1955.

Why host a show dedicated to agriculture in the dead of winter? According to E.K. Hibshman, secretary of the breeders' and dairymen's organization and assistant director of agricultural extension at the Pennsylvania State College, "The original Farm Show Committee set January as the month best suited for holding the show. We realized that farmers at that time of year wanted to look ahead to the coming season, especially in buying implements, seed, fertilizer and other supplies." The Farm Show founders were clearly confident about their rationale, as the original show attracted 5,000 visitors, and nearly doubled by the following year.

As the years passed and popularity grew, more events, attractions, and exhibitions were incorporated into the Farm Show. Between its premiere in 1917 and its next turning point in 1931, homemaking exhibits, competitive livestock, and maple products were added to the exposition. Increasing entertainment resulted in growing attendance and a mounting need for adequate space. By 1931, over 50,000 visitors were swarming the city's twenty-two buildings that were being used to house the show's exhibits. It was evident that the Farm Show was a growing giant that deserved and required a proper and adequate home. Governor John Fisher claimed that "the show is an expression of the agricultural life of the State and it is the duty of the State to make ample provisions for the care of it," and thus the plans for the Farm Show building commenced. 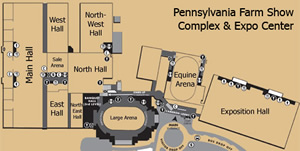 Dept. of Agriculture/Farm Show
A diagram of the current Farm Show Complex and Expo Center with its most recent addition of the Exposition Hall in 2002.

"If you want to keep the Farm Show in Harrisburg, you'll have to get busy"—these were the words of wisdom from Hibshman as the government began to consider locations for a permanent Farm Show venue. A 40-acre lot located along Paxton Creek at Cameron and Maclay Streets was decided on as the location of the official $1.4 million Farm Show building. The building debuted on the Farm Show's 15th anniversary, January 19, 1931. It was a dark red brick structure, which flaunted a cascade of parading farm animals along its upper crown, and spanned 10 acres along the edge of the city. The pattern of cattle, swine, and poultry clearly defined the building as an agricultural haven. A 15,000 square foot addition was completed by the following Farm Show, and a large arena, with the capability of seating 7,600 guests in its 2.2 acre stadium, was erected soon after. The addition of the new arena permitted innovative venues, such as a horse pulling contest and a livestock parade, to be added to the show.

Between 1943 and 1946 the Farm Show was halted by World War II. When peace was restored, the show reemerged in full force. In fact, the Farm Show received its top ranked popularity and highest attendance during the post war years. New developments such as log sawing contests, 4-H contests and presentations, and folk and square dancing demonstrations were added to the Farm Show schedule. In 1955 the entire show was developed around the 100th anniversary of Penn State University, and a four-foot high model of the Old Main administration building was built out of mashed potatoes. Penn State's president, Dr. Eisenhower, claimed the Farm Show was "the greatest show on earth."

In the 1970s, great debate occurred over whether to expand the current building or relocate the Farm Show site. Nearby locations were inspected in Lancaster, Hershey, and Susquehanna Township. Ultimately, the site remained in Harrisburg, and numerous renovations were made to fulfill labor and industrial regulations, as well as enlarge and upgrade the facility. At the completion of the makeover, the Farm Show proudly unveiled a large double level arena, northwest building, north building, west building, east building, main building, and small arena. Finally, in 2002, an $86.2 million expansion project updated the Farm Show building to its current size and structure. The present day Farm Show complex spans an unbelievable one-million square feet, and provides a place for the colossal event to occur under one massive roof. 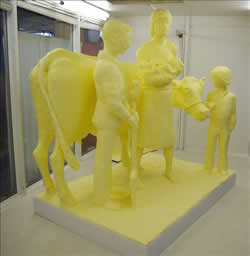 Farm Show Picture Gallery
This butter sculpture of a rural family marks just one of the agricultural commodities featured at the Farm Show.

Through its long history, the Farm Show has continued to be a Harrisburg staple. Local schools, scouts, churches, and community groups embark on field trips to the annual festival. The show expands and incorporates new innovative ideas, thanks to its countless contributors and participants, to make each year's show a little different and more educational than the previous. Commodity Queens promote company products, the Pennsylvania Food Pantry demonstrates the food processing industry, and recently businesses promote health and environmentally conscious agricultural practices. For example, in 2009 the Lake Erie Biofuels turned 900 pounds of butter into nearly 100 gallons of fuel to donate to the Pennsylvania National Guard. E.K. Hibshman explains the success of the Farm Show at fulfilling its ultimate purpose: "The greatest thing that has come out of the Farm Show is that it has brought all agricultural agencies in the State together, working toward a common goal—the advancement of Pennsylvania agriculture."

The Farm Show not only reaches the 500,000 visitors that swarm the arenas each January. The scope of the Farm Show has become so large that whether or not farm show fanatics make the journey to Harrisburg, fans of the show can catch the action from the comfort of their own homes. The Pennsylvania Cable Network broadcasts the event and reaches over 3.3 million households each year. In 2008, the Farm Show received 140 total hours of airtime, and select special events and coverage were viewed in real-time with live coverage for 64 hours. The importance of the Farm Show in Pennsylvania is evident, but the show has also reached recognition on a national level. It is an event so well-known that it has been named one of the top 100 events to visit in America by Event's Business News. In addition, the event has been a consistent winner of International Agricultural Awards presented by the International Association of Fairs & Expositions.

Whether from the city, the suburbs, or the farms themselves, the Pennsylvania Farm Show is an event that can be appreciated by everyone. The annual affair in Harrisburg, Pennsylvania, attracts thousands of guests to the state capital for an educational, entertaining, and unique event, which showcases one of Pennsylvania's most important industries- agriculture. The famous agricultural occasion, occurring every January, distinguishes Harrisburg as more than just the hub of government in Pennsylvania. Farm Show Complex Executive Director Edward L. Nielsen explains: "Since its early days, the Farm Show has offered something for everyone. With an expanded and improved facility, and growing attendance, I expect the Pennsylvania Farm Show will remain a tradition in the Commonwealth long into the future." The event that brings the farm to the city is truly a fascinating landmark in Pennsylvania's past, present, and future.