The Fastest Half-Mile on the East Coast

For almost 65 years, thousands of local residents have poured into the gates of the Selinsgrove Speedway to hear the thunder of the fastest half-mile on the East Coast. Every Saturday night in the summer, the blistering sounds of the racecars resonate through the veins of the on-looking fans as the cars slide sideways through the turns of the dirt-clay track. Sitting just rows away, the fans feel the adrenaline of open-wheel racing sprinting down the straight-away at over 100 miles per hour. But as the cars pass by in the blink of an eye, so too could the very existence of the storied racetrack that has been a beloved community venue for over half a century.

The Selinsgrove Speedway was built on a 115-acre plot, formerly the Allison-Davis farm. The Dauntless Hook & Ladder Company purchased the land in 1941 and the fire company first used this land to host its annual carnival and night fair in 1942. The speedway was officially constructed in 1945 and was designed by Hollywood stuntman and renowned racecar driver Joie Chitman. In fact, Chitman's daredevil stunts were often featured on the intentionally-wide front straight away.

The first race held at the Selinsgrove Speedway was in the summer of 1946. The 20-lap event commenced an illustrious history of dirt track racing, and some of the early competitors at the track would go on to have illustrious careers of their own. Bill Holland, winner of the inaugural race at the speedway, would go on to win the Indianapolis 500 in 1949. Second place finisher Robert "Red" Byron won NASCAR's first race in 1948 and was the NASCAR series champion in the following year. Current Selinsgrove Speedway promoter Charlie Paige has seen some of these upcoming stars himself. "This track has quite a history. Rusty Wallace has raced here. Jeff Gordon, when he was an unknown kid, 16 years old (raced at Selinsgrove). Sometimes, you are seeing tomorrow's racing stars here," Paige remarked. 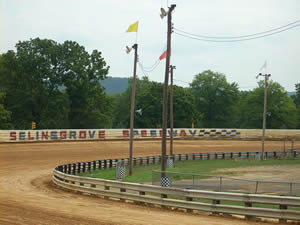 Dincher, Wikimedia Commons
A look at Turns 3 and 4 of the Selinsgrove Speedway.

The racetrack truly became a staple of the Selinsgrove community in the 1950s as promoter George "Buster" Keller realigned the track schedule to host weekly races that drew crowds of more than 5,000 people. The increase in attendance was also helped by the addition of a large wooden grandstand built by the Bogar Lumber Company. Lights were installed at the track in 1953 and the speedway soon became known as a premier racing facility in Pennsylvania. Currently, the speedway features a summer-long season of Saturday night races. The 2009 season marks the 64th overall season and the 47th consecutive season of racing at the track. The weekly event features 358cc sprint cars, late models, stock cars, as well as micro sprints and go-karts that race on Friday nights in a kid-oriented league.

Jimmy Sanders, a 23-year-old Selinsgrove resident, has been going to the track with his family for almost 20 years and even worked at the track for 8 years in a row. His time as a speedway employee allowed him to appreciate just how much the track means to the community. "There are a lot of genuine people that go there. They are real die-hard race fans and they really stand up for their drivers 100%, whether that means cheering, booing, fighting, or even crying about them." Sanders enjoys rooting for fellow Selinsgrove residents Blaine and Matt Heimbach, and the two cousins draw a lot of support from the many other local residents that attend the weekly races. This kind of local support turns strangers into friends at the speedway and is one of Sanders' favorite aspects of going out to the track every Saturday. "I love the bond you make when you meet someone that supports the same driver," Sanders said. "It's really a nice place to enjoy a Saturday night with your friends and family for about $10." 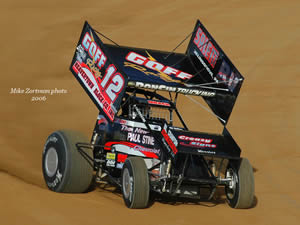 Today the Selinsgrove Speedway continues to be a historical racetrack and popular community site. However, the existence of the speedway remains in doubt as the track's lease expires in 2010. The Selinsgrove Fair Association, current owner of the speedway's land lease, is reluctant to renew the contract with current racetrack promoter Paige. The fair association's reluctance to renew comes as a result of its own decision to sell the property to raise money that will help the company better serve the area.

The sale of the property is not set in stone and many people remain confident that the track will continue to prosper past 2010. The Dauntless Hook & Ladder Fire Company, who has a controlling share of stock in the Fair Association, believes most of its members support keeping the track. Patrick Metzger, the fire company's president, feels hopeful that the lease will be renewed. "I think it would best serve the fire department to keep the speedway a speedway, and I think we can leave the speedway alone and sign another lease from Charlie. We have a lot of members [of the fire company] who only became members so they could go to the races," Metzger commented in Selinsgrove's local newspaper The Daily Item.

The town's economy would take a hard knock if the speedway is sold, but the local community would feel the pain much, much worse. The "fastest half-mile on the east coast" has been a cherished venue in the hearts of Selinsgrove residents for almost 65 years and would be greatly missed if a new land lease cannot be created. The great food, loyal friends and families, and exciting racing action has become and integral part of the Selinsgrove community and the legacy of the track will remain as one of the greatest speedways in Pennsylvania.