The early August sun begins to set as its rays cascade down onto the mountain tops, shedding the day’s last light over the town. The mouthwatering aroma of charcoal barbecues and fried funnel cakes enters the nostrils as people line up for a taste of the goodies. Piercing shouts fill the air as two outhouses cruise down Main Street at breakneck speed, each powered by a group of four men in a race to the finish line. One crosses milliseconds before the other as the pushers collapse to the ground, exhausted from the all-out sprint. To an ordinary passerby, the sight of outhouses thundering down a town street might be quite a shock. To the thousands who line the streets every year on Founder’s Day to enjoy the spectacle, it is pure excitement and elation.

Dushore, seat of Sullivan County, was founded in 1859 by Aristide Aubert DuPetit-Thouars, a man who “was imprisoned for killing 33 deer with his bare hands, but they couldn’t prove it,” according to local lore recalled by lifelong resident, Ryan Chase. Dushore is a quaint little town of a little more than 600 people. A single traffic light hangs down in the intersection between Main Street and Route 220. Shops, restaurants, and businesses line the street on either side as people walk down the sidewalks, cordially saying hello to each other as their paths cross. People are friendly in this small town, and while walking around, visitors get a feel of how closely-knit this community is. Residents are proud of their town, and that pride is no more evident than on Founder’s Day, a yearly celebration held on the second Saturday of August. With vendors and visitors coming from miles away to participate in the special event, Founder’s Day has evolved into something bigger than anyone anticipated. 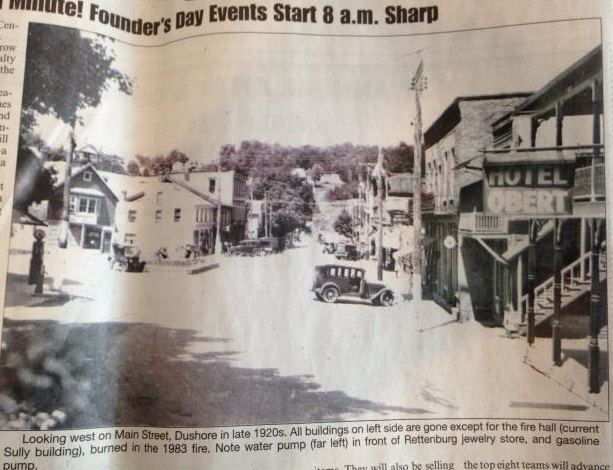 In 1992, on the second Saturday of August, Dushore’s Founder’s Day started. Put on by the Dushore Business Association, a Little League baseball game featuring the Dushore Red and Blue Caps took place, as well as an all-star basketball game. The event ended with fireworks that had been previously rained out from the Dairy Parade, an event that had been held a few weeks prior. In 1995, the Lions Club sponsored a three-on-three basketball tournament, which would end up a staple event of Founder’s Day. With the various sporting events came a few vendors and a pet parade. A couple of tables lined the sidewalks in front of the businesses where store owners would give out mugs of root beer, trying to promote their businesses. Altogether, the earliest Founder’s Days attracted fewer than 100 people.

But, from that August weekend in 1992, there was a dedicated effort to expand Dushore’s Founder’s Day into a festival thousands could come out to enjoy. New activities were created to add to the basketball tournament and attract larger crowds. Events now include a pet parade, a 5k run/walk, a 10k run, a motorcycle run, a petting zoo, a toilet seat auction, and an antique car show. There are also numerous vendors with food and crafts, and various other attractions. Yet, without fail, the final two events on the schedule are the most popular: the fiercely competitive Roll-A-Keg and the Outhouse Races conclude the day.

The Roll-A-Keg event consists of a hay bale-lined course 50-feet long with two lanes and two water-filled kegs weighing in at around 145 lbs. Two teams of four, each split two and two, must roll the kegs down and back; one set rolls them down, while the others switch off and roll it back. Each person must keep one hand on the keg at all times, and the team that crosses the finish line first wins.

For the crowd-favorite Outhouse races, the guidelines for outhouse design, as well as the race day rules, are fairly simple. Each outhouse team consists of four pushers and one driver. The pushers must keep contact with the outhouse throughout the entire race all the way through the finish line as the driver attempts his or her best to keep the “vehicle” under control. It may seem unlikely, but fans are also in on the action as occasionally an outhouse will careen out of control towards the spectators. The race course runs up Main Street, around the stone monument, and back down to the start line.

The monument is an interesting feature of the race. It sits in the center of town, commemorating the service men who died fighting in the Second World War. The men featured in stone were from Dushore. The actual stone and plaque are seated above a large circle of grass held up by a stone wall. Ryan Chase noted that the stone face has been driven into by cars and trucks a vast number of times, often due to the slightly inebriated state of the vehicle operator.

Visitors may often wonder how these two unique races came into being; the answer lies with the local Lions Club that plans and runs Founder’s Day. The club invites vendors to the event and places ads in The Sullivan Review, Sullivan County’s newspaper since 1878, to attract visitors and competitors alike. One club member, Spencer Davis, can be credited with bringing the Roll-A-Keg and Outhouse Races to the celebration.

Davis stumbled upon the Roll-A-Keg event while visiting a brewery in Ontario, Canada, so he and his wife decided to add the event to Founder’s Day in 2001. One year earlier, he introduced the Outhouse Races after coming “across a story about a small town in Minnesota that raced outhouses set on skis across a frozen lake.” Obviously no ice could be found in the middle of summer, so the next best thing was to attach some wheels, a steering column, and then push.

To most people in this country, coming upon a spectacle like the Outhouse Races may come as a shock initially. But to the thousands of people who come out every year to cheer on their favorite teams, it is a tradition like no other. Teams have come from as far away as Philadelphia to take part in this exhilarating race. From the ever popular Super Septic Suckers, to the always quick Pepe-Le-Poopa, the ingenious teams and their names consistently create a fiercely competitive environment that even the most conservative person could appreciate.

Although there is a small cash prize, the bragging rights gained from winning are much more important to those who participate. Lately, the competition has gotten so fierce that security has come into question after fights broke out between the winner’s and loser’s supporters, with rocks and glass bottles thrown at a person’s truck in anger. Participants in the race say that there is nothing like it. Ryan Chase explained: “The feelings you get as you sprint down packed Main Street towards the finish line as everyone is yelling and screaming around you cannot be put into words. This race truly celebrates our town’s founding in style.”

To many, Founder’s Day is about enjoying a beautiful summer’s day, relaxing with friends and family while enjoying some great food and events. Every year vendors come from all over to offer their unique food choices. Whether it be a simple tasty fried treat or some homemade slow-cooked barbecue, there is something for everyone’s taste buds to enjoy. A few of these vendors, such as Colonial Concessions, have been at Dushore’s Founder’s Day since the beginning and are favorites among the people who attend. Other vendors come to show off their arts and crafts, with items such as candles, handmade goods, and t-shirts.

According to MaryBeth Minier, mayor of Dushore and vocal member of Dushore’s Lions Club, the Dushore Business Association’s original goal was “to bring people to the local businesses in the hope that they would like to revisit the cute little town.” They felt that the town was dying and was in need of an influx of people from the younger generations. Their solution was to start a celebration in honor of the Borough of Dushore Foundation. The first few years were rough, but the celebration has grown, and its popularity has soared. John Shoemaker, owner and operator of The Sullivan Review, said “People call in January to ask when Founder’s Day is to schedule vacation days.” The single day event draws visitors, young and old, for a relaxing long weekend. This translates into great business for all the small shops in the area, something that the association hoped would happen from the start.

Dushore’s Founder’s Day appears to have become a tradition that will be celebrated for years to come. With lots of fun, food, and exciting games for kids and adults of all ages, people will continue to flock to this event and remember the founding of a small, close-knit town. According to Mayor Minier, people will continue to come out to Main Street with their chairs, drink beer, and watch outhouses as they blitz by.

©The Sullivan Review
3-on-3 Basketball Tournament

©The Sullivan Review
3-on-3 Basketball Tournament