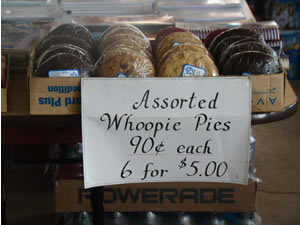 Caitlin E. Singer
A common sight at roadside stands in Pennsylvania. A variety of flavor options are available at this Amish market along Route 15 about 20 miles south of Selinsgrove, Snyder County.

Where can you spend your day launching big fat oreos (BFOs) at a target, playing checkers with black-and-whites, and watching amateur gob eating contests? Why, the Hershey Farms Whoopie Pie Festival, of course! Located in Strasburg, just outside of Lancaster, Hershey Farms has been putting on this delicious event since 2005. As Lancaster’s favorite dessert, it seems almost essential to have a day to celebrate the whoopie pie!

Whoopie pie lovers from across the state travel to Strasburg for this now annual festival, which is sure to continue for many years to come. It’s just a fun day for children of all ages to come out and pay tribute to a culinary work of genius. Mary, age 63, had this to say about her experience at the festival: “I’ve been coming to the festival since it began, and it’s just fun to see everyone having a great time. I even tried the whoopie pie eating competition! Even though I didn’t win, it was fun to try. I will be back again next year!” As you can tell, this festival is not just for kids, but for anyone who has an appreciation for whoopie pies! 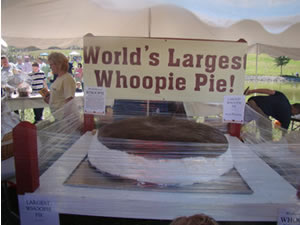 Besides the games and activities going on throughout the event, a world record whoopie pie, weighing in at a whopping 225-pounds, is on display for all to witness. Try not to get to close! This mouth-watering gob of mass proportions can be very tempting to those of us with a sweet tooth. It was very hard for me to stop myself from swiping my finger across the edge of the sweet, creamy frosting. I did, however, manage to hold back considering the confection was being donated to a local homeless shelter to be served as dessert on Thanksgiving.

Some readers, who have not been fortunate enough to experience the yummy-goodness of a whoopie pie, may be wondering what exactly it is I am talking about, asking “What’s the big deal anyway? It’s just another pie, right?” In fact it is not a pie all. This sandwich-like cake, or cake-like sandwich, if you prefer, traditionally consists of two round pieces of chocolate cake held together with a sweet, creamy icing. If one saw a whoopie pie and did not know its official name, he or she might describe it as an oversized oreo cookie or a “Big Fat Oreo” (BFO for short). Whoopie pies are also referred to as “gobs,” and some call them “black-and-whites.” No matter what we call them, I think everyone can agree that this scrumptious treat is worth sacrificing your waistline for!

There is some debate as to where and how the whoopie pie originated. Mainers claim that they invented the whoopie pie in the 1920s, which conflicts with a recent New York Times article that gives the Amish in Pennsylvania credit for creating the pastry. As a way of responding to the claim in the previously mentioned article, students from the Ashland High School Youth for Government club will be traveling to Augusta (Maine’s capital) in hopes of proposing that the whoopie pie be named Maine’s official dessert. Obviously these Mainers feel very strongly about this delectable dessert. I mean, who wouldn’t?! 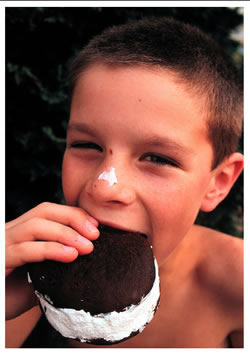 Some Bostonians also claim to have created the first whoopie pies as well; however, two different stories have emerged from the city, probably making Boston’s claim seem less viable. One story involves a marshmallow fluff manufacturer who claimed to invent the whoopie pie in order to increase the sales of its main product. The other story out of Boston mentions the Berwick Cake Company. Older generations claim to have eaten whoopies from that company growing up and believe that Berwick was the first bakers of the treat; however, the company does not stake a claim to the dessert.

Although those in Maine and even Boston may consider themselves the inventors of the whoopie pie, gob, or black-and-white, whatever one prefers to calling it, Pennsylvania Dutch bakers have very strong stories to back up their side of the argument. According to many food historians, Amish housewives in Pennsylvania Dutch Country made the first whoopie pies. The most populous Amish community is located in Lancaster County, Pennsylvania, with approximately 16,000 of these plain people residing there. This explains why the Whoopie Pie Festival takes place in Strasburg, Pennsylvania, as it is in the heart of Amish Country.

Based on Pennsylvania history, Amish women invented the whoopie pie. Holding up with their custom of avoiding wasting ingredients, the women would drop excess cake batter into mounds and bake them. Then they would take two of the mounds and sandwich them together with a creamy frosting. It remains in question how the whoopie pie got its name but there are two common stories floating around, one more believable that the other. Some say that when Amish men were exhausted from a long morning’s work they would open up their lunch pails and see that this delicious dessert was packed for them and they would yell, “Whoopie!” Now I know it would be very exciting to have a surprise whoopie pie packed in my lunch, but I really can not picture grown men shouting about it. A slightly more believable rendition of this story includes Amish children. When the kids would find these pastries in their school lunch boxes, they would yell “Whoopie!” with much excitement. To me this tale is a little bit more realistic, but either way whoopie pie is a fun name! 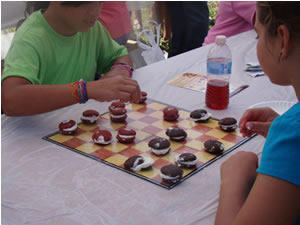 Caitlin E. Singer
one of the many fun activities involving whoopie pies included whoopie pie checkers! Not only was this a fun concept, but these girls got to eat the sweet treats when they were done.

There is no arguing that Pennsylvania is a huge powerhouse for whoopie pies. The delightful indulgences are a staple in roadside stands, farmers markets, and even in gas stations and groceries stores across the state. For those in the western portion of the state, however, whoopie pies might be unheard of. In the area surrounding Johnstown, Pennsylvania, which is just over an hour drive east from Pittsburgh, gobs are king. Gobs are just another name for whoopie pies. Unlike cakes, which lose icing once they are wrapped, gobs can be easily wrapped in cellophane and are a nice addition to a bagged lunch because they can be eaten by hand. This is how the treats gained popularity. Susan Kalcik, a folklorist with the Southwestern Pennsylvania Heritage Preservation Committee in Johnstown said, “I’m convinced that the name gob is related to the coal mines. Lumps of coal refuse were called gob piles. These working people adapted the name to the dessert.”

Whoopie pies are becoming increasingly more popular across the country. Though cupcakes seem to be the current trend in the United States, with bakeries popping up all over and even television shows dedicated to them, The New York Times names the whoopie pie the next big thing in trendy desserts for 2010. The popularity of the pastry might be due to its portability, as it can easily be served at social gatherings or even to children, who are often messy eaters. Furthermore, on top on the traditional chocolate whoopie pies with white icing, which remains the most popular version, several other flavors have emerged into the whoopie arena. From pumpkin cakes with cream cheese filling, to vanilla cakes with peanut butter filling and even to jalapeno cornbread whoopies and every flavor in between, one can only imagine the number of flavor combinations that have been generated. At the Whoopie Pie Festival over sixty variations were available!

Although the mystery remains unsolved as to where the first whoopie pies were made, it is safe to say that the delicious confections have been a major fixture in Pennsylvania culture and will remain significant for years to come. For those who have never tried one of these scrumptious desserts, I hope you decide to pick one up during your next visit to the farmers market. You won’t regret it!