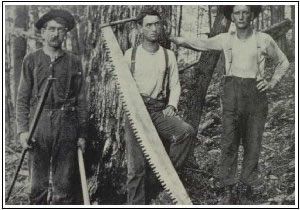 PA DCNR
A trio of wood hicks pose with a saw and other equipment.

The clank of metal, the shouts of men, and the thunderous collapse of trees are merely echoes in the forests of Cameron County today. Once though, around the turn of the twentieth century, the lumbering business was big—really big—throughout Cameron County and across the heavily forested region of north central Pennsylvania. Eager entrepreneurs, followed by a caravan of tavern owners, teachers, pastors, and craftsmen, moved into the woodlands to log the white pine and hemlock trees. Across the state, busy lumber towns were quickly established and, once the supply of timber had been exhausted, were just as quickly abandoned. By the 1920s, the lumber industry had chopped its way through the Pennsylvania forests, leaving behind a stumpy landscape and a scattering of deserted towns. Cameron County's Hicks Run, located off route 555 in Driftwood, is but one example of the many settlements in northern Pennsylvania that quickly rose and fell with the trends of industry.

The story of Hicks Run's fast rise and even faster fall is shared by towns all across the state. "Laquin, Masten, Grays Run, Rickets, Sonesville—the list of names is almost endless; this roll-call of ghost lumber towns in Pennsylvania," wrote Ghost Towns of Central Pennsylvania author Thomas Taber III. "Gradually, even their names are slipping into oblivion to be eventually known only to the historian and a few local citizens having camps in the locales." Today, what is left of these towns, are haunting memorials to once booming industries. 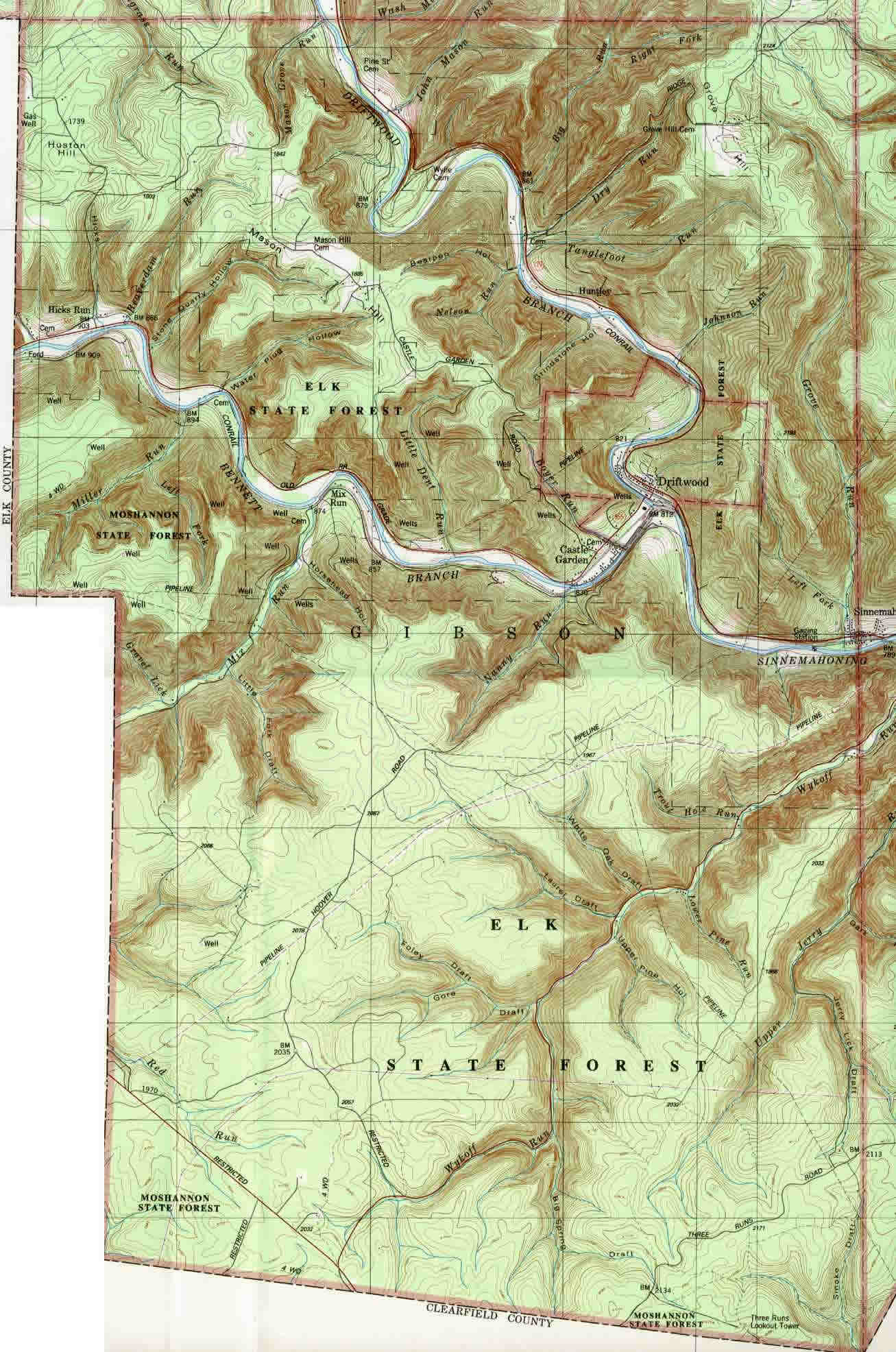 U.S. Geological Survey
Hicks Run is in the upper left of this map of Cameron County.

The location of Hicks Run today is unimpressive—grassy, forested, forgotten—a land giving no indication that a vibrant community and industry once existed there. Over a hundred years ago, though, Hicks Run was a place for new business and prosperity. In 1904, multimillionaire John E. DuBois, founder of the town of DuBois in Clearfield County, purchased land in remote Cameron County in order to log the reservoir of pine and hemlock trees in the area. After 200 years of deforestation, the lumber industry had already ravaged much of the Pennsylvania woodlands and its resources were close to depletion. Still, this did not stop DuBois from building a lumber mill and camp at the Hicks Run site and beginning timber production in July of 1905. "The bygone town of Hicks Run, you might say, was an after-thought," Samuel A. King, contributing author to the series Logging Railroad Era in Pennsylvania, wrote. "John E. DuBois and his tannery partners, the two Van Tassel brothers, originally acquired these timberlands as future reserves for their business operations in DuBois, a city thirty-seven miles west of Hicks Run."

Before business at Hicks Run could bloom, the rural settlement needed to forge a connection to the busy world that existed just beyond its forests. In 1904, the Bennetts Branch bridge was completed, which established a link from Hicks Run to the Pennsylvania Railroad (P.R.R.). "This vital connection with the P.R.R. was like an umbilical cord for the H.R.R.R. (Hicks Run Railroad), since there was no other rail connections," wrote King. Through the rail link, the community surrounding the Hicks Run lumber camp began to flourish. When the saw mill opened a year later, there were thirty households at the Hicks Run site, three streets (Water, Main, and Church), and nearly 500 men who worked at the lumber camp during the active logging months from May to July.

For the men who worked long days at the lumber camp, the surrounding community was their playground when released from work. The lumber men, known as "wood hicks," endured strict rules while living in the camp dormitories, and often escaped to the pubs and taverns of the town to relax. The wood hicks were forced to obey a 9:00PM "lights out" time and a zero-tolerance for alcohol policy. During meal times, they were forbidden to speak to each other and were berated if they did. Fortunately, the forest the men logged also provided an outlet for them. The streams full of trout and the woods full of game offered many hunting opportunities.

The conditions of the Hicks Run lumber camp were five-star by the standards of the early twentieth century. The men enjoyed comfortable housing and fine dining and had the luxuries of telephone service, running water, electricity, mattresses, and steam heating—something which could not be said for the other large lumber camps in the area. According to King, "Such large camps were out-of-the-ordinary because nearly all lumber companies disdained the responsibility of maintaining camps." Generally, other camps built wobbly shacks for the wood hicks that were torn down in the off -season and then rebuilt again in the spring. "Such flimsy structures were no match for John E. DuBois's modern camps," King wrote. 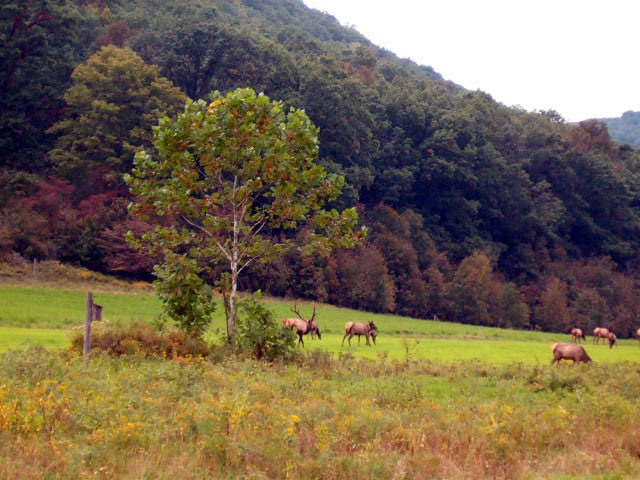 Rich, Picasaweb
Though the trees are back in Hicks Run, the chief reason to go to there now is to view the herds of elk.

In accordance with the strength of the lumber mill, the Hicks Run community grew to comprise roughly one hundred households by 1908. With the expansion, another street was added to its list of four, commonly known among citizens as "Red-headed Women's Row." The Hicks Run store sold beds, mattresses, blankets, axes, shoes, iron bed frames, and underwear just to name a few items. The community was still in its infancy, yet it was bustling and growing quickly. In four short years though, the little, budding town would belong to the pages of history.

When Hicks Run was established, DuBois had envisioned the town and the lumber mill enduring for seventeen years at the least. The business and the community were lucky to have existed half as long as DuBois' dream. Due to an increase on property taxes in Cameron County, DuBois was forced to double the lumber mill's output to afford the added costs. The lumberjacks worked furiously around the clock to log the forest and consequently, exhausted the woodlands rapidly. By 1912, the lumber mill was forced to cease production after nearly eight feverish years of business.

"The last logs went through the saws in July 1912 with the customary shrieking of the whistle," King wrote. "By the second week of August, machinery from Hicks Run began to arrive in DuBois." With the hardware and the business gone, the people abandoned the area as well. Without the hectic industry to sustain the community, the settlement of Hicks Run evaporated into the landscape. Today, Hicks Run is still known to locals of Cameron County—known as a large clearing for elk viewing; as an old cemetery; as the location of various hunting camps. Few know the history behind the vacant landscape. "Much of Hicks Run today is either State Game Lands or the Elk State Forest," King wrote. "As motorists speed over Route 555, few suspect that here flourished a lively community for seven and half years from 1904 to 1912." 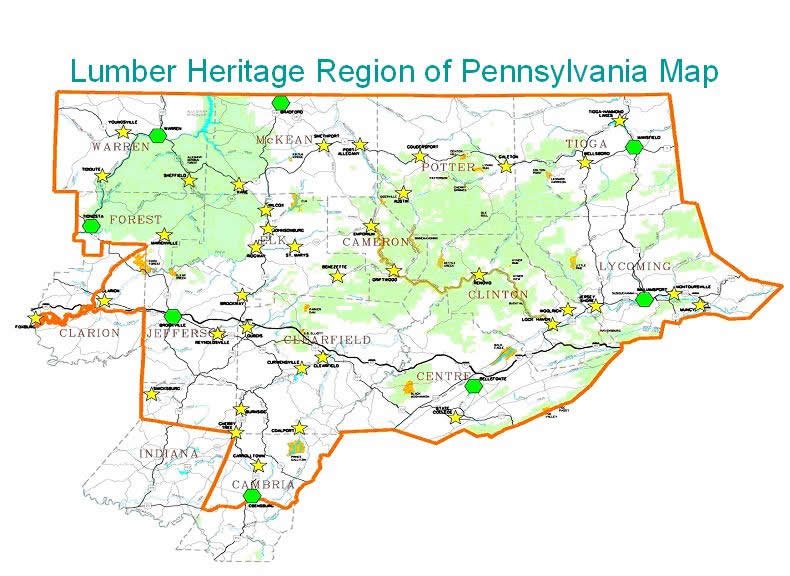 Countless towns established in support of industries, such as the coal, oil, and coke industries, suffered similar fates as Hicks Run. The town of Norwich in McKean County, which once boasted a population of 5,000, is now a wild game land. "Like a shooting star, Norwich rose briefly to prominence and just as quickly vanished," wrote McKean County's Bradford Era reporter Waldo Pettenati. "Its rise and fall pantomimed the timber industry whose voracious appetite for virgin trees resembled a horde of locusts, swarming into an area, feasting, and then moving on."

Hazelhurst, another ghost town victim in McKean County, was once a well-known center for glass making, with four glass factories in operation from 1899 to 1929. Barclay in Bradford County, an early twentieth century coal mining town, diminished when strip mining moved into the area. Landrus in Tioga County, the first lumber town to utilize electricity in its camp in 1888, vanished once the railroads changed course. Truman, Beechwood, Cameron—all once lumber mill establishments in Cameron County, are now small villages and neighborhoods. Although the excitement and the activity have long been gone from these sleepy rural towns, their history is preserved as a cultural reminder to the inhabitants and descendents of the locations today.

The Lumber Heritage Region (LHR), a part of the Heritage Parks Program with the DCNR, was established in 2001 to honor the great lumber empire that dominated north-central Pennsylvania for nearly 100 years and to promote the growth of cultural and historical learning. The LHR is Pennsylvania's eleventh and largest heritage region, encompassing fifteen counties that are steeped in the lumber tradition: Cambria, Cameron, Centre, Clarion, Clearfield, Clinton, Elk, Forest, Indiana, Jefferson, Lycoming, McKean, Potter, Tioga, and Warren. "The 12,500 square miles of rural Northcentral Pennsylvania have remained in relative obscurity ..." the LHR's Interpretive Plan for August 2005 states. "Yet despite its low visibility it harbors a wealth of natural, cultural, and historic resources..."

The Lumber Heritage Region is located in the Cameron County Courthouse on East Fifth Street in Emporium. Through the work done by the LHR, the forgotten histories, the lost heritages, and the sleepy ghost towns are remembered, uncovered, and awakened. As long as northern Pennsylvania's rich past is preserved and passed on, the reverberating sounds of the once thriving ghost towns will continue to echo between the curving valleys and the sloping hills of the Pennsylvania forests.