The Philadelphia Eagles franchise is currently among the most popular in the National Football League. The Eagles have won three NFL championships since 1948, and they have attracted an enormous and dedicated fan base in the city of Philadelphia and eastern Pennsylvania. Yet few people realize that the Eagles franchise has its roots in a little-known, early twentieth century football club named the Frankford Yellow Jackets.

The current National Football League has grown from a turbulent history. The early twentieth century saw dozens of football clubs spring up, only to fold quickly after just a few seasons. At the time, professional football struggled to attract the kind of fan base that was present at the collegiate level. Teams like Notre Dame, Syracuse, Yale and Harvard were the main attractions in the relatively new sport of football.

The Jackets were tested in 1922 when they played a scrimmage against their first NFL opponent, the Rochester Jeffersons. Although they were still an independent team, Frankford came away from the match with an easy 20-0 victory. The Yellow Jackets scrimmaged several more NFL teams in 1922 and 1923, compiling a respectable 6-2-1 record. It was not long before the NFL recognized the talent of the Yellow Jackets, and the team finally joined the league in 1924.

John J. Fenton, Ghosts of the Gridiron
Frankford, home of the Yellow Jackets, seated 9,000 fans but was severely damaged by fire in 1931.

The Yellow Jackets took the NFL by storm, soundly defeating the Rochester Jeffersons 21-0 in the opening game of the 1924 season. Frankford went on to complete the season with an 11-2-1 NFL record, finishing third in the standings. In the early days of the NFL, teams had to play a minimum number of games per season but were free to schedule more. Between 1924 and 1931, Frankford scheduled more games than any other team in the league, including many non-league games. When the Yellow Jackets played at home, they usually attracted a capacity crowd of 9,000 at Frankford Stadium. At a cost of $100,000, Frankford Stadium was built in 1923 on a converted horse track at Frankford Avenue and Devereaux Street, in the Northeast section of Philadelphia.

Frankford often had to contend with grueling back-to-back games on Saturdays and Sundays. Because Pennsylvania blue laws prohibited the team from playing at home on Sundays, the team was forced to schedule home games for Saturdays. Most other teams in the NFL played on Sundays, so Frankford players would usually play at home on Saturday, ride a train all night to a different state, and play a road game on Sunday.

Despite the team's demanding schedule, the Yellow Jackets were one of the most successful NFL teams of the 1920s. A large part of Frankford's success was the team's ability to attract some of the best players of the era. Some of the best Yellow Jackets were tackle Swede Youngstrum, fullback Houston Stockton and quarterback Harry "Two Bits" Homan. Although he was one of Frankford's finest players, Homan stood just five feet five inches tall and was the smallest player in the league. In 1925, Frankford reached an agreement with Guy Chamberlain, a phenomenal All-American out of Nebraska. Chamberlain had been a player-coach for the Cleveland Bulldogs for the past two seasons, leading that franchise to back-to-back NFL championships. 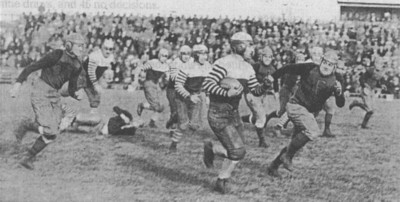 Rich Westcott
Frankford player/coach Guy Chamberlain (far left) chases down an opposing player during a match against the Dayton Triangles.

Chamberlain immediately made an impact in Frankford. As a player, coach and captain of the 1926 Yellow Jackets, Chamberlain led the team to a 12-1-1 record heading into the most important game of the season against Red Grange and the undefeated Chicago Bears. Although each team still had two more games scheduled for the remainder of the season, Philadelphia newspapers were already referring to this showdown as the NFL championship game.

The game was a grueling defensive battle. The Bears finally broke a 0-0 tie with a touchdown in the third quarter, but Frankford's Guy Chamberlain managed to block the extra point. With only a few minutes remaining in the game and the Bears leading 6-0, Frankford faced a critical fourth down and three just outside the Chicago end zone. On this vital play, Houston Stockton managed to complete a touchdown pass to "Two Bits" Homan to tie the game at 6. The Yellow Jackets successfully kicked the extra point and finished the game alone atop the NFL standings. An article in the Philadelphia Inquirer said of the win, "Oh, what a bedlam, as hats and other miscellaneous articles were tossed in the air, and the crowd threatened to break forth in its demonstration in true rabble fashion on the gridiron."

Frankford went on to finish out the season with a 14-1-2 record, making them the undisputed 1926 NFL champions. Eleven of those victories were shutouts. This spectacular season marked the first time in history that a Philadelphia team won a national football championship. Frankford's 14 wins that season remained an NFL record that would not be broken until 1984, nearly 60 years later, when the San Francisco 49ers achieved a 15 win season.

The Yellow Jackets were a true part of the Frankford community. Most of the players lived together in boarding houses near the stadium, ate at the local YMCA, and passed time by playing football with kids in the street. The average salary for a player was $150 a game. The team had a fight song, a band, cheerleaders and a mascot. Any income that was in excess of covering player salaries and team expenses was given to charities in the local community, like the Frankford Hospital or the local Boy Scouts.

The franchise took a turn for the worse at the start of the 1930's. The Great Depression severely hindered the Yellow Jacket's ability to pay off team expenses or attract veteran players with high salaries. The team lost a great deal of its financial support when textile mills closed in Frankford and nearby Kensington. Frankford Stadium was damaged by a fire in 1929, then again by a larger fire in 1931. Unable to secure enough funding to repair the stadium, the Yellow Jackets began the 1931 NFL season as a homeless traveling team. They would not finish. After the first eight games of the 1931 season, the Yellow Jackets were 1-6-1. Following a 13-0 loss to the New York Giants on November 8, 1931, the Yellow Jackets suspended operations.

Two years after the Yellow Jackets folded, the NFL granted the defunct franchise to Bert Bell, head football coach at Temple University, and Lud Wray, a former Yellow Jackets' player. Bell and Wray paid the league $2,500 and assumed $11,000 of the Yellow Jackets' outstanding debt. The pair formed a brand new team under the old franchise and named it the Philadelphia Eagles. 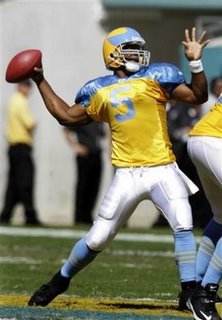 Hour of the Dragon Blog
In 2007 the Philadelphia Eagles donned the old colors of the Frankford Yellow Jackets as part of a 75th anniversary celebration.

The Philadelphia Eagles were not simply a renamed version of the Frankford Yellow Jackets. The new team had an entirely new roster of players and lost all official ties to the Yellow Jackets. The Eagles did, however, continue to wear the powder blue and yellow uniform colors of the old Frankford Yellow Jackets. On September 23, 2007, the Eagles wore a 1933 powder blue and yellow throwback uniform to celebrate the team's 75th anniversary season. The throwback was an honorable tribute to a team that brought Philadelphia its first football championship more than 80 years ago.