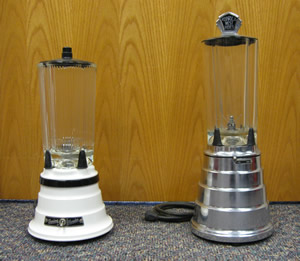 Alan Jalowitz
Waring Blendors in original silver and a later version in white.

Fred Waring is known as “The Man Who Taught America How to Sing” for his nearly 70 year career as a choral conductor and showman. For almost seven decades, Fred Waring and his Pennsylvanians entertained audiences throughout the world on stage, radio, television, records, in motion pictures and toured America and other countries. But music was not the only interest of Fred Waring —he was a dreamer with an extremely active mind and had been interested in gadgets since he was a kid. He studied Architectural Engineering at Penn State, and engineering continued to play a role throughout the rest of his life. He created many devices for stage and television throughout his career that utilized his engineering talents.

Contrary to popular belief, he did not invent the Waring Blendor. He did develop and promote it and also apparently put the "o" in the word Blendor. In 1936, a man named Frederick J. Osius brought to him an undeveloped and seemingly unworkable device. Osius had talked his way into Waring's dressing room after a radio broadcast and told him of his idea for an emulsifying machine for which he had been able to secure a patent in 1933. Waring was intrigued and decided to help him with ideas, money and marketing.

Over the next few months, Waring analyzed and studied Osius' prototype. He decided it needed sealed ball bearings for the bottom drive, propeller-like blades, and a cloverleaf-shaped jar to throw the contents back down. A buddy at the Chrysler Corporation secretly helped him solve the ball-bearing problem. Finally the Waring Mixer, as it was then called, was ready to be presented to the world. Frederick J. Osius unfortunately did not live to see public acceptance of his brainchild, though the royalty arrangement was inherited in trust by his widow. 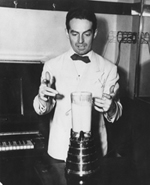 Fred Waring’s America
Fred Waring demonstrating one of his Blendors.

Selling the public on such a new concept was the major hurdle, especially since sophisticated marketing techniques were still years in the future. Fred became the machine's biggest promoter — making the machine as visible as possible and persuading everyone to sample its products.

The members of the Pennsylvanians who played the role of collective guinea pigs for Fred's concoctions, referred to the newly named Waring Blendor as the "thing." It traveled with them in its own converted wardrobe trunk filled with lemon squeezer, can opener, cutting utensils, glasses, ice, strainers and measurers. It was accompanied by another trunk containing canned goods ranging from sauerkraut to mangoes.

Waring not only involved the Pennsylvanians in tasting his creations but in promoting them as well. Musicians would demonstrate the device in Macy's, Gimbel's or Bloomingdale's, and tell everybody how wonderful it would be to make fresh vegetable and fruit drinks. The popular singer, actor and bandleader Rudy Vallee also became a big promoter of the Blendor. Once Waring showed Valley how fast and easy it was to make a frozen daiquiri with the Blendor, he became the device's best salesmen — trying to sell it to every bartender in the United States!

The impact of the Waring Blendor reached far beyond everyday kitchen use for food and drink. Years before antibiotics were in common use, Waring was asked to produce a sealed, stainless steel container for scientific laboratories. Also, a special Waring Aseptic Dispersal Blendor was used by Dr. Jonas Salk to prepare culture media used in developing the polio vaccine. Today, the Waring Blender, as it is now called, is manufactured at a plant in McConnellsburg, PA and is a subsidiary of the Dynamics Corporation of America. The Waring family no longer owns the company.