Freedom at The Lincoln University: Its History and Legacy 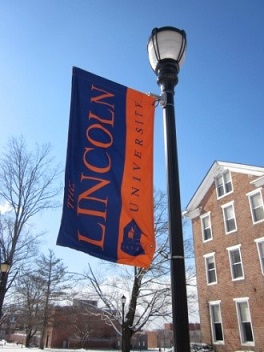 ©Emily Battaglia
A banner waves from a lamppost on The Lincoln University campus.

"If the Son shall make you free, ye shall be free indeed."

This verse from the Gospel of John is the motto of The Lincoln University. Nestled among the farms and rolling hills of southern Chester County, the university takes its motto’s emphasis on freedom to heart. As the nation’s first degree-granting Historically Black College and University (HBCU), The Lincoln University paved a path to higher education for African American males previously unavailable to them. Carl Watton, Vice President for Student Affairs at The Lincoln University, says that historically, the term “freedom” emphasized a “freedom from [slavery],” but today the emphasis is on a “freedom to.” Watton explains, “Historically, it meant a freedom from oppression. Today, it means a freedom [for students] to come here and grow into the young scholars they always had the potential to be.”

Credit: Encyclopedia of the Presbyterian Church, USA
In 1854, John Miller Dickey founded what is today The Lincoln University.

One benefit of attending an HBCU is that an HBCU can provide students with an opportunity to learn about their culture and heritage at a deeper level. Courtney Clarke, a senior at The Lincoln University majoring in English, explains: “In another school, you’d get the main names, the Martin Luther Kings, the Thurgood Marshalls, but you wouldn’t get the full, rich understanding of African American culture. It rounds out your view of education.”

The history of the university begins with James Amos, a freed slave, and Rev. Dickey. After Amos was denied admission to white universities, he was taught by Dickey in the minister’s house. Eventually, Dickey founded the Ashmun Institute with Rev. John Carter, the first president of the university and Professor of Theology. The Ashmun Institute was opened to students on January 1, 1857, with four students enrolled.

Ashmun Institute gets its name from Jehudi Ashmun, a religious leader and reformer involved with the American Colonization Society. Dickey founded the Ashmun Institute to support the education of African Americans at a time when higher education was essentially unattainable to them. According to Horace Mann Bond, a 1923 graduate of the university and the university’s eighth president, in his book Education for Freedom, The Lincoln University was “the first institution found anywhere in the world to provide a higher education in the Arts and Sciences for male youth of African descent.”

The education the university provided to these African American males was strongly rooted in the teachings of the Presbyterian Church. In the university’s early years, the New Castle Presbytery appointed the trustees and faculty of the university. A majority of early alumni entered the Methodist, Presbyterian, and Baptist ministries, with many of the university’s students becoming missionaries in Africa. Christianity was embedded into the daily life of faculty and students at the university. Students were required to attend morning and evening prayers, sermons on Sunday, with optional noon prayer meetings. Though religion was a significant part of life at the university, all students were accepted regardless of religious knowledge. Throughout students’ course of study, the Bible was used as a textbook. Though the university is officially non-denominational today, the presence of religion is still felt on campus, with an active chapel and numerous religious groups for students. 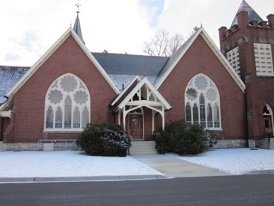 ©Emily Battaglia
The Mary Dod Chapel was built in 1890 and represents the continued role of religion on campus.

The early curriculum at The Lincoln University was split into three areas: preparatory, academic, and theological. The Preparatory Department began as a three-year program, teaching Latin and Greek grammar and English at the level typical of public high schools. When slaves were freed and had greater access to secondary education, the preparatory program was condensed into a one-year program. The Academic Department, a four-year higher education program, taught Biblical and Classical Studies, Science, and Philosophy. The Theological Department was a three-year program that awarded students the degree of Bachelor of Sacred Theology (BST). Students were not accepted to the program unless they already had an undergraduate degree and the university later retroactively awarded the BST recipients a Master’s Degree for their work. Students in the Theology Department studied a number of religious courses, including Hebrew, Biblical History, and Sacred Rhetoric.

The amended charter of 1866 gave more power to the university. The board of trustees increased in size from nine to twenty-one. The maximum property holding rights and the freedom to confer degrees were increased. The university officially changed its name to Lincoln University to honor President Abraham Lincoln, who was assassinated the year prior. Cited in the catalogue for the university, the Board of Trustees felt, “it was considered an appropriate expression of gratitude that the enlarged plans and combined buildings of this educational scheme should bear the worthy name of [Abraham Lincoln] who did so much to lift the crushing loads from the mind and the heart and the body and the manhood of the African.” 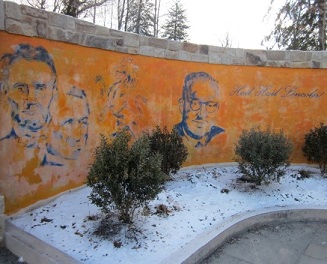 ©Emily Battaglia
The entrance to The Lincoln University is adorned with important figures of the university's history, including Abraham Lincoln and Thurgood Marshall, shown above.

Throughout the years, Lincoln University has continued to grow and expand. In its first graduating class, there was one student; in its second, there were nine. Today, The Lincoln University enrolls about 2,000 students and in 2012, graduated nearly 500 students. The university grew from the original three departments to 22 undergraduate programs and four graduate programs. In its first one hundred years, Lincoln University boasts graduating twenty percent of the United States’ African American physicians and ten percent of the United States’ African American attorneys. 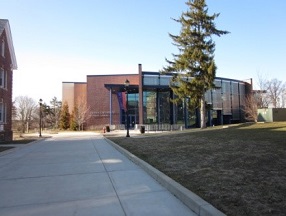 ©Emily Battaglia
The Student Union Building is a central meeting place for social groups on The Lincoln University’s campus.

The Lincoln University has strong ties with the civil rights movement. The university is located in an area rooted in the Quaker faith, a religious sect that had a long history of involvement with the Underground Railroad. 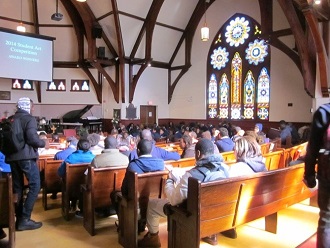 Just across the street from the entrance to The Lincoln University sits Hosanna Church, a stop on the Railroad. James Amos, the original student of the university, was a church trustee. His desire to become an ordained minister eventually led to the founding of the university. Today, the connection between Hosanna Church and the university carries on. Students, faculty, and staff support the small brick church through service.

The university is also tied to the civil rights movement through one of its most notable alumni, Thurgood Marshall, the first African American U.S. Supreme Court Justice. Marshall graduated from The Lincoln University in 1930 before attending law school. During his time at the university, Marshall became involved in civil rights issues. As a college student, Marshall refused to relinquish his seat at a movie theatre in downtown Philadelphia to a white patron. Following his time at the university, Marshall continued to fight for civil rights. Serving as the lead attorney for the National Association for the Advancement of Colored People (NAACP) on the Brown vs. Board of Education case in 1954, Marshall played an integral role in ending school segregation. This case, Vice President for Student Affairs Carl Watton says, “set the stage for the rest of the Civil Rights Movement.” 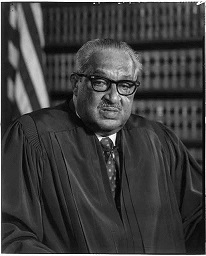 In addition to touting its status as the first degree-granting HBCU, the university is able to boast many other firsts. Eric Webb, Director of Communications, says that the university currently has more than fifty “firsts.” From the first President of Nigeria, to the first African American to hold both an M.D. and a Ph.D., the university is able to claim the title of being “the first” in many areas. Director for Alumni Relations Rita Dibble says that being the first is a motto at the university. “The challenge to our students is to define the areas in which [they are] the first. They walk in here and they are told about Langston Hughes and Thurgood Marshall. We ask them, ‘How will you be the first?’” Dibble said.

Students are taking well to the challenge set forth by the university. Tiana Robb, a sophomore student majoring in nursing, said “[The famous alumni] make us want to look forward to tomorrow. We want to keep the Lincoln legacy going.” 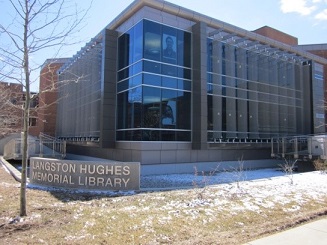 Many of them, Communications Director Eric Webb says, already are the first. “A great portion of our students are first generation college students or first in their high school class. It’s a nice mix of people that are first in their class, first in their family, and we treat you first.”

Students agree with Webb’s claim that the university treats them first. As a small university, many students are drawn to the intimate atmosphere and personalized attention that is available from professors. Robb explains, “It feels like a family. Teachers here want to help you. I found myself here.” Student Courtney Clarke echoed the sentiment of a family feeling, saying, “I wanted to be a name as opposed to a number. All the professors know everyone. There is a family setting here.”

The family community is something that students have enjoyed since the school’s early days. Poet and social activist Langston Hughes, a leader of the Harlem Renaissance, graduated from the university in 1929. Hughes said of the university in a quotation cited by author Arnold Rampersad, “[There is] nothing out here but the school and therefore the place has a spirit of its own, and it makes you feel as though you ‘belonged,’ a feeling new to me because I never seemed to belong anywhere.” 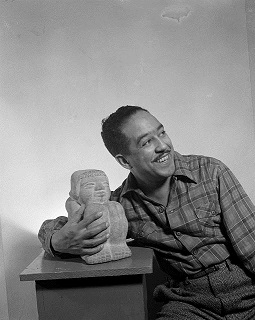 Credit: Gordon Parks/Library of Congress
Poet and social activist Langston Hughes felt a sense of belonging at The Lincoln University.

In its 160th year, The Lincoln University continues to make history today. Its motto originally emphasized the opportunity for freed African Americans to earn an education. Today, the importance of freedom still rings true to students and staff alike. Robb explains, “[You have] a freedom to do what you want to do to better yourself, the freedom to make something of yourself.” The staff has faith that their students will use that freedom to propel the Lincoln legacy forward. Webb says, “These students at Lincoln are going to make an impact. The people here today will be the ones making news tomorrow. It’s history; it’s as basic as that.”