Fritz Lab: Not Just for Chicks

In my will I have left Lehigh University a certain sum of money, to be expended in your discretion. I now intend to revoke that bequest. Yes, I’m going to revoke that bequest, and instead of leaving money for you to spend after I am gone, I’m going to have fun spending it with you (…) you need an up-to-date engineering laboratory and I intend to build one for you. —John Fritz, from his autobiography (1912) 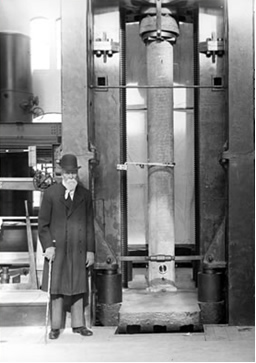 Lehigh University Special Collections
In this photo from 1909 John Fritz stands next to the newly installed Riehle universal testing machine in the Fritz Laboratory.

The Fritz Engineering Laboratory, originally opened in 1910 and then refurbished in the 1950s, is located in Bethlehem, Northampton County, on the campus of Lehigh University. The lab, named after an important figure in Pennsylvania’s iron and steel industry, is a symbol of Lehigh University’s dedication to provide a quality engineering education. The lab also tested several well-known structures that would prove important to American culture, such as the Golden Gate Bridge.

John Fritz, born August 21, 1822 in Chester County, Pennsylvania, was an ambitious man who started his career as a blacksmith and became an innovator in the iron industry. Fritz became an important figure in the iron industry after developing a new technique for making iron railroad rails which was used throughout the United States and England. In 1860, he was hired as the superintendent and chief engineer for Bethlehem Iron Company. At the company, John Fritz collaborated with Asa Packer, the founder of Lehigh Valley Railroad, and developed Bethlehem Iron into one of the nation’s leading manufacturers of iron and steel. Until his retirement in 1892, John Fritz continued to challenge and improve the company.

During his successful career John Fritz received many awards and honors. In 1893, he received the Bessemer Gold Medal from the Iron and Steel Institute of Great Britain. He served as president of the American Institute of Mining Engineers in 1894 and president of the American Society of Mechanical Engineers from 1895 to 1896. Because of his tremendous contributions to the field, he also became known as the “Father of the U.S. Steel Industry.” In 1902, five top engineering institutes, including the American societies for civil, mechanical, and electrical engineers, established the John Fritz Gold Medal to be awarded for notable scientific or industrial achievement. The first medal was awarded to John Fritz on his 80th birthday; other recipients include Thomas Edison, Alfred Nobel, and Orville Wright.

In 1865, Asa Packer founded Lehigh University and appointed John Fritz as a trustee. Although Fritz had no formal education, he supported Lehigh and served as a trustee from 1865 to 1882 and again from 1907 until his death on February 13, 1913. In 1909, Fritz declared that he would build an up-to-date engineering laboratory that was modeled after buildings at Bethlehem Iron Company. Fritz, then 87, supervised the design and construction of the laboratory. Opened in June 1910, the Fritz Engineering Laboratory symbolized Lehigh’s dedication to an excellent engineering education. 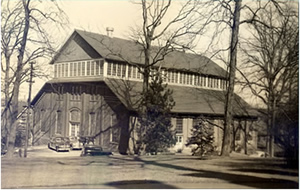 The original Fritz Engineering Laboratory included many state-of-the-art testing machines, including the 800,000-pound Riehle universal testing machine. This machine, the world’s largest at the time, was capable of testing the tension and compression of building components up to 20-feet tall. The machine could test building components by either pulling them apart or crushing them with an increased force;  the strength of the building component could be determined by finding at what force it failed. Fritz lab tested many bridge components including pieces of the George Washington Bridge, the infamous Tacoma Narrows Bridge, and structural pieces used in the Panama Canal and Golden Gate Bridge. Steel for the Golden Gate Bridge was manufactured in Bethlehem, tested at Lehigh University, and then shipped away to be assembled and constructed.

The Fritz Laboratory was also used to test building components made for other purposes. One example involved a mine collapsed in Scranton, Lackawanna County in 1911, causing a cave-in directly below a public school. Mine collapses were frequent in Scranton because a portion of the city was built over mines, so the collapse under the school was certainly not the first. Luckily, the event occurred on a Sunday and no one was injured. The Fritz Laboratory was used to test the supporting power of columns made of various mine materials such as sandstone, slate, wood, and crushed stone. These tests on support columns, which would be placed in mines, were the first made for the mining industry. The Fritz Laboratory was proving valuable.

Beginning in the 1930s, Lehigh’s faculty expressed the need for an updated laboratory. Finally in 1953 a groundbreaking ceremony was held for a seven story addition which would include a new universal testing machine. This five million pound load capacity universal testing machine built by Baldwin-Lima-Hamilton (BLH), was the largest machine of its time. The machine weighed over 450 tons and could test the tension and compression forces of structures up to 40 feet in height. Upon the reopening in 1955, Fritz Laboratory was once again a state-of-the-art testing center. 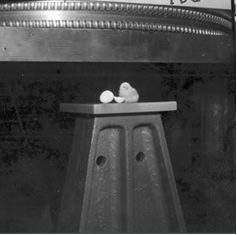 The expanded Fritz Laboratory was dedicated on October 14, 1955, and a variety of demonstrations were conducted to display the new machines. To display the sensitivity of the new BLH testing machine, an egg was cracked (20 to 40 pounds of force), and a live chick hatched unharmed. This chick, named Fritzie, was a living example of the versitility and sensitivity of the new machine

In addition to multiple testing machines, Fritz Lab also included laboratories for soil mechanics, sanitation, structural models, hydraulics, and concrete research. The lab allowed undergraduate and graduate students to study subjects such as reinforced concrete, the modeling of dams, and the strength of novel structural materials. As recorded in Lehigh’s special collection John Fritz and His Legacy, Dr. Allen Astin, director of the National Bureau of Standards, said in 1955 :

“Lehigh University can now offer to the serious students a highly modern training facility with competent research and instructional personnel to guide his studies. In these times of extreme shortages of scientists and engineers, it is highly important that laboratories such as this one provide sufficient training programs.”

The Fritz Engineering Laboratory allowed for new research that was not possible before. In the past because of the small size of most testing machines, scaled down models of building components were tested. Now that Lehigh had the BLH testing machine which could test full size structures,  more accurate data was produced. Many significant reports resulting from research in Fritz Lab have been preserved in Lehigh’s digital archives, which date back to 1921. 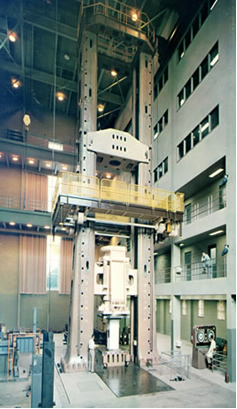 Lehigh University Special Collections
The Baldwin universal testing machine, 76 feet tall including 16 feet below the test floor, was the largest test machine of its kind when it was installed.

In 1992, the original Fritz Laboratory was named as a Civil Engineering Landmark by the American Society of Civil Engineers. The John Fritz Engineering Laboratory also celebrated its 100th anniversary in October of 2009 with a large celebration. During the three day event, there were many speeches and activities to celebrate the legacy of John Fritz and the lab that he provided to Lehigh University. In an article about Fritz Lab’s 100th anniversary, Stephen Pessiki, chair of the Department of Civil and Environmental Engineering said:

“The original Fritz Laboratory was built to confront the civil and industrial challenges we then faced as a nation -- mining, steel production, railways, roads, buildings, bridges, water supply and treatment systems among them. Now, clean water, air, energy, and sustainability are the pressing issues of our day and they’re international in scope. While our challenges have evolved, what remains constant is our focus on education and research that addresses them.”

Fritz Lab, including the Riehle and BLH testing machines, are still used today by students, faculty, and researchers to test the strength of buliding components and gain new knowledge.

As noted in his autobiography, before building the lab John Fritz said “I have long watched the careeres of a number of Lehigh graduates, and I have been impressed by the value of the training they have received at Lehigh.” With the addition of the John Fritz Engineering Laboratory, students could obtain even better training. Fritz Lab has proven valuable not only to the Lehigh community, but also to American culture.