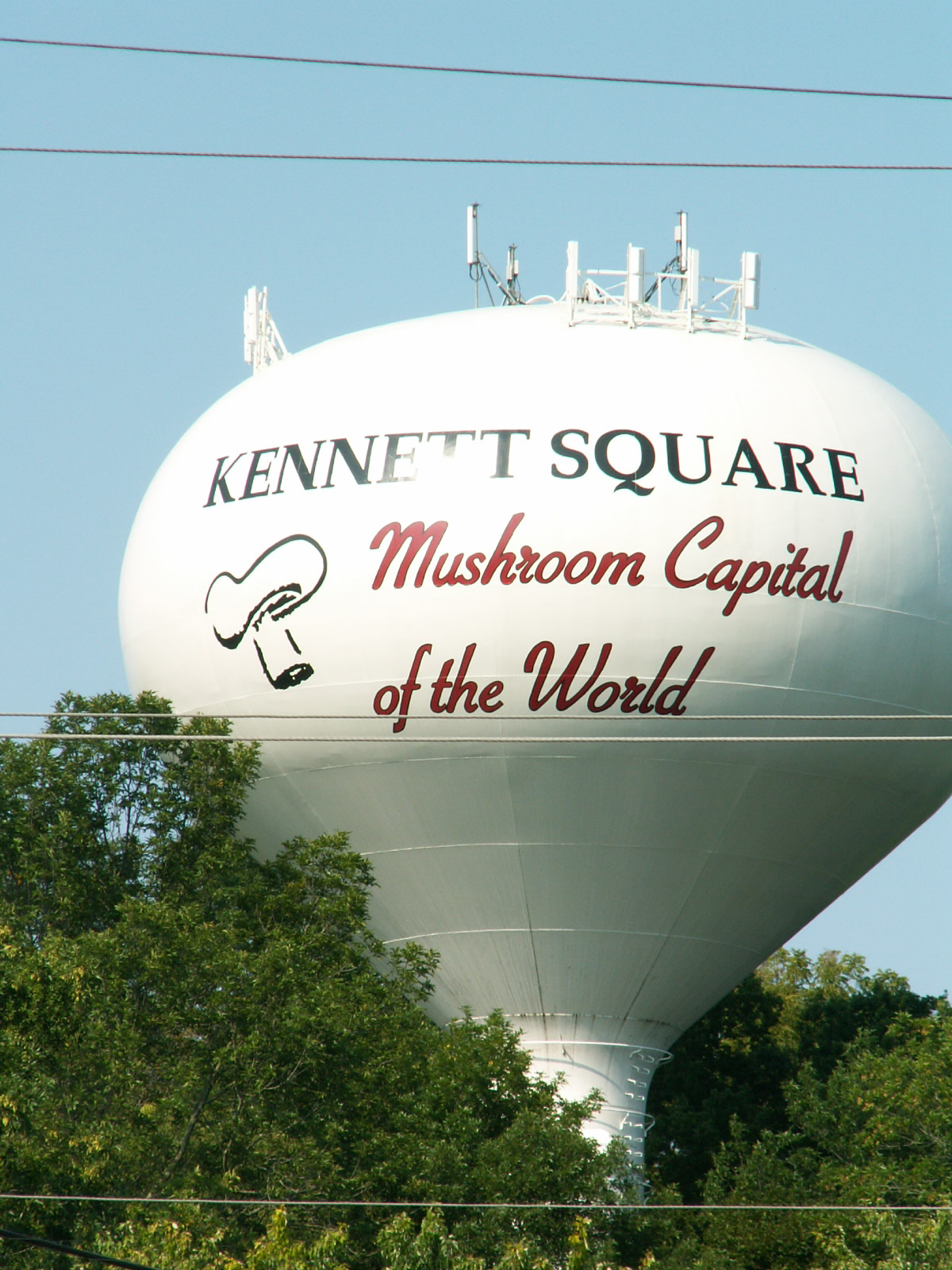 When most people think of agriculture in Pennsylvania, there is a good chance that mushrooms are not the first thing that comes to mind. Yet, perhaps they should be. According to a 2008-2009 mushroom crop report released by the National Agriculture Statistics Service, with regard to Agaricus mushrooms (better known as white button mushrooms), “Pennsylvania accounted for 65 percent of the total volume of sales and second-ranked California contributed 15 percent.” The heart of Pennsylvania’s mushroom industry is located in southern Chester County. Dotted throughout this region are long, windowless, cinderblock buildings, inconspicuous to the untrained eye. It is within these buildings that arrays of delectable edible fungi are grown. If you have ever consumed a mushroom in the United States, it most likely originated in the small bit of southeastern Pennsylvania known as Chester County, where one can smell the distinct, pungent aroma of mushrooms in the air.

Throughout history, mushrooms have been viewed by man as a luxury food item. In fact, as the American Mushroom Institute shows in its film The Mushroom: Quiet Giant of Chester County, ancient Egyptians thought mushrooms had mystical powers that brought health and knowledge to those who consumed them. They were so highly prized that only Pharaohs were allowed to eat them. However, it wouldn’t be until centuries later that civilizations would begin to farm them. According to the Manual of Mushroom Culture, first published in 1935 in West Chester, “the first record of the cultivation of mushrooms was during the reign of Louis XIV (1643-1715) in France.” During this early stage of mushroom cultivation, the majority of mushrooms were farmed in caves created by the quarrying of building stone, or simply picked in the wild. Over time, the practice of growing mushrooms spread around the world and eventually reached America. Eventually, Kennett Square in Chester County would become the “mushroom capital of the world.” Photo Courtesy of Mushroom Council and Mushroominfo.com
By far the most common type of mushroom grown in Pennsylvania is the classic White Button.

John B. Swayne of the Swayne Spawn Company stated in an interview that the Chester County mushroom industry began with his grandfather, William Swayne, who has come to be known as “the father of mushroom growing in the United States.” Initially, William Swayne began his career growing carnations. According to Samuel E. Flammini’s article, The Evolution of the Mushroom Industry in Kennett Square:

Carnations, which are grown on elevated benches, failed to utilize all the space available in the greenhouses in which they were grown. In particular the space directly under the elevated beds had always been a dead loss. In an attempt to utilize this wasted space, Swayne began cultivating mushrooms in the space under the beds.

Swayne achieved such great success with mushroom growing that it wasn’t long before other farmers in the region began to cultivate the fungi. Soon, the farming of mushrooms transformed from a single farmer’s attempt to increase productivity into a lucrative business. Specialized houses constructed from cinderblocks began to replace greenhouses as the primary structures for mushroom cultivation, and these buildings started to pop up all over the county. The mushroom industry had found a new home: Chester County.

Furthermore, while mushroom cultivation has an interesting history, there are substantial advantages of growing the fungus. One of these benefits is the mushroom industry’s “green” nature. Mushrooms require nutrient rich compost to grow, and as reported by the American Mushroom Institute’s webpage on compost, “commercial mushrooms grow in a specially formulated and processed compost made from wheat straw, hay, corn cobs, cotton seed hulls, gypsum, and chicken manure.” In effect, mushrooms grow in the waste produced by a number of Pennsylvania’s agricultural industries. This quality is highly beneficial because agricultural waste, which otherwise might go unused and contribute to the contamination of water, can be sold or given to mushroom producers to be reused.

Even after its use, compost used for mushroom cultivation continues to be of great value. The spent mushroom substrate (SMS) still contains high levels of nutrients, and according to the film The Mushroom: Quiet Giant of Chester County, has been shown to increase crop yields when spread over fields of corn. Moreover, as stated in research conducted by the University of Sheffield (England), and in accord with findings published in the book Mushroom Cultivation, spent mushroom substrate “consists of fibrous compost substrate and a wet casing layer used during mushroom production. In the form of pellets, these materials become more homogeneous, easily stored and transported, and suitable for use in power plants or gasifiers.” This is a prime example of the mushroom growing process’ cyclical nature, and these findings only further the belief that mushroom cultivation can be summed up by three words: recycle, renew, and re-use.

What’s more, not only do mushrooms promote a “greener” growing process, but they are a most healthy dining option. According to the book Commercial Mushroom Growing, “The vitamin content of mushrooms is exceptionally high. Mushrooms are a better source of Niacin, Riboflavin, and vitamin C than any single vegetable.” As the nation and the world becomes more conscious of what it eats and the healthy eating craze spreads, Pennsylvania and the mushroom industry may stand to benefit. If properly promoted as a health food by the Pennsylvania mushroom industry, the state could realize an increase in demand, stimulating the economy and providing jobs.

The mushroom industry offers numerous employment opportunities to the state’s unskilled workforce. The majority of workers are unskilled immigrants, many of whom come from Mexico. According to the article “A Mexican Migration,” “In Chester County, the Mexican population doubled to more than 10,000 between 2002 and 2005, according to the data. The Mexican community there, the largest outside Philadelphia, accounted for more than half of the county’s Latinos.” The large scale migration of Mexican immigrants to Chester County is a phenomenon that can largely be accounted for by the demand for labor in the mushroom industry.

In addition to encouraging recycling, renewing and reusing mushroom products and providing jobs, mushrooms are fun! There is an annual Mushroom Festival that takes places every year in Kennett Square in southern Chester County. According to its website, the “mission of the Mushroom Festival is to promote the mushroom, educate consumers about the health benefits of mushrooms and to promote tourism in southern Chester county, all while financially supporting local and regional charities through a grant process.” The Festival started in 1985 as a small one-day, one-block-long affair to celebrate the county’s number one crop. However, twenty-five years later, the Festival “stretches more than half a mile” and takes place over two days. The Festival features an amateur Fresh Mushroom Soup Cook-Off in which contestants must prepare a soup showcasing mushrooms, a community parade, an antique and classic car show, and a 5-kilometer run/walk that supports breast cancer research through City of Hope. There are also various culinary events, including cooking demonstrations with regional chefs, mushroom ice cream tastings, mushroom growing exhibits, and many vendors selling mushroom-related items.

Moreover, the Mushroom Festival is “an all-volunteer organization,” and gives money back to the community by providing scholarships to local high school students, and distributing proceeds to various philanthropic groups and organizations throughout southern Chester County. Additionally, according to its website, the Mushroom Festival was voted one of the top ten festivals in Pennsylvania by Travelocity and has been featured on the Food Network’s All American Festivals show.

The cultivation of mushrooms in Chester County, Pennsylvania, is a practice steeped in history. The Pennsylvania mushroom industry’s humble origins have given way to the state’s largest and most lucrative agricultural practice, bringing in hundreds of millions of dollars in revenue. The mushroom industry’s impact on southern Chester County has been vast, including economic, environmental, and social change. Moreover, it promotes a sense of community with the annual Mushroom Festival. The fungus among us is certainly an important part of Chester County!

The Center wishes to thank the Mushroom Council and the Mushroom Festival for their assistance in illustrating this article.