Shabbir Malik
York's Fair is the oldest in America.

Stomachs grumble at the tempting stands of food, Funnel Cakes, Gyros, and Fried Cookies. Children scream as rides toss them in gravity defying arcs, but always dropping them safely to the ground. The game vendor with the funny teeth yells so fast it seems like he is not even speaking English, "Step right up! Win your honey a bunny! Step right up!" The sights and sounds are a mix of jumbled noise with a vortex of bright colors. This combination of fun happens every year at The York Fair, "America's First Fair."

The York Fair was founded in 1765, 11 years before the country was even formed. Said to be the oldest fair in the country, thousands of people from across the United States come to enjoy the 88 acres of amusement. It is not uncommon to see residents from Maryland, New Jersey and New York come to York, Pennsylvania to enjoy the Fair, said Terry Lehr, director. In 2005, 613,255 people walked through the gates of the fair, Wendi Himmelright of the York Dispatch wrote. The average has stayed about 600,000 the past two years. The York Fairgrounds' website said that Thomas Penn, son of William Penn, granted the charter to allow the fair to begin. The early years of the fair were said to be, "The liveliest days of the whole year."

The fair started out as a two-day agricultural fair held at what is known today as Penn Park in York County. It continued through the American Revolution and the War of 1812, with soldiers camping at the fairgrounds. Over the years, the fair has grown in size, outgrowing its location many times. In 1853, The York County Agricultural Society made it a three-day event and moved the location to the east side of the city. Once again in 1888, having grown too big, the York Fair was no longer suited to the east side of town. It was moved to its current location, where it has stayed for more than 100 years. It is currently situated off Route 74. There were only two known times when the Fair did not take place, Lehr said. During the Civil War, the Fair was closed for four years. The Fairgrounds were used to set up temporary hospitals after the killings at Fort Sumter and by 1862 the Secretary of War had made the hospitals permanent, preventing the Fair from taking place. The second time was in 1918, when the great influenza pandemic hit York, killing 166 people.

Nearly a century ago, the York Fair would stay open late only once a week, but in recent years the music can still be heard well into the night ... every night. In the 1930s, other attractions were added such as "freak shows," automobile shows, and various other popular attractions. It went from being an agricultural event to a mini-amusement park. Yet, "people come here to learn about agriculture number one, and also come to have a good time," Lehr said. The Fair, of course, has agricultural components such as livestock, ducklings, fruits and vegetables. It also has displays of antiques, needle work, and local school children's work. A Fair would not be complete without rides, of which it has plenty. Lehr said that research shows the main reason people come, however, is of the food; "If it's edible, we probably cook and serve it here." 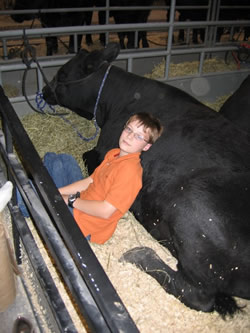 Jo Druck, 2007
A youngster sits with his show cattle at the Fair.

Operating for more than a century, it is not uncommon for several generations to be enthralled by the fair. It lasts for 10 fun-filled days starting the first Friday after Labor Day and ending the second Sunday. "Coming to the fair sort of gets in your blood, you just enjoy doing it. You bring your children and they bring their children," Lehr said. Each member sharing his or her favorite memory, each distinctly different, but shared at the same place: The York Fair.

The biggest concern regarding attendance is always the weather. A primarily outdoor event, a rainy day can drastically cut profits and attendance. Gas prices became a concern after 9/11 with the economic spiral downward. Lehr said that Fair officials acknowledged the pros and cons of high gas prices. Although the rate at which residents from out-of-town came to the Fair dropped, the local residents opted to stay home instead of driving to vacation spots elsewhere. In an effort to attract more local residents, a campaign strategy was implemented in 2008. Billboards were put up in the area saying, "More Smiles to the Gallon."

Most students rejoice on half-days, and going to the York Fair for free is no exception! Lehr can remember as far back at the 1940s that county schools had half-days where afternoons are jam-packed with screaming students, hurrying to catch every ride at least twice before heading home for the evening. For those coming from out of town, the biggest highlight is the concerts. Previous performers have included Britney Spears, Bob Hope, Poison, Gretchen Wilson, ZZ Top, Daughtry, Breaking Benjamin, Brooks and Dunn and Larry the Cable Guy, Lehr said.

With hundreds of vendors, food stands, exhibits, and rides it's easy to realize that planning for the Fair is a year-round process. "Let's put it this way, the day after the fair is over, we start planning for next year," Lehr said. Representatives must plan for the performances, stands, and attractions for the following year. During the course of the year, more than 160 attractions grace the Fairgrounds. In 2003, the Toyota Arena was built, a rentable space that has celebrated numerous graduations and even hosted a political rally for President George W. Bush.

Whatever the reason for coming to the Fair, may it be the plethora of food, the rides, the exhibits, or just to enjoy an evening away from home, the York Fair provides the community with it. With more than 200 years of experience, it knows how to show people a good time.