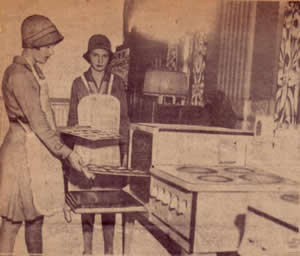 Girl Scouts of the USA
In November 1932, Virginia Marley and Mildred Meyer, both Girl Scouts from the greater Philadelphia area, used the demonstration ovens at the Philadelphia Gas and Electric Company to bake the now-famous cookies.

What do you get when you combine: 1 cup butter, 1 cup sugar, 2 eggs, 2 tablespoons milk, 1 teaspoon vanilla, 2 cups flour, 1 teaspoon salt and 2 teaspoons baking powder? You get the original Girl Scout cookie recipe, which makes about 6-7 dozen trefoil cookies. What started as a single batch of cookie dough mothers made with their daughters to teach cooking basics has become one of the most well-known fundraising and educational enrichment programs around the nation, featuring with eight varieties and selling more than an estimated 150 million boxes each year. Everyone has their favorite kind, whether it is a box of "Thin Mints," "Samoas," "Tagalongs" or "Do-Si-Dos." These cookie flavors are well-known across the country as the famous Girl Scout cookie brand. Across the country from October to March, local Girl Scout troops go door-to-door and stand outside stores selling these iconic and delicious treats.

The history of Girl Scout cookies dates back nearly as far as the Girl Scout organization itself does. In March 1912, Juliette Gordon Low organized the first Girl Scout meeting in Savannah, Georgia. She had met with Sir Robert Baden-Powell, founder of the Boy Scouts and Girl Guides organizations in Britain, and wanted to give local adolescent girls the opportunity to develop physically, mentally, and spiritually. To encourage youth participation in community events, in the first year of the Girl Scouts program, Low planned several outings, which included hiking, playing basketball, going on camping trips, learning how to tell time by the stars, and studying first aid. Through her role as troop leader, she encouraged girls to prepare not only for traditional homemaking, but also for possible careers and civil service functions outside the home.

As the Girl Scout organization started to expand, troop members began to sell homemade cookies to raise funds for troop activities. The first recorded organized cookie sale was organized by the Mistletoe Troop in Muskogee, Oklahoma, which baked cookies and sold them in its high school cafeteria as a service project in December 1917. However, a national program was established in July 1922 when The American Girl magazine, published by Girl Scout national headquarters, featured an article with a cookie recipe. The article was distributed to approximately 2,000 Girl Scouts and there were encouraged to make the cookies as a group and sell them to their local communities for 25 or 30 cents per dozen. Until the mid-1930s, Girl Scouts around country would bake the simple sugar cookies with their mothers, package them in wax paper bags sealed with a sticker, and sell door to door.

Girl Scouts of the USA
Although the recipe for Girl Scout cookies has remained practically the same since the 1930s, the packaging has changed to match marketing trends of the era.

While Girl Scout cookies are nationally recognized, their history has specific ties to the Keystone State. In 1932, the Girl Scouts of Greater Philadelphia Council became the first group to sell the cookies commercially—they sold them out of the city's gas and electric company windows for only 23 cents per box of 44 cookies. It started in 1932 when a Philadelphia Girl Scout wanted to bake cookies to benefit children's nurseries and orphanages. Her parents worked for the Philadelphia Gas and Electric Company and on November 12, 1932, the ambitious Girl Scout used the PGE's demonstration ovens to bake cookies for the United Campaign efforts. As the smell drifted out onto Arch Street, people inquired about how to purchase the cookies. The Girl Scouts agreed to sell to the public whatever extra cookies remained from the nursery project. In the end, they ended up selling a lot of cookies—more than they originally intended to bake for the service organization—and the next year the Philadelphia Gas and Electric Company asked the Girl Scouts to come bake again.

Then in 1934, the Philadelphia-area Council leaders approached Keebler-Wyl Baking Company, a Philadelphia baking company on North 22nd Street, to bake and package vanilla Girl Scout Cookies in the trefoil shape. They agreed, marking the first time that Girl Scout cookies were baked by someone other than Girl Scouts and their mothers. Given the success of Girl Scout cookies in Philadelphia the previous year, rather than baking cookies for the United Campaign effort, the troop decided to donate the proceeds from the cookie sale to raise money for its Camp Indian Run in Glenmoore, Chester County, which offered summer recreation activities for Girl Scouts. However, commercially baking cookies turned out to be successful—they sold 100,000 boxes in December of that year—and soon other nearby troops asked to be included in their bakery order. Keebler-Wyl became the official national baker of Girl Scout cookies in 1936. Although the Keebler-Wyl Bakery no longer bakes the Girl Scout cookies each year, they have become famous in their own right—nowadays the Keebler brand is well-known for their own elf fudge cookies, along with other products, such as Famous Amos cookies and Cheez-It crackers. 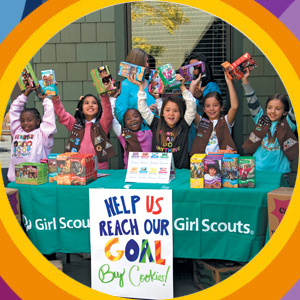 Girl Scouts of the USA
For Girl Scouts, selling the cookies isn't just about providing people with tasty treats; rather, the cookie sales are designed to teach members practical business skills.

Seeing the success of these two mid-Atlantic troops, in 1936, the national Girl Scout organization began the process to license the first commercial baker to produce cookies that would be sold by the Girl Scout troops. Troops would have local bakers produce and package the cookies for them—the Girl Scouts stopped baking the cookies themselves, but turned to marketing and selling the cookies. By 1937, enthusiasm for Girl Scout Cookies had spread nationwide, with more than 125 Girl Scout troops holding cookie sales. These sales became an annual event for troops into the next decade. The success of the first commercial sale is also significance since it took place during the Great Depression when America's finances were stretched tight and few people had money to spend on splurges. However, the sales helped Girl Scouts develop their marketing and business potential and raise funds for their troop, and it is said that the sales of the iconic cookies boosted morale.

Although the Girl Scouts had to temporarily switch to selling calendars to raise money during World War II due to sugar, flour, and butter shortages, they resumed the sales when the war ended. By 1948, there were 29 bakeries across the country that were licensed to make Girl Scout Cookies. The successful sale of Girl Scout Cookies continued into the 1950s. The original Girl Scout cookie was a sugar cookie, but in 1951, the selection was expanded to include a vanilla sandwich cookie, a shortbread cookie and a Chocolate Mint cookie (now known as "Thin Mints"). The cookies' popularity increased and by 1956, they offered an additional chocolate-based sandwich cookie. Also, some bakeries offered an optional flavor based on local favorites and tastes.

With the post-war creation of the suburbs, Girl Scout Cookies began to be sold by troop members outside shopping malls. As Girl Scout membership increased during the 1960s, as the Baby Boomer generation joined Girl Scout troops across the country, the cookie volume also increased significantly. To keep up with this demand, 14 more bakeries were license to make the popular dessert. Also, in 1960, bakers first began wrapping Girl Scout Cookie boxes in printed aluminum foil or cellophane to protect the cookies and preserve their freshness. This extended the season of Girl Scout cookies and allowed troops to sell them throughout the fall, winter and spring seasons.

To lower the cost of producing the cookies, as well as ensure uniform quality, packaging, and distribution, in 1978, the licensing process was redone, giving rights to the cookie to only four bakeries nationwide. Also, the national organization, Girl Scouts of the USA, supplied licensed bakers with a standard cookie package layout and pictures. Although the presentation of the cookies had historically been a task for the individual troop, beginning in the late 1970s, all Girl Scout Cookie boxes featured the same design, including active Girl Scouts having fun, and the Girl Scout logo. The new design not only sold the cookies, but encouraged other young girls to join local troops. By the early 1980s, the licensed bakers produced a maximum of seven varieties of cookies, including three mandatory flavors: "Thin Mint," Sandwich, and Shortbread.

Girl Scouts of the USA
Although there are only eight cookie varieties, some cookies have two names since there are two licensed bakeries. Samoas are also known as Caramel de Lites and Trefoils are also called Shortbread cookies.

Beginning in the 1990s, ABC/Interbake and Little Brownie Bakers were given the exclusive license to bake Girl Scout cookies. There are now eight varieties available: "Thin Mints," which are mint-flavored cookie covered in dark chocolate, were one of the original flavor offerings and are the most popular cookie today; "Do-Si-Dos," or Peanut Butter Sandwich, is a yummy oatmeal cookie on top and bottom sandwiched between a layer of peanut butter cream; "Trefoils," or Shortbread, were also an original flavor known for their trefoil shape; "Tagalongs," or Peanut Butter Patties, are the peanut butter cookies covered in milk chocolate; "Samoas," or Caramel deLites, feature a simple shortbread cookie in a doughnut shape that are covered in caramel, coconut and chocolate; "Thanks-A-Lot" is a shortbread cookie with a layer of fudge on the bottom and marked on top with "Thank You" in English, French, Chinese, Swahili or Spanish; "Lemon Chalet Cremes," are a cinnamon cookie with the design of Our Chalet in Switzerland, a beloved Girl Scout World Center, on top; and "Lemonades" were first created in 2006 as the sandwich cookie with lemon filling. Several of the cookies have two names—one for ABC Bakers and another for Little Brownie Bakers—but the recipe remains the same for both. Although regional offices can pick which flavors are sold by their local troops, there are three mandatory ones: "Thin Mints," "Do-Si-Dos" and "Trefoils." To match current health trends, the basic chocolate chip cookie is now available in low fat and sugar-free options.

By 1981, the national headquarters of Girl Scouts, Inc. created official age-appropriate awards for Brownie, Junior, Cadette and Senior Girl Scouts for participating in cookie activities, including an annual Girl Scout Cookie Activity Pin, with requirements featured in an activity guide. This marked the first time Girl Scouts could receive a merit badge for selling cookies, yet shows the significance placed on not just raising funds for the troop, but also having Girl Scouts learn life lessons, such as basic business and marketing concepts.

ExplorePAHistory.com
In recognition of the cultural and historical significance of Girl Scout cookies, the — placed a marker outside the original Philadelphia Gas and Electric Company location.

Despite a fast-food culture in America today, Girl Scout cookie sales are still booming in the 21st century. To kick-off the sales, some troops and regional areas plan a "Cookie University," where the girls learn how to sell cookies safely, how to handle money, and other business skills. Generally speaking, each troop has a month-long pre-sale time, followed by a delivery week. Following that, troops can arrange to do more door-to-door sales or sales in front of local businesses. National organizers also try to stagger sales throughout a state to limit direct competition and to provide rolling availability of cookies for customers. Some troops give customers the option of purchasing an additional box of Girl Scout cookies to send to servicemen and women stationed overseas. New in the 2009 cookie season is "Dulce de Leche" flavor, which was inspired by the Latin American dessert and have a light cookie with a milk caramel coating on top.

From a small in-home cookie baking project, Girl Scout cookies have become one of the most widely known fundraising program. Nowadays, the program doesn't just produce yummy cookies, but it builds young character in Girl Scouts across the county.