Go With the Flow: The Mixed Flow Water Turbine 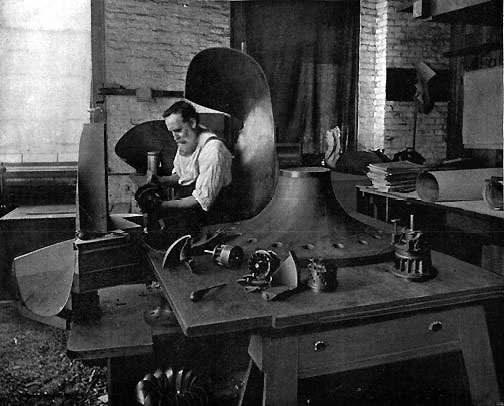 Picturesque Hampden, Part II West, 1892
John B. McCormick worked hard on his invention in his shop in Hampden, MA.

The inventor John B. McCormick’s tombstone reads: “The first to tread an unknown path or a new truth to paid claim is by the world’s dual realm of thought pronounced eccentric or insane.” He may not have been insane or eccentric, but he was definitely the first to tread a new path. Technology and the world are always changing around us, and it is rare to find something that was designed over 100 years ago still in use today. McCormick defied the odds though with his 1899 design for the mixed-flow water turbine, a revolutionary idea in turbine efficiency.

John B. McCormick was “Going Green” before the term even existed, dedicating his life to inventing more efficient ways to create power for industry. He started with basic improvements to the water wheel, the simplest type of water turbine, and one of the oldest forms of power and irrigation, dating back to the ancient Egyptians. The water wheel utilizes falling or flowing water to turn a large wheel centered on a shaft. This shaft then spins and, in McCormick’s time, would power a set of gears in a mill. The water is caught by either blades or buckets and nothing but the natural force (potential energy) of water is used to create power. 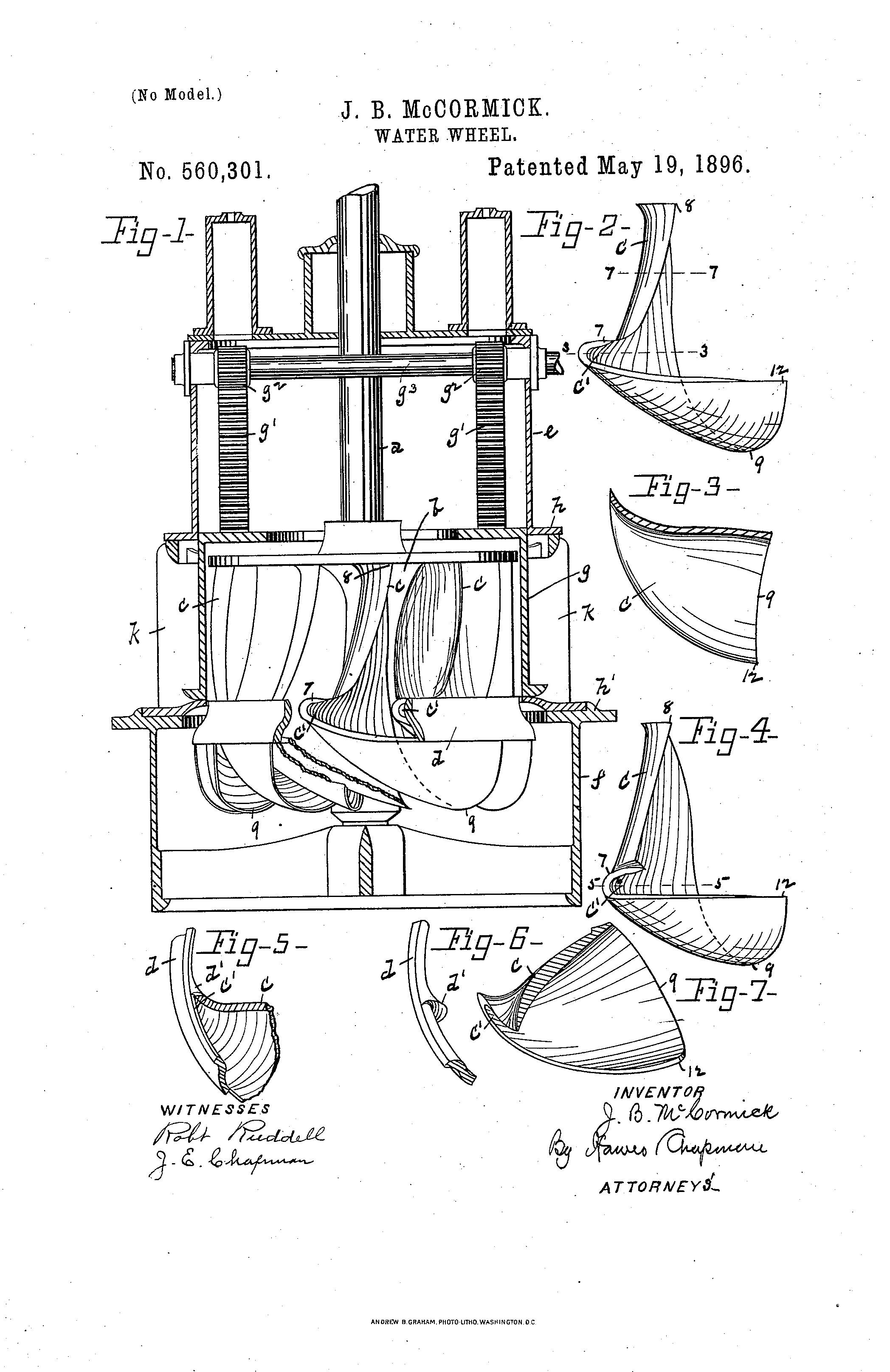 The turbine style water wheel that McCormick invented in 1892 was just one of a few improvements he made to the water wheel before designing the mixed-flow style turbine in 1899. A turbine is a machine that uses the kinetic (moving) energy from a flowing gas or liquid such as steam or water to turn a series of blades or fans. This process converts kinetic energy to mechanical energy. In a power plant, a turbine is used to turn a conducting wire in a generator to produce power. A turbine is based on a principle made famous by physicist Isaac Newton. His third law of motion states that for every action there is an equal and opposite reaction. In a turbine, the action is the flowing fluid and the reaction is the turning blades.

The mixed-flow turbine design incorporates designs from two different style turbines, hence the name mixed-flow. This type of turbine combines the designs of radial turbines and axial turbines. A radial turbine is a turbine in which the fluid enters in a tangential direction (A tangent is a straight line that follows either left or right from the top of a circle) and spirals much like when the water is emptied down a drain or a toilet. Imagine as the water spirals it pushes the blades of a fan in the same direction as the water and you have the basic idea of a radial turbine. On the other hand, an axial turbine is a turbine that utilizes a fluid flowing in a perpendicular direction to the rotor blades, instead of flowing in the same direction. The most common type of axial turbine is the windmill. In a windmill, the rotor blades are designed to catch the wind as it blows through the rotor blades. Thanks to John B. McCormick we have a turbine that combines two turbine designs into a single turbine and hence, increases the efficiency of the system. Energy efficiency is a quickly growing topic in America and around the world, and any invention that increases the energy efficiency of a system is invaluable.

The efficiency of an axial turbine is around 70%-75%. This is because there is space between the rotor blades for fluid to pass through. The only way for all of the air blowing at a windmill to be captured was if the windmill were a complete, solid circle. At the same time, if the windmill were a complete, solid circle there would be no way for the turbine to catch the air in a useful way, and because of this it is impossible to have an axial turbine with 100% efficiency. 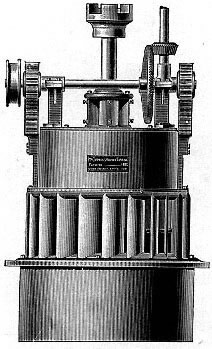 The efficiency of a radial turbine is around 80%. The efficiency here is not 100% because of a phenomenon called “secondary flow.” This is when fluid on the edges of the blades escapes the blades and stops contributing to the turning of the fan. Going back to the toilet example, when you flush a toilet, the water on the very outside of the bowl sometimes doesn’t spin in perfect unison with the rest of the water. This is the secondary flow of the toilet water. Now if you can imagine the fan in the toilet again, the more water that is in the secondary flow, the less water that is contributing to turning the fan, therefore decreasing efficiency.

When both of these systems are combined, the efficiency increases to about 85%-90%. This is because in a mixed-flow system the fluid enters the turbine as with a radial turbine, but the secondary flow is minimized and the efficiency of the axial part of the turbine is maximized with a forced fluid-flow. This may not seem like a big increase, but when applied in an industrial setting where millions of dollars are spent on energy, even a small efficiency increase can equate to thousands or even millions of dollars in saved revenue.

McCormick’s quest for a better way to produce energy started in Armagh, Indiana County. The machine shop where he did most of his work was called Brown, Son and Company, and this is where McCormick started his studies in 1868. He started with very basic tools and tasks, working to improve the efficiency of the sawmill water wheel in Armagh, a project that seems trivial compared to the mixed-flow turbine. He died in 1924 in Smicksburg, Indiana County, with 6 turbine/water wheel related patents. McCormick left a legacy that only added to the already rich history of Indiana County.

Indiana County’s first industry was the manufacture of salt by way of saltwater well. In fact, the town in Indiana County called Saltsburg was named just for this reason. Mining for bituminous coal started in 1795 and iron furnaces were built in the 1830s and 1840s. Indiana County was a center for industry in the 19th century and into the 20th century and this was well-aided by the improvements in energy production that were brought about by John B. McCormick. 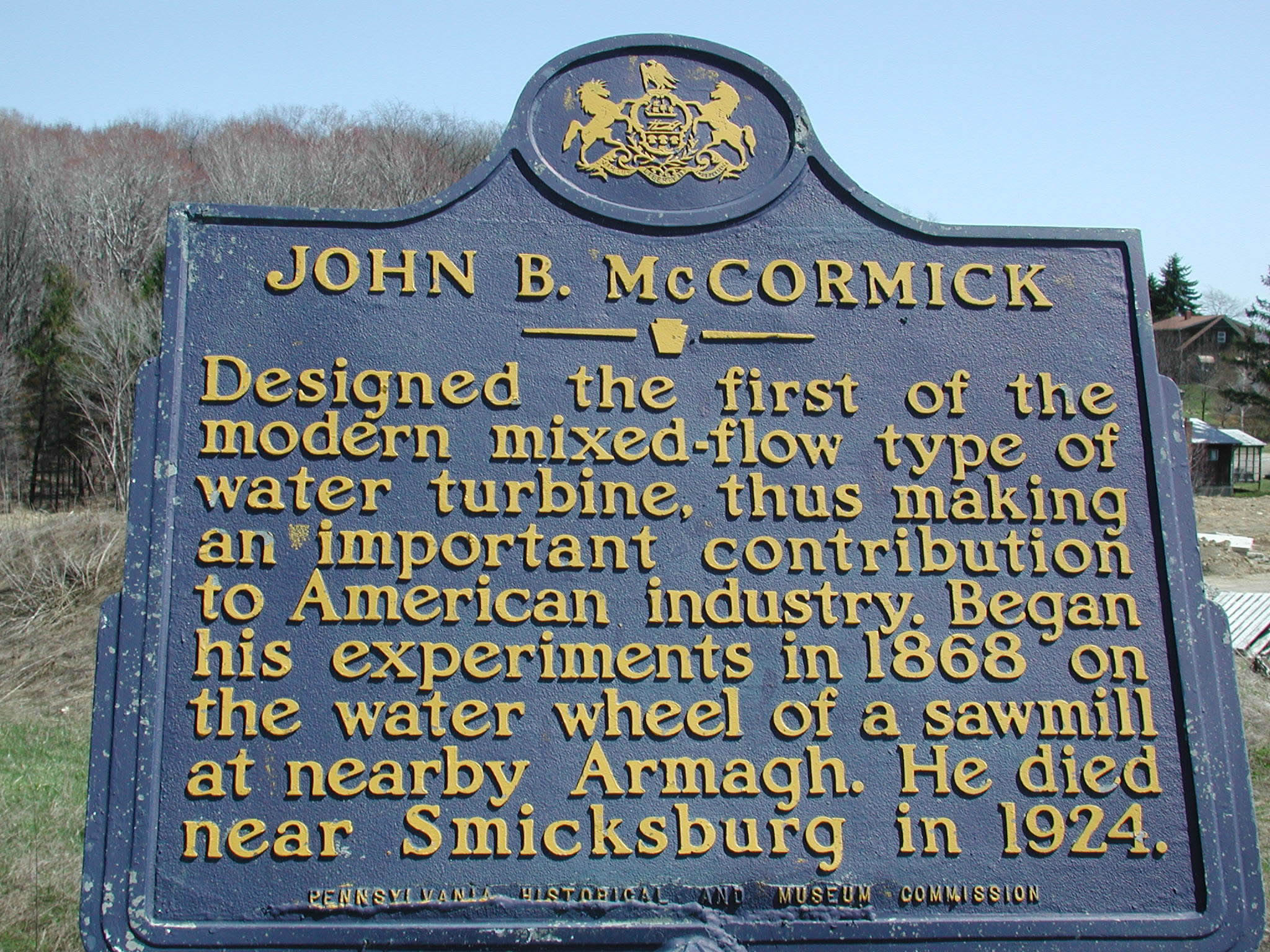 The mixed-flow style turbine was such a good design that it is still in use today. Modern car turbochargers use mixed-flow style air intake systems so they can maximize the amount of air getting to the engine cylinders. More air means more of an explosion in the engine compartment, which in turn creates more power output. As the engine revs, it requires more air at a quicker rate. The turbocharger helps to make up this need for more air because the higher the number of engine revolutions, the higher the number of times the fan in the turbocharger spins. The turbocharger is a key component in many classes of auto racing, even though it employs a design that is astonishingly over 100 years old.

John B. McCormick left a lasting impression on Indiana County’s, Pennsylvania’s, and America’s industry and history. His contributions to the field of energy production and energy efficiency were unprecedented, and very similar turbine designs are still in use today. Energy efficiency is becoming more and more a part of industry every day, and new improvements are being made every day. But we would be nowhere if it had not been for the ground work laid by Indiana County’s own John B. McCormick.

The Center wishes to thank the Historical and Genealogical Society of Indiana County for its help illustrating this article.