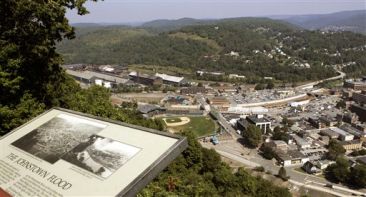 On May 31, 1889 disaster struck Johnstown, Pennsylvania when a man-made dam gave way on a mountain top, fourteen miles above the city, spilling the more than twenty-five millions tons of water from the lake. In 1889, Johnstown was an important booming city in America. It was, at the time, the largest steel-producing city in the nation. The iron and steel factories brought immigrants from all over to the city. Immigrants included Germans, Swedish, Welsh, Scottish, and Hungarians just to name a few. Johnstown is located just outside of Pittsburgh, where the elite business executives lived, however. There was always said to be a clash between the Johnstown immigrant residents and the elite business executives of Pittsburgh.

The man-made dam, which was constructed to supply water to a busy canal that ran between Johnstown and Pittsburgh, was abandoned in the early 1850s when railroads began to replace the travel of the canal. After twenty-five years of abandonment, in 1879, some of the wealthiest men in America bought the five-hundred acre lake and seventy acres of land surrounding it. Pittsburg industrialists, Andrew Carnegie, Andrew Mellon and Henry Frick transformed the land and lake into a resort. They named their resort the South Fork Fishing and Hunting Club, which was occupied by the areas wealthiest people.

Many knew the dam was in bad condition and had warned the owners of the South Fork Club. One of the presidents of a mill from the Cambria Iron Mills was said to have sent an engineer to check the dam; the engineer reported a small break in the dam that was never properly repaired. This confirmed that any heavy periods of rain that would fill the lake to its capacity would likely cause the dam to break. According to Sandler, the president of the mill informed the owners of South Fork Club of the danger of the dam who later responded, "...you and your people are in no danger from our enterprise."

Johnstown is a low-lying location and was used to minor flooding during rains. However, in May of 1889 unusually heavy rains fell on the Johnstown area. Eleven inches of rain had fallen on the area by the end of May. On May 30, eight more inches fell. The streets of Johnstown were beginning to flood. Then at 3:30 p.m. on May 31, 1889 the dam broke sending more than twenty-five million tons of water down the mountain towards Johnstown. A forty-foot wall of water hit East Conemaugh first. Next Woodvale, the area of the Cambria Iron Mills, was hit. Lastly, Johnstown was hit and flooded. By the time the water hit Johnstown it carried everything from houses, trains, bridges and people. The water stopped when it hit the Johnstown's stone railroad bridge, and there a thirty-foot mound of debris pilled up. People climbed on top of the pile for safety only to have the mound catch on fire around 6 p.m. To this day, no one knows what caused the fire, but people speculate that it may have been caused by oil rom a ruptured railroad tank car. 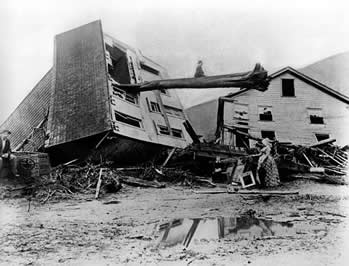 AP Archive
Carnage in the aftermath of the Flood.

The death toll hit 2,209 with one out of three bodies found being unidentifiable. More than ninety-nine families had been completely killed. According to nps.gov, "of the 2,209 people that died 900 bodies were never found." Within six months a new Johnstown was built; the city had support from people all over the country. However, newspapers and people from all over pointed fingers at the South Fork Club for the cause of this disaster, causing the South Fork Club to shut down. In 1891, the land on which the resort stood was auctioned off. Despite the auction and the closing of the Club, the Club members faced no legal penalty. Historian David McCullough recounts that "Not a nickel was ever collected through damange suits from the South Fork Fishing and Hunting Club or from any of its members."