The Great Wall of Pennsylvania 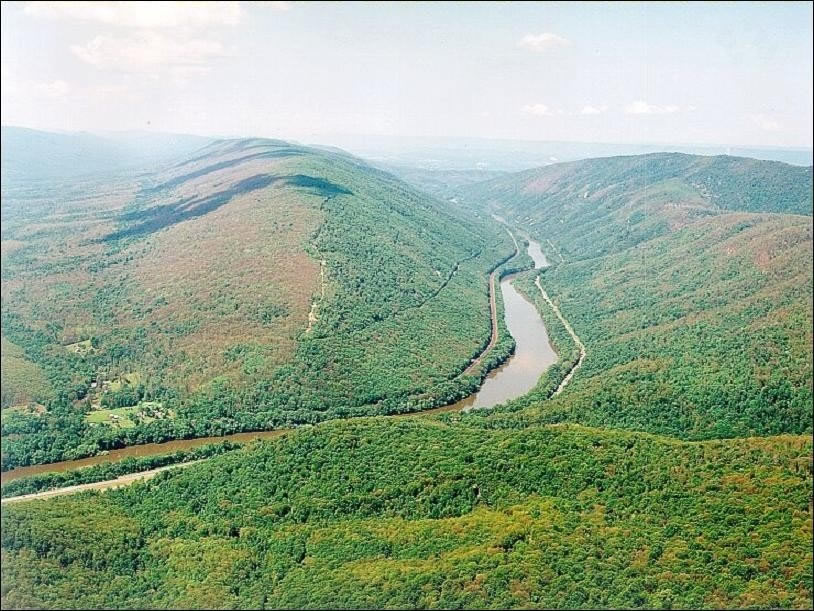 EADS Group / gtstech
An aerial view of the Lewistown Narrows shows the Juniata River and the narrow band of U.S. Hwy 322 to its right.

Squeezed between Shade Mountain and the Juniata River, the Lewistown Narrows was formerly named one of the ten deadliest stretches of highway in the country. This unsafe, winding, and twisting two-lane roadway, with an alternating center passing lane on Route 22/322 in Mifflin and Juniata counties, bottlenecked and forced drivers from four lanes to two between the mountain and the river. Between 1980 and 2000, 20 automobile accidents resulted in deaths while traveling through the Narrows. As the main road between the State College area and Harrisburg, 20,000 people traveled the road daily, and up to 55,000 per day during peak times, including holidays and home football games at Penn State University. The number of individuals involved in automobile accidents was shocking. Something had to be done to make the roadway safer for drivers, and widening the Lewistown Narrows was the ultimate solution. The once ‘most dangerous’ section was transformed to a local landmark and engineering marvel. Located near Lewistown, Pennsylvania, the Lewistown Narrows incorporates the longest mechanically stabilized earth (MSE) wall in the United States, preserves the Pennsylvania Canal, and includes fossils and the remains of prehistoric organic material. W.T. Purvience / Wikimedia
Before the days of automobiles, trains plied their way through the narrows.

Dating back three decades, efforts have been made to improve the roadway. Stability was vital, and engineers struggled to produce a design that maintained, and would continue to maintain, roadway stability. Cost and restricted space were also problems that delayed the project for years. Complicated by the already tight space and the talus, or loose rock, slope of Shade Mountain, the design of the new roadway was challenging. Engineers had to consider ways to expand the roadway while maintaining the slope’s stability during and after construction. To minimize excavation into the foot of the mountain and to preserve the historic Pennsylvania Canal, the final design was a bifurcated, or two-level, divided highway. This elevated three miles of the westbound lanes above the eastbound.

With the Lewistown Narrows being a vital link connecting Harrisburg and Hershey to the Lewistown and State College regions, this transformation had to be completed while the roadway remained open. With few alternative routes and official detours of 30 to 60 miles, it was crucial that the roadway continue to be accessible while simultaneously transforming a two-lane roadway to a safe and modern four-lane limited access highway. After years of planning and efforts to improve the Lewistown Narrows, the final design was complete. The project that was once a dream became a reality in December of 2002. 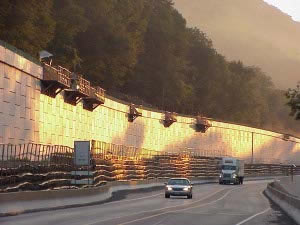 Provided courtesy of Erdman Anthony.
The early completion of the engineering challenge that was the Lewistown Narrows project brought unanticipated relief to travelers and a major award to contractor Erdman Anthony.

The Lewistown Narrows project included both challenges and successes. According to Marla Fannin, community relations coordinator of PennDOT, District 2, some of the biggest challenges “were tight access, an accelerated schedule, year-round, and sometimes around-the-clock, construction, and the environmental constraints of building the causeway in the Juniata River.” Karen Shutty, the design manager for The EADS Group stated, “the talus rock formation and underlying layer of slippery clay prevented us from digging into the mountain,” which was another major challenge for the principal designer of the roadway. Finally the biggest hurdle, with an impressive end result, was the geology and the preservation of the historic Pennsylvania Canal. 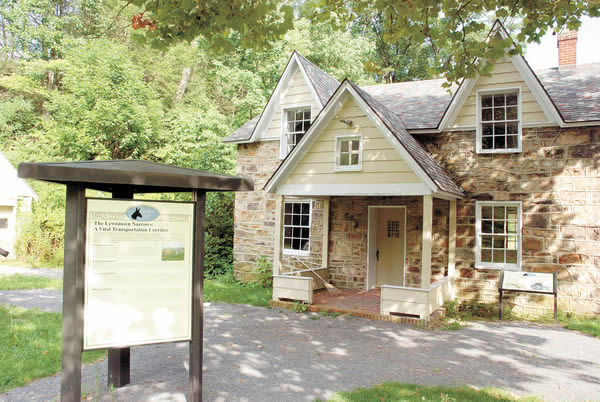 Buffie Boyer / Lewistown Sentinel
The Lewistown Narrows Canal Park preserves the old Lock Keeper's home from the Pennsylvania Canal. The home had to be moved as it sat directly in the path of the project.

One of the greatest challenges for The EADS Group, Inc. design team was to preserve the historical area of the Pennsylvania Canal system running between the existing road and the Juniata River. The Pennsylvania Canal was the first major transportation system that linked Mifflin to Juniata County. According to an article in the Juniata Sentinel by Sheila McCarty Yorks, “Since the canal is a historic resource, it was eligible for the National Register of Historic Places. Federal and state laws required it to be taken into consideration during the reconstruction process, and impacts had to be minimal.” PennDOT agreed to create a canal park near Mifflintown in Juniata County to lessen the impacts of reconstruction. The canal park includes many amenities, such as a visitor area, recreation and picnic area, a Pennsylvania Canal lift lock observational platform, and a restored towpath spillway. Interpretive sign and trail markers were also included to guide visitors on the trail along the Juniata River. A Juniata River Access Area was incorporated, as well. This area includes a paved parking lot, a boat launch, and a fishing access area for the physically challenged. A section of the Pennsylvania Canal Lift Lock No. 13 was also restored during the process. This area became the centerpiece of the canal park, as much of the lift lock was in excellent condition. The exterior of the lock keeper’s house was also updated. Built in 1860 in connection with local iron-mining operations, the lock keeper held the responsibility of lifting the lock, which was adjacent to the house. All amenities were completed to preserve and accentuate the historic Pennsylvania Canal. 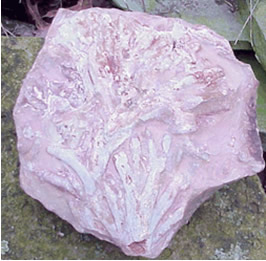 PennDOT
Numerous fossils were discovered excavations dug into the hillsides.

However, some of the most impressive and beautiful aspects of the project could not have been seen driving through the construction. During the production and excavation process, fossils and prehistoric organic material began to appear in excavated rocks, uncovering the history of the Lewistown Narrows. As many as 400 million years ago, a life of algae, scallops, coral, worms, and other sea creatures filled the area of the Lewistown Narrows. As sediment drifted, it formed ridges and valleys with layers of limestone, shale, and sandstone, capturing prehistoric organic material. Today, unless uncovered, there is no evidence on the surface to illustrate how the Lewistown Narrows used to be a sea bottom.

The final project includes 16 structures totaling more than four miles of retaining walls, including a two-mile-long mechanically stabilized earth (MSE) wall. The MSE wall is a retaining wall that is designed to withstand lateral earth and water pressures. With the talus rock slope and the clay buried deep inside Shade Mountain, these walls were placed in the Narrows to stabilize and preserve the shape of the roadway. There are two MSE walls positioned between the east and westbound lanes, and the longest is 2.3 miles. According to Reinforced Earth, Inc., the designer and supplier of the wall, this section is the largest in the U.S.A. and Canada, and the second largest in the entire world. In addition to the MSE walls, nine retaining walls are included to prevent encroachment on the canal and the river.

Additionally, an on-site concrete plant was included with 135,000 cubic yards, equal to 12,000 truckloads of concrete. This effort was an efficient measure that saved time and money. Also included in the project were more than 46 miles of remediation pipe piles. These pipes were drilled into the side of Shade Mountain to provide a solid foundation for the construction of a safe highway.  Furthermore, extensive geotechnical work was done before and during the design to insure stability of the slope. The completed highway has two 12-foot-wide lanes in each direction and 10-foot outside concrete shoulders. 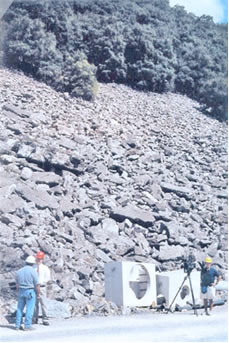 PennDOT
The talus slope of Shade Mountain caused planners, engineers, and workers a great deal of difficulty in the project.

Moreover, the Lewistown Narrows project is the second largest construction project ever awarded to PennDOT. The agency earned a gold award in the “risk taking” category of the National Partnership for Highway Quality “Making a Difference” contest for the Lewistown Narrows. The National Partnership for Highway Quality’s “Making a Difference” award measures many aspects of a project, including overall quality, partnerships between state departments of transportation and private contractors, effectiveness, costs, deliverables, opportunities, and quality management. Because the project involved such challenging design issues and successfully met those challenges, it received the award.

The Lewistown Narrows was also cited for a top award by the Federal Highway Administration’s Excellence in Highway Design competition. Another award, the Ralph Modjeski Award for excellence in transportation design, preservation, and archaeology, was given to the Federal Highway Administration and PennDOT for the development of the park to preserve of the Pennsylvania Canal.

With a tentative completion date of December 2008, the Lewistown Narrows project was finished and opened to traffic a year ahead of schedule on December 14, 2007. Even though the new highway destroys the beauty of the old Lewistown Narrows, roadway safety was the number one concern, and saving numerous lives yearly with this construction was key. Now a fairly straight stretch of divided highway, the once treacherous roadway is no more. The transformation has created a much improved and safer passage, and it has eliminated conditions that have been a curse to drivers for decades.