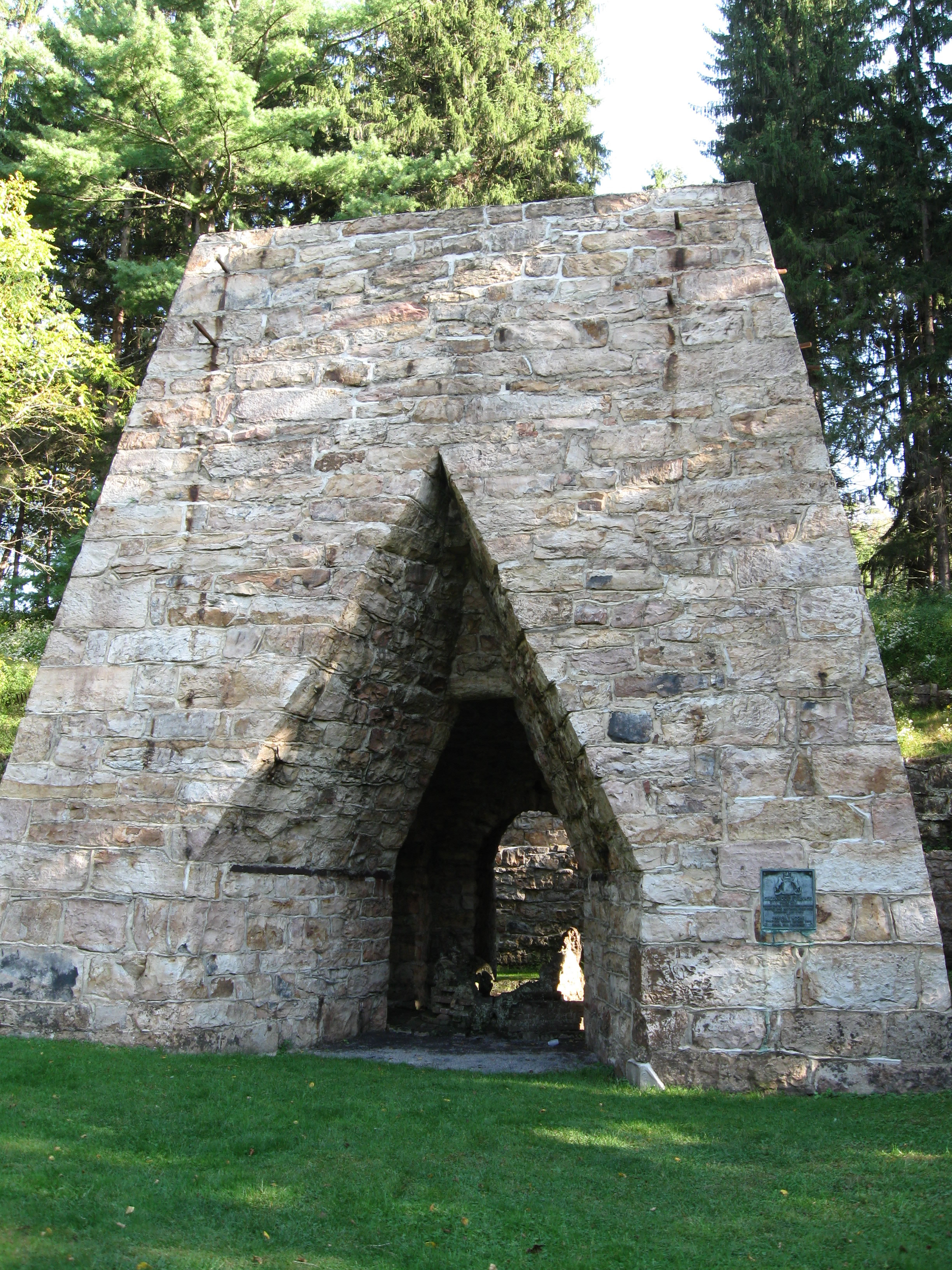 Alan Jalowitz
Greenwood Furnace #2 after its restoration.
See the Gallery at the end of the article.

At the end of the day, on December 7, 1904, manager Harvey Thompson sounded the steam whistle at Greenwood Furnace for the final time. As Captain Samuel Moore supervised the scene, ironworkers and their families congregated to witness the last run of the burning iron flow. For nearly seventy years, the citizens of Greenwood Furnace, Huntingdon County had watched the glare of the molten metal turn the purple mountains gold, but now that era had come to an end. That last whistle meant more than just an end to their jobs; it signified the closing of their way of life.

Ideal for mining with boundless forests and vast deposits of rich iron, Greenwood Furnace was once the home to a thriving iron industry, producing iron and charcoal of the finest grade. How an industrial town came to be this fascinating state park with so much to offer is a story that contains historical, industrial, and even great recreational value.

The story of Greenwood Furnace began in 1833 when two Philadelphia bankers, James Logan and William Norris, purchased five hundred thousand acres of land, which they sold to the Freedom Forge Company. At the time, Birmingham, Alabama, was the only other place in the country where soft-fossil ore was made into charcoal pig iron. It is no shock that the small town of Greenwood shot up in the crannies of the mountains, where natural resources for first grade iron were in such abundance. In the mid 19th century, there were eighty other furnaces in the Commonwealth of Pennsylvania; however, none of them compared to the one managed at Greenwood.

Situated in the mountains of Huntingdon County Greenwood Furnace received its name from the lush and magnificent green trees that densely covered the area. It quickly grew into one of the largest and most successfully run iron towns in the country and by 1864 four separate furnaces had been built, scattered throughout the Greenwood Furnace region: “Little Furnace,” “Rebecca Furnace,” “Monroe Furnace,” and “Greenwood Furnace.” The Greenwood Furnace ran consistently throughout the year, receiving its power from the lake and heated with charcoal. In the mid 19th century, the charcoal-fueled furnace produced about four tons of pig iron ingots per day with an annual output of around 1,200 tons. The iron was hauled by wagons over Stone Mountain to Freedom Iron Works to be turned into wrought iron. The combination of the abundance of natural resources and the dedicated diligent workers led to a very successful business and town as the 1800s progressed. 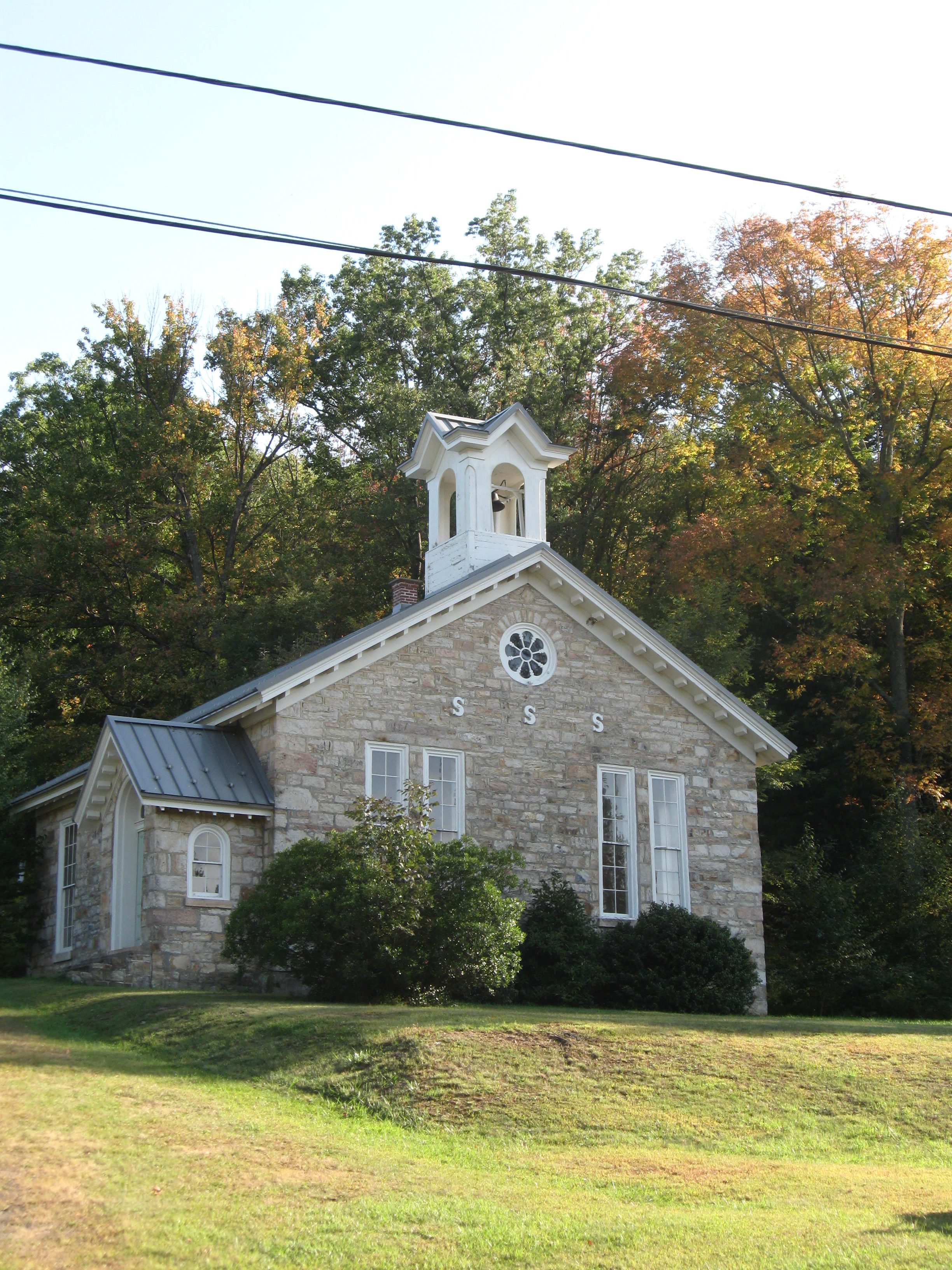 As the iron output grew larger and larger with the years, so did the town of Greenwood. At the height of the Greenwood Furnace in the early 1880s, the town consisted of a hundred and twenty seven buildings: four furnaces, an ironmaster’s mansion, a company store, a blacksmith, a wagon shop, a church, a school, seventeen stables, ninety tenant houses, and a gristmill. The community was run similarly to a feudal estate system and was supervised by the “boss.” The “boss” was the most knowledgeable of the ironworkers making all the technological decisions and seen by the community as a father figure.

The success of the town was possible because of the people who lived in it. Each member of town worked in some manner to produce Greenwood’s iron. The colliers, furnace workers, were a hardy lot who took great pride in their work. The citizens of Greenwood were peaceable and law-abiding; they did not earn abundant wages, but were content and did not complain. They were never bothered with labor unions nor did they follow the eight-hour work system. As one former employee of Greenwood said, “We followed the old-fashioned sun up to sun down system.” Greenwood in its golden age was home to some of the country’s best woodchoppers. The Huffman Brothers, “with axes as sharp as razor blades” could cut through anything. With the four iron furnaces running to capacity, hard working citizens, and the best woodchoppers in the country, it would have been difficult to predict the end of Greenwood Furnace and its citizens within the next thirty years.

There are numerous reasons for the decline of this historical town. The scarcity of natural resources started to become a major issue; the town used 1/3 of the available fossil ore just in the ten-year period of 1839-1849. The wood used for the furnace became scarce, forcing the workers to travel further and further to collect timber. The combination of rising costs for charcoal iron and the world turning to alternative fuels and materials led the Greenwood Furnace to a great decline in demand and output. After work was officially discontinued in 1904, the citizens quickly relocated, small businesses closed, and the town was dismantled. Greenwood Furnace would soon become a ghost town. Even though it was gone, it would not be forgotten. 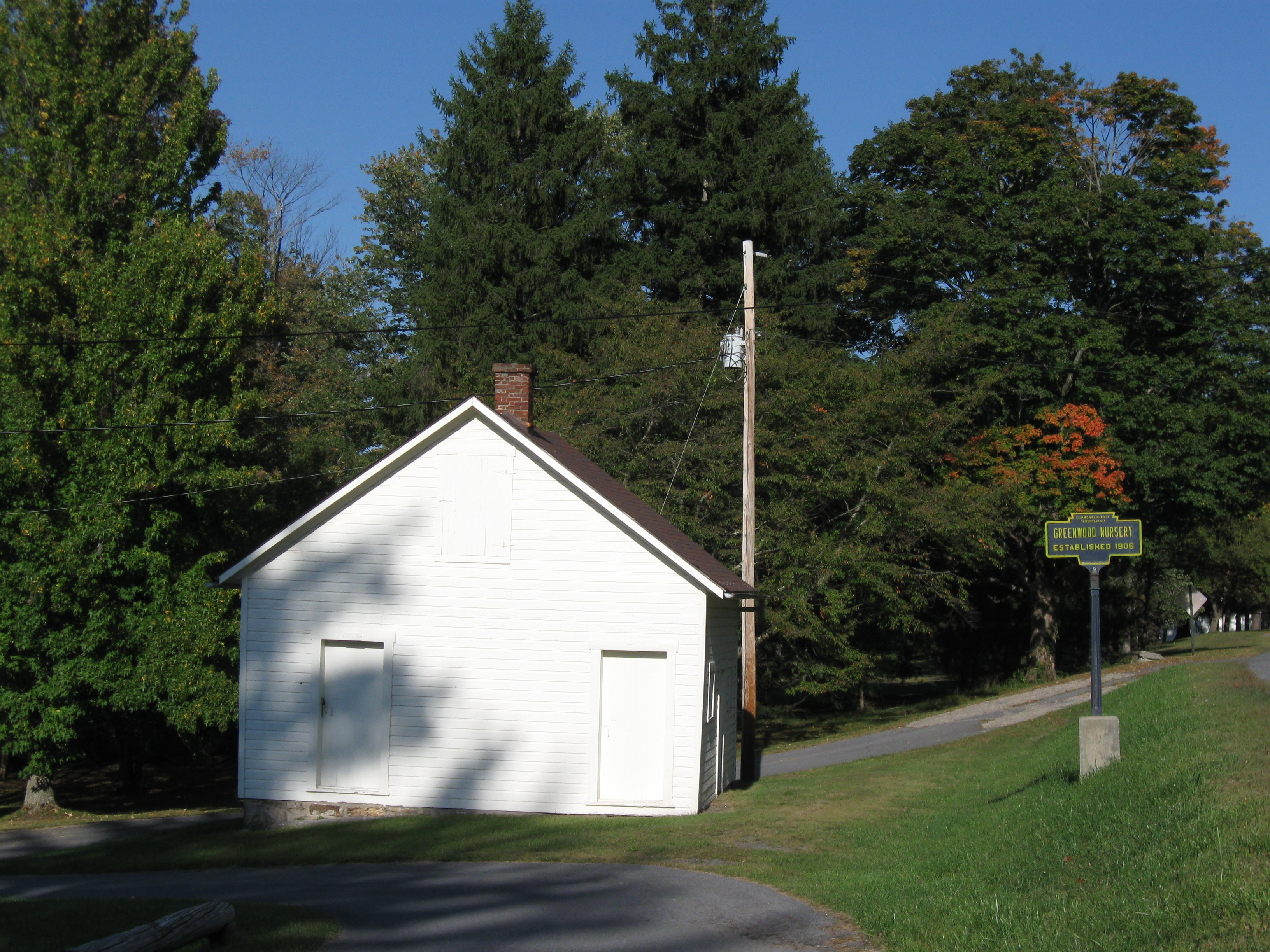 Alan Jalowitz
Greenwood Nursery helped in the re-foresting of the state of Pennsylvania after much of the land had been cleared in the lumber boom.

The state of Pennsylvania, looking to restore the trees and land that was used so aggressively while the Greenwood Furnace was still active, purchased the area in 1906. Greenwood Furnace and the surrounding area had been fortunate enough to have the land enriched by years of charcoal dust and ash. This enriched soil made the land just right for growing plants and trees. The Pennsylvania government soon began to restore the land by replanting trees. In an extraordinarily short time, three years, Greenwood seedlings were being shipped to distances throughout the eastern United States. The nursery was active for almost ninety years reaching its peak in the 1970s where it produced an average of three million seedlings a year. This peaceful, yet profitable, nursery widely exceeded the state’s expectations, but this was still only half of what Greenwood Furnace had to offer.

Every year in the second week of August, after the plant had been shutdown, a great reunion was held to afford old residents a chance to come back and talk of the old days. It did not take the state of Pennsylvania much time to realize the importance of this land and in 1925 it officially made Greenwood Furnace a public state park. The state restored the main furnace less than a decade later and today six original buildings still stand in excellent condition: cemetery, mansion, church, and blacksmith and wagon shop. 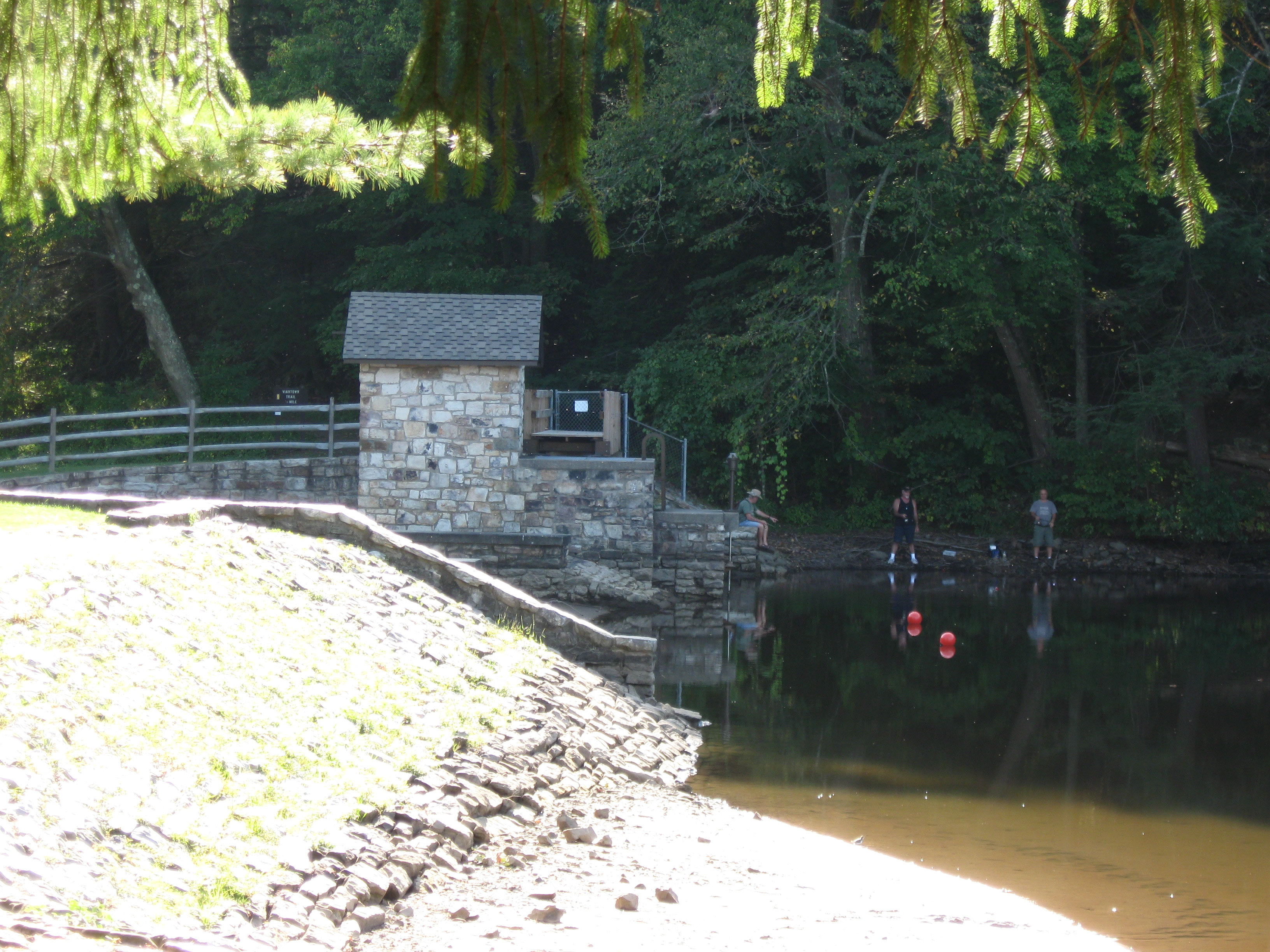 Alan Jalowitz
Many people enjoy fishing near the small dam at Greenwood Furnace.

Along with offering tours of the old town to hear about its wealthy history, Greenwood Furnace State Park is also the home to many recreational activities. Some of the leisurely activities that the park’s guests can enjoy include: hiking, picnicking, swimming, fishing, hunting, and camping. The park is famous to central Pennsylvanians for its beautiful campgrounds, consisting of close to fifty campsites all with electricity. Mavis Friedman, a 91 year old, third generation native to the area, can best sum up this picturesque park, “I call it [Greenwood Furnace] Pennsylvania’s historic rustic gem; a land of both industrial and natural beauty.” What draws visitors, according to Ms. Friedman, is neither the size nor the flash of Greenwood as there are many larger and glitzier state parks; it is its rich history that one can “smell” in the air.

Whether visitors travel for this park’s “smell” or for its famous camping, Greenwood Furnace has certainly made a name for itself in Pennsylvania history. The state park has been granted numerous awards by the Commonwealth of Pennsylvania, the National Park Service, and the American Society for metals. These awards would, however, would not have come with out the stunning story of Greenwood Furnace. From an iron furnace community, to a ghost town, to a now beautiful state park, Greenwood Furnace can amaze and delight virtually any visitor.

See the Gallery below for more pictures of Greenwood Furnace. 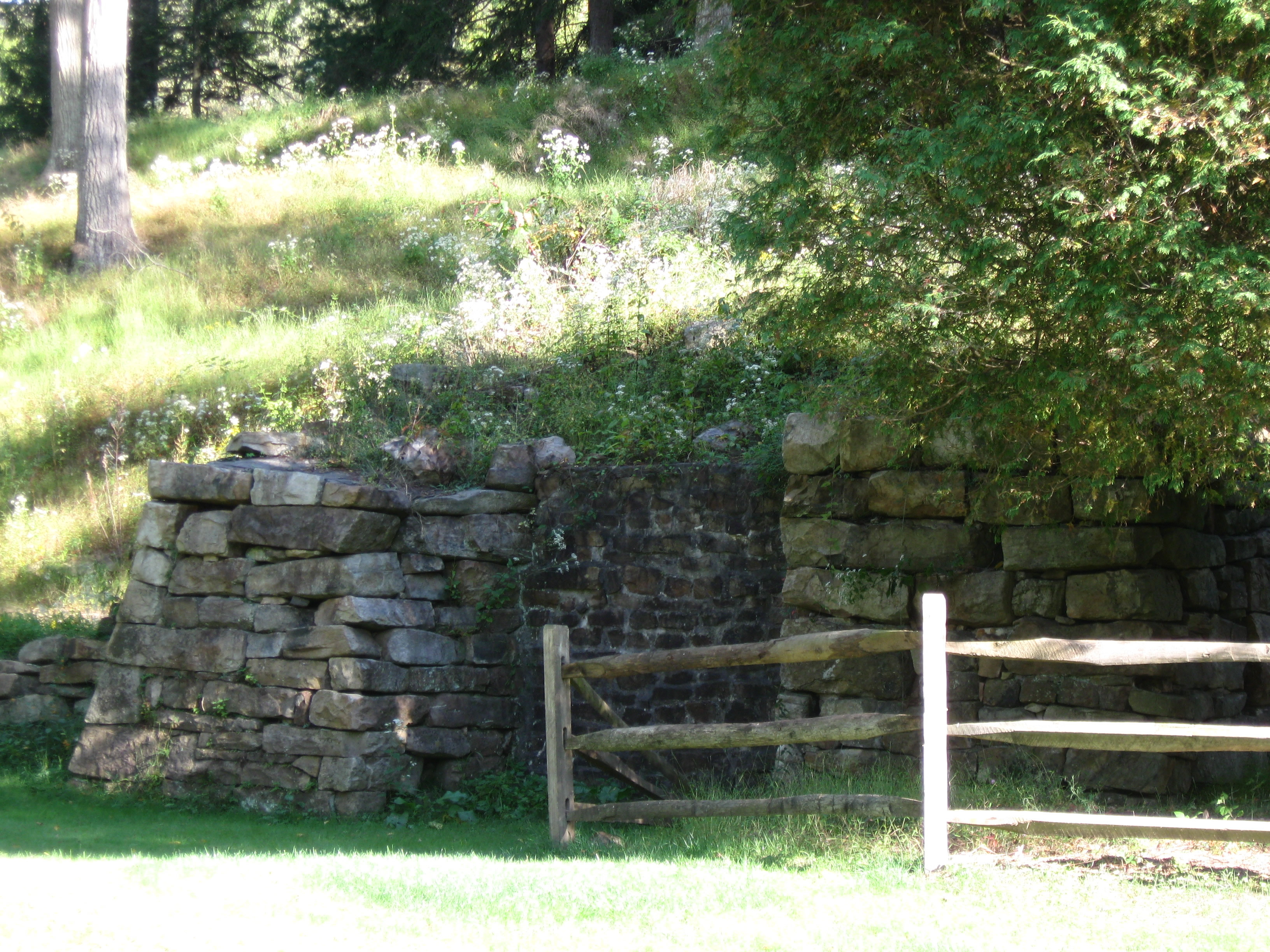 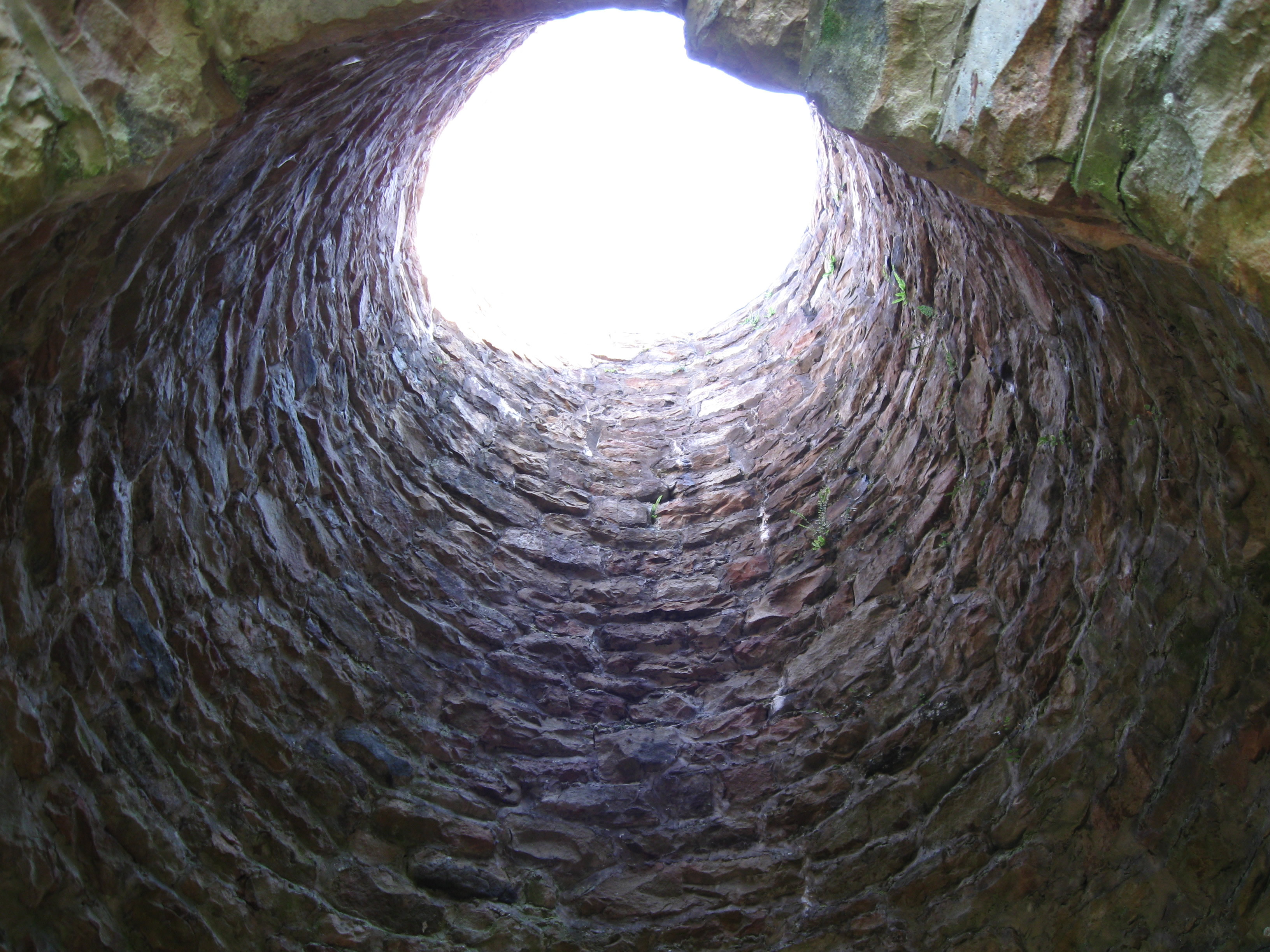 Alan Jalowitz
Raw iron ore was poured down this shaft into a central pit for smelting. 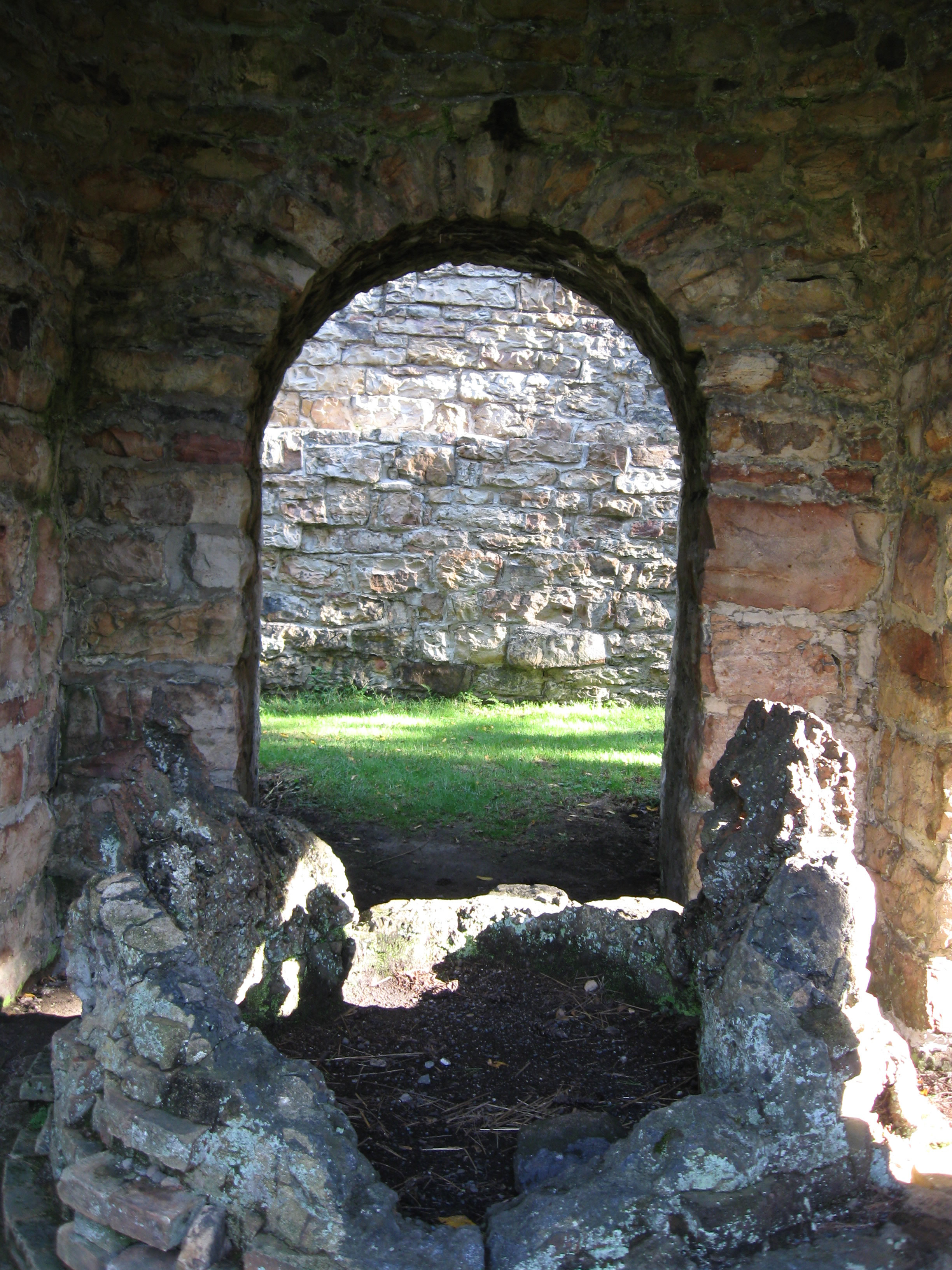 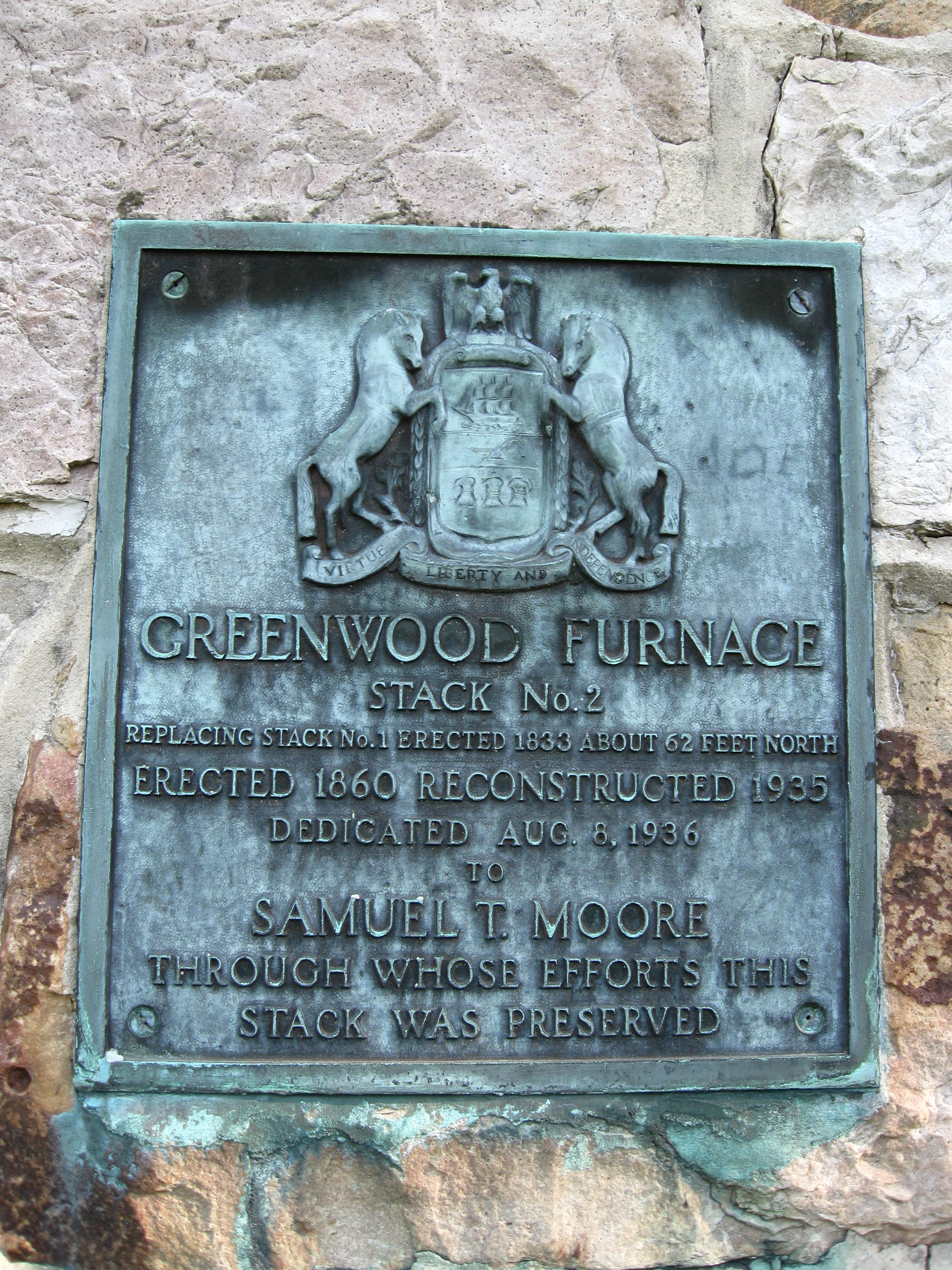 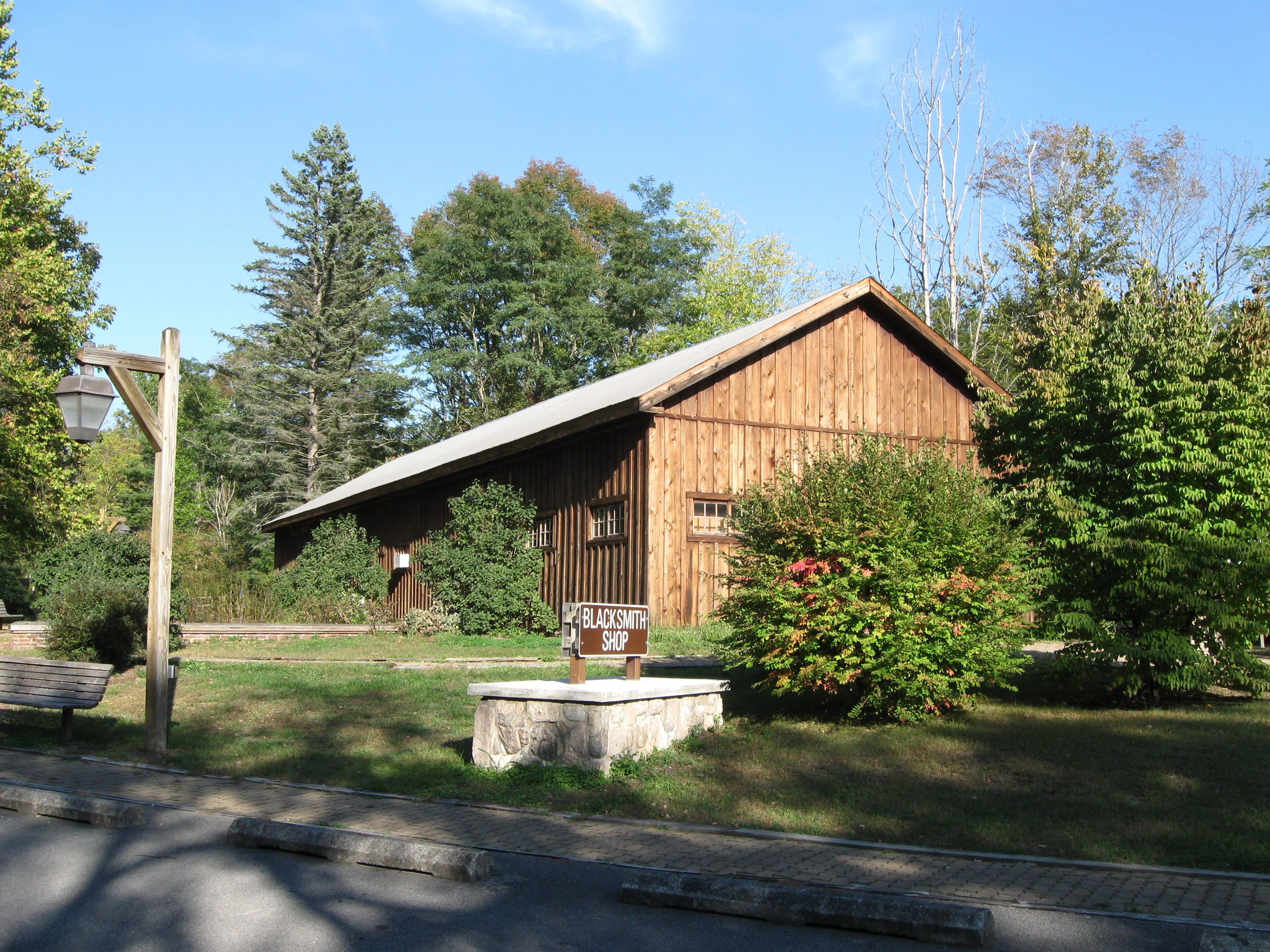 Alan Jalowitz
The Blacksmith's Shop at Greenwood Furnace also serves as an education center when the park is open.
County:
Huntingdon
Spring 2010