For over a hundred years, Grit was rural America's favorite weekly newspaper. First published in Williamsport in December, 1882 as part of the Daily Sun and Banner's Saturday edition, Grit informed several small towns of issues that were relevant to them. Stories concerning patriotism, religion, family values, or just plain good humor were likely to find their way into Grit. Originated by Rev. Henry Wolf, the editor of the Daily Sun and Banner, Grit was originally a literary edition of the daily newspaper. Eventually, the paper would become so popular that by the middle of the twentieth century, the paper on West Third and Williams Streets would hold claim to the most widely distributed country and small-town weekly newspaper in the nation. For all of Grit's success, the paper nearly folded a few years after its inception. 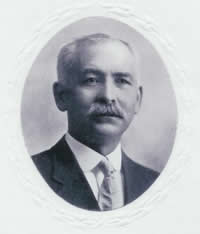 Due to rising costs and Grit's dwindling circulation, the Daily Sun and Banner prepared to sell the Saturday edition of their daily a little more than a year after the paper was first published. In 1884, a 25-year-old German immigrant by the name of Dietrick Lamade formed a partnership that enabled him to purchase the Williamsport Grit and a local newspaper plant. Lamade had been only eight years old when he moved to America, but had become well-versed in the newspaper industry by the time of the purchase. He was previously a foreman in the Daily Sun and Banner press room and in 1883 was a printer for the United States Signal Station at Williamsport. He was also a business manager of the weekly Williamsport Times until that paper merged with Grit. Lamade invested $150 in cash and borrowed $1,100 between himself and his partners to purchase the paper and the plant. From the start of his purchase, Lamade was publisher and president of the printing company.

Lamade made a few changes when first obtaining the paper. One of these was to move the paper to Sundays and another was to create the Grit Publishing Company. Lamade believed the magazine could succeed but knew he needed to introduce the paper to a larger audience in order to gain readership and money. Although the paper still struggled to turn a profit through the following year, Lamade devised a plan to turn the paper around. In 1885, the Grit began promoting a Thanksgiving Day raffle in order to attract readers outside of Williamsport. Among the prizes offered were a rifle, piano, and a bedroom suite. To ensure that the paper would succeed in gaining an audience, Lamade traversed Pennsylvania by train to promote his weekly paper. When entering different towns, Lamade would hire selling agents and local correspondents. He even went as far to hire young boys to post circulars. Each of these circulars contained a coupon for the raffle. If someone was to combine a coupon from one of these circulars with three other coupons from the Grit, then the bearer was entitled to a chance for the Thanksgiving Day raffle. Lamade's promotion and hard-work paid off because subscribers to the paper became regular readers. Attracted originally by the raffle, subscribers now had become attracted by the weekly articles. In less than a decade the paper's circulation rose to 53,000 throughout states east of the Mississippi. 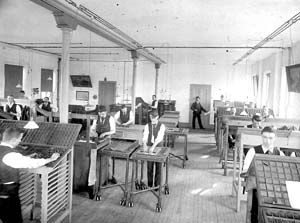 With the paper's newfound success, Lamade was able to purchase Remington typewriters and have them delivered by horse-drawn wagon to the Grit offices in 1892. He ran the newspaper out of a third-floor single room (in the plant he purchased) before moving down to a storefront location in 1886. Grit was becoming a widely-circulated paper and its continued success was due to several factors. One major reason that Lamade was so successful with Grit was his previous attempt to hire young boys to help him with circulation. During the twentieth century Grit was sold across the country by young boys, most of whom were recruited by ads in comic books. Small innovations such as national newsboy delivery and direct mail helped Lamade increase Grit's influence on rural America. Several well-known Americans obtained their first job with Grit. U.S. Senator John Glenn, singing cowboy Gene Autry, poet Carl Sandburg, Kentucky Fried Chicken founder Harland Sanders, singer Loretta Lynn and former baseball Commissioners Happy Chandler and Ford Frick are just a few examples.

Grit's influence kept growing throughout the first half of the twentieth century. Eventually it would become one of the first newspapers in America to feature color photographs and fictional supplements. At the paper's 50th anniversary in 1932, the paper reached approximately 400,000 people across the nation. After Lamade retired in 1936, four of his sons were left in charge to continue publishing the paper. At the height of Grit's popularity in 1969, the weekly had a total circulation of 1.5 million. The paper is fondly remembered by many older Americans and read by many today. 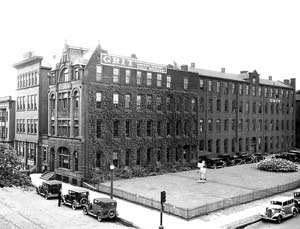 In the late 1970s, Grit began to encounter financial difficulties, forcing the Lamade family to sell the paper in 1981. In 1990, Grit was sold to Stauffer Communications Inc. of Topeka , Kansas and converted to a magazine format. Then in 1995, The Morris Communications Corporation purchased Stauffer Communications thereby acquiring Grit in the process. In less than a year the magazine was again purchased, this time by the West-Virginia-based Ogden Newspapers. Currently, Grit operates as a bimonthly magazine under a subsidiary, Ogden Publications Inc., and remains in Topeka, Kansas. Interestingly, the Williamsport Sun-Gazette (formerly the Daily Sun and Banner) and Grit are both owned and operated by the Ogden Newspaper Group. Though much has changed about Grit since the Lamade family sold it, a guiding principle of Dietrick Lamade has remained with it: "Wherever possible, suggest peace and good will toward men. Give our readers courage and strength for their daily tasks. ...By such a course, we can do much to improve the minds and lives of the millions of people who read Grit, and bring them a higher realization of their duties in life."