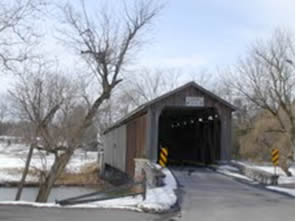 When we think of bridges, images of the Golden Gate and Brooklyn Bridge come to mind. In Pennsylvania. we may think of the Benjamin Franklin or the Commodore Barry, bridges that boast great strength and size, mostly composed of steel and used solely for the purpose of transportation. But what about the bridges that helped shape what Pennsylvania is today? Some of our most important and significant bridges lay in the most rural areas of our state. Pennsylvania’s covered bridges are standing pieces of our history—each built for a specific purpose, and each having a story to tell.

Hidden in 47 of Pennsylvania’s 67 counties are the handcrafted masterpieces of the 19th century. Spanning over roaring rivers or quiet creeks lies part of the foundation of Pennsylvania’s history and a style of engineering lost in our past. The authentic covered bridges of Pennsylvania have become historical landmarks due to their rich past, interesting architecture and commitment by the community to restore them and keep them safe.

Despite the number of covered bridges built in our country, they did not originate in America. They trace back hundreds of years to Asia and Europe. Even the original trusses used in American bridges come from Italian architecture invented in 1570. But these bridges and architectural styles were phased out and over time, forgotten. America resurrected the old covered bridges, put its own twist on its foundations, engineering and architecture, and pushed the strength and span of the covered bridge to a new level. 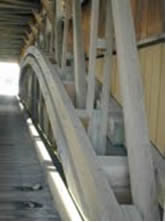 Jim Smedley
Hunsecker's Mill Bridge's truss system was constructed in the authentic manner in the wake of Hurricane Agnes.

In the late eighteenth century, the city of Philadelphia realized that it lacked stable trade routes to connect it to the expanding countryside and the world beyond. At the time transportation was slow and unreliable. In 1796, Charles Peale drafted the first plans for a covered bridge across the Schuykill River that modern covered bridge expert Richard Allen said would “provide year-round trade into Philadelphia that would draw trade to and from the West like a magnet.” Unfortunately, Peale’s plans, among many others, were rejected due to cost or lack of resources.

In 1798, the Schuylkill Permanent Bridge Company was formed to monitor the process and make sure a newly-approved bridge was completed. In October 1800, construction began on Market Street to erect a stone arch bridge, but after a few years the workers and resources were scarce and it became clear that a new plan for a bridge was needed. The Schuylkill Permanent Bridge Company called in Timothy Palmer to finish the job. He completed the task in 1805 and the bridge was named the Permanent Bridge and was made entirely of wood. It was the first covered bridge built in America.

The wooden covered bridge was ideal for Pennsylvania because it was cheap and easy to maintain. Pennsylvania’s abundance of rivers and streams cutting through its land proved difficult for the people to move, transport goods and expand their towns and businesses. At the peak of bridge building, Pennsylvania boasted over 1,500 covered bridges. Wood was used because it was so plentiful and was easy to gather quickly at a low cost, and the cover was introduced to protect the wood foundation from the elements. Without the cover, wooden bridges would only have survived 10 to 12 years. With the cover added, at least ten bridges have been proven to last 150 years and counting.

Whether they were built by the government or privately owned, none of the 1,500 covered bridges were the same. However, for a covered bridge expert, it can be easy to tell which bridges were constructed by the same builder because every bridge builder had his own style; therefore, it is not uncommon to find a county with bridges that are constructed in the same manner. 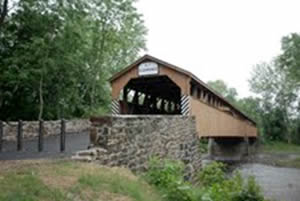 Jim Smedley
The Academia Bridge in Juniata County has stood longer than any other covered bridge in Pennsylvania.

Authentic covered bridges were constructed in a way that is hard to duplicate today. Stone for walls were cut perfectly and mortared together. Changes in wood also make it more difficult to construct strong bridges. Milton S. Graton, a master bridge constructor says in The Last of the Covered Bridge Builders that timber grown from trees 125 to 150 years old “is superb. It is quite free from the tendency to wind or twist. […] New timber of the same species will never reach the quality of its ancestor. It is thinned out, will grow faster, be of coarser grain, will not be as dense and strong, [and] have larger knots.”

Covered Bridge trusses were made of wood and consist of only three styles—the Queen Post, the Burr Arch or the Town Lattice. The truss supports the weight of the bridge and if any of these three styles are not used, the covered bridge is not considered authentic. There also are the stone abutments, which were the supports of the bridge. Most abutments and walls were precisely built and so strong, that they usually last longer than the bridge itself. A bridge is considered authentic until it has been moved or rebuilt with a modern truss.

Most of Pennsylvania’s remaining covered bridges are over a hundred years old. They have stood the test of time against floods, the switch from horseback to automobile, and many significant changes our country has seen over the past few centuries. Many of the state’s standing covered bridges are considered historical landmarks because of the rich history they offer and the unique stories they tell.

In Adams County lies the most historic bridge in Pennsylvania. At only 100 feet, Sach’s Bridge played a crucial role during the Civil War. During the Battle of Gettysburg in 1863 the bridge was used for the movement of both Confederate and Union soldiers. Specifically it was used when General Robert E. Lee marched his soldiers over the bridge as he retreated from his defeat of Pickett’s Charge. Built in 1844, the bridge has a visible truss structure, not commonly seen in the covered bridges standing today. The original bridge still stood until 1996 when a flood lifted it off its abutments. The town was eager to do whatever necessary to save what was left of the bridge. They built new abutments three feet higher than the ones before and fortunately the body of the original in still intact. 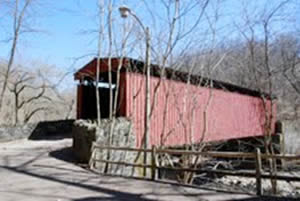 Jim Smedley
Thomas Mill Bridge in Philadelphia is the only remaining covered bridge in a metropolitan area in the United States.

In Philadelphia, the only remaining covered bridge in a metropolitan area in the whole of the United States rests in Fairmount Park. The Thomas Mill Bridge, erected in 1855 with a length of 86 feet, was used as the centerpiece for the centennial birthday party of our country in 1876. Its structure is unique and one of the longest Howe truss style covered bridges left in Pennsylvania. The Thomas Mill Bridge is only accessible by foot and can be difficult for sight-seers to find if they don’t know their way around the area.

Juniata County offers the Academia Bridge; built in 1870, it is the longest standing covered bridge in Pennsylvania. It stretches 278 feet over the Tuscarora Creek. Despite the history behind this landmark, it has been one of the costliest covered bridges to maintain. The state has spent over $1.5 million restoring the bridge and more recently repairs have been due to vandalism. The damage has been so bad and common that the Juniata County Historical Society installed security cameras on the bridge. Although it is a shame deliberate destruction is done to the covered bridges, it is promising and reassuring to know that there are people who go to such great lengths to protect them.

Lancaster County boasts the most covered bridges in all of Pennsylvania, with 29 in all, and has the second largest number in the United States. The dedication of local citizens to preserving their historic bridges was tested in 1972 when Hurricane Agnes caused mass floods through Pennsylvania’s rivers and streams. The Hunsecker’s Mill Bridge, built in 1843, could not handle the power of the floodwaters and was washed off of its abutments and floated downstream. The bridge was unsalvageable and almost completely destroyed by the flood. The original decision made by the Pennsylvania Department of Transportation was to replace the Hunsecker’s Mill Bridge with a concrete bridge, but the people in the surrounding area would not hear of it. They fought for the bridge to be replaced with another covered bridge and soon constructed an authentic covered bridge that keeps the Hunsecker’s Mill Bridge name. 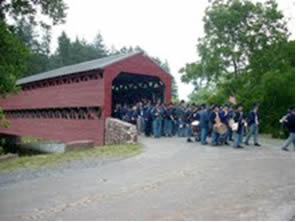 Jim Smedley
Sach's Bridge was used by both sides in the Civil War.

These four bridges are only a fraction of the history that lies behind the past, innovation and famous feats of our great state. However, what once were 1,526 covered bridges are now 197. Soon there may be far fewer of them, if these impressive structures are not preserved. Covered bridge societies and other historical groups have stepped up to create public awareness of these structures’ history. As Graton says “it is the person lacking fundamental knowledge and love for these landmarks whom we are trying to instill an understanding that will help create desire to preserve the irreplaceable.”

The beauty, simplicity and charm of the covered bridge is that it has something to offer for everyone. An engineer may appreciate the architecture behind its structure, a photographer or painter could appreciate the natural and quaint scenery that surrounds it, and a historian may value the stories of the past that the bridge can tell. Each was built for a purpose, whether it was to transport grain at a mill or connect two flourishing counties, each covered bridge is an important piece of Pennsylvania’s history, desperate to be preserved and tell its story.