The Appalachian National Scenic Trail, the first national scenic trail and the nation’s longest marked footpath, crosses fourteen states, from its northern end in Maine to its southernmost point in Georgia. Most hikers are northbound, beginning their trip in Georgia. These hikers reach the Pennsylvania portion of the trail at the Pennsylvania-Maryland border, near Waynesboro, in Franklin County, Pennsylvania. At this point begins the month-long trip through the 229-mile portion of the “Rocksylvania” trail, known for its tendency to batter hikers’ ankles and boots.

Once inside Pennsylvania, the trail continues in a general northwest direction through the state. Along the trail, animal lovers encounter deer prancing through the woods. Turtles and snakes crawl and slither across the ground and raccoons and groundhogs can be seen running through the night. Hikers should be on the lookout for the occasional sighting of a bear or bobcat. The state tree, the Hemlock, and the state flower, the Mountain Laurel, are prevalent along the trail and provide refreshing shade and beauty on a hot summer’s day.

Hikers first reach Caledonia State Park, where they can visit two sites rich in Pennsylvania history: the former Ironmaster’s mansion and the iron furnace museum. Hikers continue through South Mountain, where they can see the ruins of an iron furnace where firearms were constructed for the American Revolution. At this point in the journey, hikers reach the halfway point of the 2,178 mile-long Appalachian Trail at Pine Grove Furnace in Cumberland County, Pennsylvania. 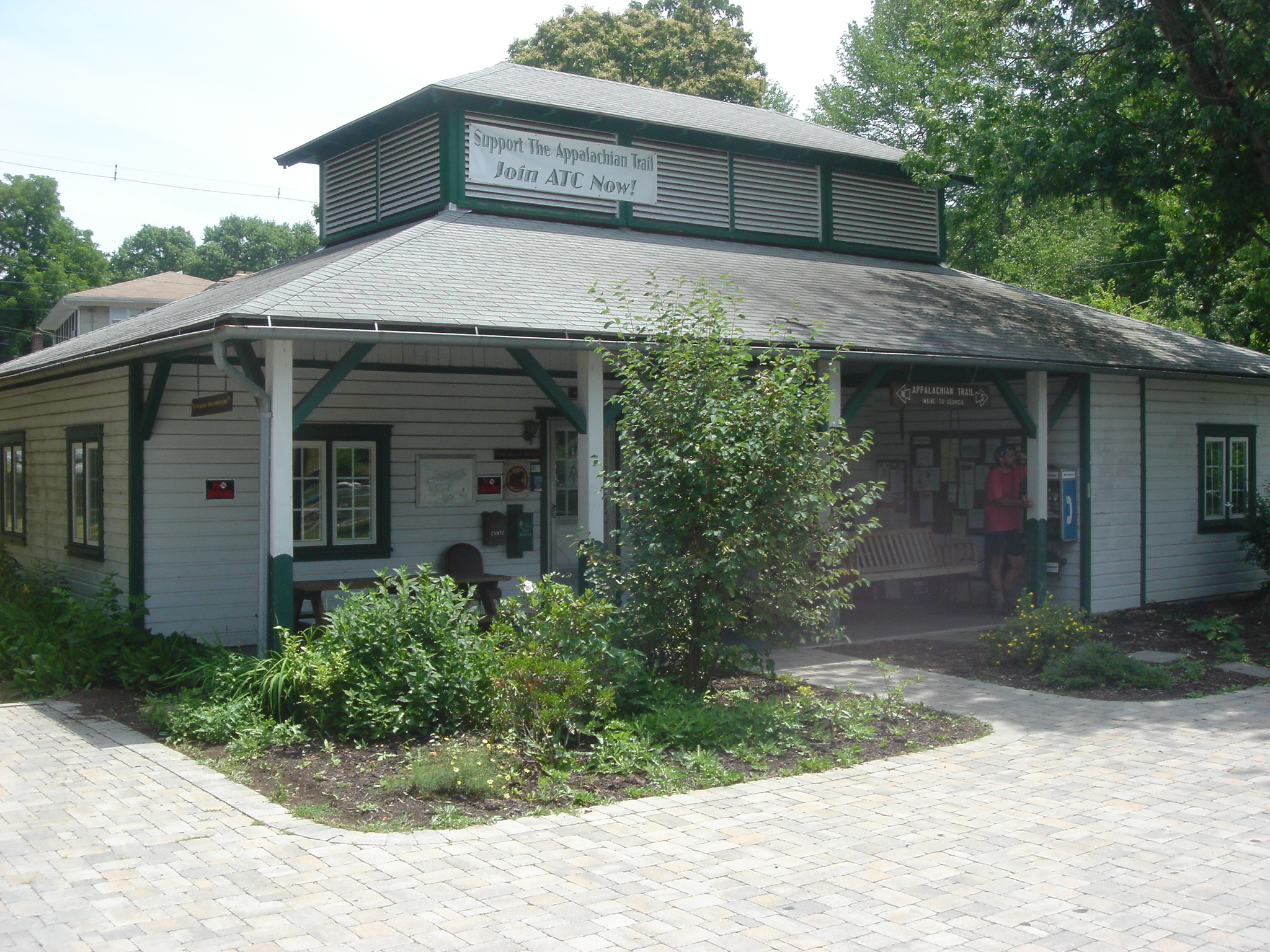 Staecker / Wikimedia
The Appalachian Trail Conservancy is a group of organizations that preserve and protect the Trail. This office of the ATC is in Boiling Springs, PA.

Upon reaching this point, hikers often celebrate with the “half-gallon challenge.” It is tradition for hikers to stop at the park’s general store and attempt to eat an entire half gallon of ice cream to commemorate their achievements. With ice cream dripping down their chins, hikers grimace as they try to force down the last few bites in an effort to beat a 60-year-old man’s record of completing the challenge in four minutes and twenty seconds. Hikers pay $5.49 for their half gallon, but if they finish, the ice cream is on the house. Although most hikers never complete their half-gallon, this landmark stop is a refreshing breather for hikers as they prepare to finish the rest of the trail.

Having celebrated the halfway point in the trail, hikers continue northwestward, crossing the Susquehanna River along the way. After passing by the state capital in Dauphin County, hikers encounter Peters Mountain, which offers scenic views of the Susquehanna. Hikers are treated to a trip back in time as they travel through Rausch Gap, in Lebanon County, where they can see the remains of an old mining town that thrived in the 1800s. The scenic journey continues as hikers venture into Schuylkill County where they can take in the views from Sharp Mountain. 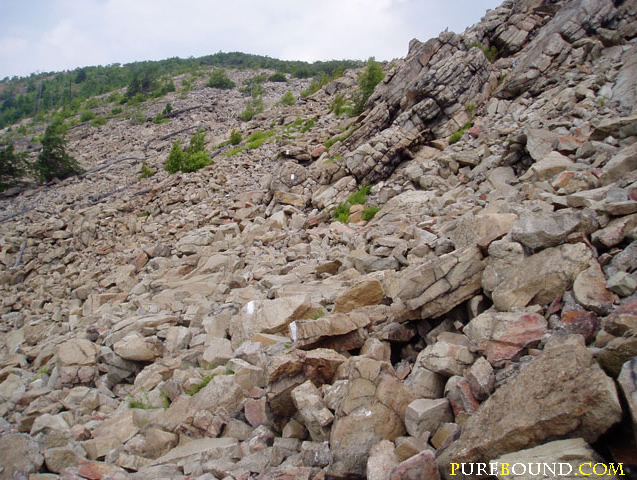 PureBound.com - Inspiring Adventure
Rocks like these on Blue Mountain have inspired many wry comments from hikers over the years.

At this point in the journey, hikers can also stop at Hawk Mountain Sanctuary. The sanctuary, founded by Rosalie Barrow Edge in the 1930s, is a great place for bird watching. Each year, an average of 18,000 hawks, eagles, and falcons can be seen soaring high above the clouds during the autumn migration. After admiring the local wildlife, hikers continue through the rolling hills of the Blue Mountain area in Lehigh County, which offer beautiful views of Pennsylvania farmland. Finally, hikers approach Kittatinny Mountain, encountering some of the most rugged terrain found on the Pennsylvania Trails. This section of the trail finds hikers struggling for balance and composure as rocks threaten to trip them at every turn. Trail groups that maintain this section of the hike often joke that they “sharpen the rocks each spring in anticipation of the year’s hikers.” Hikers leave the Pennsylvania portion of the trail through Delaware Gap in Monroe County, continuing their trek on the Appalachian Trail through New Jersey.

The trail is marked by rectangular blazes painted on trees, telephone poles, and rocks. The white blazes refer to the official trail, while the blue blazes designate side trails or short cuts. “Purists” are those hikers who never leave the trail and follow only the white blazes. Yellow blazes mark the state park boundaries. Hikers called “yellow blazers” are those hikers who use hitchhiking to complete the trail. This term is said to have come from the yellow dividing lines on the road.

PureBound.com - Inspiring Adventure
Some stretches of Trail traverse relatively even ground, rather than "Rocksylvania."

There are nearly a dozen trail clubs that volunteer throughout the year to maintain the Pennsylvania portion of the trail. The Wilmington Trail Club, the Philadelphia Trail Club, and many others work on maintenance, boundary monitoring, water sampling, and rare species monitoring. These clubs are dedicated to preserving the trail and offering educational and outdoor recreation opportunities to those who wish to use the trail.

Earning a trail name is an important tradition on the Appalachian Trail. Trail names allow hikers the freedom of taking on another persona. These names are usually given based on an occurrence that happens along the trail or a specific characteristic about the hiker. Trail names are also used when recording in the logbooks along the trail. The logbooks are mainly used as a safety precaution, but are also fun to read for advice and experience from previous hikers. If a hiker is missing, a ranger can locate him or her by reading the logbook entries and retracing their steps.

Pennsylvania’s Appalachian Trail offers hikers a chance to escape to the outdoors to discover the state’s natural beauty. Yet hikers can also get a taste of Pennsylvania history with the museums and attractions that dot the trail. Thru-hikers and section hikers alike will enjoy the friendships formed (and the ice cream eaten) along the way. No matter the reason for hiking a portion or the entirety of the alternately scenic and challenging route, the trail will lead the way.