Home on the Grange 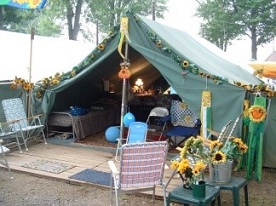 Week after next all roads will lead to Centre Hall where the Grangers will put on their annual encampment and fair. This fair grows in size and popularity and there is many a man who expect to ‘knock off work’ for a week to camp on the fairgrounds. A week well spent in recreation, education and renewing acquaintances – Millheim Journal, August 15, 1929

During the last week in August, thousands gather at the Grange Fairgrounds in Centre Hall, Centre County, to celebrate another year at one of the last agricultural encampment fairs in the country. There are 950 tents, 1300 RVs, hundreds of concessions, over 7,000 exhibit items, amusement rides, animals of all shapes and sizes, carnival games, and much more. People come from miles around to ride a Ferris wheel, pet a pot-bellied pig, play a round of ski ball on the midway, watch a tractor pull competition, eat an ice cream sundae, or catch a country music concert at the grandstand. 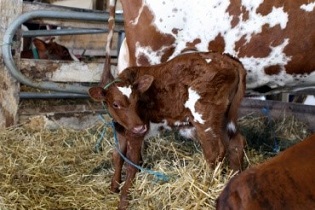 ©yuan2033 - flickr.com
A young Ayrshire calf stands with its mother in the Dairy Barn.

Maggie Harding grew up at the fair and shared a little secret. “From the top of the Ferris wheel you could see everything: The thick smoke billowing out of the souped-up vintage tractors as they try to pull weight farther than their opponents in the tractor pull and horses flying over jumps in equestrian ring.” This eclectic combination of friendship, tradition, agriculture, and neon lights is the one and only Centre County Grange Fair. The fairgrounds consist of 264 sprawling acres of RV campers, horse arenas and outdoor rings, eight livestock barns, indoor exhibit space, and a show arena. Two stages with grandstands seat 3,700 people indoors, explained Joe Myers in his 2005 fair documentary. For this one special week each year, every aspect of the grounds comes alive with laughter and excitement as it becomes home for many families at this unique county fair.

Ed Horning has been a 4-H Extension Educator since 1974 and involved in the Grange Fair for just as long. 4-H is a youth organization administered by the National Institute of Food and Agriculture of the United States Department of Agriculture with the mission of advancing the field of youth development. For most 4-H’ers, their projects reach fruition at the Grange Fair, representing a celebratory end to a period of hard work and commitment to their individual projects. According to Horning, tradition and volunteer dedication make the Grange Fair possible:

The Grange Fair tradition provides a unique experience to both attendees and fair participants. The tent and trailer encampment makes Grange Fair an annual family reunion for hundreds of families. For 130 plus years, the Grange Fair and Encampment has been managed by grange volunteers and operates with more than a 1.5 million dollar budget. It’s a major event affecting people and communities across Pennsylvania. Moreover, Grange Fair maintains a strong agricultural connection and focus and provides special support to youth activities especially 4-H and the FFA [Future Farmers of America].

The relationship of the Grange Fair to the local community can be seen in many ways. Schools in the surrounding area do not open until Labor Day so the students can attend the fair. Harding, now 22, was one of the local students who benefitted from this accommodation. “Showing at the Grange Fair every year was more than just a one-week event – we are now a part of the distinct Centre County family because of it,” said Harding. Starting a new school year couldn’t have pulled her away from the weeklong family tradition. A study of 200 fairgoers by Meredith Setzman in 2005 asserted that 88% of attendees were there with their families and that they were more likely to know about the fair because of family tradition.

In a 1997 article in the Pittsburgh Post-Gazette, Tom Gibb explained the Grange Fair tradition. Families come to the fair generation after generation. They also start coming very early in life. Local fairgoer Cris Boob attended her first Grange Fair at the tender age of three days!

Another thing that must be passed down through the generations is the canvas tent some of the residents live in. If visitors wanted to move in for the week instead of just visit, they could theoretically rent one of the 14-by-14-foot military green tents pitched side-by-side with 949 others. Realistically, they will never get the chance. The waiting list was cut off at 500 people and an average of two new tents become available each year. “Some bequeath their annual $120 tent reservations in wills,” Tent Secretary Darlene Confer told Gibb in 1997. She also added that she has had to testify as couples fought over the tents in divorce settlements. 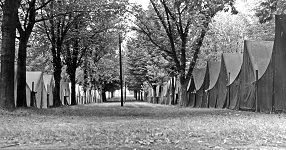 Initially the tents were borrowed from the Pennsylvania National Guard and pitched on wooden platforms, but as the fair grew the floors were paved and the Fair Committee purchased tents of their own. “I remember when we slept on benches or tables. There were no showers. The toilets were wooden seats over holes,” Edna Rockey, 70, tells USA Today reporter Maria Puente. Rockey’s family has been coming for six generations. “I met my husband because his family had the tent next to ours.”

Bringing people together is what the Grange Fair is all about and what it was created to accomplish almost 150 years ago. Horning adds his favorite fair memory as another example of the fair’s ability to impact friendships and relationships. “Last year, a man approached me and asked if I remembered him. I did though it took awhile to recall his name. Joe was in 4-H, helped with a day camp that I organized about 25 years earlier. Now he is married and working in New York. Joe came home so his twin girls could experience the Grange Fair.” The traditions come from the rich history of the Grange Fair and the people who envisioned the immense impact it could have on the community.

On December 4, 1867, the National Grange of the Patrons of Husbandry was formed at a meeting in Washington, D.C. The plan of the founders was to react to the disrepair and difficult economic situation left in the wake of the civil war. Norman Lathbury explained in his book Centre County Grange Encampment and Fair that the intent was:

[F]irst, [to establish] a local community association consisting of neighbors and friends to enable discussion of local issues with candor and tolerance; second, to provide a forum to understand more clearly community needs and mutual methods to resolve them; and third, transforming strangers into neighbors, enemies into friends, and in the process, clarify misunderstandings, remove prejudices, provide a basic level of community education and establish the spirit of cooperation.

As the Grange movement began to grow nationwide, a local Centre County farmer recognized the benefits and power of the Grange and initiated the organization of the Progress Grange in Centre County in 1874. Leonard Rhone accumulated many accolades and professional accomplishments in his lifetime, but Lathbury believes his commitment to the socialization and education of the agricultural community was perhaps the most significant. In December 1878, he was elected overseer of the Pennsylvania State Grange.

From the mind and dedication of Rhone, the Grange Fair began in 1874 as a one-day picnic to introduce rural residents to the Grange organization. From its understated inception, the Grange Fair grew to become a significant event for all of the surrounding areas and became a yearly event. In 1890, the picnic was held at the newly acquired Grange Park located on the west side of Centre Hall and the picnic began to evolve into the encampment and fair it is today. The popularity of all American Grange fairs at this time was booming as they became a social highlight of the year and a main point of information exchange for rural agricultural communities. However, as the country continued to change and become less agriculturally-based, the traditional American Grange fairs began to fade away. With time, improvements were made, more land was purchased, and more people continued to attend Centre County’s Grange Fair. Fortunately, it has held strong as one of the last remaining agricultural encampment fairs in the country. 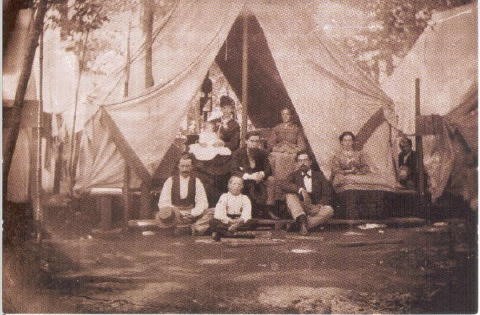 ©grangefair.net
"Tenters" enjoy one of the first Granger's Encampment Picnics.

As encampment fairs disappeared, the Grange Fair continued to thrive. “Cars and better roads killed tenting fairs everywhere else. But [140] years of faster times haven’t even wounded the Centre Hall fair,” Gibbs opined. The people enjoy a week of simpler times and being surrounded by good food, family, and friends. Agriculture still dominates the environment of the fair, but added entertainment in all forms has attracted larger audiences through the years. Puente also concluded that the Grange Fair is “an endearing bit of rural Americana that endures and grows despite the fading farm culture that first gave it life [140] years ago.” Whether you are leaving after an evening of visiting or after a week of living, you will leave with a full stomach, dirt on your shoes, and a smile on your face.