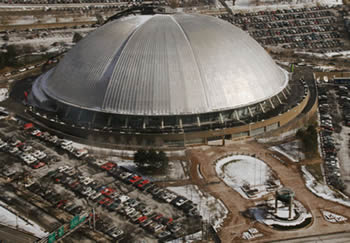 The Stanley Cup has come to Pittsburgh," announcer Mike Lang bursts out in his deep raspy voice, "the 1991 Stanley Cup Champions, the Pittsburgh Penguins. Ladies and Gentlemen, Elvis has just left the building." After an eight goal shut-out over the Minnesota North Stars, the Pittsburgh Penguins, led by Hall of Famer Mario Lemieux, brought the Stanley Cup back to the 'burgh. After deciding that one Cup just did not cut it, the Pens went on to win a second Stanley Cup over the Chicago Blackhawks on May 9, 1992. Since then, the Mellon Arena has been blessed by another figure as notable as Mario Lemieux, Sidney Crosby, who debuted in the NHL on October 5, 2005.

When it first opened in 1961, the Mellon Arena, initially titled the Civic Auditorium, had every trait of a world class entertainment facility. Although the building does not have a great deal of space inside, its history and close seating make up for it. The title "Civic Auditorium" was not exactly accepted by the people of Pittsburgh, and the name was morphed into the "Civic Arena" once the Pittsburgh Post-Gazette started to use that title. Nicknamed "the Igloo" after its remarkable resemblance to an igloo and the correlation that exists between "penguins" and "igloos," the Civic Arena's naming rights were leased by Mellon Bank of Pittsburgh, in 1999 for a 10 year agreement at a cost of eighteen million dollars. According to Mark Belko of the Pittsburgh Post-Gazette, the naming rights lease was extended another year by Mellon to insure that the Arena's last years before being replaced by a new arena would still be remembered as the Mellon Arena.

Built originally by Abe Wolk to give the Civic Light Opera a weatherproof place to perform, the arena's most notable feature may be its retractable roof. Around the same time the arena was being talked about, the city was discussing ways to honor war veterans. Wolk suggested an open air theater. He commented later on being questioned by a reporter what would happen in the case of rain, "I had to think fast. I just put my arms over my head, moved around a little, and said that we are going to have a movable roof." He continued, "Of course, I wasn't thinking of a movable steel roof atop a $22 million auditorium in the middle of the Lower Hill. I was hoping for something — anything over the audience."

Patricia Lowry, an architecture critic of the Pittsburgh Post-Gazette, noted that comedian Carol Burnett stood on the stage of Pittsburgh's new Civic Auditorium on the night of July 4, 1962. As the dome peeled open for the first time in front of an audience, Burnett announced "Ladies and Gentlemen, allow me to present... THE SKY!" Soon enough, the wind poured in through the open roof and rumbled the microphones, and Burnett was in desperate need of a coat. Unfortunately for Wolk and the Pittsburgh Light Orchestra, the retractable roof that was intended to make it a great theater actually made it a terrible theater.

The Mellon Arena's operators knew the roof could not be opened when it rained, and they learned it also could not be opened when the wind blew over seven miles per hour. It was not just weather that haunted the arena's ability to host the light opera; the open roof caused a nightmare for acoustics and the wind generated a continuous headache by blowing over scenery. The dome provided no place to hang lighting, sets, or amplifiers, and trying to keep an open arena air conditioned proved to be more expensive than predicted. 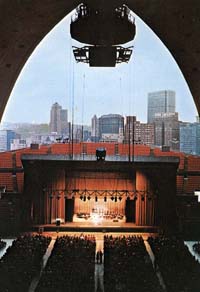 The arena was built as an all-purpose facility for the light opera that would also be used by the Pittsburgh Hornets hockey team, the Ice Capades, and other events such as basketball and circuses. After enough problems surfaced, it became evident that sports and theater couldn't take place within the same facility. The Pittsburgh Light Opera moved in 1969 from the Mellon Arena to the Heinz Hall across town.

Although the Mellon Arena did not live up to early expectations or to its costly budget, it managed to make news reports around the world. Headlines read across the globe, "The World's Biggest Dome, and It Moves!" Again quoting Lowry, she said "not only was [it] the brightest bauble in Pittsburgh's Renaissance but also its boldest engineering feat." The arena will indefinitely be a part of Pittsburgh's history.

The oldest National Hockey League (NHL) venue still in use, The Mellon Arena's stainless steel dome has glimmered and gleamed for over 40 years. As if the shape of this unique arena were not eye-opening enough, the dome was designed to open or close in just two minutes. The Mellon Arena was the first retractable dome, and it was the largest dome in the world at the time it was built. It kept that record until the Houston Astrodome was built three years later. The steel dome weighs almost four thousand tons and has a diameter of a little over four hundred feet. To cover the entire outer surface of the dome, it took a whopping 166,000 square feet of stainless steel sheeting.

Although the Penguins did eventually take over the lease, the first hockey team to call the Mellon Arena home was an American Hockey League, a minor league, affiliate of the Detroit Red Wings called the Pittsburgh Hornets. After a few seasons, the Hornets were taken over by the Pens, but not before they won the Calder Cup for their league championship in their final season. The primary draw to the Mellon Arena, the Pittsburgh Penguins settled in the arena in the fall of 1967. Since then, the Mellon Arena has hosted approximately forty games every year except for the labor stoppage in the 2004-2005 season. That totals to about sixteen hundred games as of the end of the 2007-2008 season.

The Mellon Arena also hosted the NHL All Star Game and Skills Competition in 1990. The only players in the event that could call the Mellon Arena home at that time, Mario Lemieux and Paul Coffey, were both eventually inducted into the Hockey Hall of Fame. Lemieux's induction, different from most, came as a result of a waiver of the three year waiting period and took effect immediately after his retirement.

Mario Lemieux spent seventeen seasons with the Penguins at the Mellon Arena, and when he retired he gave $30 million to the poorly-managed Penguins to save them from bankruptcy. Along with his generous offer, he sought to recover his money by converting it to equity and buy the franchise which made him the first athlete to buy the team that he played for. Until the day the Mellon Arena is replaced, Mario Lemieux's number, sixty-six, will hang from the ceiling.

Following Mario Lemieux's tenure at the Igloo, Sidney 'Sid the Kid' Crosby was drafted by the Penguins in the 2005 NHL draft. With admittance even from the Great One himself, Wayne Gretzky claimed that Crosby has the best chances to break his records. Crosby played a major role in the Penguin's path to the Stanley Cup finals in the 2007-2008 season. 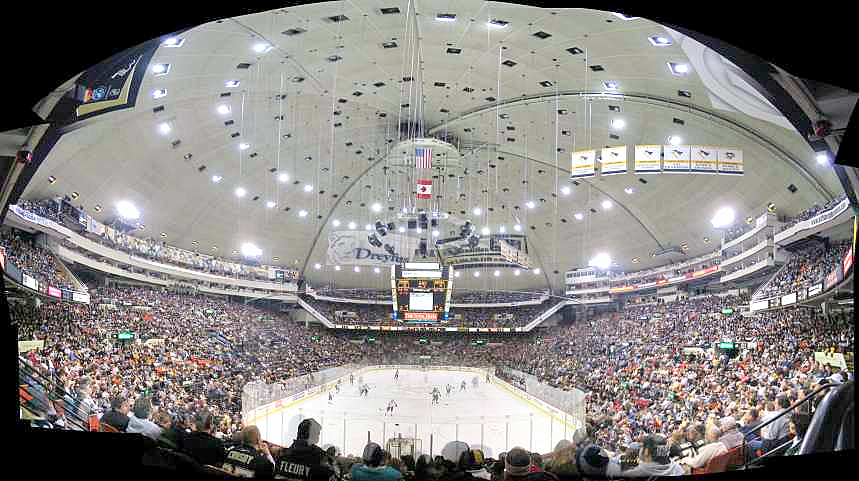 As if that were not enough for the arena, the Igloo offers roughly 160 other events such as concerts, circuses, and a variety of family shows such as Disney on Ice. The Mellon Arena has hosted music legends like Frank Sinatra, The Rolling Stones, and six sold out nights of Garth Brooks and the Grateful Dead.

The first show hosted by the Mellon Arena was the Ice Capades on September 19, 1961. The Beatles played in 1964, and Elvis Presley played in 1973. The Page/Plant concert on March 25, 1995 registered the highest attendance ever in the Mellon Arena until a WWF wrestling match on January 30, 1999. In addition to the musical performances, when the roof remains closed, the Mellon Arena hosts the Harlem Globetrotters, the Ringling Bros., and Barnum & Bailey.

The Mellon Arena was also featured up on the big screen. In 1995, Sudden Death showed across the country. The movie, a Die Hard knock-off, featured Jean-Claude Van Damme saving a Pens crowd from a ruthless group of terrorists with plans to blow up the arena during a Stanley Cup finals game.

The Igloo was put forward for consideration as a city historic structure by Pittsburgh's two preservation groups, the Pittsburgh History & Landmarks Foundation and Preservation Pittsburgh. The Pittsburgh Post-Gazette claims that the arena's status as an architectural and engineering landmark could have made it eligible for the designation of a historical landmark.

Despite these efforts, however, plans for a new arena were released on November 13, 2007 by the Penguins. Claimed by Wayne C. London, the arena designer, "We are picking the best of the best and putting it in this building." The Mellon Arena's successor will offer a high-definition video scoreboard, wider and more comfortable seats, and more spacious concourses. Upon the demolition of the historic Mellon Arena, a development plan that includes parking garages, office buildings, restaurants, and even a city park.