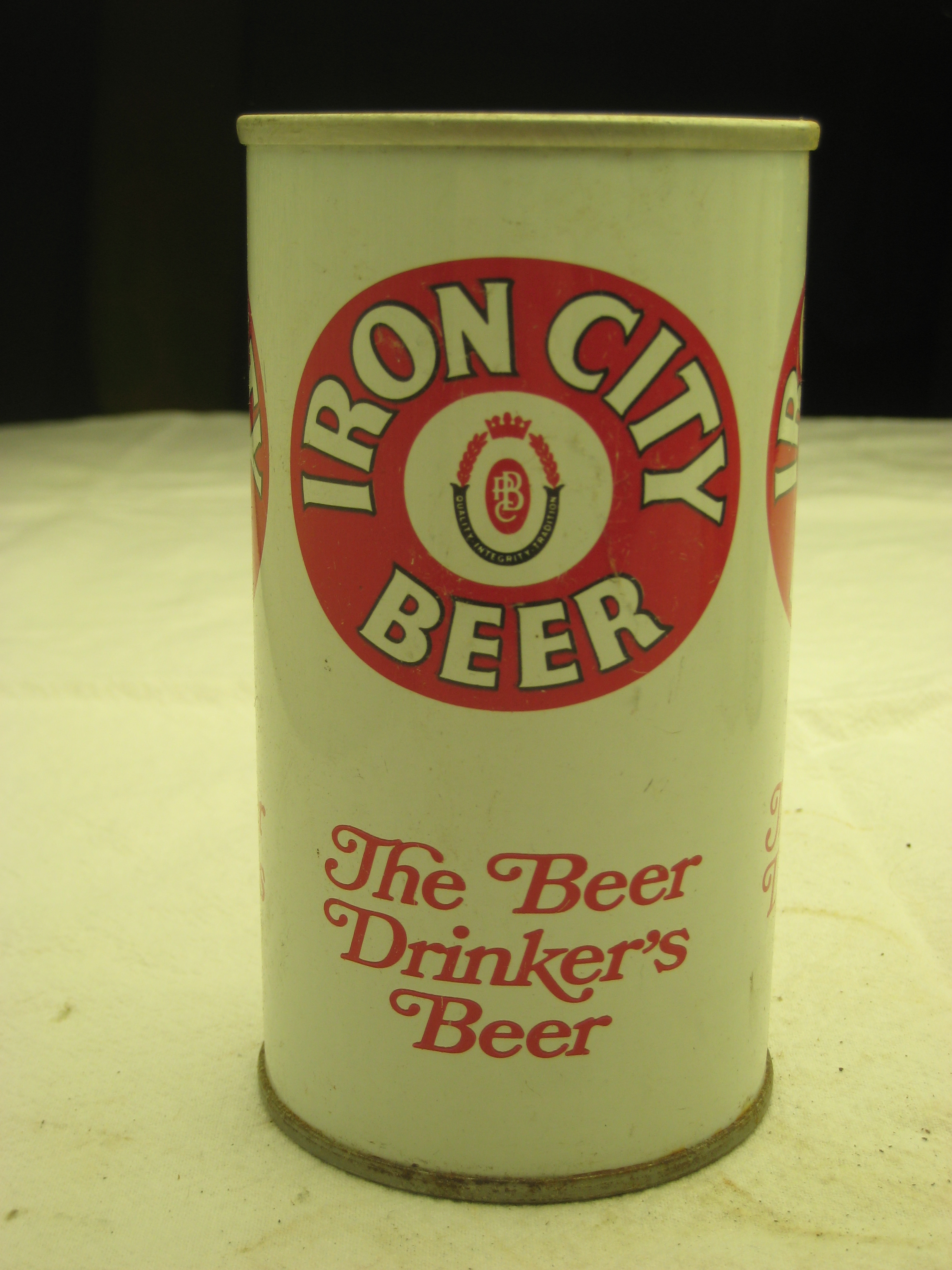 Clare_and_Ben
Iron City Beer has long been a signature product of Pittsburgh.

If you ask a native Pittsburgher what beer they grab while watching the “Stillers,” they will likely answer “Arhn City.” Not only is this local brew served at the local sports venues, it is also found on tap at nearly every bar in the area. Although some Pittsburghers are upset about the company’s recent move to Latrobe, Westmoreland County, most loyal customers are still drinking Iron City just as much as they were before. Since 1861, the Iron City Brewing Company has been a staple in the Pittsburgh brewing industry and is one of America’s oldest breweries. The company’s mission has always been to brew quality beers, innovate, and maintain high demand in Pittsburgh and surrounding regions. Iron City Brewing Company is also known for many industry firsts, including the “snap top” can, the twist-off re-sealable bottle top, draft beer packaged in cans, aluminum beer bottles, and the original “light beer.”

In 1861, Iron City Brewing Company opened its doors on 17th Street, but quickly outgrew this brewery and moved to its well-known location on Liberty Avenue and 34th Street in the Lawrenceville neighborhood of Pittsburgh. The recognizable red brick building that stands four-stories tall remains an icon for the brewery, even after the company relocated. Many of the local steel workers fell in love with ICB shortly after they opened the factory. Iron City became more than just a local beer—it was a city-wide tradition.

Iron City began to capture even more of the market in the Pittsburgh, and would become top seller. After the company’s move to the brick building on 34th street in 1861, another building was built next to it, further expanding the company’s facilities. Over the next two decades, the brewery continued to grow. When the brewery first moved to Lawrenceville, its capacity was about 10,000 barrels per year. With increased facilities and equipment, production increased to 50,000 per year by 1886. Iron City Brewing Company had made a name for itself and was known all over the country in the brewing industry. It was estimated that the brewery was worth $150,000—an impressive total for the industry at that time. 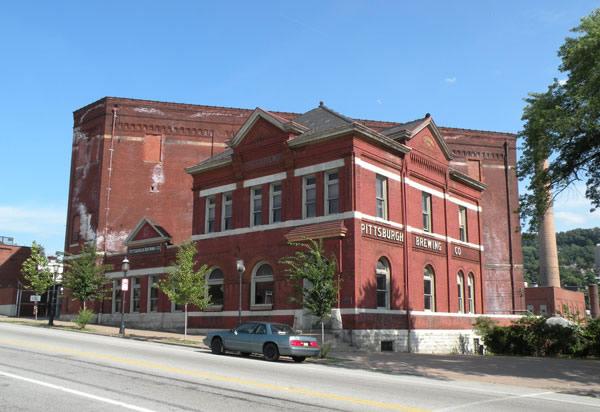 Lee Paxton
The Lawrenceville section of Pittsburgh was home to the brewery's headquarters for many years.

As the century came to a close, breweries in the Pittsburgh area merged to form the Pittsburgh Brewing Company (PBC). The twelve local breweries included: Wainwright; Phoenix; Keystone; Winter Brothers; Phillip Lauer; John H. Nusser; Eberhardt & Ober; Hippely & Sons; Ober; J. Seiferth Brothers; Straub; and Iron City. In addition to these initial twelve breweries, nine more were included in the merger. Now, Pittsburgh Brewing Company was Pennsylvania’s largest brewery and third largest in the nation with combined assets worth an estimated $11 million. For the next three decades, PBC boasted a brewing capacity of more than one million barrels per year.

The onset of Prohibition in 1920 brought serious strain to breweries across the nation. Pittsburgh Brewing Company, however, was able to survive by using its facilities to produce ice cream, soft drinks, and non-alcoholic “near-beers.” When Prohibition was repealed in 1933, PBC was one of only 725 breweries in the U.S. still operating.

The year 1962 marked the first historic product for Iron City Brewing Company: the snap-top can. This was an industry phenomenon that continues to be wildly popular today. The snap-top was created by Alcoa, the nationally-known aluminum production company in Pittsburgh, and first appeared on cans of Iron City Beer. 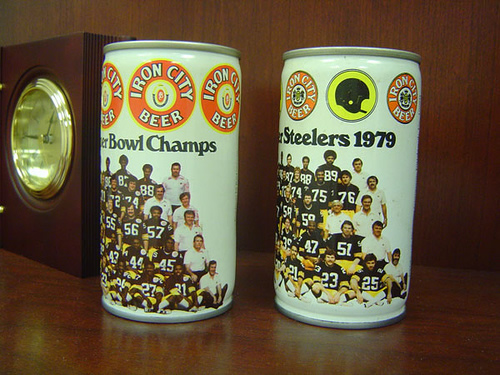 TJ Hanton
Promoting local teams, as with the 1979 Steelers, was a frequent occurrence with Iron City Beer.

Another ICB innovation was the low-carbohydrate light beer, which they named Mark IV. Mark IV was the first “low-carb” beer of all the light beers which were becoming popular in the 1970s. Other new ICBC beers included Robin Hood Cream Ale and Augustiner, still being produced by Iron City Brewing today.

Iron City Brewing Company is also known for printing sports team’s icons on beer labels. In 1970, ICBC produced commemorative Super Bowl cans for the Pittsburgh Steelers. The I.C. Light campaign focused on younger drinkers in the area and managed to capture two thirds of the light beer market in Pittsburgh. Many Pittsburghers today can still recall the campaign slogan: “Hey! Give me an IC Light!” with a catchy disco twist –perfect for the seventies. Shortly after this, the brewery reached its peak production of one million barrels per year.

Iron City had not only made a name for itself in the brewery industry, but it created a customer base unlike any other company. Their customers were proud Pittsburghers. Rich Malter Jr, who worked at the brewery until its move to Latrobe, recalls in an article for the Pittsburgh City Paper that while growing up, the only two beverages in his house were “Iron City and water.” Even as some factories struggled with operations, Iron City Brewery held strong sales and saw little decline.

But in 1985, Iron City began to spiral downward, with a string of incompetent owners. Becoming a publically traded company, Australian billionaire Alan Bond outbid ICBC’s president and partner. Bond was criticized for not wanting to keep the local-feel intact. Instead, he wanted to take Iron City Brewing Company national, operating competitively with companies like Coors and Anhueser-Busch. Later found guilty for fraud, Bond lost the company and spent four years in jail. 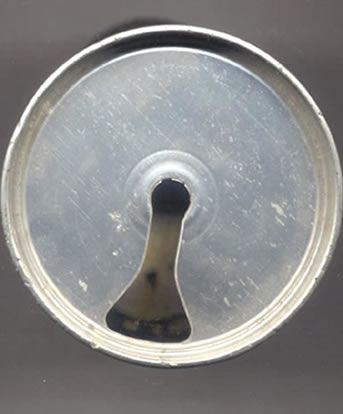 Michael Carlow then bought Iron City Brewing Company, but had little experience in breweries. Carlow was involved in a check-kiting scheme with PNC bank, resulting in an eight year jail sentence. The next owner, Joe Piccirilli, was also inexperienced at brewing and, like Bond, wanted to make ICB a national company. In an interview with the Pittsburgh City Paper, beverage-industry attorney Chris Hoel said, “I worked for [Iron City] in the 1980s when that brewery was still being run by people who knew what they were doing. But over the years I have watched a parade of ineptitude destroy the brand, and too many crooks spoiled the broth.” From the start of Bond’s ownership, production at Iron City Brewing dropped from one million barrels per year to a mere 500,000.

These issues all led to Iron City Brewing Company’s recent fall, as well as its filing for bankruptcy in 2007. With unpaid water and sewer bills, ICBC could no longer support itself and remain in its well-known Liberty Avenue red-brick factory. The company took over the Rolling Rock brewing facilities, approximately forty miles away in Latrobe. Many old customers predict that this will be the end of Iron City, but the company still strives to remain a player in the Pittsburgh market. Rich Malter Jr., a third-generation ICBC bottler until the company’s move to Latrobe said to the Pittsburgh City Paper, “I drank nothing but Iron City for more than 35 years.” As he said this, he took a cold swig of his Miller High Life.

The Center wishes to thank George Shaw at the Breweriana Collector's Store for his assistance illustrating this article.