It's the End of the World as We Know It: Celestia 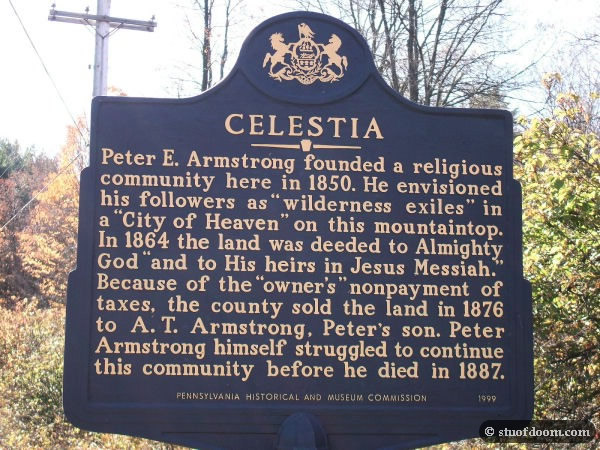 stuofdoom.com
One of the few surviving signs of the Celestia religious commune is this historic marker in Sullivan County.

Forces of influence in the world seem to be changing, there are whisperings of an end coming, people are gathering and anxiously awaiting a certain day… but it’s not the year 2012. It is 1844. The modern hype surrounding 2012 is far from the first time in history when masses of people feared that the end of the world was near. Another such time was October 22, 1844.

Tuesday, October 22, 1844 is the day that preacher William Miller predicted would be the day of the second coming of Christ, and the end of the world. Traditional Millenarianism stems from Protestant theology and refers to a prediction in the Bible’s Book of Revelation that a perfect age would come at the end of the millennium, and in this age Christ would come to Earth. The North American Millenarian movements, like that of William Miller, stemmed primarily from Puritan beliefs. The North American Millenarians were particularly zealous as they believed that they were brought to North America to work for God and create a “new kingdom” there. However, this highly anticipated day turned out to be a day of disappointment, as Christ did not return, and the world continued. Followers of William Miller, up to nearly fifty thousand people, were forced to seek other religious callings when the day passed. 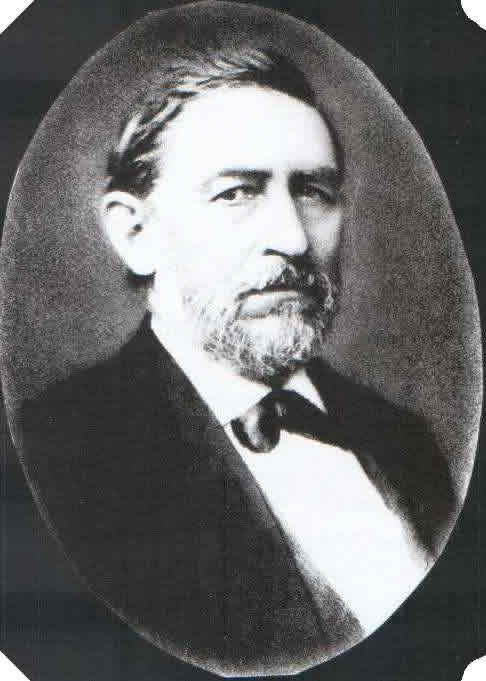 Used by specific permission of Robert E. Sweeney and the Sullivan County Genealogical Web Page. All rights reserved. Not to be copied or reproduced without the written consent of Robert E. Sweeney
Peter Armstrong, founder of Celestia, was not discouraged by the world continuing in 1844.

One of those followers was Peter Armstrong, who was not discouraged when October 22, 1844 came and passed. Instead, he turned to the pages of the Bible to more fully understand the Prophesies that described the second coming of Christ. Armstrong determined that the second coming of Christ could not occur until the “earthly sanctuary had been purified,”an event that he did not actually predict to occur for a thousand years. However, Armstrong was focused on taking steps towards creating an earthly sanctuary to mirror the Kingdom of Heaven.He focused on Isaiah 40:3 which states, “In the wilderness prepare ye the way of the Lord.” In 1850, with the goal of creating a new Zion, Armstrong purchased 181 acres of wilderness in the mountains of Sullivan County, Pennsylvania.

Sullivan County was (and still is) a picturesque plot of land, consisting of breathtaking hills, calm lakes, and rolling brooks. The land was originally owned by the Lenni Lanape and Esopus Indians. The land was purchased from the Indian tribes through grants such as the Minisink grant and the Hardenbergh grant in the seventeenth century. Efforts to settle the territory were not made until after the Revolutionary War. The country was named after General John Sullivan, the hero of the march through the Indian country of 1779. The two most important events that created current-day Sullivan County were the construction of the Newburgh and Cochecton Turnpike and the building of the Delaware and Hudson Canal. Work, however, was not what brought Peter Armstrong to Sullivan County. Armstrong was drawn to the tranquility and overall aesthetic appeal of its wilderness. 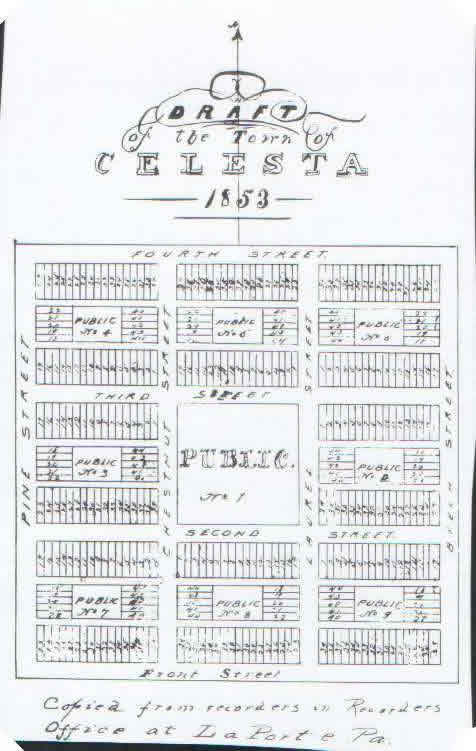 Used by specific permission of Robert E. Sweeney and the Sullivan County Genealogical Web Page. All rights reserved. Not to be copied or reproduced without the written consent of Robert E. Sweeney
Armstrong sold some 300 lots of land in Centralia to those faithful who wished to prepared the way of the Lord.

Armstrong named his land Celestia and envisioned it to be an image of heaven on earth. The community was to be governed by four objectives, as stated in Celestia’s newspaper, The Day Star of Zion and Banner of Life. The first objective was “to build a ‘House’ for the God of Israel, not only of earthly material, but also of ‘living stones’ set up as an ensign on the land to an unbelieving world and a world-conformed church. Also for a place of refuge against impending judgments.” The second objective was “to advocate and organize a Divine Communism of ‘Faith, Love and Purity’ which is ‘the bound of perfectness’ and outburst of the Kingdom of Heaven; and thus hasten the coming of the world’s Redeemer”; the third was “to show how we may enter into life without seeing death and corruption, by keeping the commandments of God in the faith and sayings of Jesus”; and the fourth objective was that “the nature of man, what he loses through Adam, and what he gains through Christ, with every other Bible subject of what we consider present truth and duty, shall be the mission of the Day Star.”

The Celestial Religious Commune soon grew to cover 600 acres. The town itself was laid out in 20x100 foot lots. By 1853, Armstrong had sold 300 such lots to the faithful at $10 per lot. To live in Celestia, Armstrong mandated that people have a sincere faith in heart and spirit. Citizens of Celestia were required to have a full commitment to God and the community and to abandon their property and sinful ways. An important facet of the Millenarian belief was that a great battle of good and evil would take place on Earth. At the end of the Battle, the good would be sanctified and carried up to heaven, and the evil would burn. Armstrong planned to build a holy temple in Celestia, as mentioned in the community’s first objective, which would be a place of refuge for those who believed in God’s divine order for salvation. Armstrong did not only designate the community to God by means of faith, but also in legal documents, deeding the 600 acres to “Almighty God, who inhabiteth Eternity, and His heirs in Jesus Messiah.” 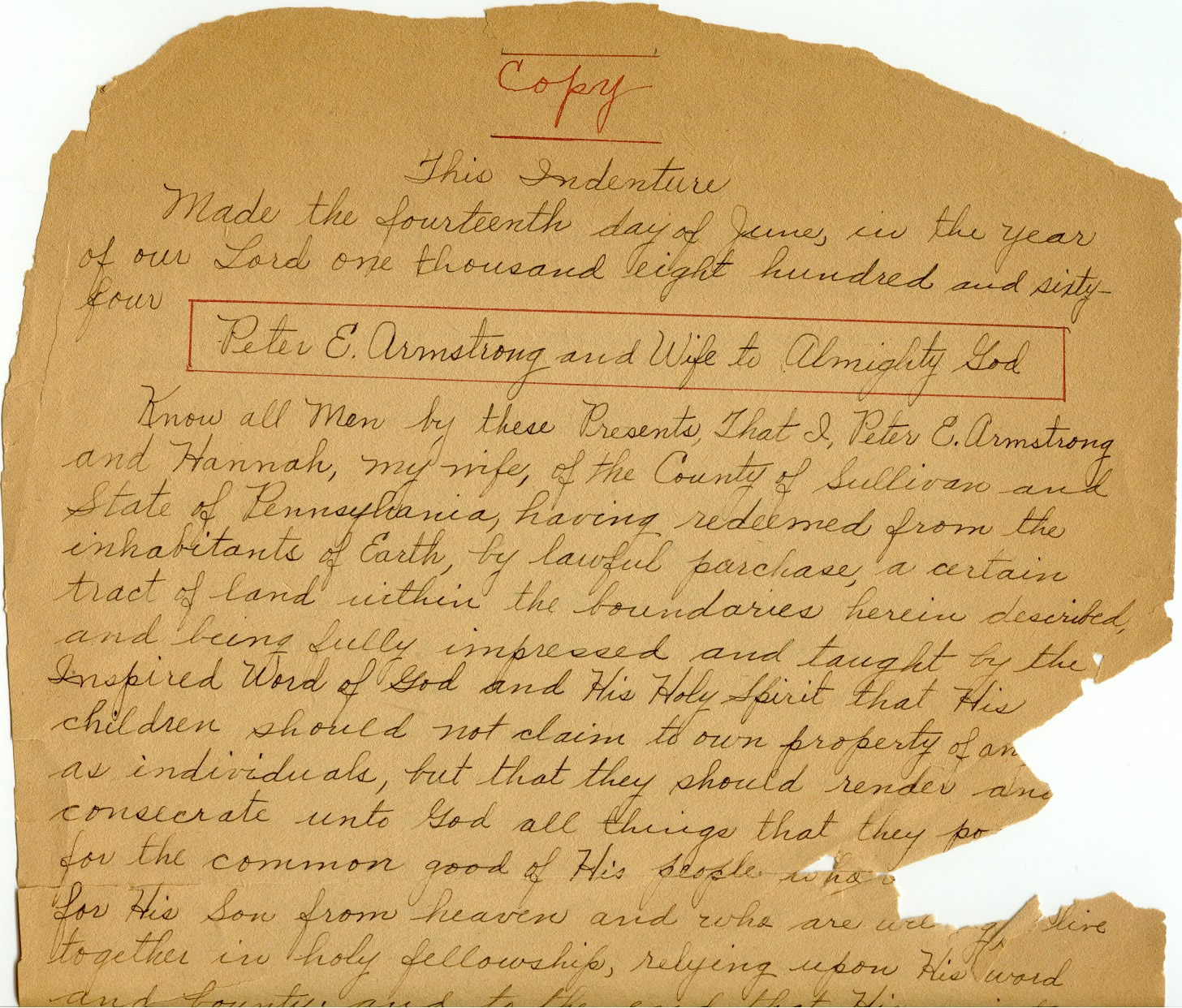 By deeding the land, essentially, to God, Celestia was unique in its time period. Armstrong claimed the residents of Celestia to be peaceable aliens and wilderness exiles, and intended that the people of the community “may enter into life without seeing death and corruption” as stated in the community’s third objective. When the first member of Celestia received his draft notice in the Civil War, Armstrong wrote a letter to President Lincoln, asking for the members of Celestia to be exempt from the draft. Because of the nature of the community, the president agreed to Armstrong’s wishes. Armstrong took this to be a sign from God of goodwill towards Celestia. However, it turned out to be a contributing factor to the demise of the Celestial Religious Commune.

Celestia’s unique arrangement attracted people who were seeking to avoid the draft rather than build a divine community. Eventually the religious vigor that Armstrong felt towards his plot of land in Celestia was tarnished by the influx of less-than-pious draft-dodgers. He attempted to relocate his religious commune in 1872 at Glen Sharon, near Sonestown, Sullivan County. The zest that was present in early Celestia was nearly gone, however, and both towns declined.

Furthermore, in deeding the land to “Almighty God” Armstrong intended the land to be considered sacred, thus not subject to property tax. Unfortunately, the Sullivan County government disagreed with this idea. In 1876, the County forced a land sale to pay the back property taxes it deemed the commune owed. Armstrong’s son bought the land, but the dream of Celestia came to an end within a few years. Peter Armstrong himself died on June 20, 1887, in Celestia where only a few inhabitants remained. The once thriving religious community was officially over, not even a half century after it was created.

Although it was short-lived, the Celestial Religious Commune was a unique event in Pennsylvania’s history. The struggle to live an ideal is part of the beauty of Celestia. The legacy of Celestia is most eloquently described in this poem featured in Celestia’s newspaper, The Day Star of Zion and Banner of Life: 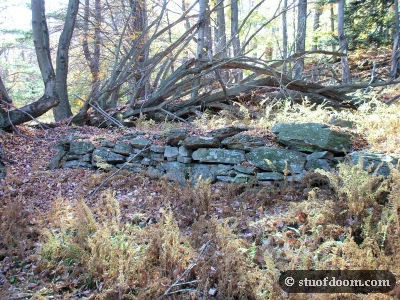 stuofdoom.com
Rock walls like these and other foundations are all that remain of Peter Armstrong's religious experiment.

Shine on thou bright celestial star
Let thy pure beams glance out afar
With generous and fervid glow,
Dispelling darkness, sin and woe.
The gospel-banner is unfurled,
A beacon light to all the world,
To guide the erring to the way
That leads to heaven’s eternal day.
To beckon pilgrims ever on
Until life’s victory is won;
To urge them upward to the goal,
The hope of every ransomed soul
And wean them from this earthly sod,
To wait the coming of their God.
Blessed be thy place where all may rest,
Who wear the armor of the blest.
And blessed be those Christians too,
That number with thy faithful few.
Oh! rich will be their sweet reward
In the soon coming of our Lord.
Thy Day Star, like a carrier dove,
Has proved a messenger of love.
May e’er its faith, hope, truth and right,
Spring upward from thy living fount,
Oh! fair Celestia of the mount.