Jazzin' Up the Keystone State

Billie Holiday. John Coltrane. Stan Getz. Tommy Dorsey. Any jazz enthusiast, or even someone who is only vaguely familiar with the musical genre, certainly recognizes some of the names of these greats. But did you know that all of those talented jazz legends were from the state of Pennsylvania? When one thinks of the geographical centers of jazz, New Orleans and New York first come to mind. However, some of the greatest jazz musicians and composers were born, lived and performed right here in Pennsylvania. 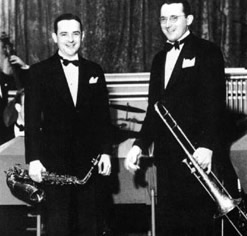 There are many different styles and colors of jazz and Pennsylvania has had claim and fame in each one. Starting in the early 1920s, when the style of Big Band was the "pop" music of its time, The Dorsey Brothers, Jimmy and Tommy, became legends in big band and jazz. Jimmy was a virtuosic clarinet and saxophone player as opposed to Tommy who was a trombonist second to only Glenn Miller in fame. The Dorsey brothers were born in the heart of the anthracite coal region of Schuylkill County in 1904 and 1905, respectively. Their father, a music teacher in the town encouraged the boys to play as much and as often as they could. After developing a love for the relatively new musical style of jazz, the boys traveled to Scranton to play the local jazz orchestra before forming their own big band in the 1930s where they produced such classics as "I'll Never Smile Again" and "Opus One." Another famous Pennsylvania Big Band figure, Earl "Fatha" Hines, was born in Pittsburgh and played jazz piano during the era of Big band. 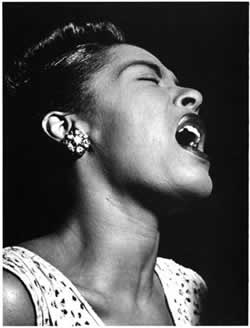 As Big Band music evolved, vocalists became just as important as the instrumentalists who backed them. In 1915, Eleanora Fagan, one of the most famous names in jazz was born in Philadelphia, Pennsylvania. However, we know her better as Billie Holiday. Fagan changed her name to honor an actress she admired, Billie Dove, and took the last name of her father, Clarence Holiday. Billie Holiday eventually wound up in New York City after spending time in both Philadelphia and Baltimore in her youth. Trying to stay out of trouble, she began singing at clubs and bars to make ends meet. In 1933, she was discovered by a talent scout and was swept up in the jazz scene and began her very prolific composing and recording career. She was known for her unique vocal performances and rarely performed a song the same way twice. Like most jazz performers she firmly believed that "If you copy, it means you're working without any real feeling. No two people on earth are alike, and it's got to be that way in music or it isn't music." She is most remembered for her performance and composition of such songs as "God Bless the Child," "Billie's Blues," and "Long Gone Blues." She laid the foundations for performers to be free with melodies and take more musical liberties with existing music. Her performances of George and Ira Gershwin's "Summertime" from Porgy and Bess thrust her into the spotlight for this very reason. Other important Pennsylvania jazz vocalists included Bessie Smith, who often played with Louis Armstrong also called Philadelphia home for many years, and Billy Eckstine, who led his own band and had hits with "A Cottage for Sale" and "Prisoner of Love." 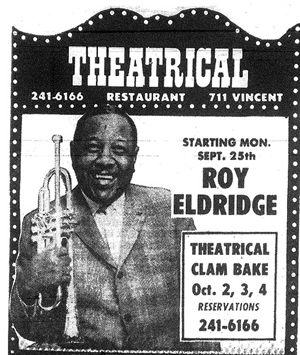 ClevelandSGS, flickr
A poster advertizes a gig for Roy Eldridge.

While Billie Holiday was born in Philadelphia, on the other side of the state, in Pittsburgh, a budding musician was taking shape. Roy Eldridge, born in 1911, was just picking up his first instrument at the tender age of 4. While he started playing the drums, he grew into one of the most influential jazz trumpet players of all time. He has inspired greats such as Dizzy Gillespie and Maynard Ferguson. He also performed in a band in support of fellow Pennsylvanian, Billie Holiday for many years and many recordings. After World War II, Eldridge was a key member of Jazz at the Philharmonic, in Los Angeles, California. Norman Granz, the producer and creator of the group said Eldridge embodied the spirit and style of Jazz: "Every time he's on he does the best he can, no matter what the conditions are. And Roy is so intense about everything, so that it's far more important to him to dare, to try to achieve a particular peak, even if he fails in the attempt, than it is to play safe. That's what jazz is all about." Eldridge's recording of "Trumpet Blues" with his protégé Dizzy Gillespie is one of the most impressive displays of jazz virtuosity for the trumpet. Trumpet players across the globe study and listen to the recording for the definition of jazz style. Eldridge's own recordings of "Roy's Son," which he also composed, and "The way you look tonight" helped him earn a place in jazz history. Pittsburgh also produced one of the most prolific composers in Jazz history as well. Billy Strayhorn, while he was part of Duke Ellington's band, composed the very famous melody "Take the A Train," among many other works. 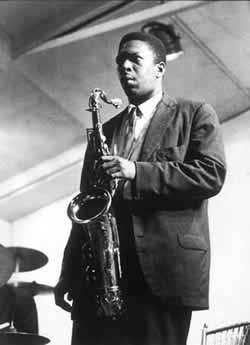 When the evolution of jazz took a hard left turn into the free form and sporadic styles of "bebop" and "hard bop" in the 1940s and 1950s, along came a young tenor saxophone player named John Coltrane. Born in North Carolina in 1926, and raised in Philadelphia, he became one of the most recognizable names in jazz history. His work with Miles Davis, Thelonious Monk, and his own quartet earned him a posthumous Special Citation from the Pulitzer Prize Board for "masterful improvisation, supreme musicianship and iconic centrality to the history of jazz," in 2007. Some of his most famous pieces include a performance with Duke Ellington on "In a Sentimental Mood" and his rendition of Gershwin's "But Not For Me." John Coltrane, in his liner notes to Meditations, said: "There is never any end... There are always new sounds to imagine; new feelings to get at. And always, there is the need to keep purifying these feelings and sounds so that we can really see what we've discovered in its pure state, so we can see more clearly what we are. In that way, we can give those who listen to the essence the best of what we are." He was always exploring whether it be in music or what he considered his home state of Pennsylvania. He often spoke of the beauty of the land here and how he put the colors and life of the landscape into his jazz. Stan Getz, another tenor sax player, was also very popular and recorded much work around the same time. Bebop percussionist Art Blakey and his band, the Jazz Messengers, were very influential on jazz.

The rich history of jazz in Pennsylvania does not end there. However there is a very strong need to study these famous musicians by the jazz community. "Jazz is an art form that depends on its antecedents; there must be respects for the people that have gone before," Jon Hendricks, one of the living legends of jazz vocals said about studying the history and structure of jazz. Much like studying the historical figures and leaders of Pennsylvania, aspiring jazz musicians from all across the world are looking toward the musicians of the past. It is inspiring to young musicians especially when they see that there are jazz musicians from their home state. While further evolution of Jazz continues worldwide, expect more legends to come from the incredible and diverse culture that spans the entire state of Pennsylvania.