This is KDKA of the Westinghouse Electric and Manufacturing Company in East Pittsburgh, Pennsylvania. We shall now broadcast the election returns. We are receiving these returns through the cooperation and by special arrangement with the Pittsburgh Post and Sun. We'd appreciate it if anyone hearing this broadcast would communicate with us as we are very anxious to know how far the broadcast is reaching and how it is being received... 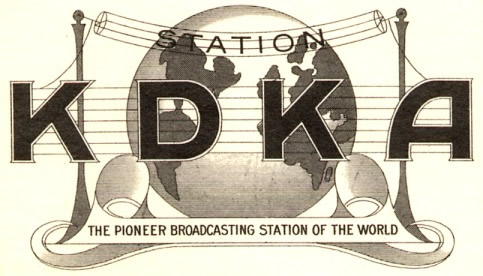 KDKA Radio, Pittsburgh
KDKA's logo from the 1920s. Already they were known as broadcast pioneers.

So began the first broadcast by a commercially-licensed radio station. KDKA went on the air in Pittsburgh as the world’s first commercially licensed station on November 2, 1920. While amateur ham radio operators and military communications had been sending messages over the airwaves for several years previously, Westinghouse Electric’s KDKA was the first official station, starting a radio boom across the nation and the world.

Westinghouse Electric and Manufacturing Company saw the potential of radio, which at the time was mainly used as a means of two-way communication and referred to as wireless telephony, to broadcast programming to the general public. Previously radio had been relegated to amateur operators, but the practice had dropped in popularity after the U.S. military commandeered all the airwaves for military use during World War I. Harry P. Davis, Westinghouse vice-president, saw radio as more than “a confidential means of communication,” and realized radio “was an idea of limitless opportunity,” as quoted in Inventing American Broadcasting 1899-1922. He saw radio as a way to communicate with vast numbers of people over a large geographic area instantaneously. 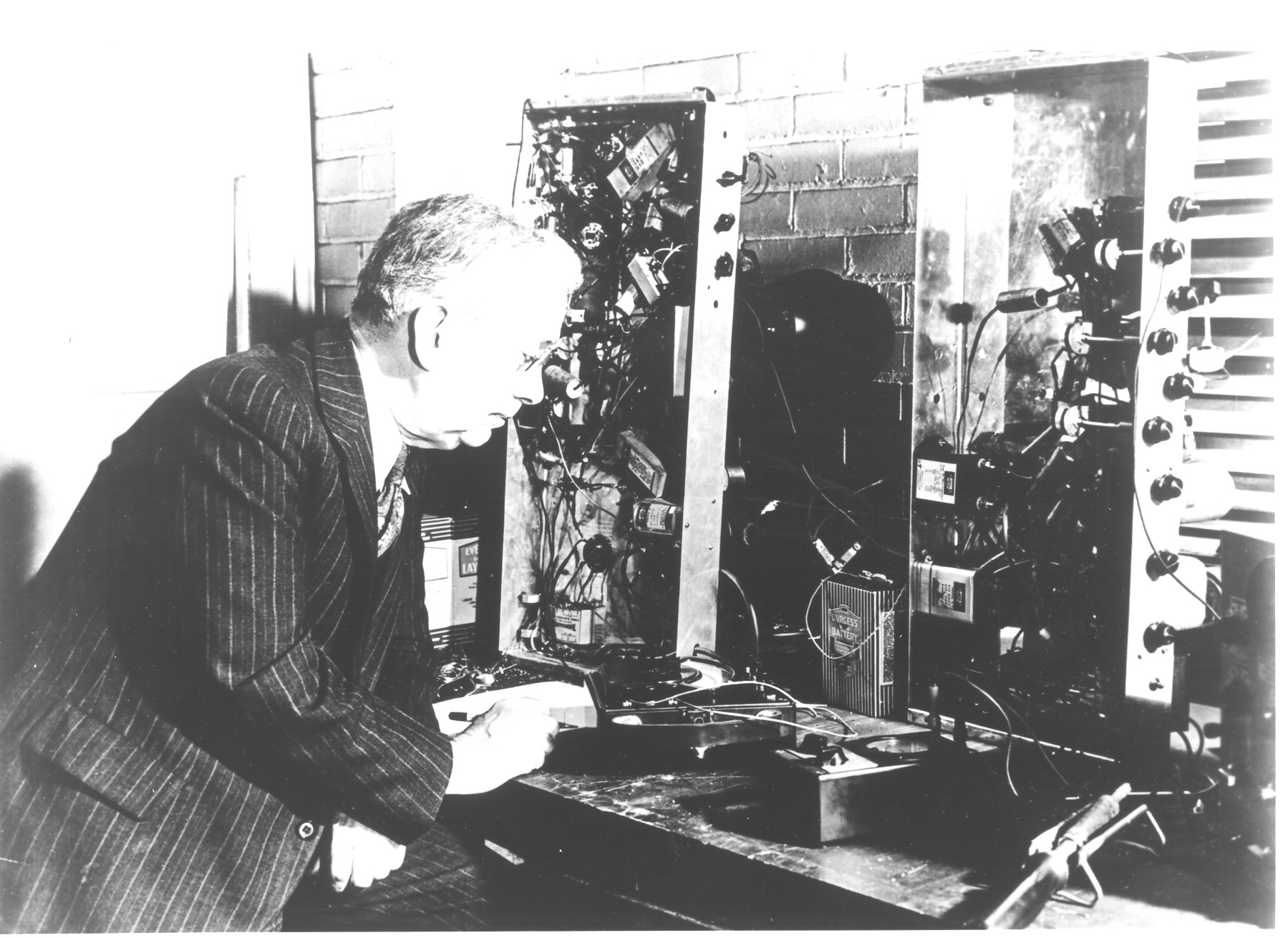 KDKA Radio, Pittsburgh
Frank Conrad, one of the fathers of radio, examines wiring necessary for broadcasts.

Assistant Chief Engineer Frank Conrad had already been making broadcasts via ham radio in the immediate Pittsburgh area, but there was little demand for radio receivers outside that relatively small group of aficionados. Westinghouse wanted to create a demand by having regularly scheduled broadcast programs across a variety of subjects, having seen Conrad’s local success broadcasting music, talking, and giving sports scores. So a small shack was built on the roof of a Westinghouse building in Pittsburgh, complete with antenna and a 100-watt transmitter. On October 27, 1920, the Department of Commerce issued the first commercial radio station license under the call sign KDKA. On November 2, 1920, Leo Rosenberg broadcast the Harding-Cox presidential election returns, marking the first broadcast by a licensed radio station.

According to Orrin Dunlap Jr., a communications technology historian, this broadcast started “a craze that swept the country to become a vast new industry.” KDKA’s transmitter was soon upgraded to 500-watts, allowing nightly broadcasts to reach audiences across most of the eastern United States and into Canada. This was just the beginning, as radio popularity would soon explode as a result of KDKA’s pioneering steps in broadcasting. By 1922, there were more than five hundred licensed stations on the air throughout the nation. 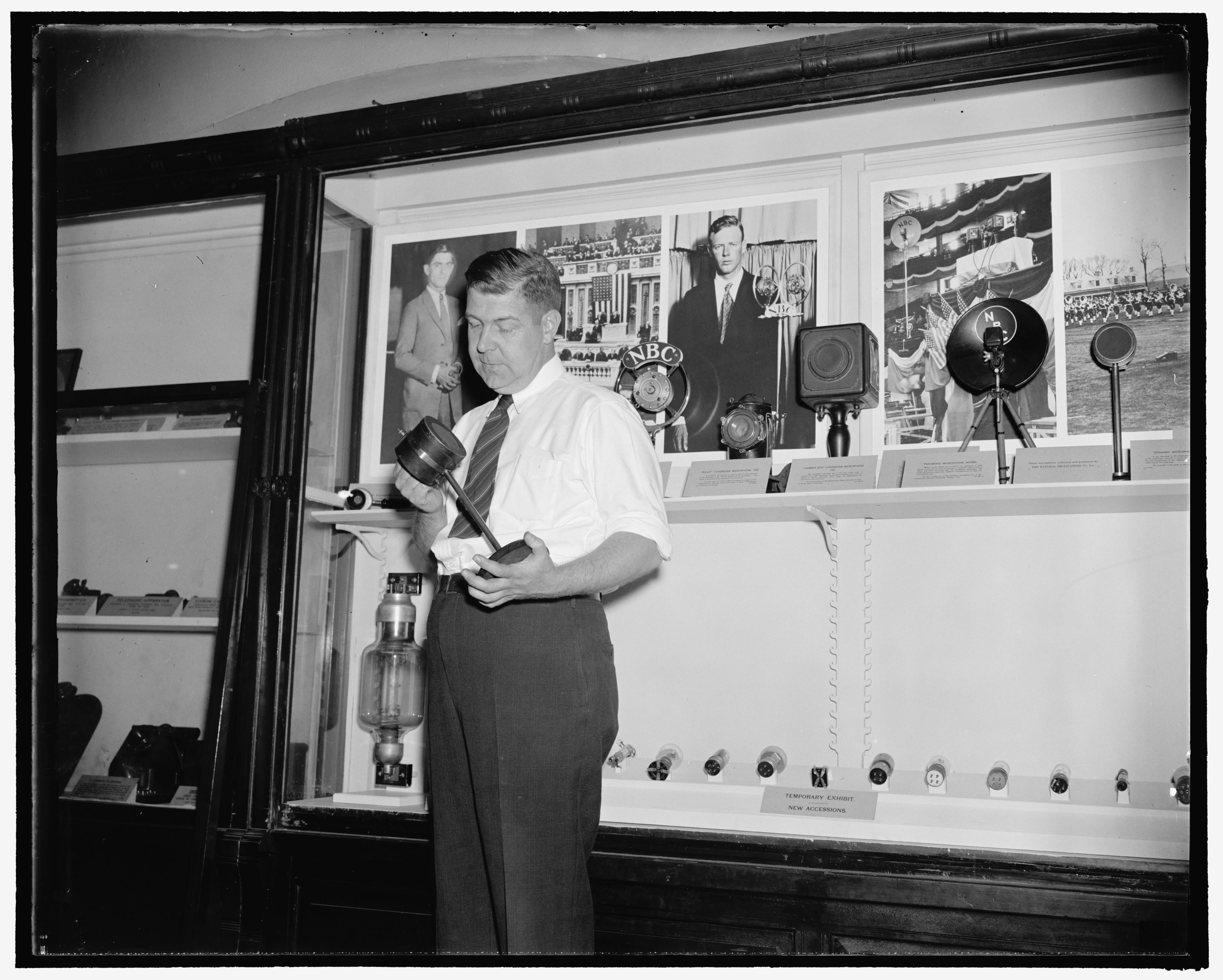 Harris & Ewing - Library of Congress
This tomato can microphone, held by Fred C. Reed of the Smithsonian Institution, was used to announce returns in the 1920 Presidential election.

KDKA’s creation of a new industry did not take long to start to profoundly affect the nation. One of the first fields that radio changed was politics. The first broadcast was of the Harding-Cox election returns, but more than that, radio gave a way for politicians to reach out to and communicate with their constituents. It wasn’t long before politicians took advantage of this; Representative Alice Robertson and Secretary of Commerce Herbert Hoover became the first politicians to reach listeners by radio in January 1921 via KDKA, only months after it started broadcasting. On March 4, 1921, KDKA aired the first presidential inaugural address over the radio, when Warren G. Harding delivered his message to the nation. The significance of this event helped spread radio’s popularity outside of the Pittsburgh area. Papers across the nation ran headlines in the months leading up to the event announcing “wireless telephone to convey Harding’s address to many,” Kansas City Star. Historian Susan J. Douglas notes that people thought radio would improve politics. “We may even become more thoughtful about the selection of our presidents,” and now candidates show “a real personality” instead of “a political abstraction.”

operators were treated to the action of the ring battle with all the realism of each blow and each bit of ring strategy enacted the instant it occurred… [radio] brought the sounds of the conflict, the clang of the gong and the shouts of the fans.

The success of this local fight’s broadcast prompted Westinghouse to continue their sports broadcasting. July 2, 1921 – KDKA broadcast the World Heavyweight Championship between Jack Dempsey and Georges Carpentier for the first time. August 5th the same year – the first ever play-by-play of a baseball game was sent over the airwaves by KDKA as the Pirates beat the Phillies, and on October 8th – Pitt’s football win over West Virginia became the first football game broadcast, all by KDKA. Sports broadcasting became a staple of radio stations, and cemented the industry in America. 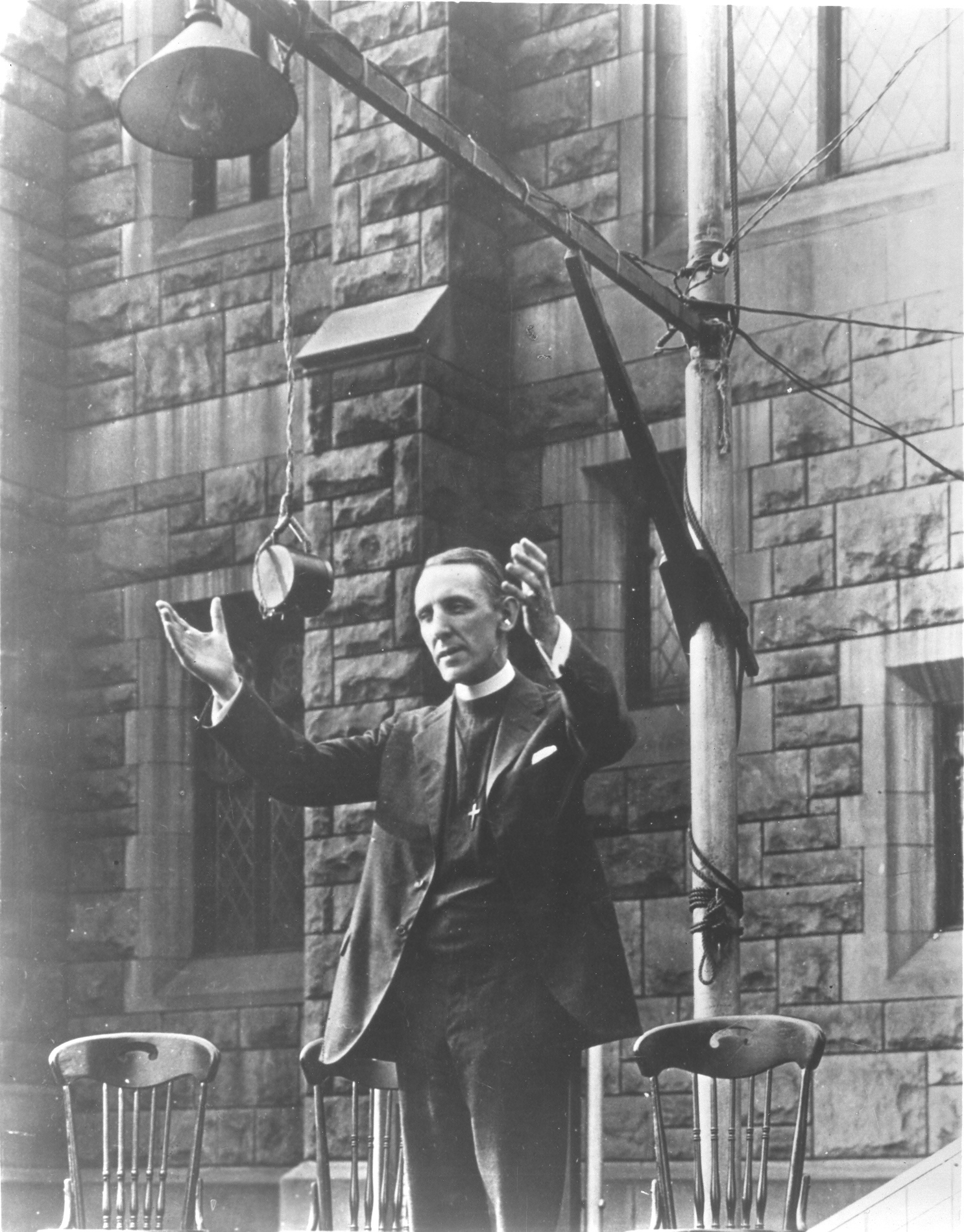 KDKA Radio, Pittsburgh
One of the local clergy uses KDKA's airwaves to preach to the faithful in a 1923 broadcast.

Thanks to Levering Tyson, a Columbia University faculty member, the educational world was also hit by radio’s influences. According to Hugh Richard Slotten in Radio’s Hidden Voice, upon hearing KDKA’s first broadcast, Tyson said he “hot-footed it to Pittsburgh.” Tyson lead the way for universities to establish their own licensed stations. Educators used radio as means of fund-raising and for improving transmitter and receiver technologies. Some institutes even began to offer courses over the radio. The University of Nebraska’s WFAV started offering credit courses via radio in 1922, and many others followed suit. Herbert Hoover called these broadcasts “a step towards the realization of the true mission of radio,” as quoted in Radio’s Hidden Voice. This practice paved the way for today’s online degree programs that allow many people the opportunity to further their education.

Besides broadcasting sports and politics, KDKA also offered public services to its audience, including: church services, market reports, weather forecasts and crop information. One of KDKA’s first regular programs was the Calvary Episcopal Church service. Radio offered a means to reach a larger community including those who were isolated from much of the nation in rural areas. These rural communities became a primary audience during radio’s development, as they eagerly awaited news from across the nation. Radio broadcasts allowed news to instantly reach across the nation. The Department of Commerce set up a separate frequency, 450 meters, for stations to broadcast public service announcements. KDKA became the first station to broadcast government market reports on May 19, 1921. By providing vital information on weather and crop and market conditions, these services became an important part of rural life. Similar services are maintained today by the National Weather Service, which broadcasts weather conditions and advisories. 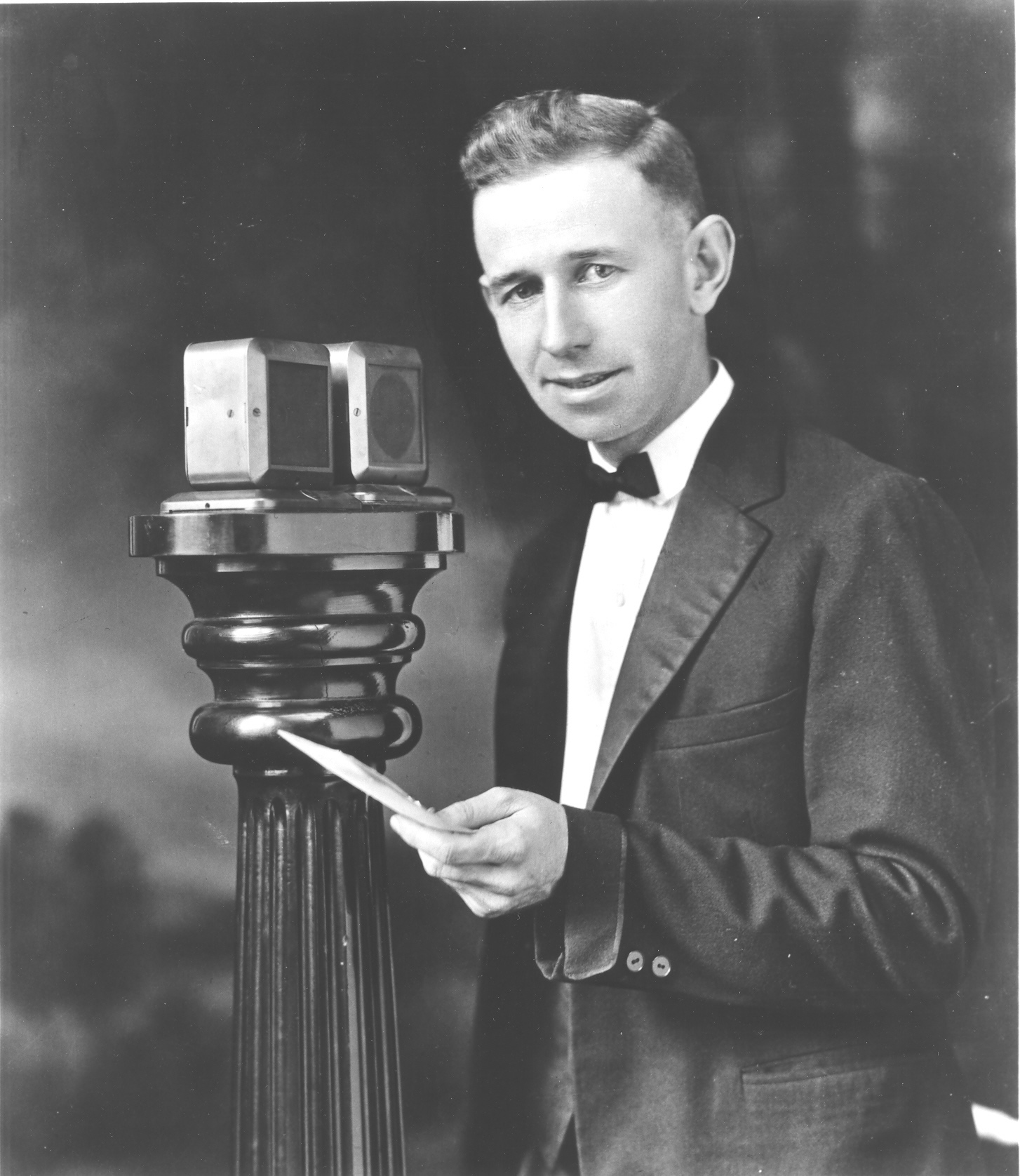 KDKA introduced radio to the world as more than a means of communication, a military tool and a hobby of a few ham operators, but as a way to instantly reach thousands of people across vast distances. The importance of radio to what the world is today is clear. Radio connected America, and gave its people a feeling of solidarity. The entertainment programs and public services broadcast by KDKA and its contemporary stations influenced every aspect of American life from political campaigns to harvest times to university programs. S.H. Kintner, KDKA broadcaster, summarized what radio had become best in his broadcast on December 20, 1922:

Fellow patrons of KDKA: Now that we are assembled again in KDKA’s unlimited theater, where rear seats are hundreds of miles from the stage and where the audience, all occupying private boxes, can come late or leave early without embarrassing the speaker or annoying the rest of the audience—let us consider for a few minutes…

… what the world would be like if Westinghouse had never taken those first steps to establish KDKA. What if radio never fulfilled its potential to reach more than a few hundred listeners? KDKA changed radio, and radio changed the world. It paved the way for other technologies such as television and the internet, and it all started in a roof top shack in Pittsburgh, Pennsylvania.

The Center would like to thank KDKA Radio, Pittsburgh for its assistance in illlustrating this article. 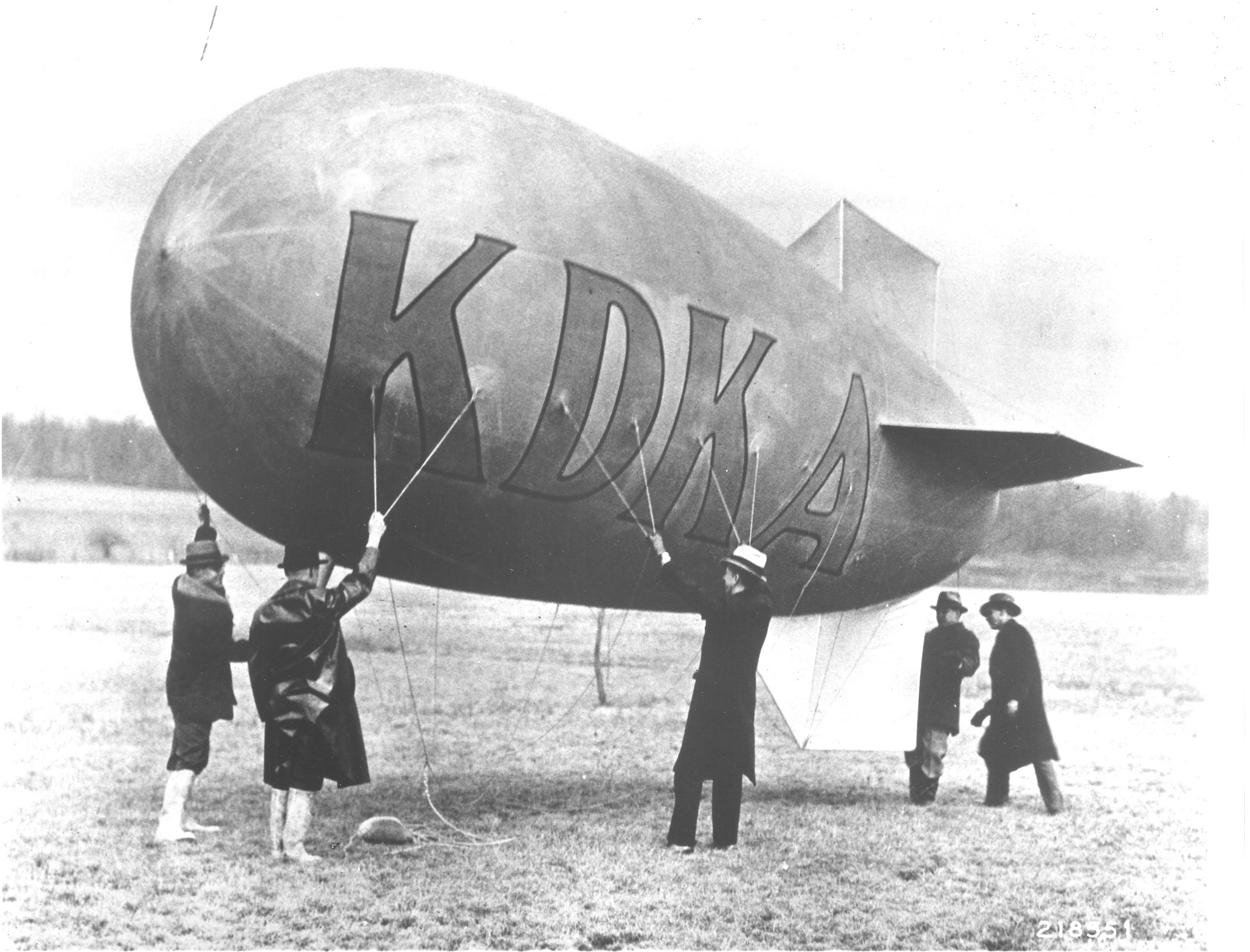 KDKA Radio, Pittsburgh
In the early days, KDKA flew a blimp with an experimental antenna aboard. 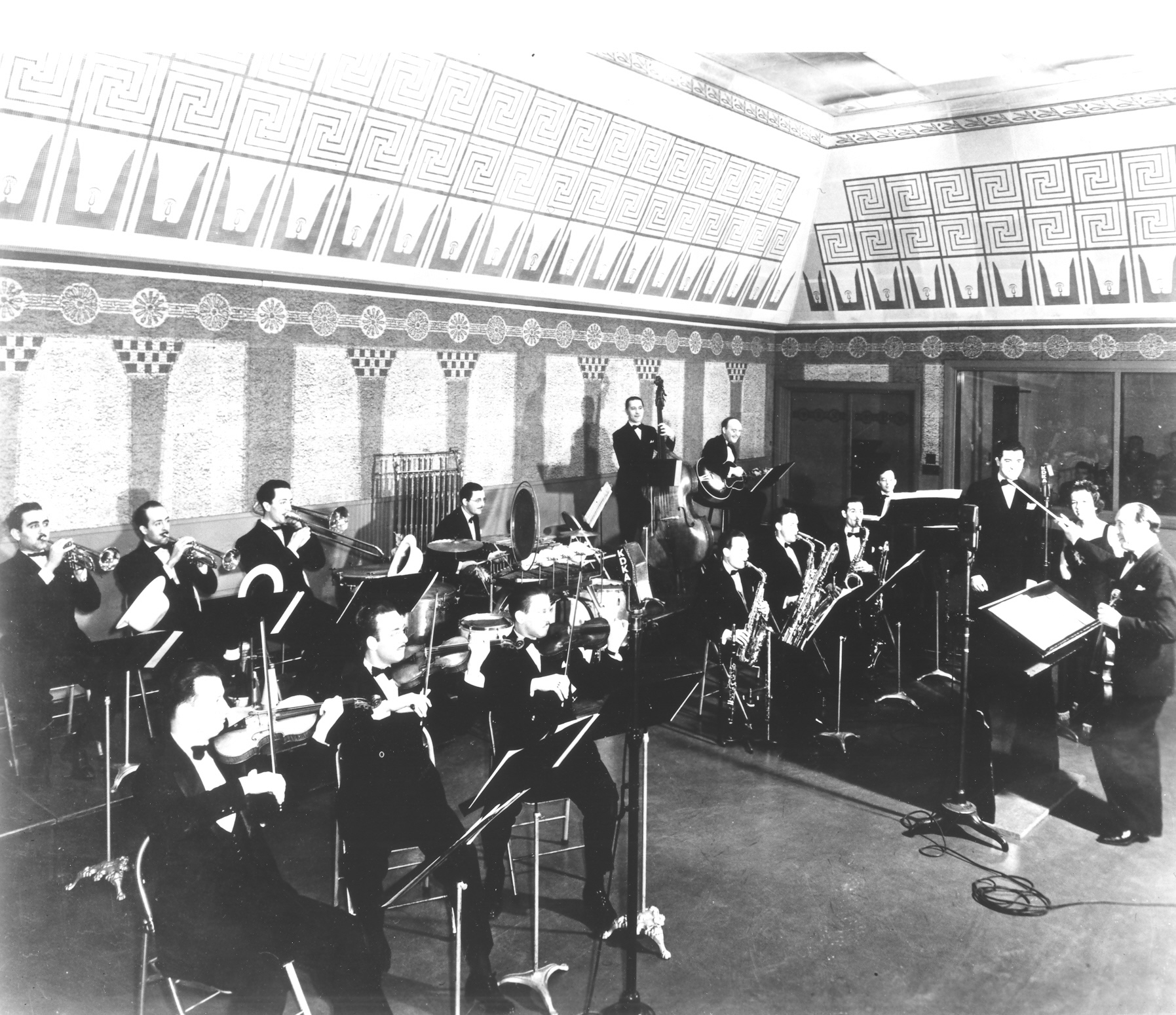 KDKA Radio, Pittsburgh
The KDKA Orchestra under the baton of Maurice Spitalny. 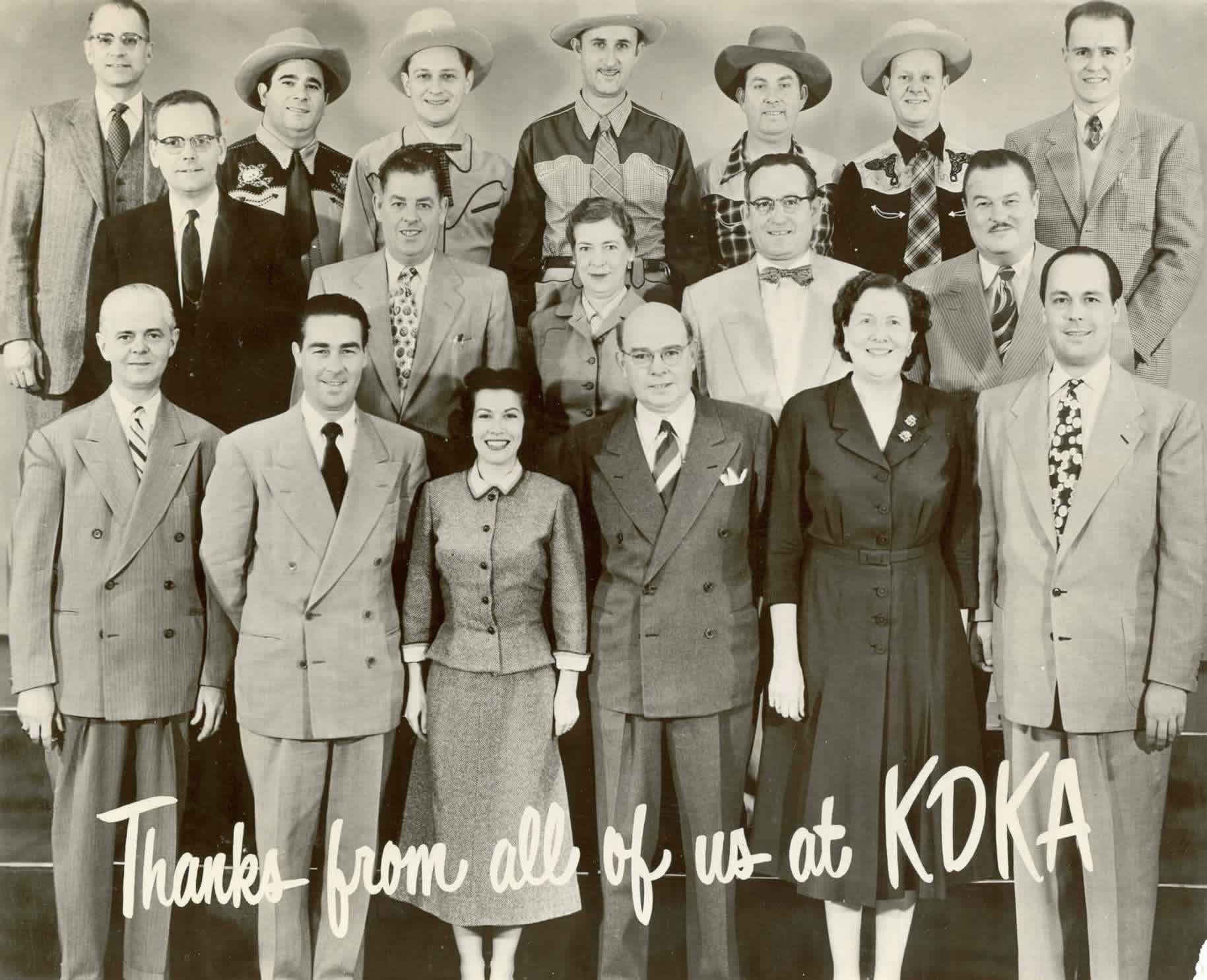 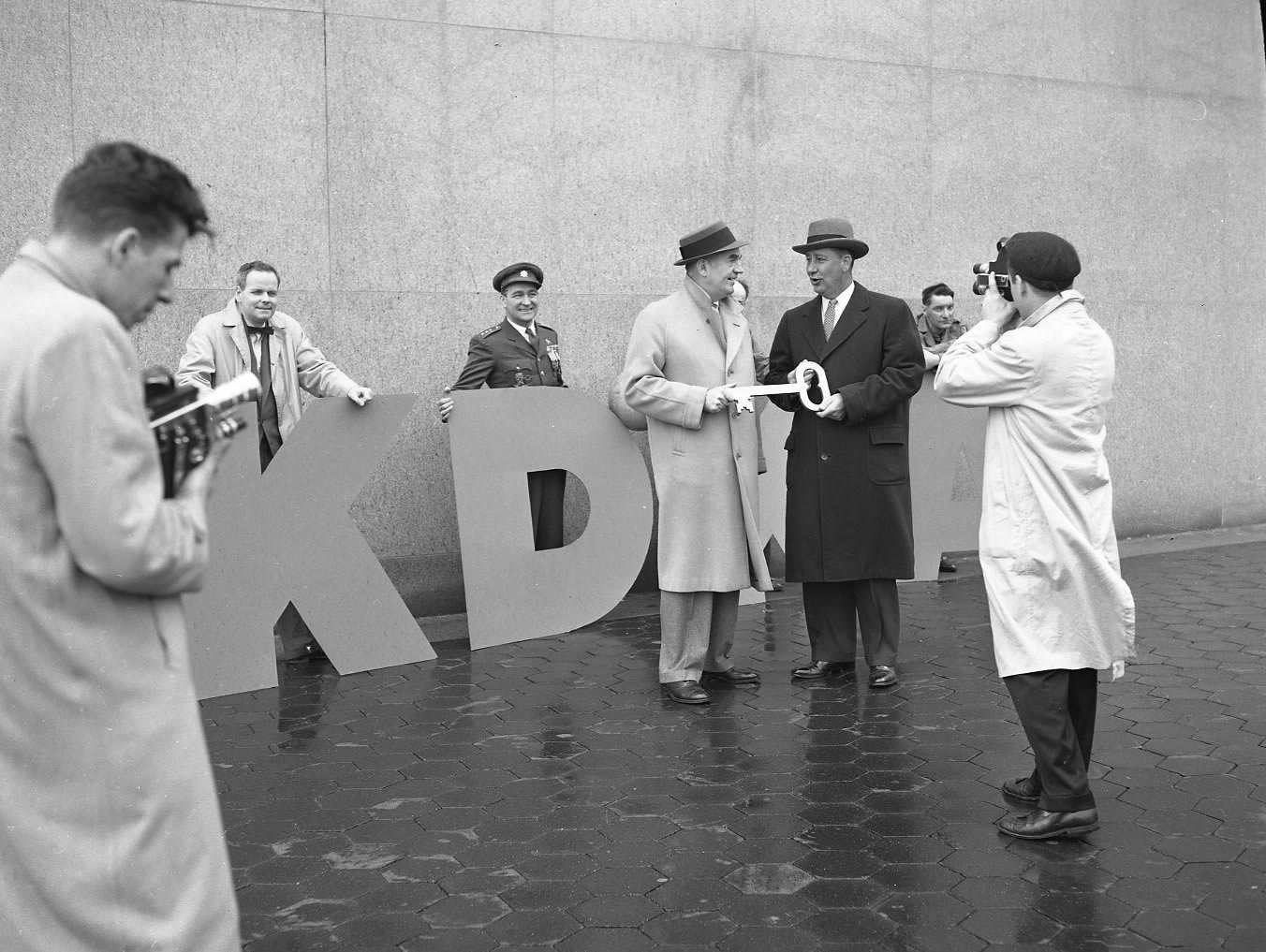 KDKA Radio, Pittsburgh
KDKA is welcomed to its "new" facility at Gateway Center with a giant key.
County:
Allegheny
Fall 2010